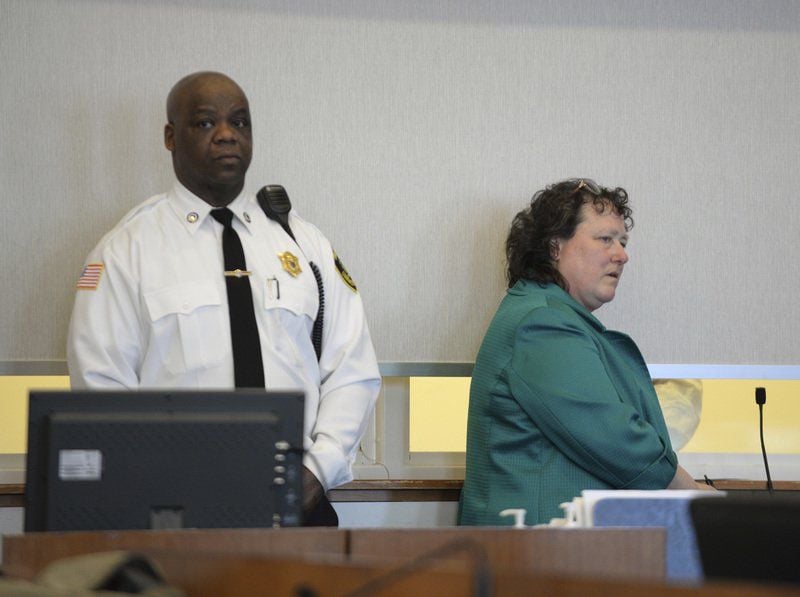 PAUL BILODEAU/Staff photo. Defense attorney Rebecca Whitehill represents Stephen Chastain from Salem, hiding behind the window, who was arraigned in Salem District Court on the charges of attempted murder, strangulation and other assault charges on Thursday. March 31, 2016 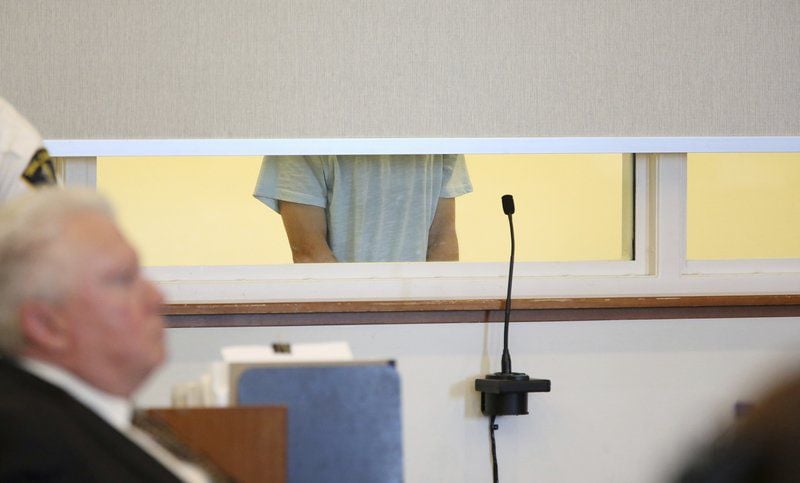 Behind the partly opened shade is Xavier Collazo, 19, of Roxbury, during his arraignment in Salem District Court in April for the shooting death of Benjamin Magee in Salem.KEN YUSZKUS/Staff photo 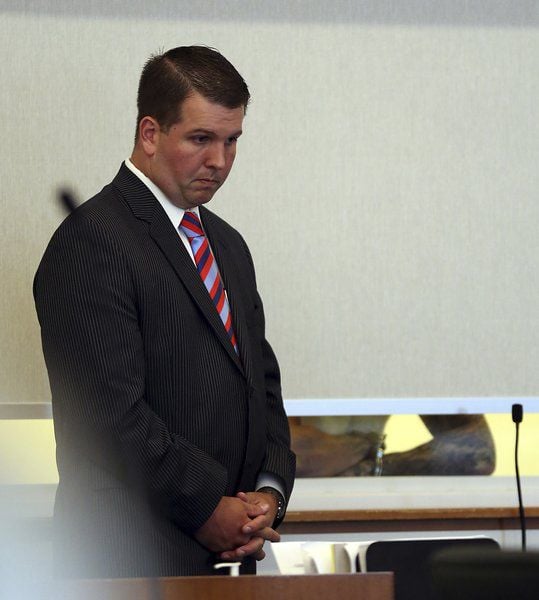 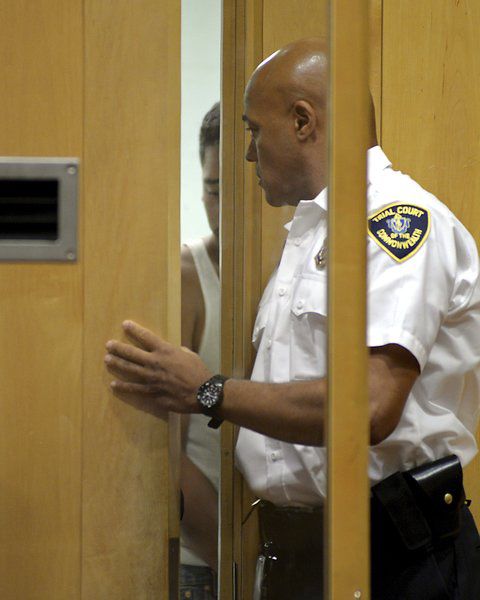 RYAN HUTTON/ Staff photo One of two defendants is briefly seen in the holding room of Lawrence District Court on Monday after a judge agreed that the pair charged with various felonies could remain hidden from view during their arraignment. Francisco Burgado, 30, of Manchester, N.H., and Jonathan Colon, 32, of Derry, face various charges after two armed robberies, a shooting of a Lawrence man and a police chase from Lawrence to Methuen late Sunday night. 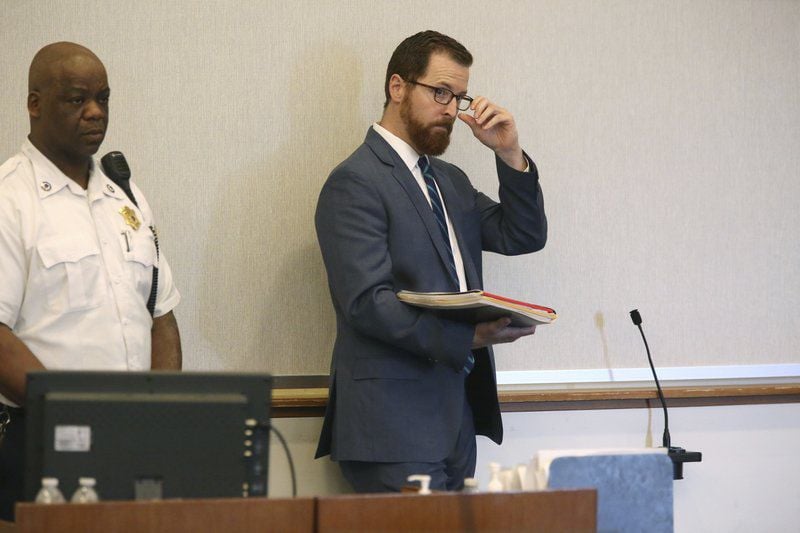 PAUL BILODEAU/Staff photo. Defense attorney Rebecca Whitehill represents Stephen Chastain from Salem, hiding behind the window, who was arraigned in Salem District Court on the charges of attempted murder, strangulation and other assault charges on Thursday. March 31, 2016

Behind the partly opened shade is Xavier Collazo, 19, of Roxbury, during his arraignment in Salem District Court in April for the shooting death of Benjamin Magee in Salem.KEN YUSZKUS/Staff photo

RYAN HUTTON/ Staff photo One of two defendants is briefly seen in the holding room of Lawrence District Court on Monday after a judge agreed that the pair charged with various felonies could remain hidden from view during their arraignment. Francisco Burgado, 30, of Manchester, N.H., and Jonathan Colon, 32, of Derry, face various charges after two armed robberies, a shooting of a Lawrence man and a police chase from Lawrence to Methuen late Sunday night.

Police say the witness was “1,000 percent” certain that the photo she’d chosen out of an array was that of the man who had attacked her in her home.

And the defendant had confessed, said the prosecutor.

Still, his attorney wanted to keep defendant Peter Turco hidden from view of television and newspaper cameras inside Salem District Court that day. Lawyer Thomas Gately later confirmed that he’d cited a “possible” identification issue as grounds for his request.

And without revealing his reasons why, Judge Matthew Machera granted the request, telling a court officer to lower a screen inside the courtroom to shield Turco.

He’s not the only Massachusetts judge to make such a finding in recent months, with more defendants being hidden from the media and the public, despite the fact that cameras have been allowed in courtrooms for 35 years.

“I’ve heard a lot about this happening around the state,” said Robert Ambrogi, an attorney and executive director of the Massachusetts Newspaper Publishers Association.

There are other examples from throughout Essex County and the Boston area:

On the day before Turco’s arraignment, Lawrence District Court Judge Holly Broadbent granted a request from a lawyer for Francisco Burgado Jr., 30, charged in a pair of robberies, a shooting and a police chase, to let him hide behind a door from cameras — then also agreed to impound Burgado’s police booking photo, normally a public document, for 60 days.

In May, Judge Robert Brennan allowed Thomas N. Phillips, 33, charged with stabbing four people inside and outside a Beverly bar, to hide from cameras, after being told that some witnesses were struggling to identify Phillips because he apparently had dyed his hair. But as in the Collazo case, police had already released a photo of Phillips.

In April, Judge William Fitzpatrick granted a request to keep Xavier Collazo, 19, of Roxbury, hidden behind a screen during his arraignment in the murder of Benjamin Magee, 26, of Salem, at the request of his lawyer, John Morris. Outside of court, Morris said he didn’t know Collazo’s booking photo had already been released by both Boston and Florida police.

And in March, prosecutors were the ones to request that Stephen Chastain, 24, be allowed to hide from view of cameras awaiting his arraignment in a stabbing at Salem State University, citing concerns that dissemination of his photo would taint ongoing witness interviews. In that case, Fitzpatrick allowed a lawyer for The Salem News to argue against the request but then allowed Chastain to hide.

Cameras have been allowed in Massachusetts courtrooms since 1981.

“It’s been routine for years for defendants at arraignments to be photographed,” Ambrogi said.

But a recent wave of publicity and court rulings concerning wrongful convictions based on faulty identifications, and studies that call into question the reliability of eyewitness accounts, has led many lawyers — on both sides — and judges to err on the side of caution.

“There is a greater concern for the risk of an incorrect identification leading to a wrongful conviction,” said Jonathan Albano, an attorney for The Salem News, The Eagle-Tribune and other newspapers. “I get all that.”

“In theory it can lead to mis-identification, but in theory it can also lead to evidence helpful to the defense,” said Albano. “It pushes things too far to say in order to avoid mistakes we will keep a defendant hidden.”

The Essex District Attorney’s office has made one request to shield a defendant in court, in the Salem State case, but also has not opposed most of the defense requests when they’ve been made.

“It’s definitely a case-by-case thing for us,” said Carrie Kimball Monahan, a spokeswoman for the district attorney.

“If we have not had an opportunity to do the appropriate identification steps prior to arraignment, we are going to ask to have the defendant shielded in order to protect our investigation,” Kimball Monahan said. “If a person is being asked to make an identification and someone has recently appeared on the front page of the newspaper, that is a tainted ID and that makes it harder ultimately to prosecute the case, and our highest priority is to follow the law and effectively prosecute cases.”

Erika Gully-Santiago, a spokeswoman for the state Trial Court, did not respond directly to questions about whether judges are being trained how to handle such requests.

“Judges must ensure that a defendant receives a fair trial, and that witnesses who will eventually testify at trial are not influenced by news media reports of court proceedings, which could affect the impartiality of the trial,” said Gully-Santiago in a written statement. “In some cases, erroneous eyewitness identifications occur, as do false confessions, and either one can lead to a wrongful conviction.”

She said that in addition to several Supreme Judicial Court rulings on identification, judges have been given new jury instructions that specifically address concerns about the reliability of eyewitness identification.

Kimball Monahan said a recent investigation into a shooting in Lynn was compromised when a newspaper there published a photo of a man who was charged in an unrelated crime but also was a suspect in the shooting.

“A witness was asked if he recognized the guy and he said, ‘Yeah I saw him on the front page.’ That’s not going to hold up. We can’t use that as an identification because he’s seen that guy on the front page. That’s why we do it. We’re not doing it out of sympathy for the defendant. When we move to conceal a defendant we are doing it because we’re protecting the integrity of an investigation.”

Salem defense attorney Mark Barry said he recently won a case based on a lack of proper identification procedures by police.

“This will evolve,” said Barry. “The police will get in the habit of doing what they’re supposed to do,” by obtaining an identification from a witness prior to trial.

But when that hasn’t been done, Barry acknowledged, lawyers are going to use it. And it’s not just a matter of keeping a client out of the spotlight.

Witness identification can also be tainted, he suggested, by the presence of a witness in the courtroom.

Defense lawyers also have to worry about being accused of “ineffective assistance of counsel” when their clients appeal.

“Some appeals lawyer is going to look and ask ‘Why didn’t you ask that the screen be brought down?’” said Barry. “We’re all covering our butts now.”

He acknowledged that much of the concern is speculative.

But for First Amendment lawyers like Ambrogi, the concern about potentially violating defendants’ rights is overshadowing the rights of both the press and the general public to observe court proceedings.

“The SJC has said that the news media has a right to cover arraignments,” said Ambrogi. “We have a rule on cameras in the courts that gives us the right to have cameras at arraignments.”

While little can be done about defendants who “artfully dodge” around the courtroom to avoid being on camera, “for a judge to block a specific defendant’s face, this is a First Amendment issue,” he said.

And both Albano and Ambrogi are concerned that many judges aren’t following the legal standard for making such rulings.

“For a judge to close down media access, the judge would have to make a finding that there is a substantial likelihood that a defendant’s right to a fair trial would be prejudiced in some way,” said Ambrogi. “The question is whether judges are carefully analyzing these requests.”

Not all judges feel the same way about such requests.

Jamad Thomas, 18, a New Jersey high school student athlete charged with rape during a recruiting visit to Merrimack College in North Andover, was allowed to hide behind a door during his initial arraignment in Lawrence District Court.

But when he appeared last month for arraignment in Salem Superior Court following his indictment, Judge Thomas Drechsler took a different view. Thomas, free on $20,000 cash bail, was waiting in a conference room while his attorney tried to convince Drechsler to waive Thomas’s appearance.

A prosecutor objected, telling Drechsler that identification was not an issue in the case. The judge made a ruling agreeing with the prosecutor, and then ordered the lawyer, “Bring him in.”