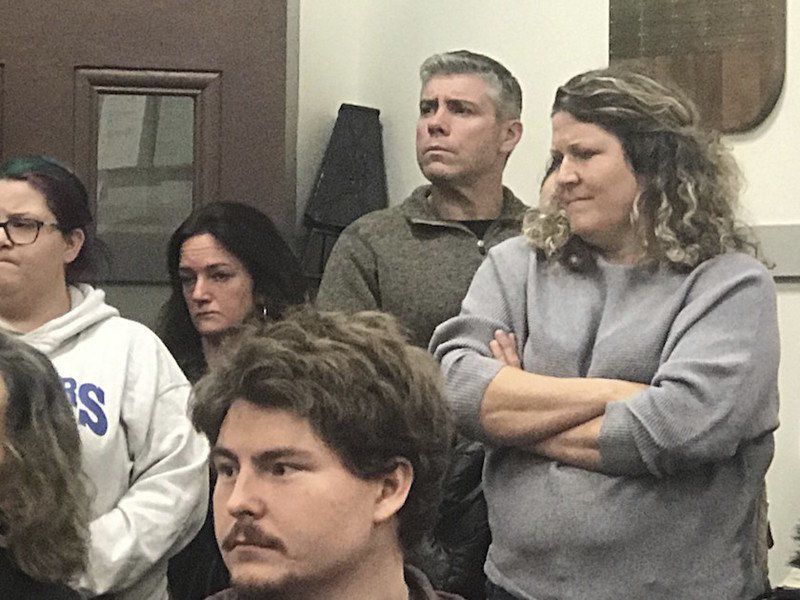 Brittany Dupont-Raesly awaits her chance Tuesday night to present the Danvers Board of Selectmen with a petition featuring 900 names. 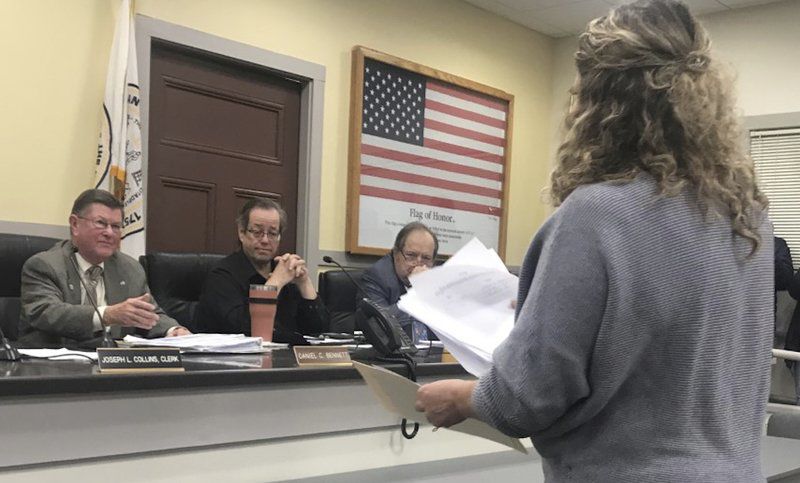 Brittany Dupont-Raesly awaits her chance Tuesday night to present the Danvers Board of Selectmen with a petition featuring 900 names.

DANVERS — A crowd jammed into the hearing room in Town Hall Tuesday night to support Dean and Deluca, a pair of pet goats who are threatened with banishment from their fenced-in enclosure because they live in a part of town that does not allow goats according to zoning.

The family that owns the furry brown barnyard critters went before selectmen with a petition of 900 signatures asking the town to change its zoning rules so Dean and Deluca can stay.

The family is asking for a zoning change at an upcoming February Special Town Meeting.

While selectmen and the town manager said they were sympathetic to the goats' plight, which appears to be due to a quirk in town zoning on where farmyard animals are allowed, they said there may not be enough time to do so with the warrant closing on Dec. 13, and with the need to hold a public hearing before the the Board of Health.

The reason for the expediency is Timothy Raesly and Brittany Dupont-Raesly, the owner of Daily Harvest Cafe on High Street, recently lost a legal appeal in Land Court to keep Dean and Deluca at their home at 109 Hobart St.

The goats are forbidden because the Raeslys home sits in an Residential I zoning district where animal husbandry is not allowed.

Add to that the fact that goats and other animals are allowed one street over in different residential zone.

Last year, a neighbor's complaint to Building Inspector Richard Maloney led him to deem the keeping goats violated a prohibition of animal husbandry in Residential I zones. The Raeslys appealed Maloney's decision to the Zoning Board of Appeals, and this board upheld the decision.

After the meeting, when asked about whether she would appeal the Land Court decision in Superior Court, Dupont-Raesly said that was their intent, but then they wanted to pursue the zoning change. With the timing of such a change in doubt, she said she would consult with her attorney, Nancy McCann.

"Obviously, I will get counsel from her and see where it's going to go," she said.

During the meeting, Dupont-Raesly said she and McCann had been consulting with the Danvers Planning Department regarding a zoning change.

"Rather than proposing our zoning amendment, were were advised after meetings with town staff, that the town planning department would propose a zoning amendment to allow the keeping of farm animals in the residential zoning districts, subject to very strict Board of Health regulations," Dupont-Raesly said.

She was told such a change was on track for the February Special Town Meeting.

Last week, she said McCann was told by Land Use and Community Services Director Aaron Henry that the town manager had asked that the zoning change be held back.

"This was a shock to myself and my family," Dupont-Raesly said.

She told the board that such an article would handle the keeping of farm animals in the same way that Peabody, Beverly, Salem and Middleton do. She urged the warrant article move ahead for the February Special Town Meeting.

Dan Bennett, the chairman of the Board of Selectmen, had initially signaled there would be no discussion during "new business," but then he asked Town Manager Steve Bartha about whether zoning language had been prepared.

Bartha said that a 2014 Special Town Meeting considered a similar question, and took no action, so the zoning language was a straightforward.

The piece that falls outside Town Meeting's purview would be Board of Health regulations, and while the board has been working on a model regulation, it still has to hold a public hearing.

Bennett said he would work with Bartha "to expedite as much as we can. Even though the board can extend the Dec 13 deadline to close the warrant, they still had to wait for the Board of Health to hold its hearing.

Selectman Bill Clark, said the problem arose when the town transitioned its zoning rules from a written document to one with charts and graphs. He blamed an individual "who has long since left the town of Danvers," for several omissions in the transition. Before this transition, farm animals were restricted but not prohibited in Residential I.

"I feel extremely upset about this situation," said Clark, because he said the person who lived in the Raelys home before they did "was driven out of town for this same reason. She wanted six chickens, and she wasn't allowed to have it, and she moved away."

He also blamed a resident who, about 20 years ago, has since died, used to keep a backyard full of rabbits and who refused to move the animals away from his neighbors. People became upset and rules for keeping animals in town changed.

He lamented that Danvers, which was known as a farming community, has such restrictions.

"Now it's kind of ridiculous that you can have chickens and bees in Manhattan, you can have it in Boston, but you can't have it in Danvers, the home of the Danvers carrot and the Danvers onion and many other things," Clark said. He urged the the town take the matter up in February, and he also offered to keep Dean and Deluca at his Hobart Street farm if they run into legal trouble.