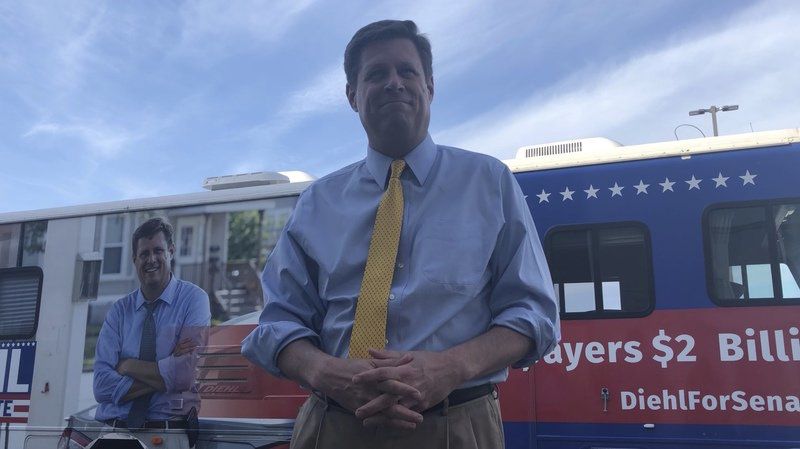 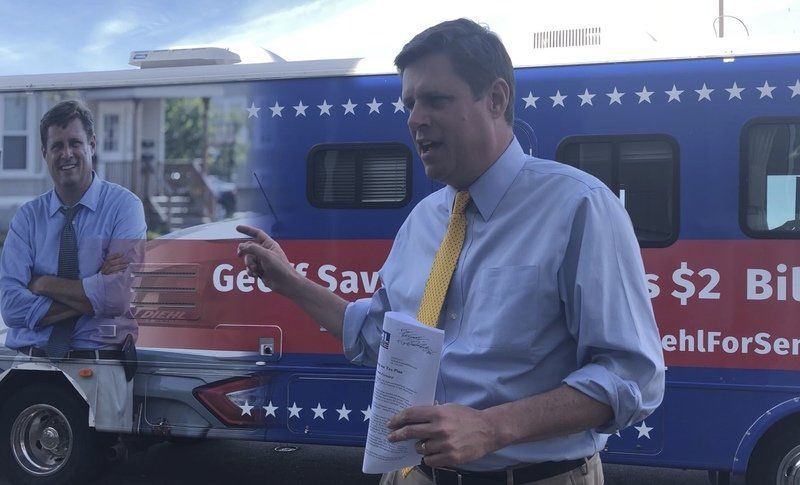 PEABODY -- State Rep. Geoff Diehl, a Republican running for U.S. Senate, came to Peabody in a big red, white and blue bus with a message – He can do better than Sen. Elizabeth Warren.

"I think Elizabeth Warren made a big mistake when she voted against the tax reform plan," Diehl said. "For me, as a small business owner and serving in the legislature for eight years, I've seen the effect of when you keep taxes low, you're able to put more money into the hands of businesses that give it to their employees."

Diehl spoke of how he led a grassroots ballot campaign to repeal automatic gas hikes, prevailing with 53 percent of the statewide vote.

"If Senator Warren had her way, 4 million people would not have received bonuses, benefit increases or tax breaks," he said. "On the other hand, I have spent my time as a legislator working to put more money in people's wallets while Senator Warren has spent her time selling books."

Diehl claims that he will be more accessible by offering a mobile office that will travel to Peabody and elsewhere in the state to meet with constituents. When the U.S. Senate is not in session, he pledged to travel the roads of Massachusetts and hold town meetings throughout the entire year.

"Elizabeth Warren spends more time going around to other states that seem to matter more to her like Ohio," Diehl said. "Obviously she wants to run for president and we think that Massachusetts deserves a senator that's going to focus on them every single day."

Every day since the convention, Diehl has been on the road as a part of his "First and Forward" tour around the state. The Whitman resident says he plans to continue his tour until the November elections.

Diehl started in Springfield at noon on Tuesday, followed by Fitchburg at 3 p.m. and the Northshore Mall in Peabody at 5 p.m. He was later scheduled to attend Billerica's Town Meeting.

Outside Chipotle at the North Shore Mall, Diehl spoke about why residents should vote for him rather than Warren.

"I think people are coming around to see it's the person, not the party," he said. "When you listen to people and work around the clock for them, they understand that you truly care. Senator Warren put our state in the rearview mirror once she got elected...The people deserve a full-time Senator, not a part-time author, part-time presidential candidate and part-time legislator."