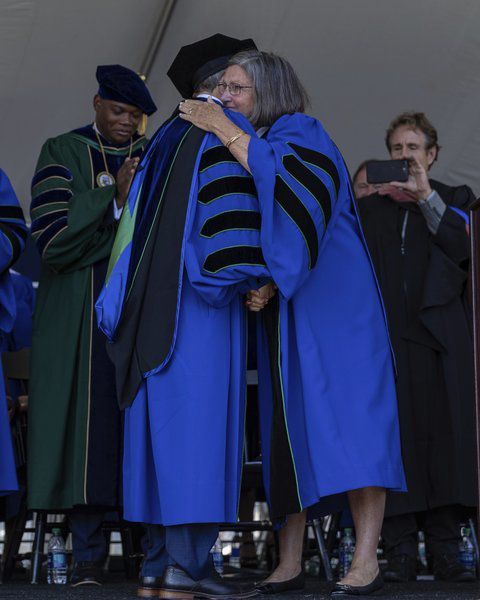 Courtesy David Le/Endicott CollegeDr. Steven R. DiSalvo, President of Endicott College, gets a hug from Cindy Merkle, Chairwoman of the Board of Trustees during Friday's inauguration ceremony. 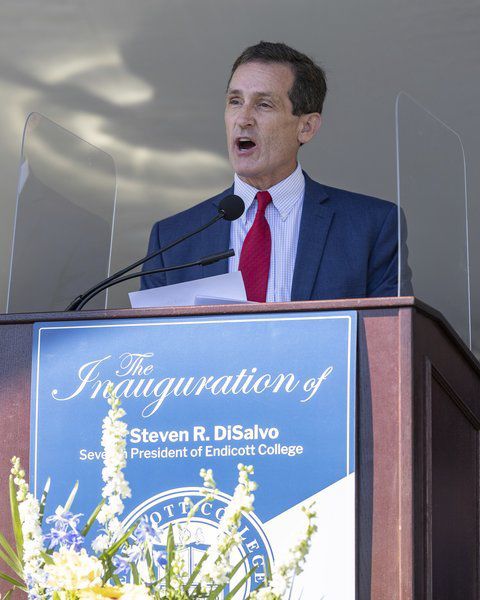 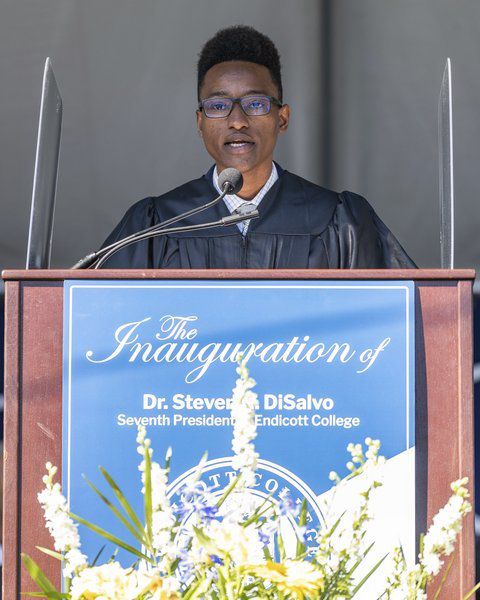 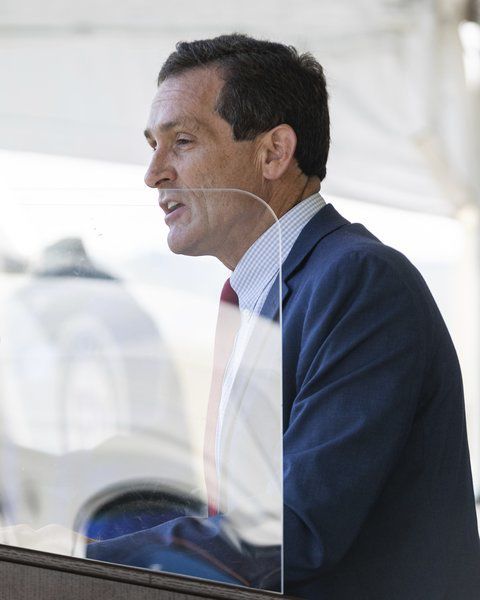 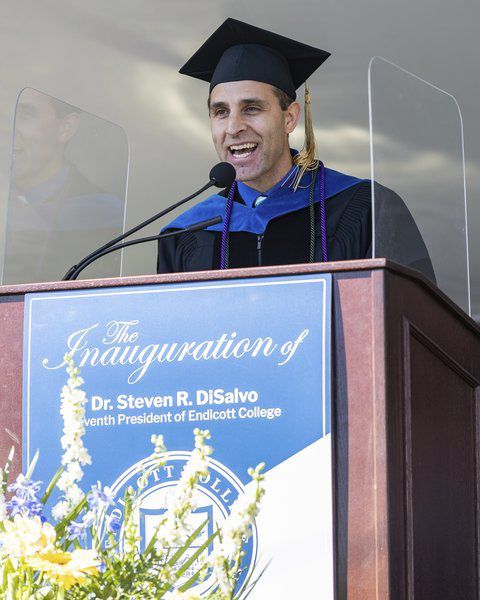 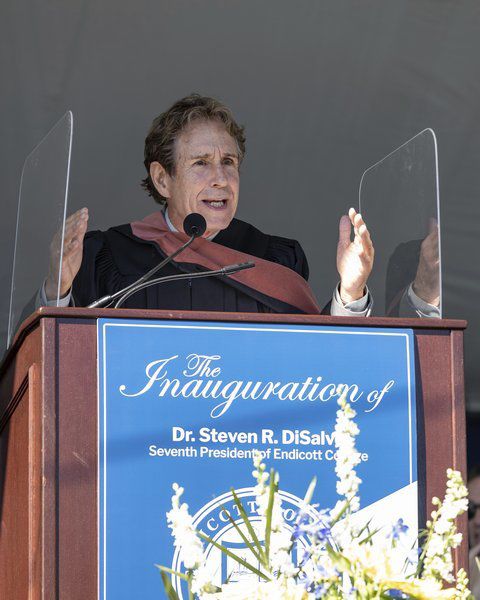 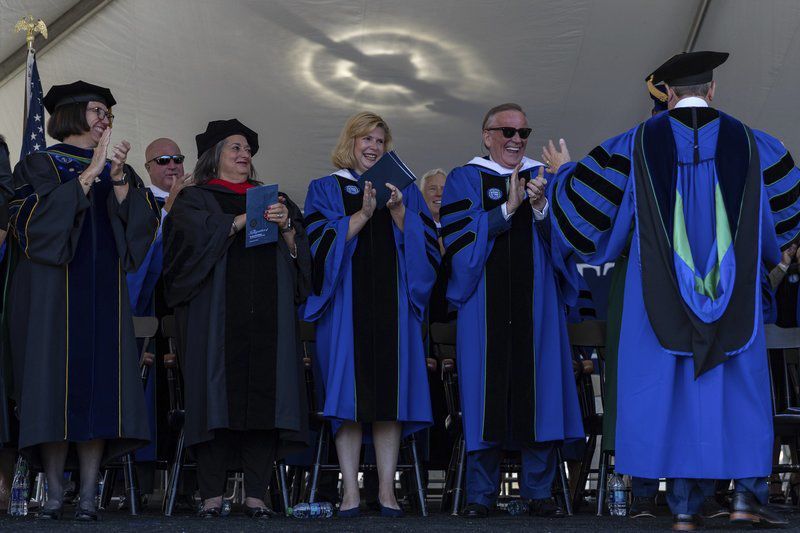 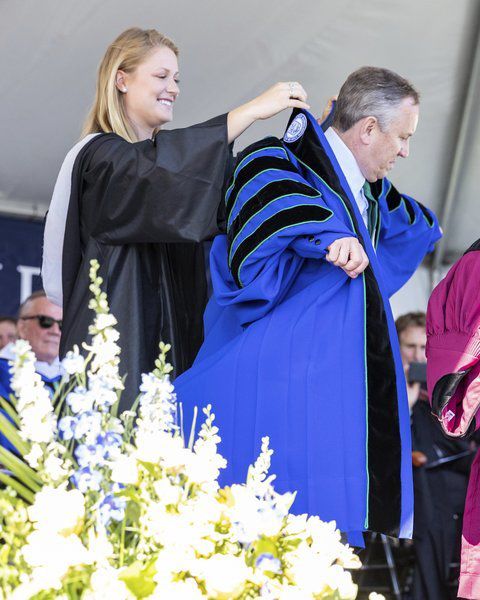 Courtesy David Le/Endicott CollegeDr. Steven R. DiSalvo, President of Endicott College, gets a hug from Cindy Merkle, Chairwoman of the Board of Trustees during Friday's inauguration ceremony.

During his inauguration ceremony before an estimated crowd of 2,200 people at the school's outdoor sports stadium, DiSalvo called Endicott "the best-kept secret, and I don't want us to be a secret anymore."

"We're more than a pretty place," he said.

DiSalvo, 57, the former president of Saint Anselm College, was inaugurated as the seventh president in the history of Endicott College. It was the first inauguration in more than 30 years at the school, which was led by Richard Wylie for three decades before he died in 2018. DiSalvo was named president in March and began the job July 1.

Wylie transformed Endicott from a two-year school for women to a four-year co-educational college with dozens of new buildings. DiSalvo paid tribute to Wylie's legacy, but also laid out his own goals to broaden Endicott's reach beyond the local area.

DiSalvo said he would like to expand study abroad opportunities for students outside the school's current programs in Madrid and Ireland and increase student internships "beyond a 50-mile radius."

"With this initiative, student cohorts will be able to seek internships from Wall Street to Capitol Hill, from the Windy City to the Big Easy, from Silicon Valley to Faneuil Hall," he said. "And as our students make their presence known among the best companies, labs and schools, they will bring with them the Endicott story, continuing to expand our Endicott brand and reputation."

"We have quite a story to tell the world and we will do just that," DiSalvo added. "Our light will no longer remain under a bushel basket. It will shine brightly for all to see."

DiSalvo acknowledged that ambitious plans cost money, which led him to what he called "the elephant in the room — affordability." He said he wants to keep Endicott's "price point" low, and vowed to work with elected officials to seek an exemption from anti-trust laws so that colleges can work together to set reasonable prices.

DiSalvo also said student loan repayments should be contingent on income, so students can still have disposable income to "save for a car, or a home, or to simply build a life."

DiSalvo announced a plan to launch what he called Endicott's "first-ever comprehensive capital campaign" to raise money for new programs, centers, campus beautification projects, student scholarships and to grow the school's endowment, which was $95.8 million as of June 30.

"We will grow the endowment to a level never seen before at this institution," he said.

DiSalvo said he would like to see a "more diverse and inclusive" student body, faculty and staff. "I'm sure that many of you share my belief that the college campus should be reflective of the world in which we live," he said.

DiSalvo also talked about his upbringing in a middle-class section of Queens in New York City, saying his parents — who were sitting the front row and will celebrate their 60th anniversary next month — worked hard so that he could become the first in his family of his generation to attend college.

The ceremony was attended by delegates from 67 colleges and universities from around the country, as well as hundreds of Endicott students. Speakers included Elms College President Harry Dumay; actor John Shea, whose daughter attends Endicott; Beverly Mayor Mike Cahill; and student Rachid Sow.

John Silvia, a sophomore at Endicott College, said he liked the fact that DiSalvo addressed the question of affordability in his speech. Silvia also said he supports the idea of trying to attract students from a wider area.

"Right now we have a very New England-based study body," Silvia said. "I'm from Somerset (Mass.) and I would love to see kids that come from across the United States and other countries."

Junior Alexa Pretkelis said she appreciated how DiSalvo acknowledged the legacy of Wylie, who she said was a "huge part of this campus." She also liked the idea of raising Endicott's profile beyond the local area.

"I'm from Illinois and when I say I go to Endicott, nobody knows what it is," she said. "Maybe someday they will."