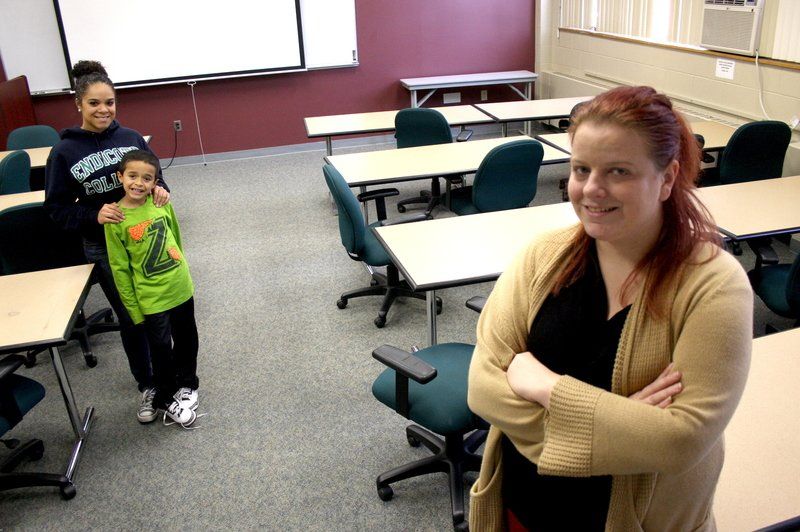 DUSTIN LUCA/Staff PhotoEndicott College's Keys to Degrees program, directed by Autumn Green (right), gives single parents a shot at college life while supporting their parenting obligations. One of the students in the program is Tianisha Torres, 22, with her 7-year-old son Javien Maldonado. 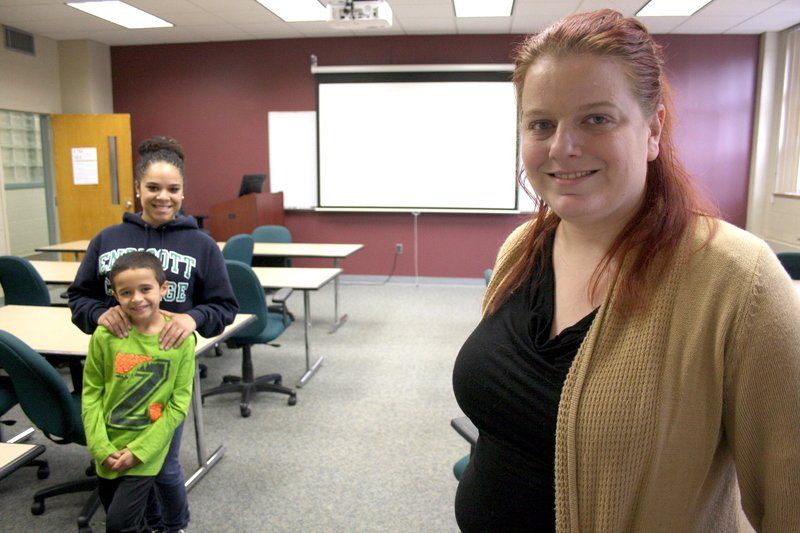 DUSTIN LUCA/Staff photoEndicott College’s Keys to Degrees program, directed by Autumn Green (right), gives single parents a chance at college life while supporting their parenting obligations. One of the students in the program is Tianisha Torres, 22, with her 7-year-old son Javien Maldonado.

DUSTIN LUCA/Staff PhotoEndicott College's Keys to Degrees program, directed by Autumn Green (right), gives single parents a shot at college life while supporting their parenting obligations. One of the students in the program is Tianisha Torres, 22, with her 7-year-old son Javien Maldonado.

DUSTIN LUCA/Staff photoEndicott College’s Keys to Degrees program, directed by Autumn Green (right), gives single parents a chance at college life while supporting their parenting obligations. One of the students in the program is Tianisha Torres, 22, with her 7-year-old son Javien Maldonado.

BEVERLY — When Ipswich resident Ashley Whippen gave birth to her daughter, Anna, at the age of 17, she thought her shot at a college education was gone.

Tianisha Torres, who was 15 when she gave birth to her son, Javien Maldonado, in Lawrence, felt the same way.

But through Endicott College, Whippen and Torres — and now dozens of other single parents — have been given the chance for a college education.

Endicott College was recently awarded a $495,000 grant, paid over three years, to replicate the school’s Keys to Degrees program across the country, said college President Richard Wylie, who started the program. The grant is made possible by the Fund for the Improvement of Postsecondary Education.

The college launched its single-parent program, Keys to Degrees, in 1993, giving 10 single parents a chance at a college education, program director Autumn Green said. Keys’ impact led to the creation of the Center for Residential Student Parent program.

The value of Keys to Degrees is two-fold. It significantly reduces the costs of getting an education, and it gives single parents the resources they need to make their education a full-time focus, Green said.

Through Keys to Degrees, Endicott College covers about 75 percent of off-campus child care costs for the students in it, with a scholarship worth as much as $17,400 annually, Green said.

Room and board, meal plans and the myriad ancillary expenses of life on campus are dampened by a “single-parent grant” that costs the school anywhere from $20,000 to $28,000 per student, according to Green.

Other federal grants and scholarship opportunities factor into the overall cost. In the end, the typical Keys to Degrees parent-turned-student pays about $8,500, Green said, which can then be covered by student loans.

Wylie started the program after chatting with a mom-to-be and thinking back to the college’s women-only days.

“When you go co-ed, how do you not lose the fact that your foundation and roots started with women?” Wylie said. “By keeping this program alive, we keep part of that founding philosophy of women’s education.”

The college created the Center for Residential Student Parent program to lead efforts advancing single-parent programming at the national level. But pitching the program at other universities has been an interesting process, Wylie said.

That’s because the colleges tend to love the idea — until the vice presidents of finance get in the discussion.

“They say, ‘Wait a minute; we’re going to lose money,’” Wylie said. “If I can afford to send my football team to travel, and I can afford to do these other things, like cheerleaders to Florida, I can’t say I can’t afford to take care of single parents.”

To date, fewer than a dozen schools across the country have a program serving single parents as Keys to Degrees does, Wylie said.

“There are few colleges in the country that couldn’t do this if they wanted to,” Wylie said. “That’s the piece that irritates and frustrates me.”

For students on the receiving end, the opportunity can be life-altering. In the years ahead, Wylie hopes to expand Keys to Degrees from 10 students to 20, he said.

After giving birth to her son, Torres battled through high school and then went to Northern Essex Community College.

“I always had intent in finishing my education,” said Torres, now a 22-year-old junior, “but I didn’t know how I could do it with my child.”

But even community college was too much to handle with a child, Torres said.

Whippen was planning to go to college before her unplanned pregnancy.

“It definitely changed what I thought my future was going to be like,” she said. “As far as the college experience goes, I didn’t think it was in the cards for me.”

Then Whippen heard about, applied for and got into Keys For Degrees.

Torres said she broke into tears when she learned she got into the program.

For the 10 students in the program, the college experience isn’t just limited to them. It gets passed on to their children, as well, the mothers said.

The children live with their parents, who pair up in four-bedroom apartments — a separate bedroom for each parent and child, Wylie said.

Whippen’s daughter Anna was 11/2 years old when they first went to Endicott and Whippen started a degree in early childhood education, she said.

“I was learning all about child development, what’s best for her and how to enrich learning experiences,” Whippen said. “Then, I’d go home and get to try them all out.”

For Torres’ son, Javien, the chance to see his mom charge through the rigors of academic life when he, too, goes to school leaves an impression, Torres said.

“That’s all he knows,” Torres said. “He comes home and reads books. He enjoys it.”

Wylie hopes to change that.

“I had a dream that out of 2,500 colleges in the country, 1,000 colleges did it,” Wylie said. “If we graduate four from each college every year, that’s 4,000 kids and parents that are off welfare. Is there any program that’s better than that?”

HOW THE GRANT WILL BE USED

The FIPSE grant for Endicott’s center will be paid out over three years, beginning Oct. 1, 2014. It will support the following activities:

Program Evaluation Toolkit: The Center will develop and pilot a robust evaluation system for use by institutions seeking to implement or improve programs serving low-income and single-parent students.

Jeremiah-Endicott Program Expansion: Endicott’s Boston academic center will expand existing programming to a greater number of students and student parents that are currently excluded from the program under current funding limitations.

Advanced Scholar Grants: Four scholar-experts from colleges nationwide will be selected to conduct two-year research projects to expand the body of empirical knowledge on student parents.

Policy & Dissemination: The center will hold a national conference, publish, present and disseminate the findings and products of its research.