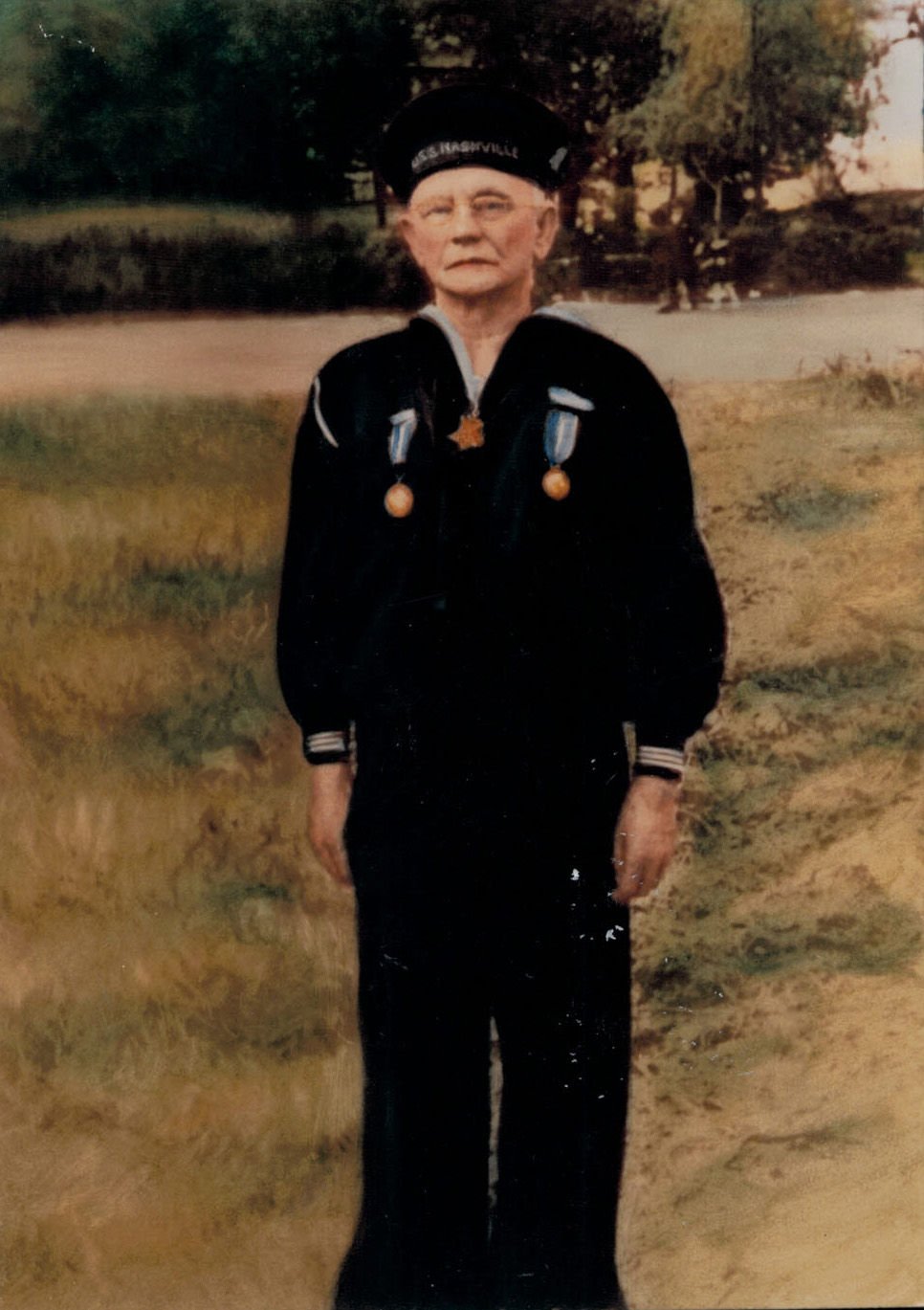 Courtesy photo John P. Riley was awarded the Medal of Honor for risking his life in 1898 as part of a Navy gunboat crew that severed a cable linking Cuba and Spain during the Spanish-American War. He died in Salem in 1950. 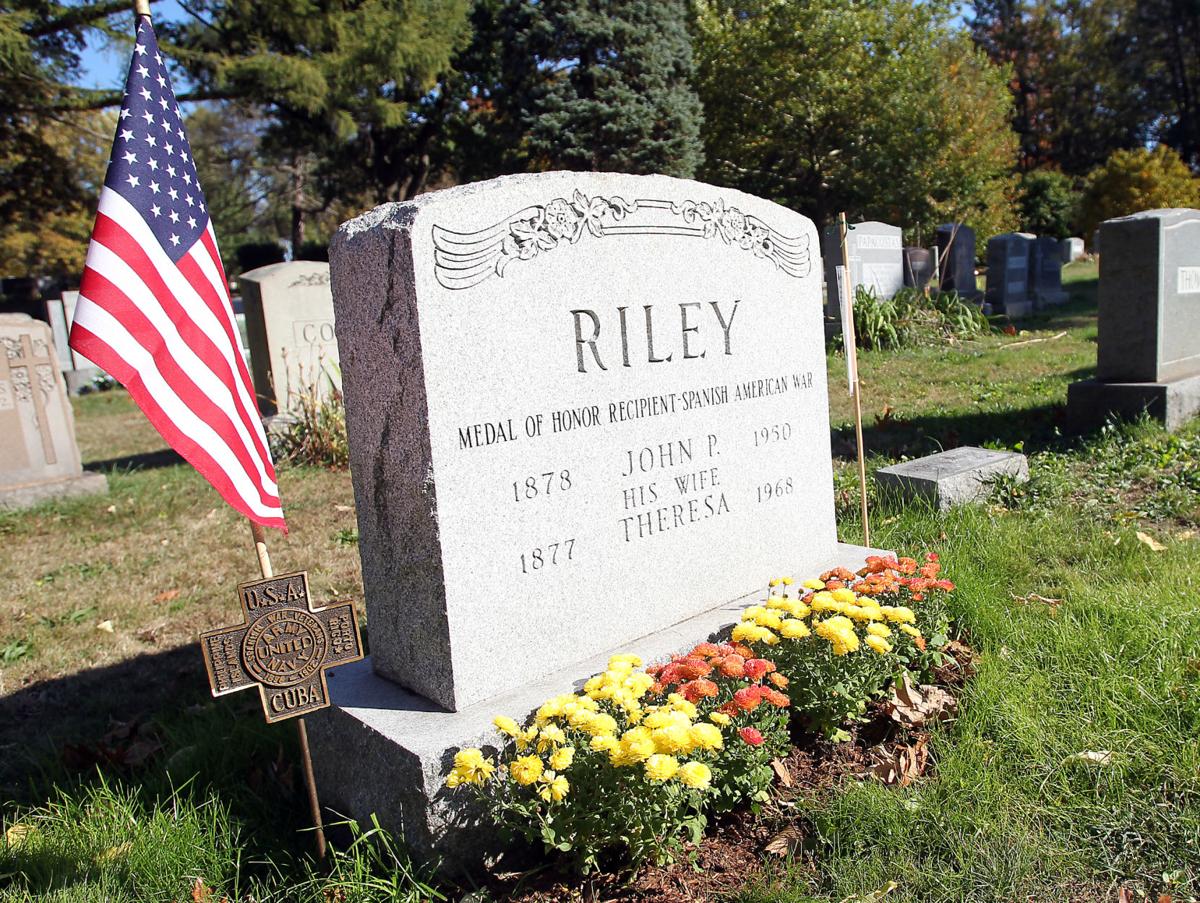 The gravesite of John Phillip Riley of Salem, a Congressional Medal of Honor recipient who fought in the Spanish-American War.

Courtesy photo John P. Riley was awarded the Medal of Honor for risking his life in 1898 as part of a Navy gunboat crew that severed a cable linking Cuba and Spain during the Spanish-American War. He died in Salem in 1950.

The gravesite of John Phillip Riley of Salem, a Congressional Medal of Honor recipient who fought in the Spanish-American War.

SALEM — When John P. Riley died in 1950, he was buried in Greenlawn Cemetery under a granite stone engraved only with his name and dates of birth and death. More than a decade later, the name of his wife, Theresa, was added.

Some years passed before a flat bronze marker was placed in the ground noting that Riley won the Medal of Honor during the Spanish-American War. His name on the small plaque is spelled “Rilley,” repeating an error made on the original citation. Over the years, grass grew over the corners of the plaque, making it easy to miss.

As a result, for 63 years, visitors to Greenlawn Cemetery had little idea that the simple grave on Eulalia Path marked the final resting spot of the city’s only Medal of Honor recipient.

Nobody seems to know why there was no inscription and why it stayed that way for so many years.

“I think it was just an oversight,” said John Riley, 74, a retired Salem firefighter and grandson of the war hero.

This fall, as the Friends of Greenlawn, a new organization, prepared for a public tour of the city cemetery, Riley and a friend visited the grave and were struck by the lack of information on the stone. The oversight was even more apparent when they visited the nearby grave of another John P. Riley grandson, Ralph Davies. It noted that the U.S. Marine had been killed at Iwo Jima.

John Riley made a phone call to a first cousin, Alice Riley-King, suggesting they start a fund to pay for an engraving on their grandfather’s stone. Other grandchildren were contacted — there are more than a dozen in the area — and in no time, more than enough money was raised.

A few weeks ago, in time for the tour, the following words were carved on the stone: “Medal of Honor Recipient — Spanish American War.”

It’s hard to say that John P. Riley has been forgotten in his hometown — Riley Plaza, after all, is named in his honor — but seven words on a gravestone help cement the memory of a man who performed a death-defying deed in a largely forgotten war more than a century ago.

On May 11, 1898, the 21-year-old Riley, a landsman aboard the gunboat USS Nashville, was one of a few dozen sailors and Marines sent off in two small boats to cut Spain’s main underwater communication cables at Cienfuegos, Cuba.

It was a harrowing mission. Armed only with revolvers and rifles, and under heavy fire, they had to get close to shore and locate the telegraphic cables that provided Spain with communication links to other cities on the island and beyond. Once the cables were found, the men dove into the water, lifted the heavy cables onto the boats, towed them out to sea and cut them with hacksaws.

The mission took three hours and resulted in several casualties. Riley was one of about 50 cable-cutters to receive the Medal of Honor.

After raising money for the engraving, the Riley family had $605 left over, which they donated last night to the Salem VFW Post, a veterans organization their grandfather joined in 1928.

John Riley attended the brief ceremony with several relatives. He even brought along the mounted and framed Medal of Honor, which included a small piece from one of the three cables cut that day. The medal used to hang on the wall of his grandparents’ home on Warner Street along with a newspaper clipping.

Riley remembers looking up at the wall when he was a child, staring at the medal and glancing at the story. But he doesn’t remember hearing war stories from the Medal of Honor recipient.

“Grandpa never talked about it,” he said.

Tom Dalton can be reached at tdalton@salemnews.com.