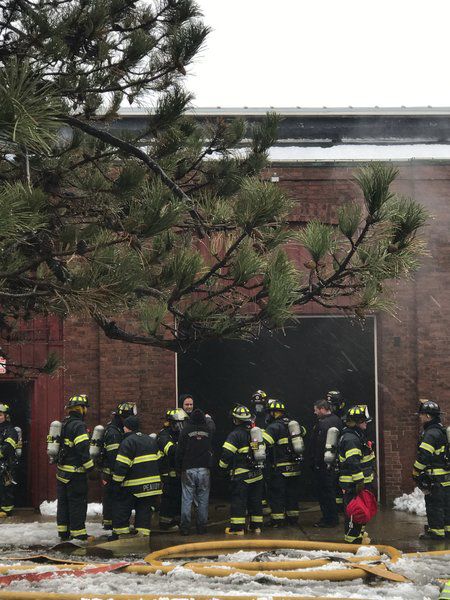 Ethan Forman/Staff photoFire crews gather before heading into a mill building to fight a fire in the roof at 58 Pulaski St. in Peabody on Monday morning. 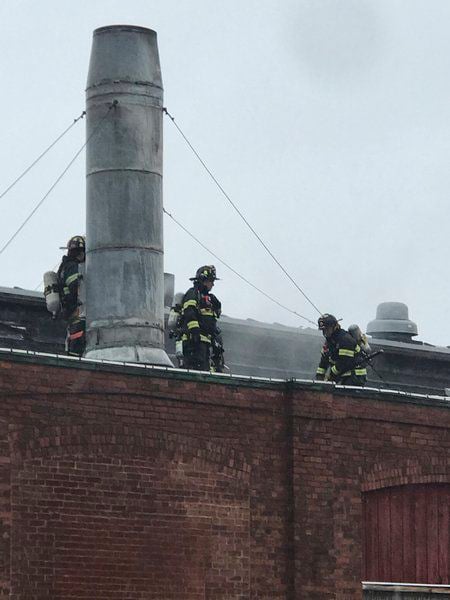 Ethan Forman/Staff photoFire crews on the roof of a mill building at 58 Pulaski St. help put out a stubborn fire that broke out on Monday around 10 a.m. 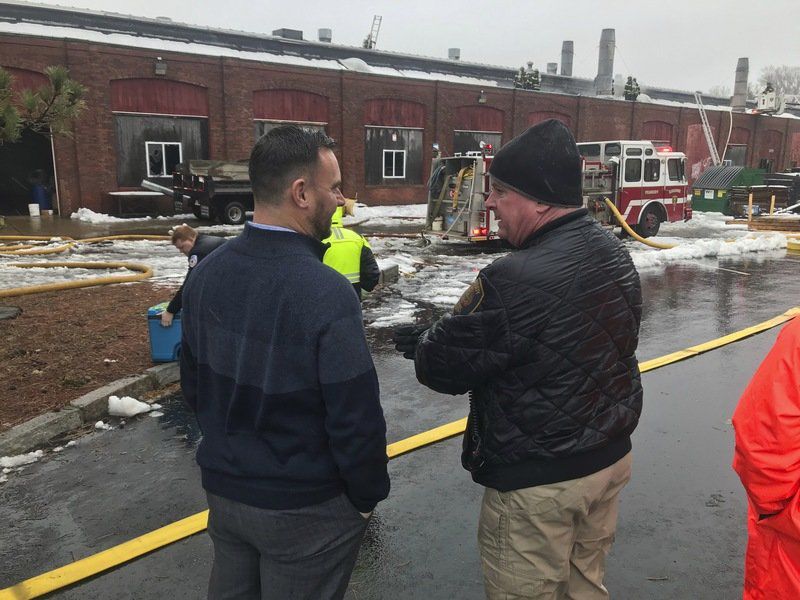 Ethan Forman/Staff photoPeabody Mayor Ted Bettencourt, left, gets an update on a stubborn fire in the roof of a mill building at 58 Pulaski St. from Peabody fire Chief Joseph Daly, right.

Ethan Forman/Staff photoFire crews gather before heading into a mill building to fight a fire in the roof at 58 Pulaski St. in Peabody on Monday morning.

Ethan Forman/Staff photoFire crews on the roof of a mill building at 58 Pulaski St. help put out a stubborn fire that broke out on Monday around 10 a.m.

Ethan Forman/Staff photoPeabody Mayor Ted Bettencourt, left, gets an update on a stubborn fire in the roof of a mill building at 58 Pulaski St. from Peabody fire Chief Joseph Daly, right.

PEABODY — One person was taken to the hospital Monday morning as firefighters spent a couple of hours trying to extinguish a stubborn fire in the roof of a mill at 58 Pulaski St.

"There was a report of one worker missing," said fire Chief Joseph Daly, who was at the scene. "They found him and one employee was taken to the hospital."

The building that caught fire is part of an L-shaped mill complex amid a cluster of industrial buildings, which city records say was built in 1917. The address in city records is 58 Pulaski St., though other buildings in the industrial park also share a similar address.

It was from the long side of the building closest to the adjacent Delande Supply Co. that smoke could be seen billowing from an open bay door around 10 a.m. No other building in the complex was impacted by the fire. City records show the building is multi-tenanted with four units.

The fire appeared to have been knocked down not too long after it was reported, but smoke continued to pour from a bay door and escape through the roof throughout the morning. Crews could be seen donning self-contained breathing apparatus and heading inside the building. Reports were crews used thermal cameras to look for hot spots in the building's walls.

About an hour later, fire broke through the roof. Firefighters used a ladder truck parked at a nearby parking lot to get on the roof and fight the blaze.

Daly didn't know how many people work in the building or at which business the fire started. He did say some companies there use chemicals and lacquer.

"They had some some sort of incident inside that could cause fire," Daly said. "When we pulled up, (we) believed the sprinklers had activated and had knocked down most of the fire, and we got in there and pushed the rest of it, but it extended into a ceiling void, a roof void."

Firefighters also apparently had to deal with evacuation issues. Radio reports at one point indicated everyone was out of the building, but at one point one person had gone back in and later came out a window.

About five minutes later, another firefighter radioed in, saying, "be advised, I'm still finding workers in here." Asked to confirm that workers were still inside, the firefighter said "that's affirmative. I hope that's the end of it." That prompted a Salem fire crew to act as a second "rapid intervention team" to run more search efforts.

No firefighters were reported hurt. All of Peabody's crews were on scene, along with firefighters from Salem and Danvers.

Mayor Ted Bettencourt came by to show his support for firefighters and his concern about the fire in an old mill.

"These type of fires at an older building here in the industrial park is always a concern, but we have outstanding leadership with our chief, amazing men and women in the department," Bettencourt said. "It's wonderful that so many cities are helping, but I'm just here to support our firefighters and do whatever I can to help."

Crews from Atlantic Ambulance were also on scene along with Roger Baker's Rehab 5, which provides support to fire crews.