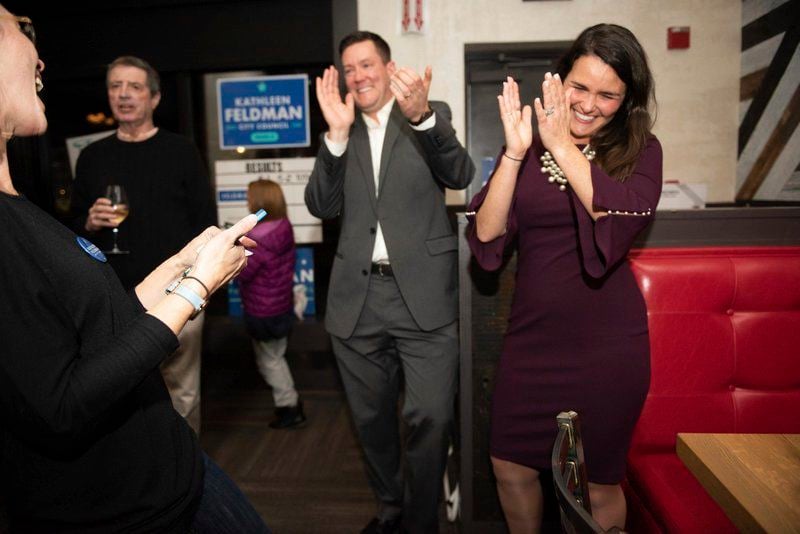 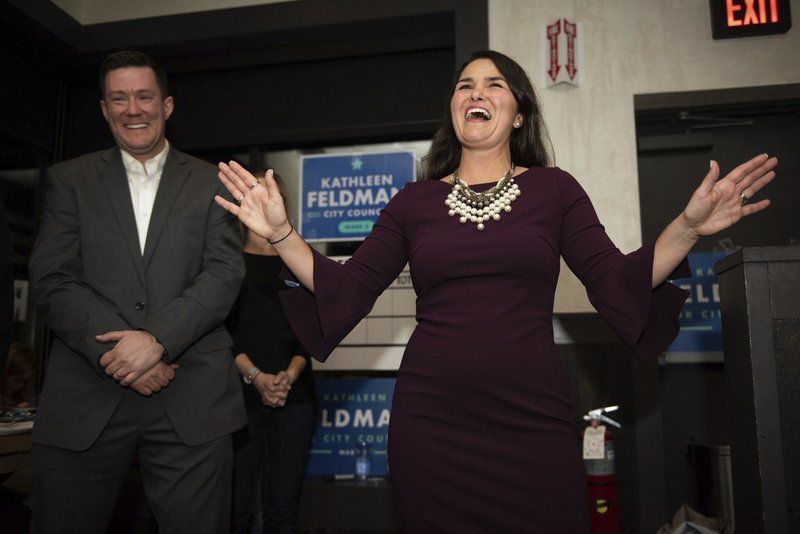 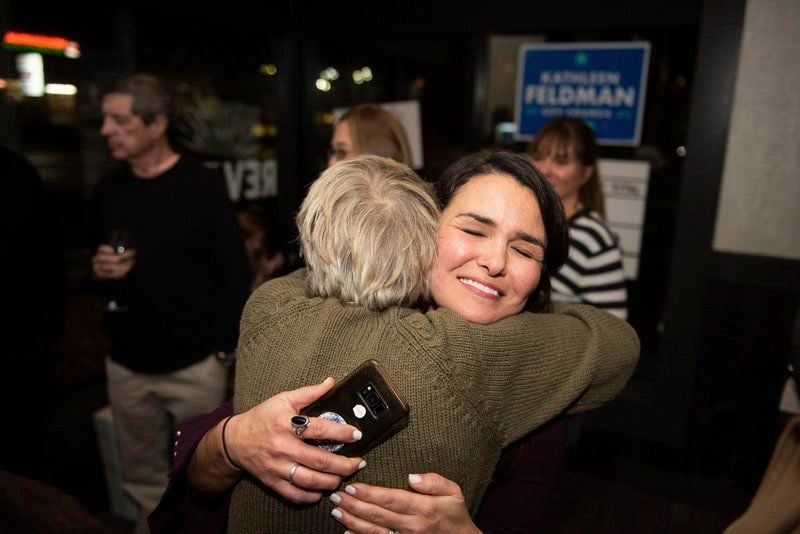 RYAN MCBRIDE/Staff photoWard 5 candidate Kathleen Feldman celebrates with family and friends after declaring victory in her City Council race at the Rev Restaurant in Beverly on Tuesday. 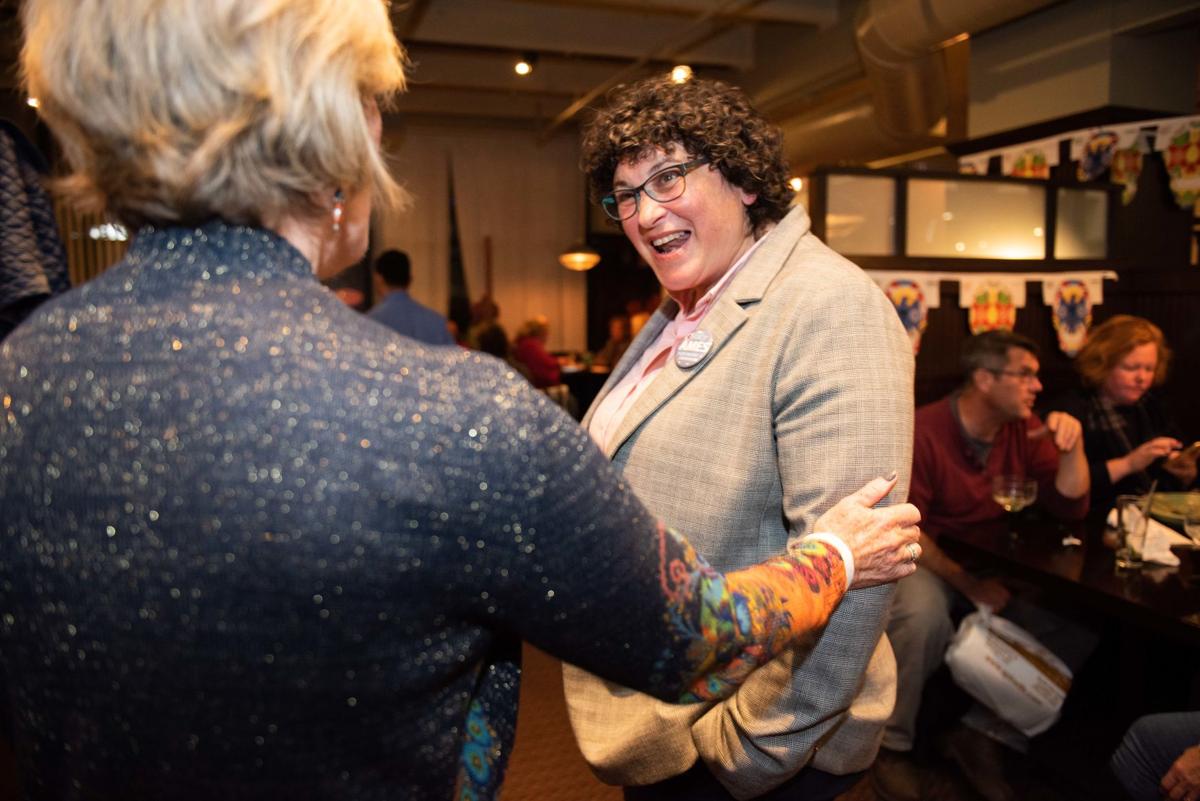 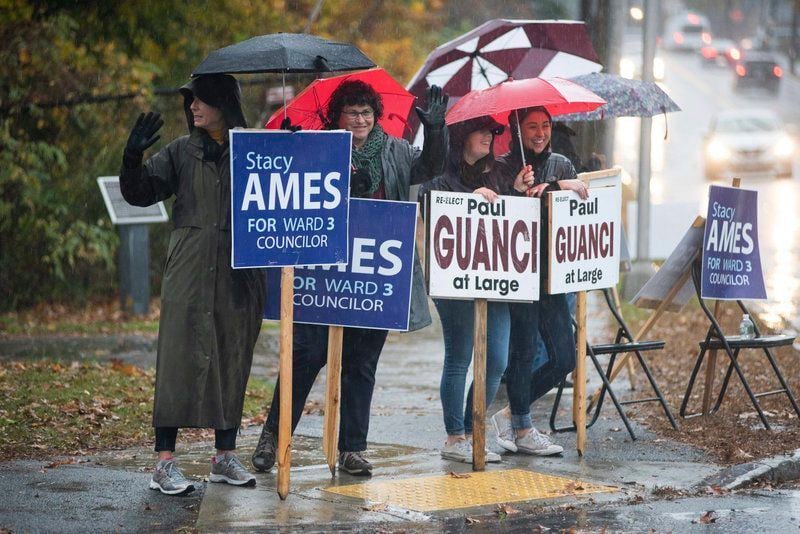 RYAN MCBRIDE/Staff photoStacy Ames braves the rain, along with others, as she waves to voters Tuesday afternoon. Ames defeated Kris Silverstein for the Ward 3 seat on the Beverly City Council.

RYAN MCBRIDE/Staff photoWard 5 candidate Kathleen Feldman celebrates with family and friends after declaring victory in her City Council race at the Rev Restaurant in Beverly on Tuesday.

RYAN MCBRIDE/Staff photoStacy Ames braves the rain, along with others, as she waves to voters Tuesday afternoon. Ames defeated Kris Silverstein for the Ward 3 seat on the Beverly City Council.

Feldman and Ames both used enthusiastic, well-financed campaigns to pull off the victories. They each raised more than $14,000, the most of all the Beverly candidates running for office this year.

“I am thrilled,” Feldman said from her victory party at REV Kitchen & Bar. “I’m just so honored and excited that the voters of Ward 5 have decided to cast their votes for me and I look forward to serving them.”

In the only other competitive races in the city, Paul Guanci topped the ticket in the City Council at-large race to remain council president, while incumbent School Committee member John Mullady beat challenger Jeffrey Silva in Ward 4.

At-large councilors Julie Flowers and Tim Flaherty finished second and third behind Guanci and were also re-elected to office. The three incumbents were the only candidates for the three at-large seats, with the top vote-getter automatically becoming council president.

Mayor Mike Cahill won re-election without an opponent for the second election in a row. It marked the first time in the city’s history that a sitting mayor ran unopposed in consecutive elections.

Feldman defeated Martin by a vote of 735 to 657, with a voter turnout of 28%. For Martin, 58, the loss ended one of the longest tenures on the Beverly City Council. He first ran for office in 1983 as a 22-year-old college student and has been a city councilor for 24 years. Feldman was his first opponent since 2007.

Reached by phone after the loss, Martin said he had only one thing to say: “It’s been an honor to serve.”

Feldman, 39, the operations manager at the Wenham Museum, had never run for public office before but ran a strong campaign. She raised three times as much as Martin.

Feldman credited her campaign’s ability to “think outside the box” for her victory. “This campaign had so much effort and energy,” she said.

Feldman added that she wanted to thank Martin for his service to the community, and for the positive campaign that he ran.

Voters interviewed at the North Beverly Elementary School polling location said they were impressed by Feldman’s enthusiasm and energy and were looking forward to a change.

Dodge Street resident Natasha Ouellette, who like Feldman has children at the North Beverly School, said Feldman has “the kids’ best interest in heart.”

“It’s exciting because she’s running against someone who’s had the position for so long,” Ouellette said.

Andrea Toulouse of Purtitan Road said she is a friend, neighbor and running partner of Feldman.

“I’ve had the privilege of watching her come to this decision to run,” Toulouse said. “It was thoughtful and it was informed. She’s worked tirelessly. I’ve never met anyone with more energy.”

“I’m grateful to the voters and to all the people who helped,” Ames said. “I think this is a new day. We’re ready for more open, constructive conversations about the issues that matter to the people in Ward 3 and the city.”

Ames thanked Silverstein for her 10 years of service on the School Committee.

Ames, the CEO of a manufacturing business in Salem, will represent a diverse ward in the middle of the city that she has called “the heart of the city.” She will succeed Jim Latter, who did not seek re-election.

Outside the McKeown School on Tuesday, Heather Street resident Pam Bates said she voted for Ames because she is “not an incumbent.”

“It’s time for a change here,” Bates said. “It’s getting a little stagnant in Beverly.”

Bates added that she was also impressed with Silverstein. “They’re both good candidates,” she said. “It’s too bad they didn’t live in two different wards.”

In the only contested School Committee race, Mullady won election to a third two-year term in Ward 4, which includes the Cove and Montserrat neighborhoods. Mullady is a teacher at Manchester Essex Regional High School.

Silva, the director of product development at a biotechnology company, was running for public office for the first time.