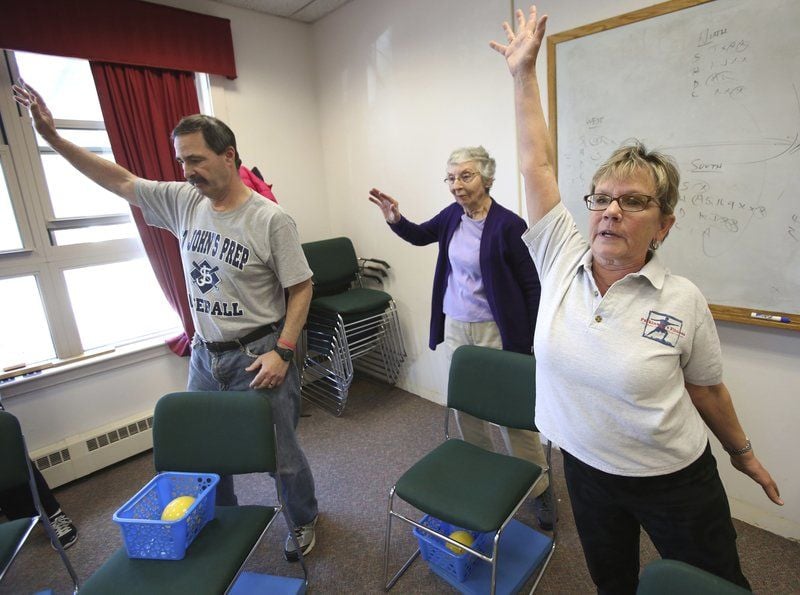 From left, Pat Yanchus, Win Sanders, and class organizer Linda Hall do exercises during the Parkinson’s Fitness program held at the Danvers Council on Aging. Movement classes are held weekly in Gloucester, Marblehead, Hamilton and Danvers. 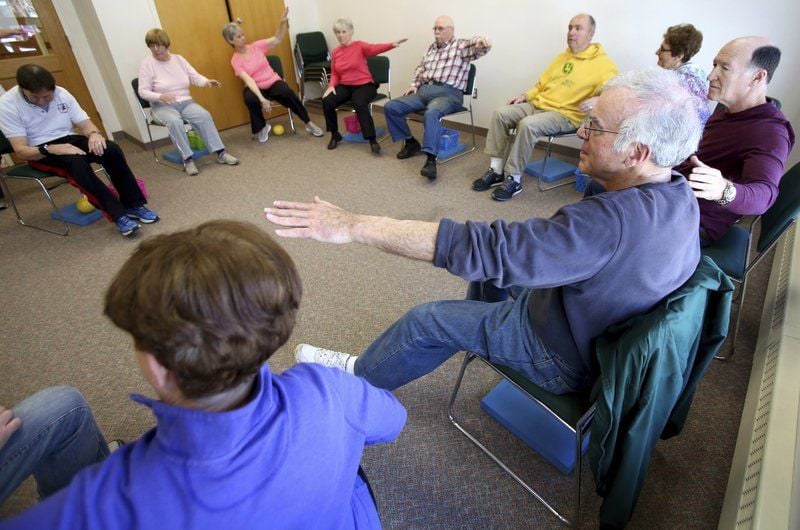 KEN YUSZKUS/Staff photosThe group does exercises during the Parkinson’s Fitness program held at the Danvers Council on Aging. Participants say the organization’s classes not only help them physically, but also mentally and socially. 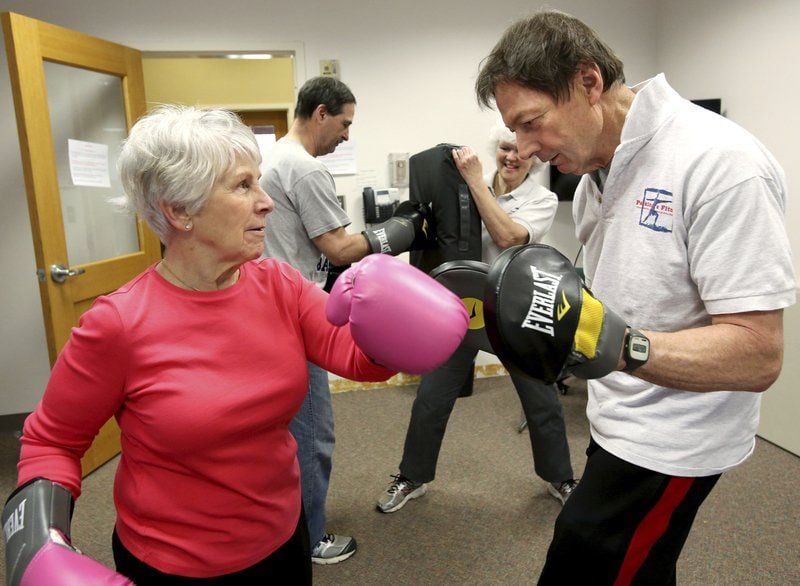 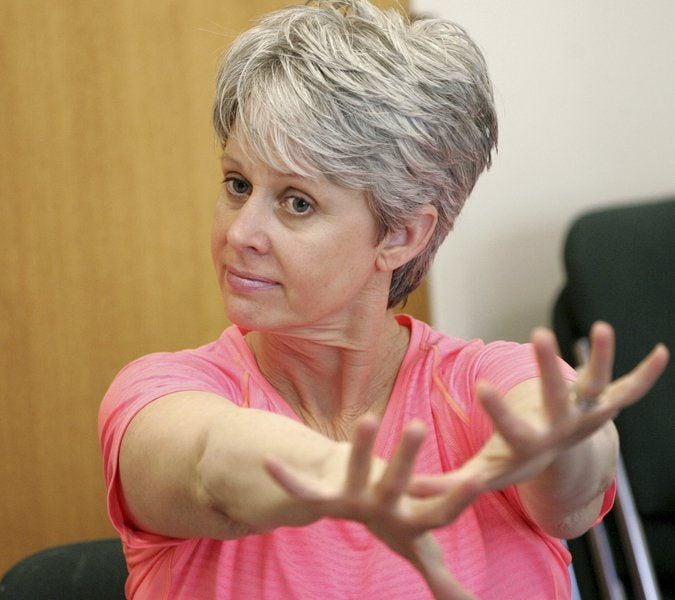 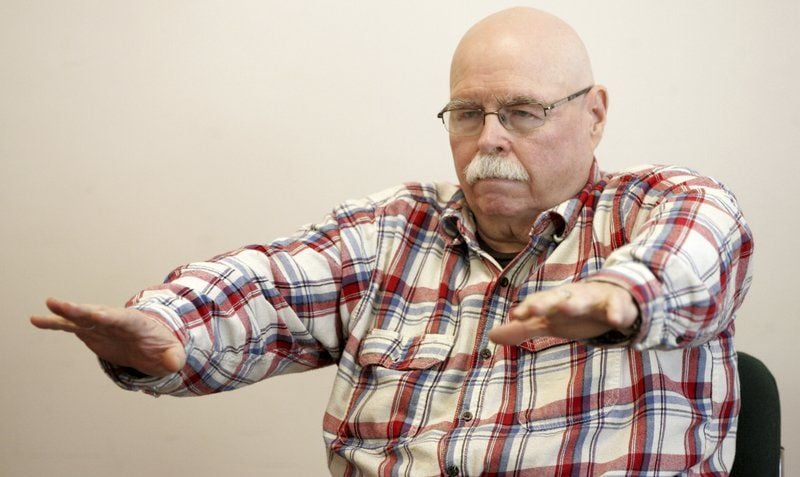 From left, Pat Yanchus, Win Sanders, and class organizer Linda Hall do exercises during the Parkinson’s Fitness program held at the Danvers Council on Aging. Movement classes are held weekly in Gloucester, Marblehead, Hamilton and Danvers.

KEN YUSZKUS/Staff photosThe group does exercises during the Parkinson’s Fitness program held at the Danvers Council on Aging. Participants say the organization’s classes not only help them physically, but also mentally and socially.

The diagnosis was Parkinson’s, a neurological disease that affects movement. But for Keith Hall, it meant he needed to keep moving.

For the past three years, Parkinson’s Fitness, started by Keith Hall, his wife, Linda, and friend Marilyn Freeman, has held classes throughout the North Shore to get other Parkinson’s patients exercising.

In recognition of April being Parkinson’s Awareness month, the organization has added several new classes — boxing at Perfect Balance Conditioning in Salem and a dance class plus a six-week drumming course in Peabody at CareOne.

As the disease progresses, it restricts movement — symptoms include stiffness and rigidity, tremors, and problems with swallowing, balance and speaking; it also affects mood, according to the fitness organization.

While exercise cannot reverse the symptoms, it can help patients be able to move more normally in day-to-day life, according to the Parkinson’s Disease Foundation.

For Keith Hall, becoming one of roughly 1,650 on the North Shore battling Parkinson’s was unexpected — he had always been active, having worked as a commercial airline pilot, a Navy flight instructor and a personal trainer.

His symptoms began to set in around age 55, according to Linda Hall. The diagnosis came in 2007.

Instead of just taking the diagnosis, the couple decided to do what they could to help Keith Hall stay active. He participated in several studies at Boston and Tufts universities; one used an exercise bike, Linda Hall recalled.

There are a lot of programs for people in Boston, she said, but not so much on the North Shore.

That’s how the organization came together.

“We sort of feel that we are trying to help people live as well as they can here,” Linda Hall said.

The program has grown over the last three years, she said. Movement classes are held weekly in Gloucester, Marblehead, Hamilton and Danvers — the Danvers class is available at two different times due to its popularity.

“We are busting at the seams,” Linda Hall said.

The classes are an alternative to going to a gym or hiring a personal trainer.

“We try to motivate them,” Freeman said. “The camaraderie is being with other people who totally understand what’s going on. It makes a difference.”

The classes are all ability-based, both Freeman and Linda Hall said — people at all levels of ability are welcome.

“It’s been a blessing,” said Mark Bobroff, a Danvers resident who was at one of the classes at the Council on Aging Wednesday.

Diagnosed last September, Bobroff said he goes to one of the movement classes three times a week. He also attends the Tuesday drumming class.

An avid gym goer, Bobroff said he still works out, but the movement classes help him in other ways.

“It stretches me out and gives me some flexibility,” he said.

Bobroff said he’s also found support and made good friends — everyone having the same disease, though with symptoms manifesting in different ways, helps them come together.

Laurie Grieves said she’s been going to classes for just over a year — from movement to the drumming and boxing courses.

Tired of avoiding exercise, she found the classes online after a quick search.

She’s been hooked since. Whether there’s a whole group of participants or only a couple, she said the Halls and other instructors give it their best.

“They make me so comfortable,” she said.

Grieves said she’s also noticed improvements in her life, and not just with mobility.

“I feel better than I have in a long time,” she said. “Even socially I do.”

Winnie Sanders had similar praise. She’s been going twice a week for the past six months.

“It’s been very good,” she said, adding that the classes have helped her.

While April is the disease’s awareness month, every day means more outreach and work with Parkinson’s patients for the Halls. The couple are headed to Portland, Oregon, for the World Parkinson Congress in September. They are also going to Indianapolis to become certified in Rock Steady Boxing, a boxing program created by Scott Newman, a Parkinson’s patient.

The key to everything is mobility and maintaining it in others, Freeman said.