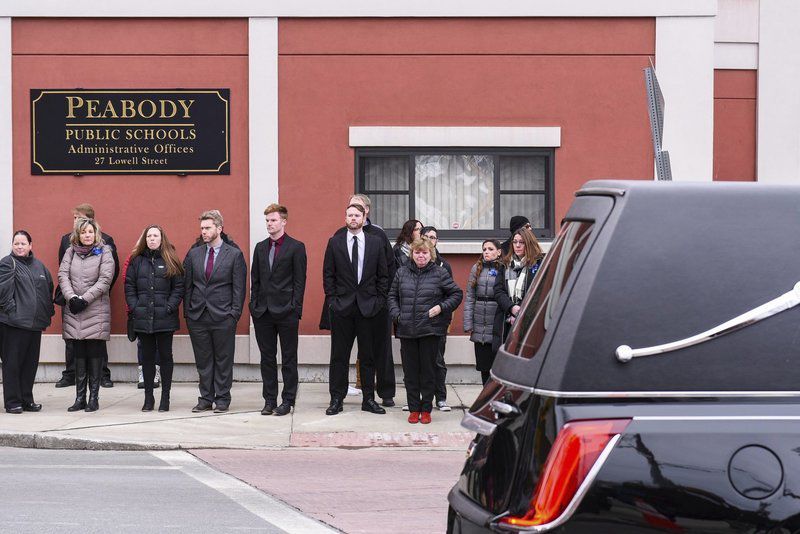 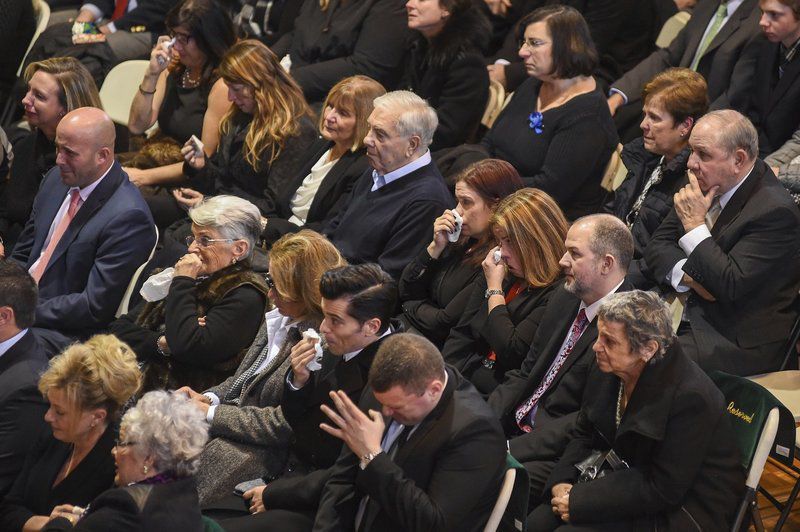 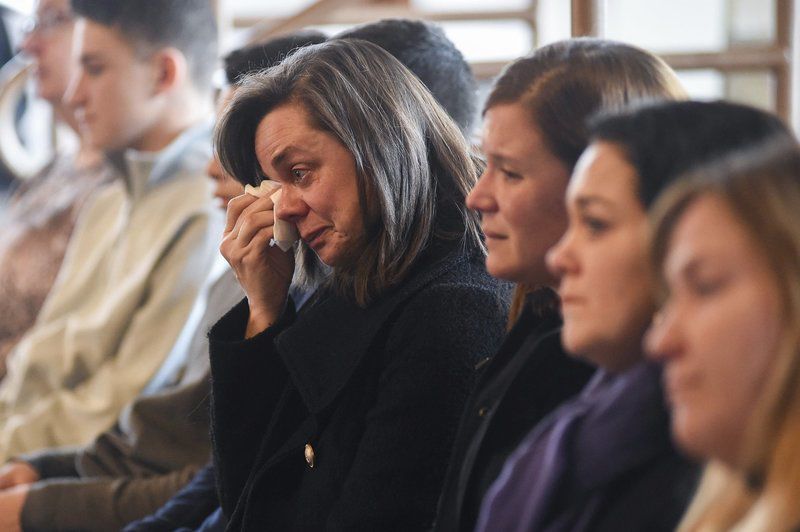 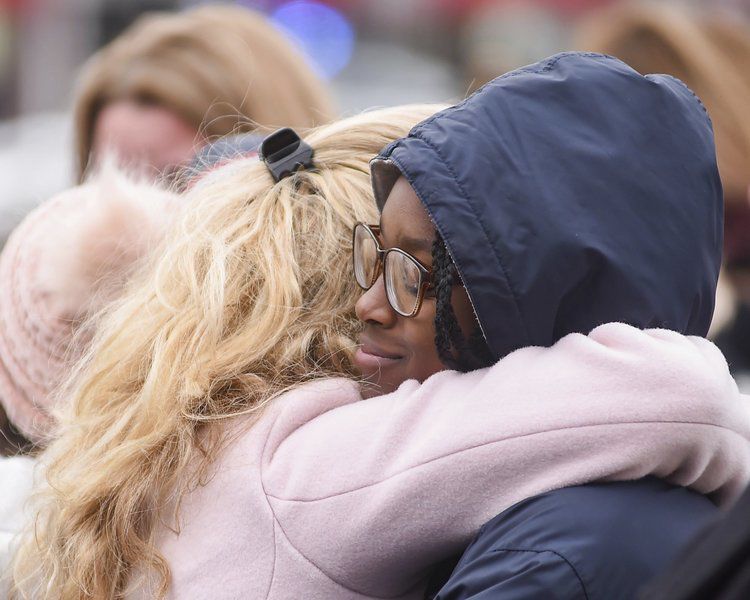 JAIME CAMPOS/Staff photoVisitors embrace as they pay their respects to Superintendent Cara Murtagh Friday after her funeral. 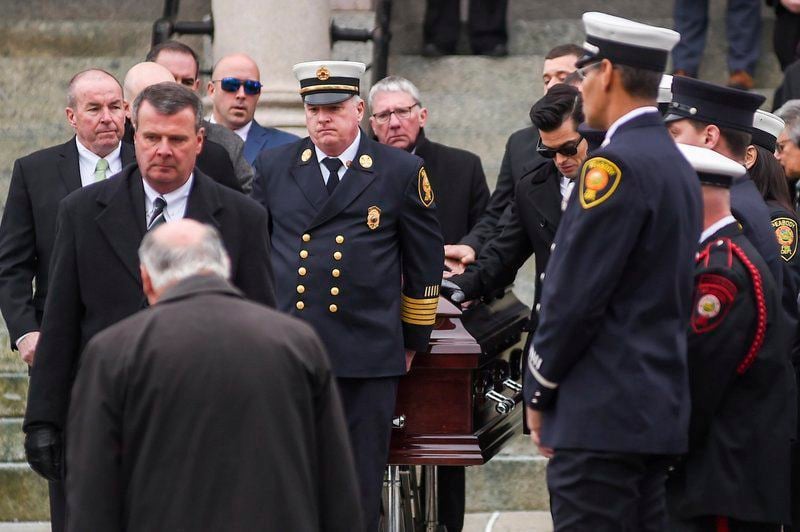 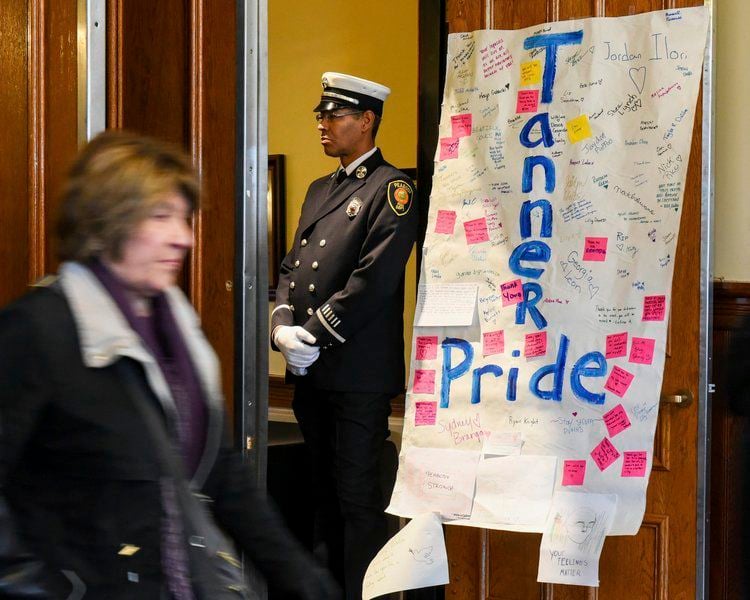 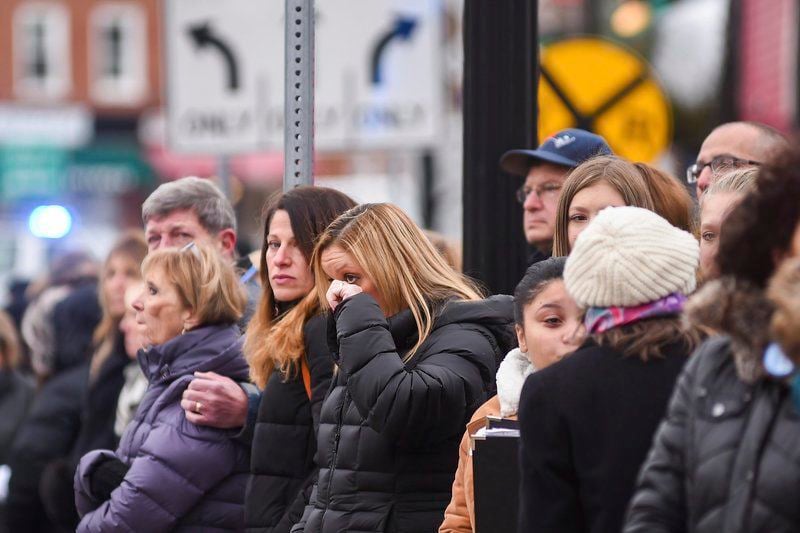 JAIME CAMPOS/Staff photoPeople wait outside to pay their respects as Superintendent Cara Murtagh is transported to Cedar Grove Cemetery after her funeral. 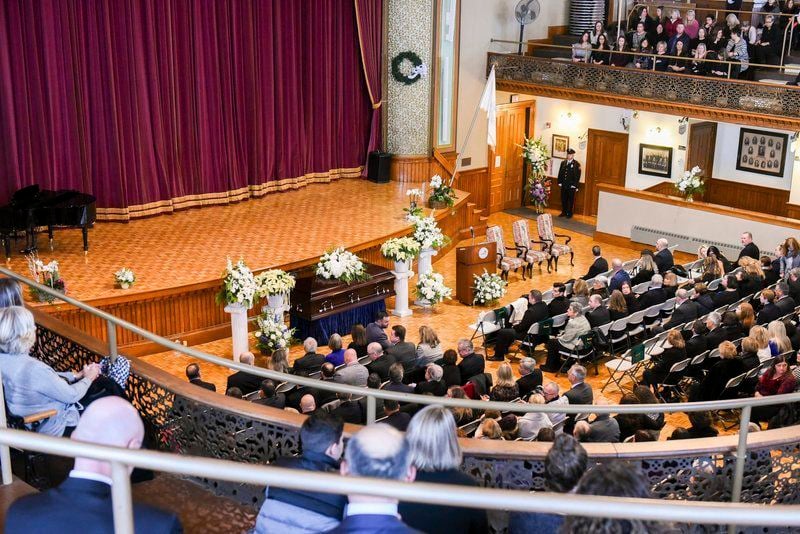 JAIME CAMPOS/Staff photoOn Friday, 500 people filled the Wiggin Auditorium of Peabody City Hall for the funeral of Superintendent Cara Murtagh. Another 250 people watched a simulcast of the funeral at the nearby St. John the Baptist Church. 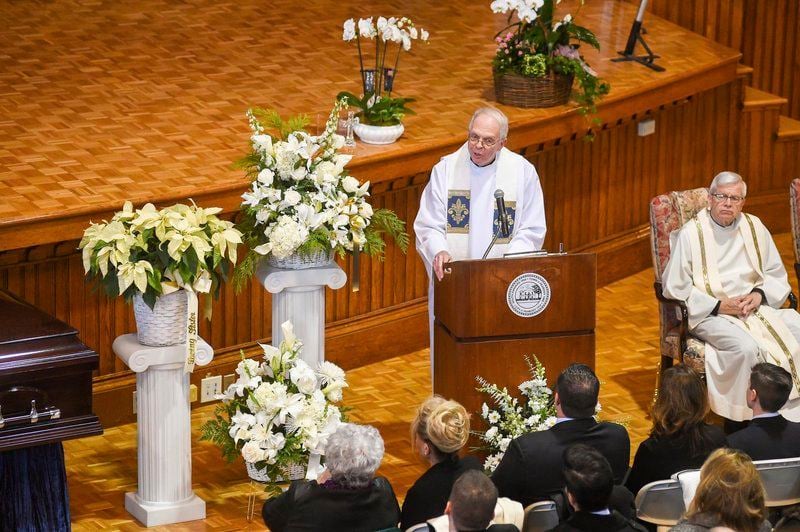 JAIME CAMPOS/Staff photoVisitors embrace as they pay their respects to Superintendent Cara Murtagh Friday after her funeral.

JAIME CAMPOS/Staff photoPeople wait outside to pay their respects as Superintendent Cara Murtagh is transported to Cedar Grove Cemetery after her funeral.

JAIME CAMPOS/Staff photoOn Friday, 500 people filled the Wiggin Auditorium of Peabody City Hall for the funeral of Superintendent Cara Murtagh. Another 250 people watched a simulcast of the funeral at the nearby St. John the Baptist Church.

PEABODY — With the hearse parked in front of City Hall, about to depart for Cedar Grove Cemetery bearing the body of the late Superintendent Cara Murtagh, the strains of Peabody Veterans Memorial High School’s fight song struck up on Lowell Street.

Hundreds of mourners who had just attended the Peabody school leader’s funeral gathered in silence on either side of Lowell Street to watch as Murtagh’s casket was carried down City Hall’s front steps, and then loaded into the hearse. Lowell Street had been blocked off from Peabody Square to School Street to allow for the funeral procession to commence.

The marching band, under the direction of Jason Jones, had set up in the parking lot of the Peabody Public Schools Administrative Offices, right across the street from City Hall.

Visible from the window of the second-floor of the building where Murtagh’s office was located, a sign read: “Superintendent Cara Murtagh Forever In Our Hearts.”

“She loved being superintendent because she could make a difference in children’s lives,” said friend and City Councilor Tom Gould during Murtagh’s funeral in Wiggin Auditorium of City Hall, which was packed with about 500 people.

Another 250 watched the funeral as it was being simulcast at the nearby St. John the Baptist Church on Church Street.

“Cara’s method of leadership was based on relationships and trust,” Gould said. “‘Every student, every day’ was her goal, and when her feet hit the floor at 5 a.m., she was focused on fulfilling that goal.”

Murtagh was a lifelong resident of Peabody whose family is a fixture in the community.

Remembered for her vibrancy, smile, kindness, love of students, demanding work ethic and love of fashion and shoes, she died on Nov. 29, the day after Thanksgiving, at Salem Hospital at age 44.

She had been superintendent since 2018, but her career in the Peabody schools spanned more than two decades.

Thousands had turned out for visiting hours the day before, and on Friday morning, hundreds of friends, family, teachers, students, staff, city and school officials, Mayor Ted Bettencourt, police and fire officials, and state lawmakers celebrated a Mass for Murtagh. The high school chorale performed “Amazing Grace” and other songs during the service.

A love for laughter

Gould brought a light touch by saying that Murtagh loved to laugh, and most of all, about herself.

“She knew better than to take herself too seriously,” he said.

He recalled a trip she took with a friend to Florida, and when they arrived late, the only car left to rent was a compact PT Cruiser, which Murtagh had dubbed: “The loser cruiser.”

“Well, as luck would have it, the seat height could not be adjusted, so Cara had to open the sunroof so she could fit in the driver’s seat. She said she looked like Big Bird, with her hair flying everywhere through the sunroof,” Gould said.

He also recalled a time when Murtagh was at Mass General Hospital being treated for kidney stones. Gould said she insisted no one come visit her, “that neither I nor anyone else was going to see her in a Johnny.”

While on the phone with Gould, Murtagh said she thought the doctor was in the room because she saw a pair of shiny, black dress shoes under the curtain, “and she hoped he was handsome.”

“Well, it was a doctor all right, it was Dr. Herbert Levine paying a surprise visit,” said Gould about the former twice interim superintendent of Peabody schools, who Murtagh worked with before she was appointed to the job. Levine was among those in attendance Friday.

The Rev. Paul Ritt of the Lynnfield Catholic Collaborative, who has known Murtagh’s mother, Carol Murtagh, for almost 40 years, summed up the surreal nature of being at a funeral during the holiday season.

Instead of getting ready for a joyous time of year, he said, they were gathered in City Hall to mourn the death of the city’s school leader, “Cara Murtagh, an energetic personable woman in her prime of her life.”

Ritt said this did not seem possible, and for those who knew her best, the past week must have seemed like a never-ending nightmare.

“Like the Grinch has stolen your most prized possession, just before Christmas, and you know your life will never be the same,” he said.

“Perhaps there are many ‘why’ questions swirling around our heads today,” Ritt said. “One of them might be, why did this have to happen to Cara? Other questions might be, why do the good die young? Why do bad things happen to such good people. Frankly, my friends, there really are not satisfying answers here.”

Referring the Gospel of St. Matthew, Ritt said: “Answers to these ‘why’ questions are some of the ways God has not revealed to the wise and the learned, but children of God, people of faith, do know where God is today, and what God is doing for us now, and will do us good in the days to come.”

Murtagh showed signs of “passionate dedication” in elementary school, Ritt said. She attended Our Lady of the Assumption parochial school in Lynnfield, which is Ritt’s parish.

“All this time, Cara was preparing to follow in her father’s footsteps,” said Ritt of the late John M. “Jack” Murtagh, the principal of the former Kiley Brothers Memorial School for 37 years.

Gould said Murtagh started her career teaching first grade at the nearby St. John the Baptist School. She spent much of her career at the Carroll School, where she was a first-grade teacher and then a vice principal. She then became principal of the Center School, then went back to the Carroll as principal.

“Cara was not done, however,” Gould said, “because her motto, ‘remember, the kids always come first,’ would be the way she conducted herself every day. This is what her father engraved in her.”

“As it turns out, in her kind, selfless way of giving, giving of her time and talent with educating the children of this city, Cara was really following the example of no less than Jesus himself,” Ritt said.

In addition to her mother, Murtagh is survived by her sister, Kim Murtagh of Peabody, her brother, Sean Murtagh and his wife Colleen of Greenbush, New York, and her niece and nephews, Ashley, Michael, and Jack Murtagh.