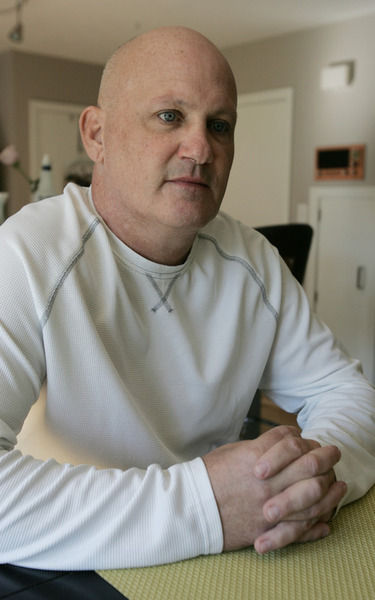 Peter Devereaux is a Peabody native who was diagnosed with stage 3B male breast cancer in January 2008. Ken Yuszkus/Staff photo 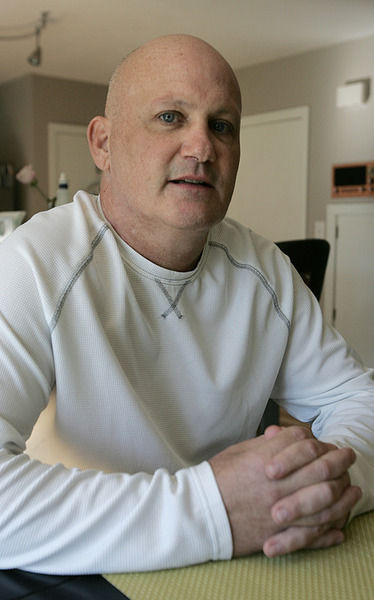 Peter Devereaux is a Peabody native who was diagnosed with stage 3B male breast cancer in January 2008.

Peter Devereaux is a Peabody native who was diagnosed with stage 3B male breast cancer in January 2008. Ken Yuszkus/Staff photo

Peter Devereaux is a Peabody native who was diagnosed with stage 3B male breast cancer in January 2008.

So when his doctor called to give him the news, Devereaux thought he had called him by mistake.

“I said, ‘Doc, it’s Peter Devereaux,’” he said, thinking his doctor would apologize and hang up.

He didn’t, and within days Devereaux was back at the hospital, getting a bone scan and chest X-ray to see how far the cancer had spread within his body.

A Peabody native and North Andover resident, Devereaux, 50, was diagnosed with stage 3B invasive ductal carcinoma in January 2008. For the past 41/2 years, he has been battling the disease, which doctors discovered had spread to his hips, ribs and spine in 2009.

He is one of 82 men who have been diagnosed with male breast cancer believed to have been caused by water contamination at Camp Lejeune, a Marine Corps base in North Carolina.

Devereaux signed up for the Marines after graduating from Peabody High School in 1980. He served until December 1984, and in that time spent 16 months at Camp Lejeune.

“On average, you’re 19 years old in the service, you work out like crazy, you work hard, you’re drinking water by the quarts,” he said. “None of us knew about the contaminated water.”

In 2008, Devereaux said he received a letter telling him he may have come in contact with contaminated water. By then, however, he had already found a lump in his chest.

After his diagnosis, Devereaux underwent a mastectomy followed by numerous rounds of chemotherapy and radiation. Doctors removed 22 cancerous lymph nodes.

“It makes you appreciate a lot of things in a hurry,” he said.

In 2009, after he began experiencing shooting pain up his spine, doctors discovered that his cancer had metastasized. He’s still fighting, currently undergoing chemotherapy to beat the cancer.

In the meantime, Devereaux is doing all he can to be an advocate, to raise awareness of male breast cancer. There’s still a perception that breast cancer is a women’s disease, and many men don’t think it can happen to them.

“It’s difficult for a lot of guys to come to grips with having, at the bottom line, a women’s disease,” he said. “We’ve still got a long ways to go, we’ve still got work to be done.”

Fortunately for Devereaux, family and friends have rallied around. One of seven children, Devereaux said his family, his wife and his 15-year-old daughter have been incredibly supportive.

“One thing you learn early on: All my friends, all my family, we all have it. It’s not just me,” he said. “Cancer’s not an individual sport, it’s a team sport.”

Among his biggest supporters has been a group of men with whom he used to play pickup basketball games. Last year, they approached him about organizing a tournament to raise money for breast cancer awareness. It was a success, and this year, the second annual Turkey Shootout, a four-on-four tournament, is scheduled for Saturday, Nov. 24, at 8:30 a.m. at Boston North Fitness Center in Danvers.

This year, all proceeds from the tournament will go to Art beCAUSE, a Massachusetts-based organization with a goal to discover breast cancer’s environmental causes.

A former ultramarathoner and Golden Glove boxer, Devereaux said he’s happy now just being able to walk two or three miles. And as he’s had to make life changes, his friends have adapted, too. Where they used to go out for a drink after work, now they hit the juice bar for a shot of wheatgrass.

“I tell people I’m one of the richest guys I know,” he said.

For more information about Devereaux, visit www.peterdevereaux.com. To register for the Turkey Shootout, email Devereaux at peter_devereaux@yahoo.com.