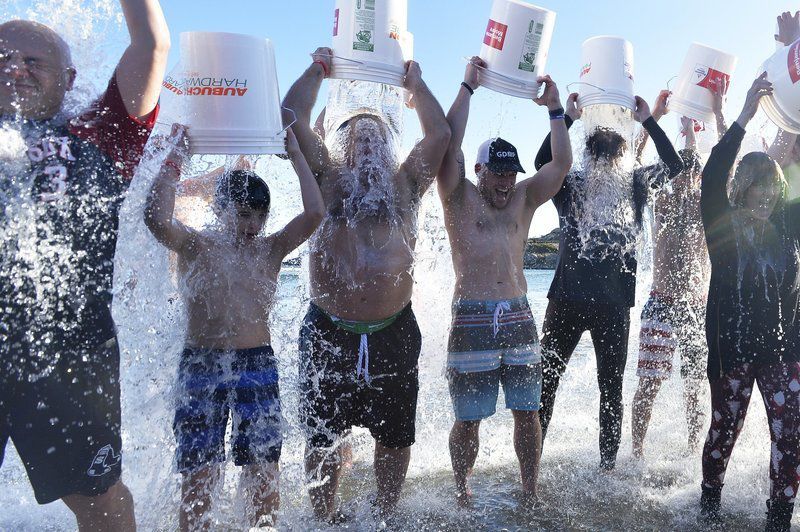 Joseph Prezioso/PhotoParticipants take part in a version of the ice bucket challenge after the plunge. 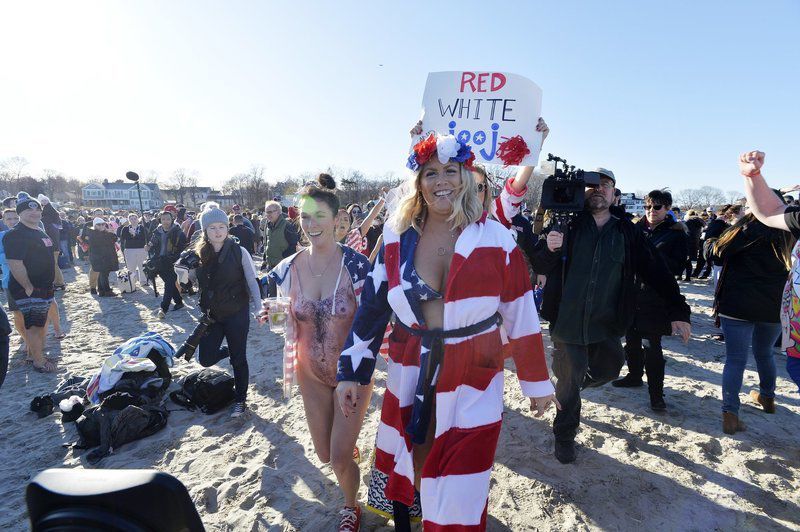 Joseph Prezioso/PhotoJulie Frates, the wife of the late Pete Frates, made her way with friends to the ocean at Good Harbor Beach in Gloucester Saturday for the final Plunge for Pete polar plunge fundraiser, honoring the late Pete Frates, who died earlier this month. Thousands of people gathered on the beach to help raise money for ALS and hundreds took the plunge into the water. 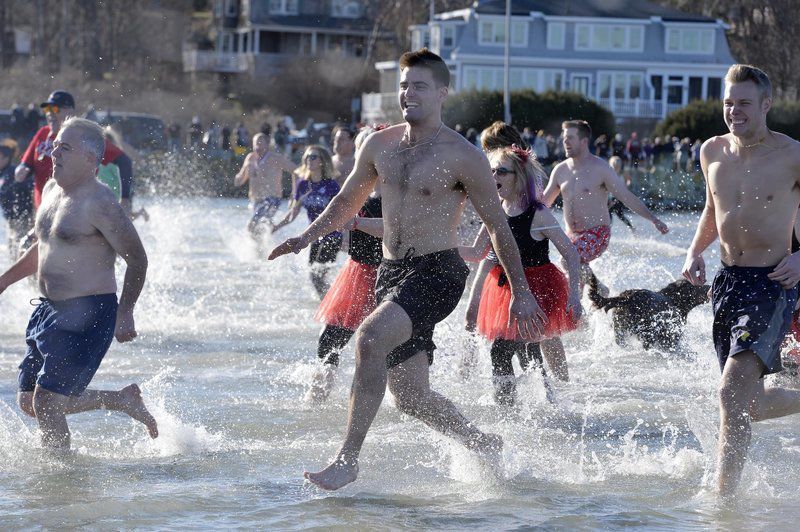 Joseph Prezioso/PhotoParticipants make their way in and out of the cold water.

Joseph Prezioso/PhotoParticipants take part in a version of the ice bucket challenge after the plunge.

Joseph Prezioso/PhotoJulie Frates, the wife of the late Pete Frates, made her way with friends to the ocean at Good Harbor Beach in Gloucester Saturday for the final Plunge for Pete polar plunge fundraiser, honoring the late Pete Frates, who died earlier this month. Thousands of people gathered on the beach to help raise money for ALS and hundreds took the plunge into the water.

Joseph Prezioso/PhotoParticipants make their way in and out of the cold water.

Hundreds of people stood on the shore's edge at Good Harbor Beach Saturday in nothing but bathing suits, all in support of a man who had made waves in the classroom, on the baseball field, and in the fight against ALS.

On Dec. 28, the day that would have been Pete Frates' 35th birthday, more than 400 people plunged into the ice cold Atlantic Ocean for the eighth and final Plunge for Pete.

Frates, the Beverly man who inspired the ice bucket challenge that raised more than $200 million for ALS research, died Dec. 9.

"This is beyond expectations," said Nancy Frates, Pete's mother, Saturday, standing just feet away from the rising tide of Good Harbor Beach. "This community has lifted our spirits beyond anything that we could have asked for."

The Plunge for Pete was established in 2012 to raise money to assist in Pete's care. This year, the plunge raised more than $203,000, which will help pay down bills the family has accumulated for Pete's around-the-clock medical care.

Before this year's event, the plunge's largest crowd was in 2014, when 250 people took the icy dip. But Saturday's event blew that record out of the water, as 100 people signed up on the day of.

Organizers confirmed that the numbers for 2019 exceeded well over 400.

"If there is one word to describe everything, it is love," Nancy Frates said. "It is emblematic of the love that Pete lived his life and how he led with that."

Minutes before the masses made the mad dash Saturday, Todd Angilly of the Boston Bruins sang the national anthem alongside a billowing American flag and a sea of people ready to plunge.

Julie Frates, Pete's widow, led the charge in her husband's favorite red, white, and blue bikini that she had worn when the two met eight years ago.

"Pete Frates once said that the cure for everything is salt water. I think he is right," Julie Frates posted on Facebook the day before the plunge.

With screams of excitement and anticipation, Julie Frates and her friends raced into the water. The crowds gladly followed.

Among them was Jeff Melei, who actually jumped in twice dressed in a full-body reindeer costume.

"I'm jumping for Pete and to raise awareness of ALS," Melei said.

Afterward, Pete's father, John Frates, and Beverly police Chief John LeLacheur braced the cold again in another ice bucket challenge and challenged anyone else to join in.

"At this hour of the ice bucket challenge Happy Birthday to Pete, let's strike out ALS and make sure that no other family, no other person has to suffer through this horrific disease ever again," John Frates said. "This one's for you Pete."

With that, the two lifted the buckets over their heads and let the ice cold water fall.

"It is obviously hard for the entire Frates family and anyone who is suffering with ALS. I don't know a family it hasn't affected one way or another," LeLacheur said. "This is our way to support all of the great work that they have done over the years and now we have to continue to do it."

Soon after, the crowds made their way to Bass Rocks Golf Club for a post-plunge celebration that included live music and food donated by Jersey Mike's.

"These last few weeks have been the hardest of my life, but Lucy and I are still standing," Julie Frates wrote on social media. "We are amazing and inspired everyday as we continue to feel Pete's love, as well as the love and support from family, friends, acquaintances, and strangers."

A legacy beyond a lifetime

Despite Saturday being the final Plunge for Pete, many agreed the Beverly resident's legacy will live on for generations to come.

"I don't think he was the type of person who would want everyone to just go away because he is not here with us physically anymore," Amy Sclafani said, one of Pete Frates' in-house nurses. "He would want people to continue his mission."

For five years, Sclafani has been one of many to care for Pete as he battled Lou Gehrig's disease.

"I feel like it is all about living out the spirit that Pete had," she said. "He had such a big spirit and energy."

While Sclafani did not plunge this year, she stood on the shore in support of her husband, Eric, and the hundreds of others who jumped in.

"I will be the one holding the towels, the bathrobes, and the baby," she laughed.

Six weeks ago, the Sclafanis welcomed their son Logan into the world and had the opportunity to introduce him to Pete.

"Logan will always know who Uncle Pete was and what he stood for," Sclafani said, cradling her newborn son in a red blanket that had "Frates" written in white.

Staff writer Taylor Ann Bradford can be reached at 978-675-2705 or tbradford@northofboston.com.

On Saturday, Dec. 28, the day that would have been Pete Frates' 35th birthday, more than 400 people plunged into the ice cold Atlantic Ocean f…