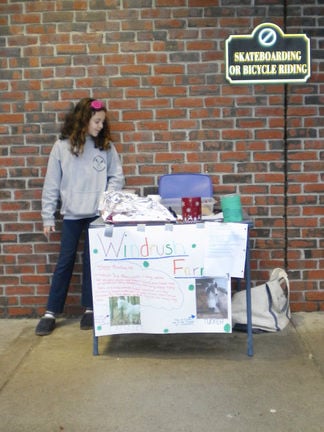 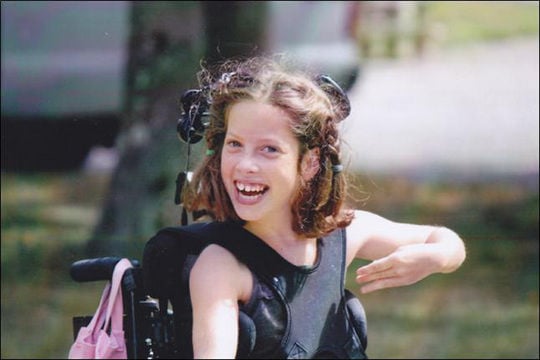 Diana Rich, a sixth-grader at Miles River Middle School in Hamilton, is pictured at Windrush Farm in Boxford. Two of her classmates, Mazey Loomis and Deirdre Burke, recently held a bake sale to raise money for Windrush in Diana's honor. 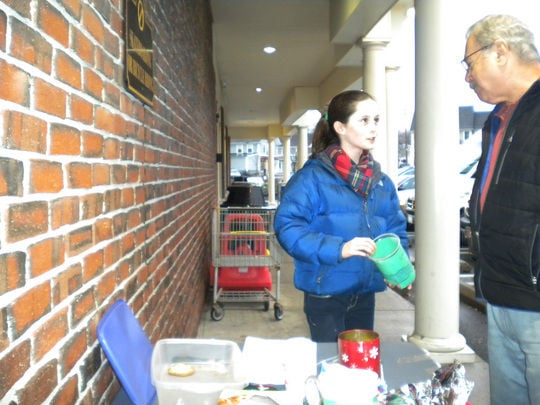 Hamilton sixth-grader Mazey Loomis talks to a potential customer at a recent bake sale she organized with her friend to benefit the nonprofit Windrush Farm in Boxford.

Diana Rich, a sixth-grader at Miles River Middle School in Hamilton, is pictured at Windrush Farm in Boxford. Two of her classmates, Mazey Loomis and Deirdre Burke, recently held a bake sale to raise money for Windrush in Diana's honor.

Hamilton sixth-grader Mazey Loomis talks to a potential customer at a recent bake sale she organized with her friend to benefit the nonprofit Windrush Farm in Boxford.

HAMILTON — What started as a bake sale by Hamilton sixth-graders Mazey Loomis and Deirdre Burke has inspired a flurry of donations for Windrush Farm, a Boxford nonprofit that provides horseback riding as therapy for the disabled.

The two girls baked a total of 100 cookies for their bake sale, which netted $230. They sent the money to Windrush in honor of their friend Diana Rich, also a sixth-grader at Miles River Middle School, who takes riding lessons at Windrush.

Windrush posted the heartfelt letter Mazey and Deirdre wrote to accompany their donation on their website, windrushfarm.org, on Jan. 6. Within 24 hours, Windrush received a flurry of donations in response, including five people who pledged to match Mazey and Deirdre's $230.

"Diana is such a close friend to me, and I really love having her around. It was really important to do something that would help people like her and Windrush Farm," Mazey said.

Mazey said she, Diana and Deirdre are a lot alike. They have known each other since kindergarten. All three like sports — although she uses a wheelchair, Diana loves kicking a soccer ball — and spending time together.

"It is important that people with disabilities can do everyday things that me and you do," Deirdre said. "(Windrush) is a great program, and the people are really nice. (Riding) helps riders mentally and physically."

The idea for a bake sale grew out of the service learning project, a course at Miles River Middle School that places emphasis on community service.

Mazey and Deirdre wanted to do something to help Windrush but were too young to volunteer with the horses. So they got to work baking.

"We were very serious about helping out at Windrush or trying to raise money, because Diana rides there," Mazey said.

Alongside their batches of cookies, the girls created fliers and posters about Windrush Farm.

They held the bake sale on a recent Sunday at The Shoppes at Hamilton Crossing, in front of Crosby's Market.

Mazey and Deirdre accompanied Diana to a lesson at Windrush once and walked beside her horse.

"Diana had the biggest smile on her face," Deirdre said. "She looked really happy."

Following is the letter that Mazey Loomis and Deirdre Burke sent with their donation to Windrush Farm.

We have been working hard to raise money for your fabulous program. After making posters, cans, cookies and fliers, we have raised $230.51 for Windrush Farm.

Deirdre Burke and myself would like to donate this money to Windrush in honor of Diana Rich. She rides at Windrush and is my best friend. She is so nice and funny, and I could not ask for a better friend. I have known Diana for a long time, and she has always talked about how excited she is to ride on Wednesday with Tucker.

The program is so nice, and I love it because of how much joy it brings to my best friend. We hope this money will help you keep this program running because it is very important to me that it does.

I want to thank you so much for how much you help out, it is so nice to hear that this program runs on volunteers that help out and changes the lives of these kids and adults including Diana.

Thank you for bringing so much joy and happiness to my best friend, you don't know how much it means to me. Thank you so much, and I hope this helps even just a little bit.

Home-delivery customers of The Salem News get deals for restaurants, hotels, attractions and other businesses, locally and across the country.