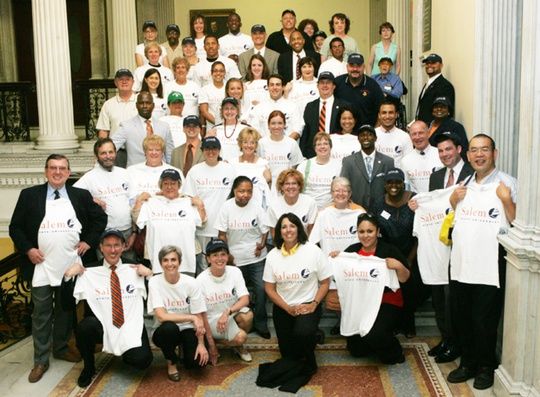 Mayor Kim Driscoll, front and center — a Salem State alumna — and students and school officials celebrate the college's elevation to university status. Shown at the Statehouse, the celebrants boast T-shirts commemorating the occasion. 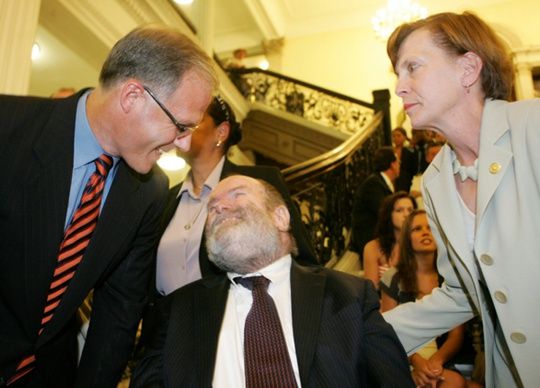 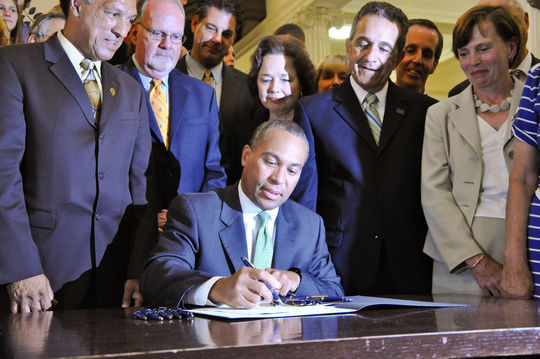 Mayor Kim Driscoll, front and center — a Salem State alumna — and students and school officials celebrate the college's elevation to university status. Shown at the Statehouse, the celebrants boast T-shirts commemorating the occasion.

SALEM — There were a lot of smiles yesterday when Gov. Deval Patrick signed a bill renaming Salem State College as Salem State University.

Following the stroke of the governor's pen during a 1 p.m. ceremony on the Grand Staircase at the Statehouse, those in the packed hall broke into applause.

"We're just delighted," Salem State President Patricia Meservey said. "It's a wonderful accomplishment for the institution and for all of the new (state universities)."

Salem Mayor Kim Driscoll, a Salem State graduate, and former Salem State President Nancy Harrington, now a member of the Board of Higher Education, both attended. Harrington campaigned for years for the name change.

Joining the state university system will increase the status of the state's public colleges, officials said, and open opportunities for students and for the institutions. It also will level the playing field, they said, since all but four states have incorporated their public colleges into universities.

"It's much more than a name change," Meservey said. "It's a recognition of what our institution has accomplished."