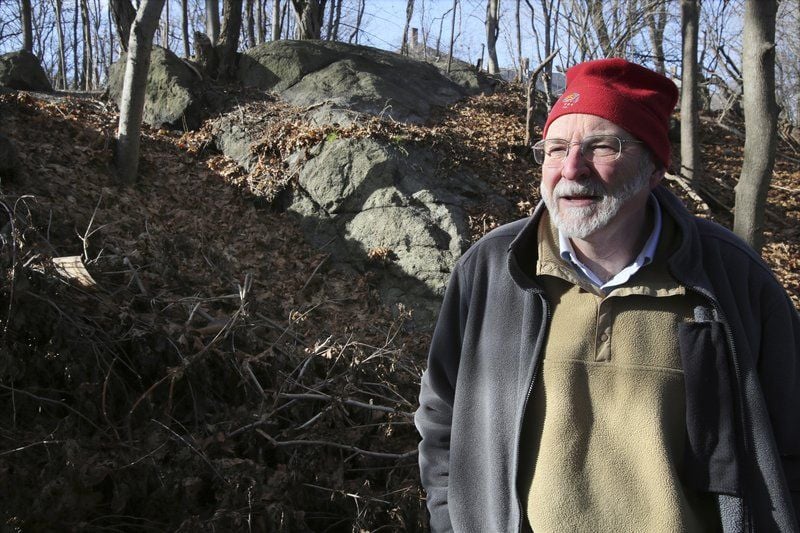 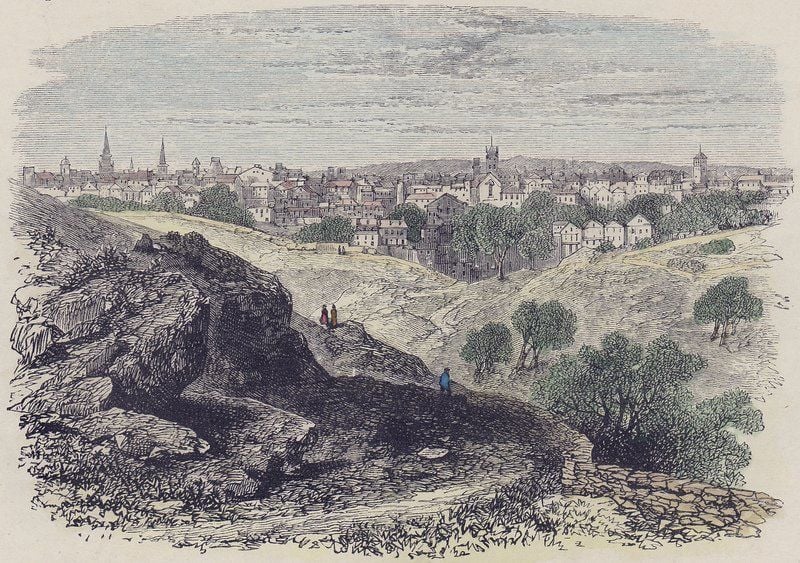 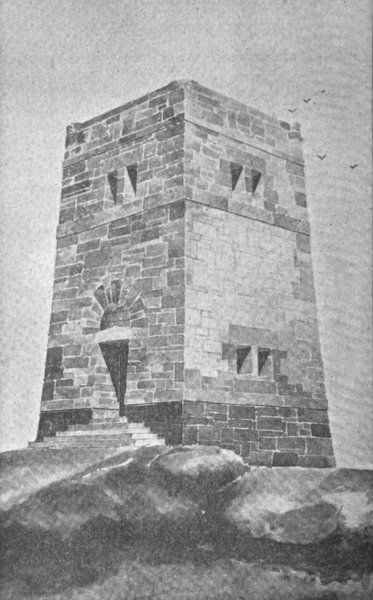 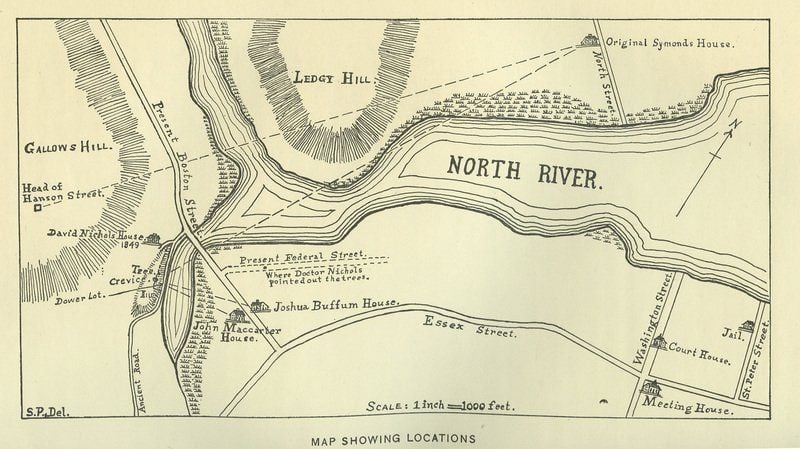 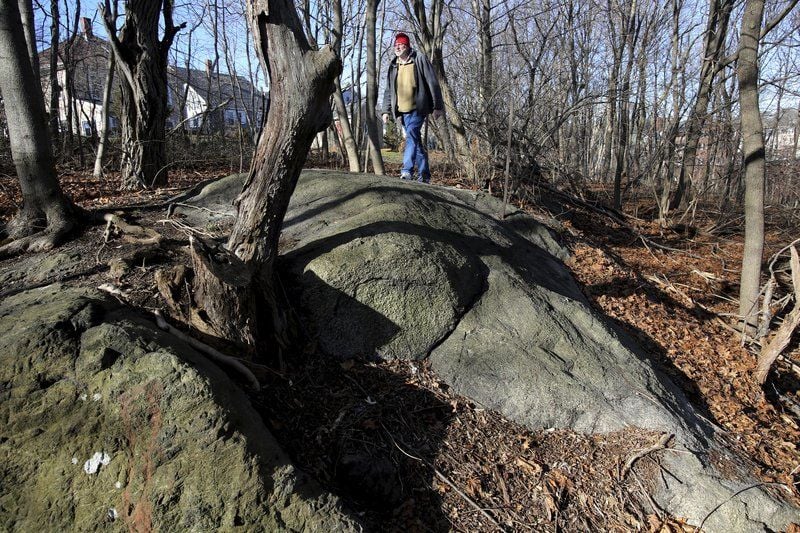 SALEM — Nearly 325 years after 19 people accused of witchcraft were hanged in this city, a group of scholars has finally confirmed the place where they met their fate: Proctor’s Ledge.

The Gallows Hill Project, a group of seven scholars, says they were able to definitively identify the location after five years of research, using court records, maps, ground-penetrating radar and aerial photographs.

Now the city intends to mark the location with a memorial, according to Mayor Kim Driscoll.

Proctor’s Ledge, a wooded, city-owned area that abuts Proctor and Pope streets, and described as a “rocky ledge ... at the base of the hill,” has been considered the most likely spot since the early 1900s, when historian Sidney Perley conducted research and settled on that location.

“There was never really a ‘eureka’ moment,” Baker said. “I think most of us — we’re talking about a number of scholars who were working on this — we knew Perley’s research was really good.”

Around 1,000 documents survive from the time of the trials, Baker said, making it “one of the best recorded events in early American history.” But missing are eyewitness accounts of the hangings, he added.

Gallows Hill, but where?

Traditionally, the hangings have been described simply as occurring at Gallows Hill, but that covers many acres of land. To determine exactly where the executions took place, a group of scholars was assembled in 2010 to examine the evidence.

They were able to combine their research and knowledge of the 1692 events, explore the possibilities, and also rule out that anything occurred on top of Gallows Hill.

“We’re pretty certain there’s nothing up there,” Baker said.

To memorialize the people who died there, the city is seeking Community Preservation Act funds to install a plaque there, as well as to clean the site up and prepare it for tourist traffic.

“Salem, long known for a dark time in our past when people turned on each, is now a community where people turn toward each other,” Driscoll said in a prepared statement. “Having this site identified marks an important opportunity for Salem, as a city, to come together and recognize the injustice and tragedy perpetrated against 19 innocent people.”

This is a sharp contrast from what was planned back in 1892 — a large memorial lookout tower, according to Baker.

At least 25 people died in the Salem Witch Trials. In addition to the 19 hanged, five died in prison awaiting trial. Another, Giles Corey, was crushed to death when rocks were placed on his chest in an effort to make him cooperate with the court.

While Baker said he and his team were excited to give the location legitimacy, he said they are simply “confirming the great work” that Perley did a century ago.

“I think we are all honored to be a part of this effort and are extremely happy that the mayor and the city are eager to see that the site is properly maintained and marked,” he said.

HOW THEY DID IT

The Gallows Hill Project prepared a series of questions and answers explaining how they confirmed Proctor’s Ledge as the execution site for accused witches.

How did they pin down the site?

Marilynne Roach discovered a few key lines of eyewitness testimony in a Salem witch trials court record from Aug. 19, 1692. ... The record quotes the defendant Rebecca Eames, who had been on her way to the court in the custody of her guards and traveled along the Boston Road, which ran just below the execution site.

A few hours later, she appeared the Salem court for her preliminary examination. The magistrate asked Eames whether she had witnessed the execution that took place earlier that morning as she was passing by. She explained that she was at “the house below the hill” and that she saw some “folks” at the execution. Roach determined that the “house below the hill” was most likely the McCarter House, or one of its neighbors on Boston Street. The McCarter house was still standing in 1890 at 19 Boston St.

What other evidence is there?

Professor Benjamin Ray conducted research that pinpointed the McCarter house’s location and worked with geographic information system specialist Chris Gist of the University of Virginia’s Scholars Lab to determine whether, in fact, it was possible for a person standing at the site of the house on Boston Street to see the top of Proctor’s Ledge. Gist produced a view-shed analysis, which determined that the top of Proctor’s Ledge was clearly visible.

Why did they rule out the top of Gallows Hill?

There are several reasons why the location at the top of Gallows Hill does not work. First, it would not have been visible from the McCarter house and its neighbors on Boston Street. It also would not have been visible from the Symonds house on North Street, where another person is known to have witnessed some of the executions. Furthermore, we know that the eight victims hanged on Sept. 22 were driven by cart to the execution site. It would have been next to impossible to get a cart full of eight victims up a steep and rocky slope that lacked a road.

Finally, executions were meant to be public events, so everyone could witness the terrible consequences that awaited those who committed witchcraft and other serious crimes. The top of Gallows Hill would be much more difficult to access than Proctor’s Ledge.

Did the project find anything on Gallows Hill?

Professor Peter Sablock carried out geo-archaeological remote sensing on the site with a team of his geology students. Ground-penetrating radar and electronic soil resistivity do not disturb the soil, but can tell us about the ground underneath. His tests indicate there is very little soil on Proctor’s Ledge. There are only a few small cracks in the ledge, and here the soil is less than 3 feet deep — certainly not deep enough to bury people.

This finding is in keeping with oral traditions that the families of the victims came under cover of darkness to recover loved ones and rebury them in family cemeteries. There is no indication that there are any human remains on the Proctor Ledge site.

What about the gallows?

The numerous surviving documents from the witch trials contain no mention of a gallows. Indeed, the only time Gallows Hill was used for executions was in 1692. Therefore, the team believes that the executions were carried out from a large tree, a common tradition at the time. The remote sensing research supports this conclusion, as no trace of structures were discovered, though admittedly a temporary wooden gallows would leave little evidence behind for archaeologists to discover.

SALEM — With the Salem Witch Trials' execution site publicly identified only earlier this week, the city is stepping up security there as the …

SALEM — When asked to describe Proctor's Ledge, some called it historic, internationally known ("They saw it in Tokyo"), quiet, overgrown and …

SALEM — City leaders are looking for nearly $180,000 from Community Preservation Act-generated cash to build a memorial to 19 victims of the S…

Top 10 most popular stories for 2016 on salemnews.com

Here are the top 10 most viewed stories for 2016 on salemnews.com.