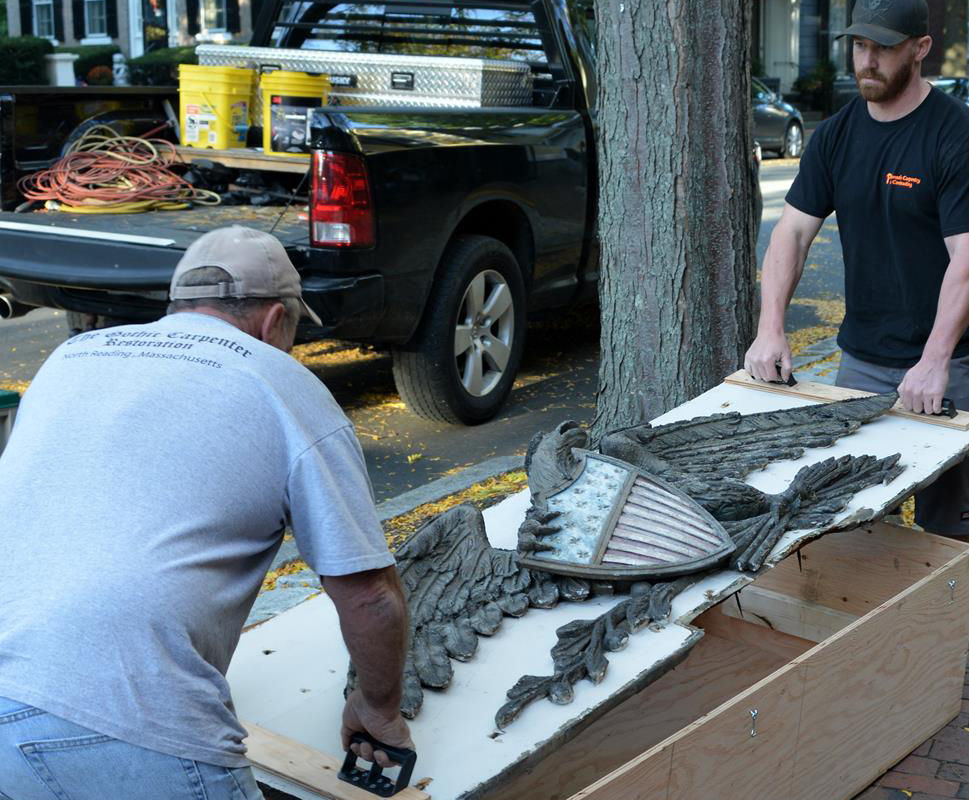 John and Charles Watson nestle the Samuel McIntire eagle into a box for transportation. 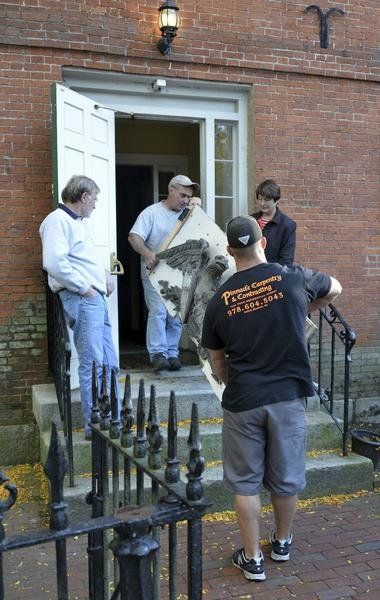 The Samuel McIntire eagle is gently carried from Hamilton Hall by John and Charles Watson.Courtesy photo

John and Charles Watson nestle the Samuel McIntire eagle into a box for transportation.

The Samuel McIntire eagle is gently carried from Hamilton Hall by John and Charles Watson.Courtesy photo

SALEM — After more than 200 years, the Hamilton Hall eagle has come in from the cold.

A surviving masterwork by Salem’s Federalist era architect Samuel McIntire, the eagle was carved in relief in 1805 to decorate the top of the Chestnut Street side of the celebrated red brick hall, which he also designed. The caretakers of the hall recently decided to remove the eagle and bring it inside, with plans to eventually replace it with an exact replica made of more durable material, polyester resin, drawn from a mold.

Stan Usovicz, a former Salem mayor, is the newly elected president of the Hamilton Hall board.

“Our fear was that it might disintegrate before it could be restored,” Usovicz said. That could not be allowed to happen, he indicated. “Knowing the rarity of it, knowing the significance of it to Salem — well, that speaks for itself.”

Dean Lahikainen, the Carolyn and Peter Lynch Curator of American Decorative Art at Peabody Essex Museum and an expert on McIntire, examined the relief after it was brought inside. He was surprised at how well it has fared after more than 200 years of nor’easters, rain, lightning and New England winters.

“It’s in pretty remarkable shape,” Lahikainen said. “The quality of the wood was good.” Exactly what kind of wood was used hasn’t yet been determined. “There were layers of protective paint.” Additionally, the relief probably got some shelter by being set back slightly into the brickwork.

It was flanked by four reliefs, two on each side, depicting a kind of drapery.

The restoration will be done by Boston conservator Christine Thomson, who is already at work on the project. Creating the new bird will be sculptor Robert Shure of Skylight Studios. Responsible for transporting the art was carver John Watson.

When it came to putting an eagle at the top of his Hamilton Hall, McIntire broke the rules, Lahikainen said, He started with the great seal of the United States adopted in 1792, but he interpreted the seal in a way not done before, Lahikainen said.

“McIntire reconfigured the bird,” he said.

The seal depicts a bald eagle. A fierce-looking bird is clutching arrows in one claw — symbols of American strength — and olive branches in the other — symbols of the search for peace. A shield in red, white and blue, signifying the original 13 states, protects the animal’s breast.

McIntire’s eagle retains these elements, but he spreads the wings wider and drops the shield lower. The olive branches are there, but only one claw is seen, and it is clutching the arrows.

McIntire’s skill as a wood carver was unique, Lahikainen said. His somewhat stylized eagle was soon copied and expanded on everywhere. That it was influential shouldn’t have been surprising. Historian Phillip Issacson, who devoted an entire book to such carvings, rated this one “the archetype of all eagle relief carvings ... unequaled in its boldness and conviction. The coherence and freshness of the work are unrivaled by any other work of similar form ... few eagles are of such consummate quality that they fully personify the spirit of our Republic.”

The Hamilton eagle was one of two that McIntire was known to have carved. The other hung on an earlier version of the customs house. This is the only one to survive.

McIntire’s overall impact on Salem remains strong, with many surviving homes designed during the boom of years of the China trade still in existence and still much admired. He was a man of many talents, according to Lahikainen, also excelling as a furniture maker, his products much sought after to this day. In his architecture can be seen the influence of Boston’s Charles Bullfinch, who designed, among other things, the Statehouse and parts of the U.S. Capitol.

The cost of preserving and replacing the eagle is estimated at $35,000, according to Usovicz, and the Hamilton Hall board is looking for donors to help. The original eagle, once preservationists have gone over it, will find a place of honor somewhere in the hall. Usovicz hopes to see the replica eagle on its perch by June or July.

“In short,” wrote Hamilton board member Peter Cohen, “we are talking about a national treasure, and it is time to give it another life where it can appreciated by generations of Salem residents and visitors to come.”

Donations can be sent to 9 Chestnut St., Salem, Mass., 01970 or through the Hamilton Hall website at http://hamiltonhall.org.

Alan Burke can be reached at aburke@salemnews.com.