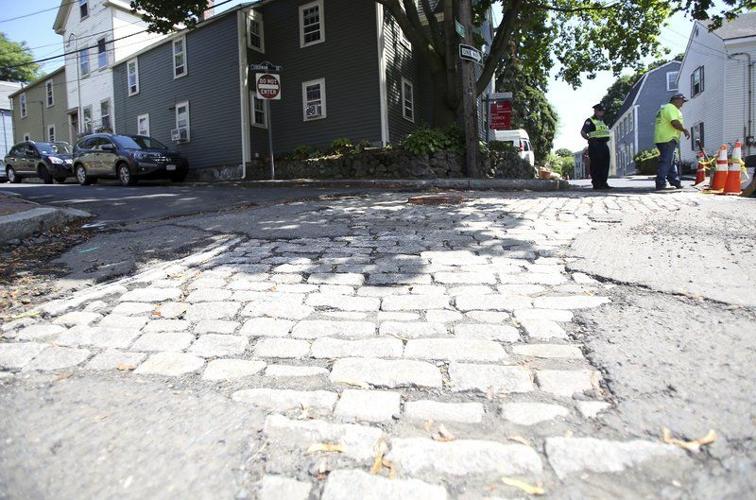 These old cobblestones were unearthed while and area near River and Lynn streets was being repaved. Neighbors want to save the cobblestones, but the city has concerns about safety for bicyclists and the disabled. 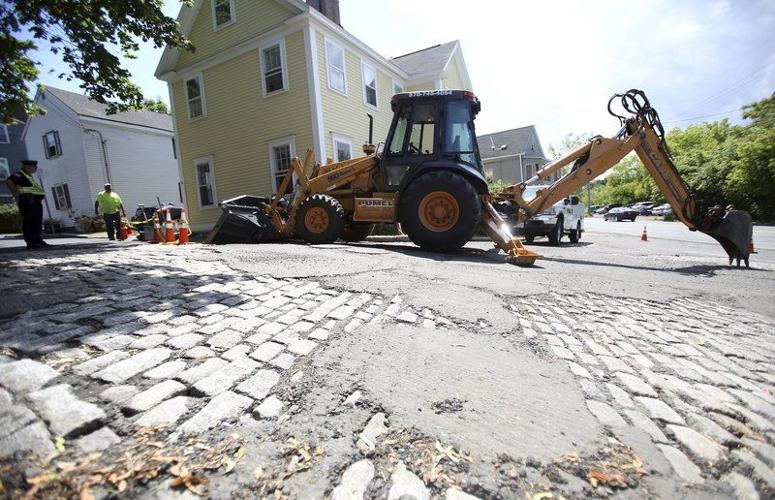 Construction work to repave the end of River and Lynn streets in Salem revealed some old cobblestones that residents are battling to preserve.

These old cobblestones were unearthed while and area near River and Lynn streets was being repaved. Neighbors want to save the cobblestones, but the city has concerns about safety for bicyclists and the disabled.

Construction work to repave the end of River and Lynn streets in Salem revealed some old cobblestones that residents are battling to preserve.

SALEM — Recent paving work at the intersection of Bridge, Lynn and River streets has unearthed a swath of once-buried cobblestones that has brought city engineering plans to a grinding halt.

Now, people who live in the area are calling for the the city to preserve the old cobblestones, and a heated debate has arisen over how to proceed.

River Street resident John Carr, who is leading the charge to save the cobblestones, says they "set the tone" as you enter the historic McIntire District, and also serve to slow down traffic.

But for bicyclists and the disabled, cobblestones can be a hazard. And Mayor Kim Driscoll notes that preserving the cobblestone comes at a cost.

"It's much simpler to just lay down pavement than reset cobblestone," the mayor said. "It will need to be raised to be consistent."

The controversy arose as the city was repaving roads along Bridge Street, and routine milling — to eliminate the old surface — revealed "a whole field of cobblestones," said Carr.

"I happened to be leaving for a weekend with my kids," he said. "As I'm coming down the street, we saw them and I sent out an email to my neighbors. I said, 'Have you all seen the cobbles?' and 'Is there any interest if we can see if we can lobby with the city in retaining them?'

"By the time I hit Sturbridge, I think I had 45 responses," Carr said, "all of them passionate, all of them enthusiastic."

The area is triangular in shape, where Lynn and River streets connect with Bridge Street, according to City Engineer Dave Knowlton. It's about 50-by-100 feet in size.

"When we milled it out, big sections of pavement came up and exposed the cobbles that were there," Knowlton said. "The neighbors noticed and asked if we could preserve those and keep them the way they are."

The cobblestones are a distant nod to history in the neighborhood, according to Carr.

"We halted the paving to get a better handle of the situation and what options we have," she explained.

Carr says the cobblestones provide a number of benefits to the area, not only by preserving an historic look, but by slowing down speeders.

"In the past three weeks those cobbles have been exposed, the effect on speeding traffic entering the McIntire Historic District has been enormous," he said, causing drivers to slow down.

But not everyone is enthusiastic.

"It makes sense, but cobblestones are really not the preferred material for a roadway," Knowlton said. "They're uneven, difficult for bikes to go across."

Bikers wouldn't be the only people having trouble getting over the cobblestones.

"If you're pushing a baby carriage or using a cane, if you're using a wheelchair — powered or manual — forget it," said Mary Moore, executive director of the Independent Learning Center of the North Shore. "They become an impediment."

The city has come up with a compromise — raise and preserve some, but not all, of the cobblestones.

Knowlton said they'd leave "two strips of cobbles 30 inches wide at the end of each road, which will kind of give the drivers there and people who walk there an indication that they're going into a historic neighborhood."

But Carr said that's "like putting a Band-Aid on. It's too little, too late." He wants all of them preserved.

A meeting was scheduled for Tuesday morning between Driscoll, Knowlton, representatives from the neighborhood, Councilor Famico and others to discuss how to go forward. Famico has also submitted an order asking the City Council's committee on government services to discuss it.

"We want to be able to preserve as many as we can," Famico said, "but we also have to take safety considerations and finances into mind."

A majority of the neighborhood is backing the stripe plan, according to Famico.

"Eighty percent of those who hear the compromise are in favor of it," she said.

"The one thing I don't want, and I don't think any of my neighbors want, is to have the city come in with a backhoe and just pick them up and remove them," he said. "They repave about every 30 years. I'm 66. I'm still hoping to be around for the next paving.

"But maybe there will be a more enlightened administration then, if we fail now."