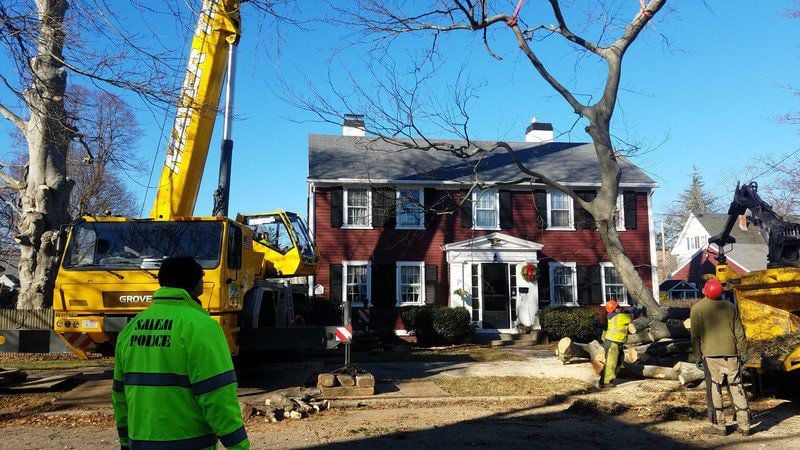 DUSTIN LUCA/Staff PhotoA crew with Essex-based Mayer Tree Service takes down a European beech tree, believed to be nearly 200 years old, at the corner of Dearborn and Orchard streets on Monday. 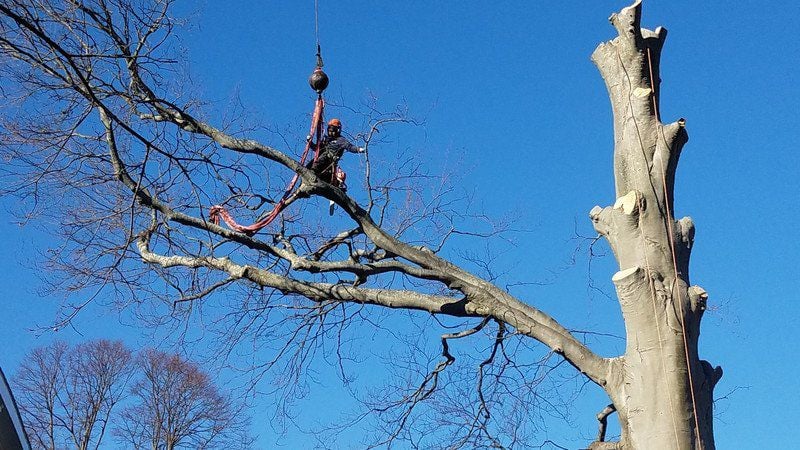 DUSTIN LUCA/Staff PhotoMauricio Lopez, an employee with Essex-based Mayer Tree Service, secures two branches being taken from a European beech tree at the corner of Dearborn and Orchard streets on Monday. 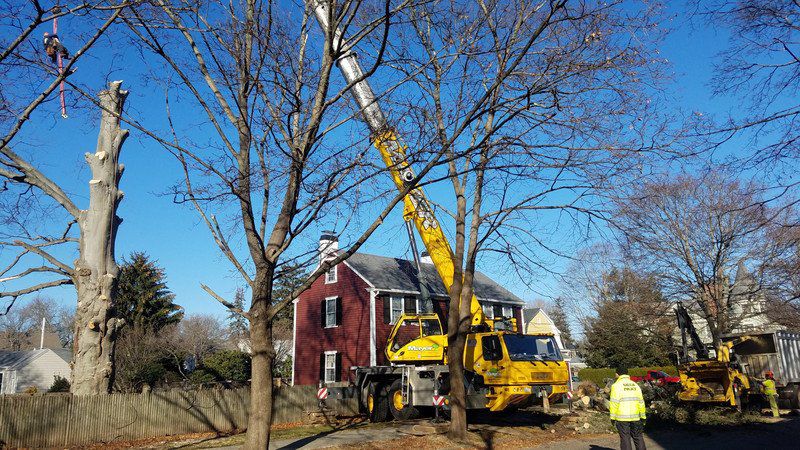 DUSTIN LUCA/Staff PhotoA crew with Essex-based Mayer Tree Service takes down a European beech tree, piece by piece, at the corner of Dearborn and Orchard streets on Monday. The tree, planted long ago in honor of Nathaniel Hawthorne, will be turned into bowls and other gifts at Boston Woodturning in downtown Salem.

DUSTIN LUCA/Staff PhotoA crew with Essex-based Mayer Tree Service takes down a European beech tree, believed to be nearly 200 years old, at the corner of Dearborn and Orchard streets on Monday.

DUSTIN LUCA/Staff PhotoMauricio Lopez, an employee with Essex-based Mayer Tree Service, secures two branches being taken from a European beech tree at the corner of Dearborn and Orchard streets on Monday.

DUSTIN LUCA/Staff PhotoA crew with Essex-based Mayer Tree Service takes down a European beech tree, piece by piece, at the corner of Dearborn and Orchard streets on Monday. The tree, planted long ago in honor of Nathaniel Hawthorne, will be turned into bowls and other gifts at Boston Woodturning in downtown Salem.

SALEM — One of the city’s oldest and tallest trees came down on Monday, but its spirit will live on in the form of wooden bowls, table tops and more.

The 85-foot-tall European beech tree, believed to be nearly 200 years old, was one of the last vestiges of the historic Manning Garden in North Salem. The tree stood at the corner of Orchard and Dearborn streets until Monday, when it was carefully removed by Essex-based Mayer Tree Service, after losing a brief battle with phytophtora citricola, a plant pathogen.

As the tree was taken down, the Rainville family and close friends hosted a celebration honoring the tree, complete with pastries and appetizers. More than a dozen feet of the tree’s best wood was then taken by Tom Gagnon of Boston Woodturning, a shop at Artists Row downtown, to be turned into all sorts of gifts for the Rainvilles and eventual sale to the public.

“The tree, we think, was planted in 1825,” said Loretta Rainville, who bought the property in the early 1960s and raised a family under the tree’s towering branches. “According to Rebecca Manning ... for some reason, she was 99 when she was interviewed and she said it was (planted in) 1875 for the centennial. So there’s a controversy here.”

Rainville then pulled out a folder full of newspaper clippings, planning maps and more. She pointed to a survey done of the area in 1825 showing an “American beech” where the European beech stood until yesterday.

“She wrote, if anybody hurt her tree, she’d know it from the grave,” Rainville said, laughing.

“We’re going to get haunted tonight,” added her daughter, Judith Rainville. “I sleep in her room, and I’m waiting for company tonight.”

That concern was allayed by Carol Rainville, Loretta’s niece.

“I think she knew the tree needed to be something different now,” Carol said.

The tree had connections with Nathaniel Hawthorne and served as the signature tree in a garden, which owner Robert Manning, a fruit grower, created where several homes stand today along Dearborn Street. Manning built a house there in 1824, according to a story published in 1929 in The Salem News.

A few years later, he built a neighboring home for his sister, Elizabeth Clarke Manning, who was the mother of Nathaniel Hawthorne. At some point, the tree was planted by Hawthorne’s cousin as a gift for him. The Manning Garden, meanwhile, would grow and become widely known for its pear trees; more than 1,000 varieties were supported by the site at one point, and several of those pear trees still exist today.

The Rainvilles moved into the property around 1962 or 1963. Part of the draw, Loretta Rainville said, was the towering tree. It was so tall that she could see it from downtown Salem, where she worked as an executive assistant to the sheriff.

“It was my troll universe,” Judy said, laughing. “There was so much in the trunk. You could see the trunk system.”

Each year for the tree opened with small green leaves, which seasonally yielded to pink and red tones. Then copper would take over — “a beautiful copper color,” Loretta Rainville said.

“Remember the Memorial Day parties?” asked Carol Rainville. “We’d climb the rope swing, and there were branches we could climb on.”

“We had the annual family get-together here, maybe 35 to 40 people or something, and it was usually around Memorial Day,” explained Loretta Rainville. “All the nieces and nephews would look forward to coming and being under the tree.”

But as time went on, the tree began to deteriorate. In the last few years, it started shedding small, dead branches and twigs. Arborists were called in to see what was going on, leading the family to the diagnosis of the disease that sealed the tree’s fate this week.

It became clear that the tree’s time was running out. After a quick search, the family contacted Boston Woodturning, which now has control over much of the tree’s lumber.

“I only work with wood from felled trees,” Gagnon said. “It’s a process. The first step is taking the tree down, and you’ve got logs. What I do is recut them several times into separate blanks.”

The blanks are then treated to preserve them before being turned into a variety of products at the shop. In this case, that will include bowls, hollow-form vases and tabletops.

Surprisingly, this kind of story is routine for Gagnon, who recently took a tree cut down in Orne Square and turned it into gifts for about 15 neighbors. Still, he said, there’s something special about the Manning tree.

“This is the biggest one,” he said, “and I’ve had some really large trees.”

Anyone who considers this story a tragedy will be relieved by its closing paragraphs: a message of hope for a future generation of beech trees. This was noted by Armand Laselva, a friend of the family who attended the celebration on Monday.

“There’s new life coming with a sapling that’s growing; that has to be transplanted next summer,” he said, pointing to underneath the tree.

Then someone noted there are actually two saplings — twins, drawing a smile from Laselva.