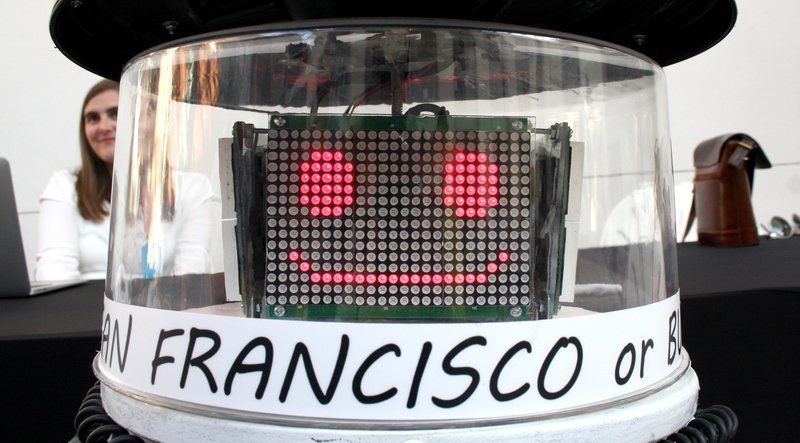 hitchBOT, a hitchhiking robot, launched its summer plans yesterday at Peabody Essex Museum. The robot seeks to travel to San Francisco, but only by hitching rides from the public. 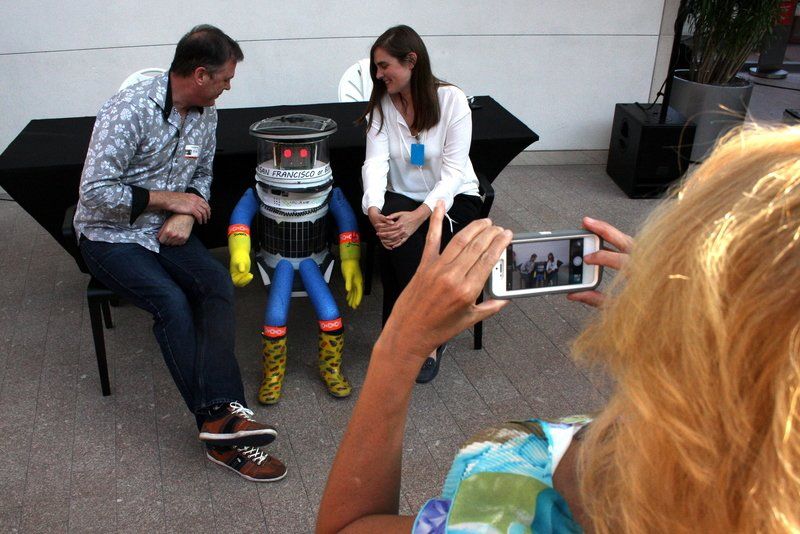 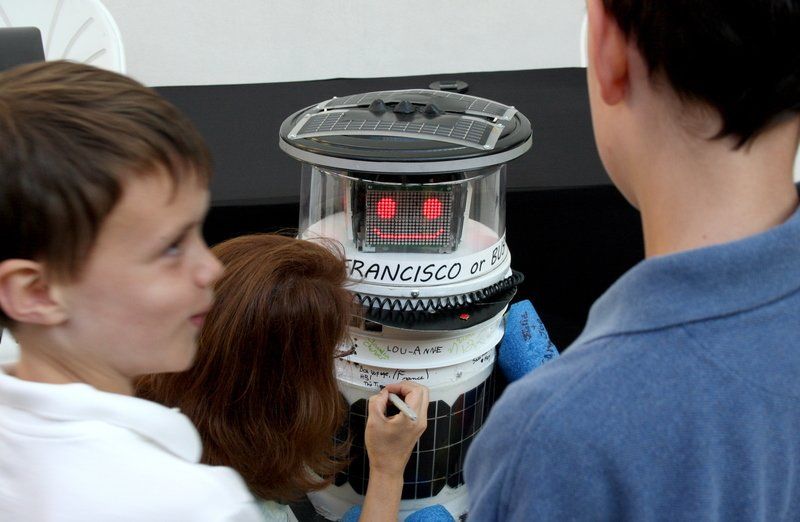 Swampscott mother Maura Fitzgerald writes “Bon voyage!” on hitchBOT, a hitchhiking robot that kicked off a cross-country journey at Peabody Essex Museum last night, as her children Calum, 7, and Andrew, 9, look on. 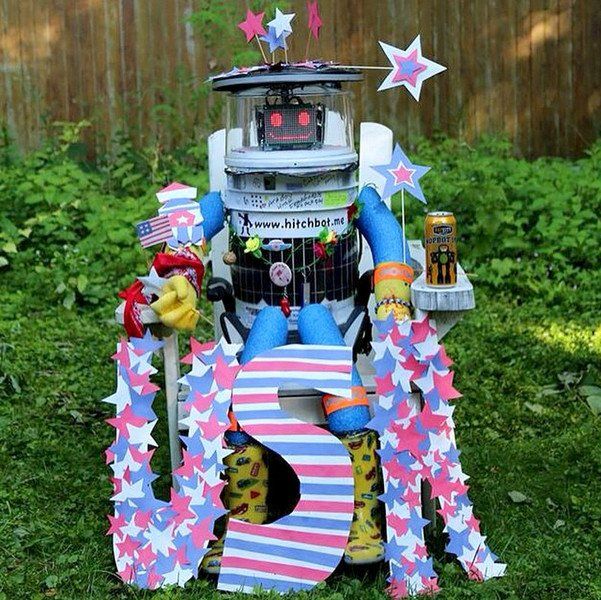 hitchBOT, a hitchhiking robot built to show that robots can trust humans, poses for a photo as it announces its plans to hitchhike across the United States.

hitchBOT, a hitchhiking robot, launched its summer plans yesterday at Peabody Essex Museum. The robot seeks to travel to San Francisco, but only by hitching rides from the public.

Swampscott mother Maura Fitzgerald writes “Bon voyage!” on hitchBOT, a hitchhiking robot that kicked off a cross-country journey at Peabody Essex Museum last night, as her children Calum, 7, and Andrew, 9, look on.

hitchBOT, a hitchhiking robot built to show that robots can trust humans, poses for a photo as it announces its plans to hitchhike across the United States.

With bits of pool noodles for arms and legs, solar cells on its head and red LEDs displaying a bright-eyed smile several inches wide, a bucket-shaped robot has one simple goal in life: Going wherever you want to take it.

Peabody Essex Museum was the scene of a hitchhiking journey kickoff Thursday night as “hitchBOT,” a robotic tourist hitting the United States this summer, started its journey from Salem to San Francisco.

The child-shaped robot is described on its website and through social media as “an outgoing and charismatic robot” that has already completed solo hitchhiking treks across Canada, Germany and the Netherlands.

The bot talks using conversational artificial intelligence known as Cleverscript, and it comes equipped with a GPS tracker, an on-board camera and a bucket list constituting a legendary summer vacation.

But there’s a bigger meaning to hitchBOT, one that two Canadian researchers feel they can prove: Human beings really aren’t so bad after all.

“It’s a very important question, to say, do we trust robots?” said Frauke Zeller, an assistant professor at Ryerson University in Ontario and co-creator of the robot. “In science, we sometimes flip around questions and hope to gain new insight. That’s when we started to ask, ‘can robots trust humans?’ ”

The answer (spoilers ahead) is yes. But Zeller wasn’t so confident when hitchBOT was sent off on its first journey and picked up road-side by strangers on an as-yet-undetermined series of travels.

“We set it out on its own, said bye-bye, and that’s it,” she said. “I was quite nervous because I used to do human-robot interaction experiments in the past, and everything’s quite controlled — a controlled lab environment.”

What happens when you put a robot at the mercy of random people on the road?

“In some cases, it was left at a tourist information place. Sometimes it was a campground,” said David Harris Smith, the second co-creator and an assistant professor at McMaster University, also in Ontario. “A band had it for a while and it hung out at a bar for a week. It’s really unpredictable.”

As hitchBOT moves across the United States, it carries a bucket list 16 items long. It seeks to do everything from stopping to see the lights of Times Square to listening to jazz music in New Orleans and taking a selfie with the Hollywood letters in California.

On its website, hitchBOT says its “final destination is the Exploratorium in San Francisco, California. Only time will tell how long my journey will take me. I cannot wait to make new friends.”

Thursday night’s PEMPM, a monthly social event at Peabody Essex Museum, doubled as a goodbye party for hitchBOT and its creators.

But the robot had a following, with many people stopping by to see the robot and identifying as already following it on social media.

“Since putting out the press release, the amount of attention it has gotten is amazing,” said Doneeca Thurston, adult program coordinator at Peabody Essex. “Who knows? Maybe one of our attendees will take it on its first journey tonight.”

Salem resident Carrie Dichter started reading up on hitchBOT before it was even on Facebook or Twitter. She was psyched to see it start its fourth journey in her community.

“I love anything that is a social experiment,” she said. “I think it’s great.”

“I want it to see as much of Massachusetts — seeing as I’m from here — as it can before it leaves the area,” O’Neill said.

Maura Fitzgerald, of Swampscott, learned about hitchBOT this week after hearing about it from a friend.

“I hope people are inspired to take him to every amazing corner of America,” she said, “that it isn’t a linear path across the States; that it brings out the good in people.”

In a way, it already has.

Zeller recalled a moment during the robot’s journey across Canada, when its transmissions went dry for two days. Social media followers just about had a heart attack.

“People were so concerned. ‘Should we go out there to look for it?’ ‘What happened?’ ” she said. “It has thousands of people looking out for it.”

Trouble could befall hitchBOT along the way, as Zeller said that’s part of the experiment’s design. But that’s a feeling that isn’t exclusive to the at-times turbulent United States road system.

“We wanted to come here because hitchBOT has so many fans in the States already,” she said. “In any country, you’ll never know whether it’ll meet some people that have problems with it or don’t like it.

“That’s part of the experiment.”

ANYWHERE: Do the wave at a sports game

MISSOURI: Stand under the Gateway Arch

SOUTH DAKOTA: Be the fifth portrait on Mount Rushmore

UTAH: See the house from Pixar’s “Up”

WASHINGTON: Be sleepless in Seattle

Locals who met hitchBOT as it started his cross country trek on the North Shore two weeks ago are mourning the robot’s recent misfortune.