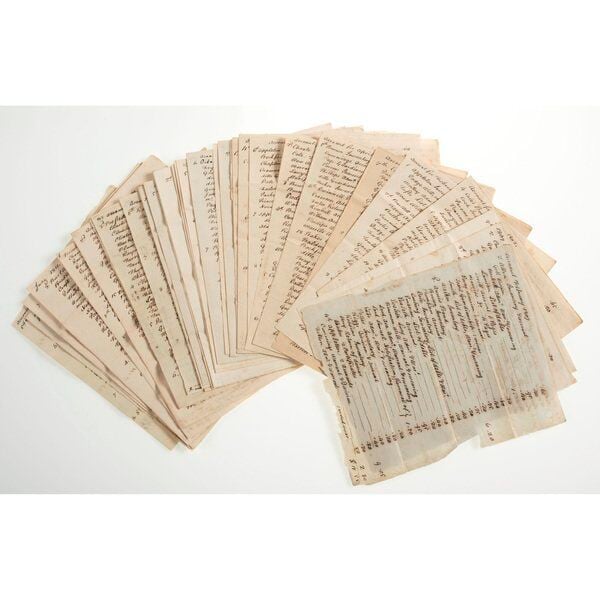 Photo courtesy Cowan’sMore than 200 letters, predominantly written by well-known Danvers politician Samuel Holten, are expected to fetch between $10,000 and $15,000 at an auction on Friday. 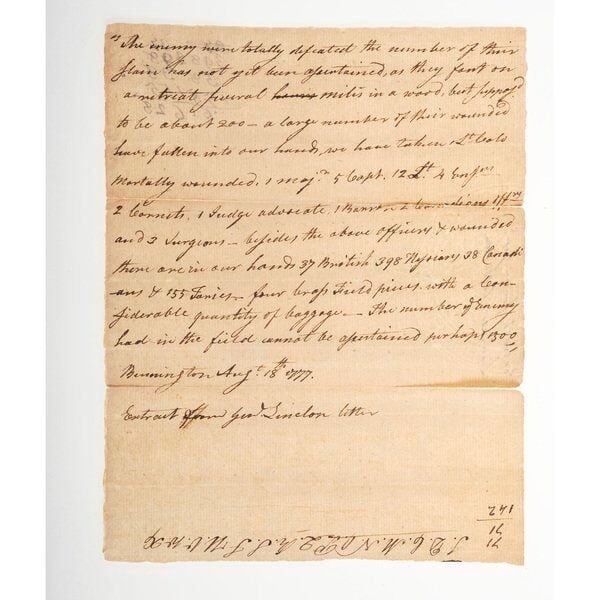 Photo courtesy Cowan's The majority of documents in the collection are draft copies of letters which Samuel Holten sent to friends, family and fellow politicians.

Photo courtesy Cowan’sMore than 200 letters, predominantly written by well-known Danvers politician Samuel Holten, are expected to fetch between $10,000 and $15,000 at an auction on Friday.

Photo courtesy Cowan's The majority of documents in the collection are draft copies of letters which Samuel Holten sent to friends, family and fellow politicians.

DANVERS — More than 200 letters, predominantly written by well-known Danvers politician Samuel Holten, are expected to fetch between $10,000 and $15,000 at an auction on Friday.

The letters, written between 1741 and 1851, are being auctioned off by Cowan’s, an auction house in Cincinnati, Ohio. The auction begins at 10 a.m., and bidders can participate in person, over the phone or by using Cowan’s website.

“It is very rare that a collection of this size and significance from the Revolutionary War era comes along,” said Emily Payne, a specialist in American history at Cowan’s. “People aren’t just walking in our doors with collections like this every day, so this is very exciting.”

Holten, according to Cowan’s website, was an enthusiastic supporter of the Patriot cause during the American Revolution and was a passionate politician. He was elected to numerous political bodies at both the state and federal levels including the Massachusetts Provincial Congress, the Continental Congress, the Massachusetts State Senate, and the U.S. House of Representatives.

The majority of documents in the collection are draft copies of letters which Holten sent to friends, family and fellow politicians.

Payne said not only is the fact that the letters are from the Revolutionary War era exciting, but “also in this case, the content is very exciting.”

She said, “We may see things like Revolutionary War Era pay stubs, enlistment announcements and things like that which are interesting, but maybe not as exciting or rare. Because Holten was such an important figure in not only Massachusetts history, but also in a real sense, our country’s history. Even though he is lesser known, he was very actively involved in the goings on at the time at the state and national levels.”

Payne said the collection of letters — along with numerous other items from a variety of time periods — was brought to Cowan’s by an individual collector from the South.

The estimated value of the collection, Payne said, was determined by looking at how much other items related to Samuel Holten and the Revolutionary War have sold for at auction.The size of the collection and the fact that Holten was an important political figure were also taken into account.

Payne said she feels incredibly lucky to work with collections such as this trove of Holten letters.

“We know the names of so many of the founding fathers, but when you read an archive like this, and when you read through his letters, you can see how there are so many other men — and perhaps women too — who were involved in the creation of this country who are not household names, but are Founding Fathers in their own right. These delegates to the Continental Congress, who were instrumental in ratifying conventions and things like that, we’re working so hard to really craft the constitution and create the laws of this country. That is one of things this archive reminded me of: these unsung heroes.”

Payne also pointed out that the North Shore possesses its own impressive collection of Samuel Holten papers.

“He has papers in institutions all in and around Boston, and I know in Danvers, The Peabody Institute Library has diligently collected things related to him, because he’s from Danvers.”