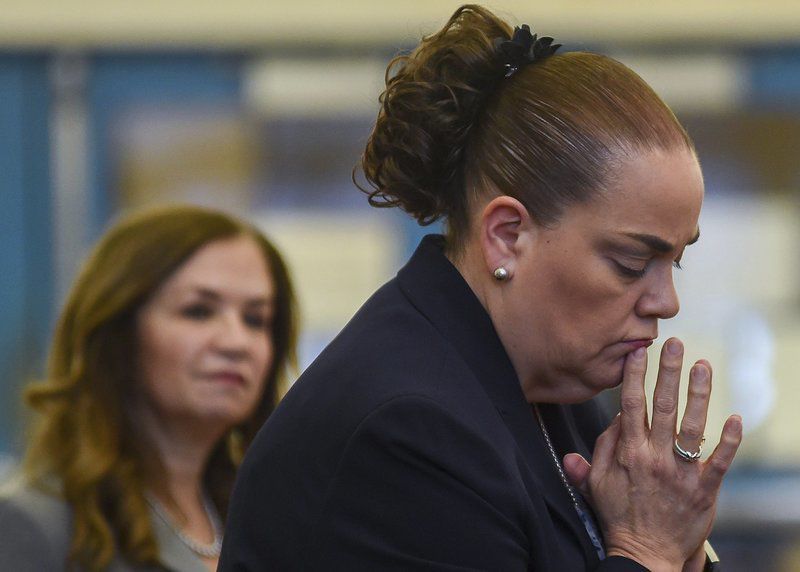 Superintendent Margarita Ruiz reacts after hearing parents’ comments about the changes at the Salem High School. New Salem High School Principal Vittoria Pacifica, at left, was on hand for Thursday’s session with parents. 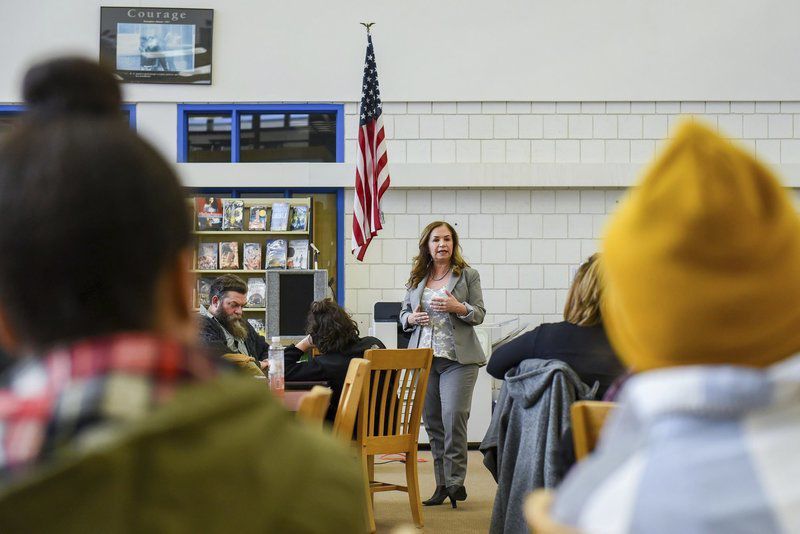 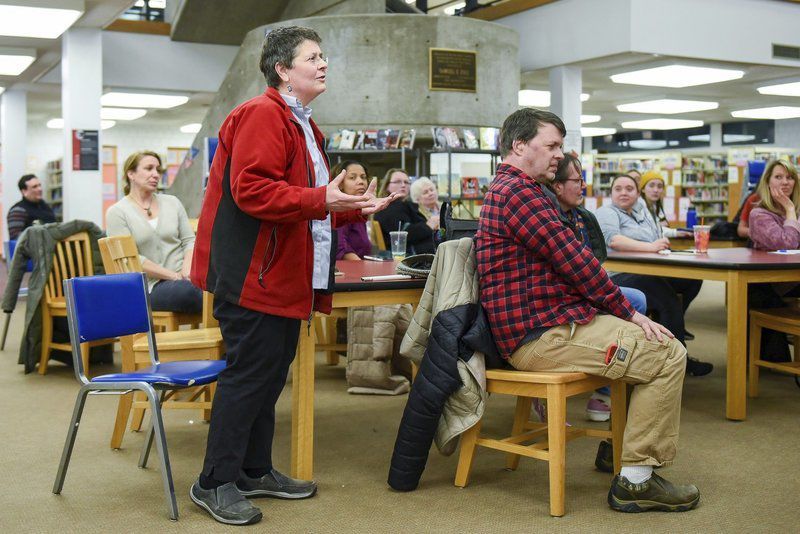 Susan Cayouette shares her thoughts regarding the inconsistencies at the Salem High School in Salem. 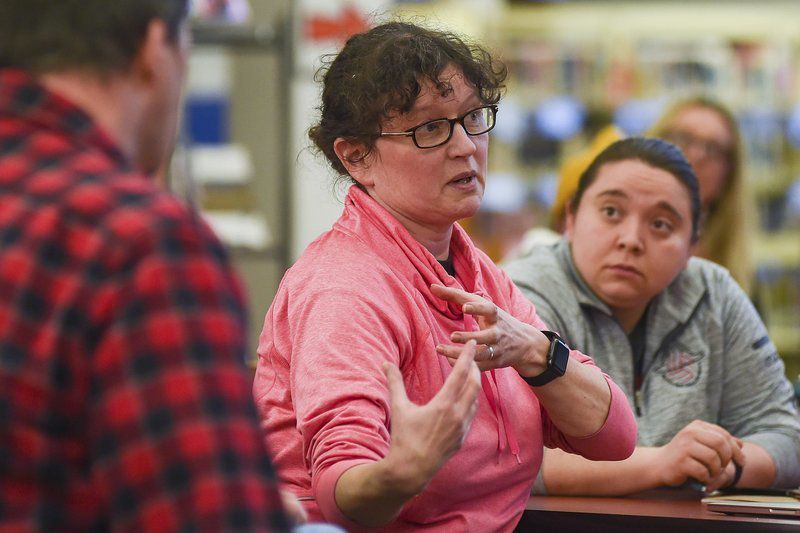 Christine MacTaylor raises the issues regarding schedule changes taking place at the Salem High School. Her child is an eight-grade student preparing for the transition to high school.

Superintendent Margarita Ruiz reacts after hearing parents’ comments about the changes at the Salem High School. New Salem High School Principal Vittoria Pacifica, at left, was on hand for Thursday’s session with parents.

Susan Cayouette shares her thoughts regarding the inconsistencies at the Salem High School in Salem.

Christine MacTaylor raises the issues regarding schedule changes taking place at the Salem High School. Her child is an eight-grade student preparing for the transition to high school.

SALEM — Parents and students expressed anger and frustration over the state of Salem High School on Thursday night, a day after the stunning resignation of the school’s first-year principal.

About 70 people gathered in the school cafeteria for a meeting called by Superintendent Margarita Ruiz to answer questions about the resignation of Principal Jennifer DeStefano and the same-day hiring of a new principal, Vittoria Pacifico.

Audience members questioned Ruiz about that tumultuous turn of events, but spent much of the evening blasting Ruiz and her administration for what they described as a lack of communication and a “culture of distrust.”

“I don’t know what to do — jump ship and leave the city I grew up in?” said Shannon Lane, who has four children in the Salem schools, addressing Ruiz. “You don’t give us straight answers. It’s a runaround.”

Audience members painted a picture of an administration that makes decisions without consulting or informing parents and students. Their complaints ranged from a plan to change students’ schedules to classes with no teachers and even a phone system that doesn’t work.

Ruiz took the criticism and attempted to provide answers for more than two hours. She acknowledged that communication has been lacking, and she cited that factor as a major reason for DeStefano’s sudden departure.

Salem High School — with about 900 students — is ranked among the bottom 10 percent of high schools in Massachusetts, according to the Department of Elementary and Secondary Education. The school is in the midst of a “redesign” in an effort to improve that ranking. But parents and students said they are often left in the dark about why the changes are being made and when they are being implemented.

One of the biggest impending changes involves the students’ schedule and how many classes they can take. The lack of uncertainly is making it difficult for students to pick their classes for next year, at a time when many of them are beginning to consider their college choices, students and parents told Ruiz.

“This is a group of kids that has been through enough,” said Sarah Vozzo, noting that her daughter, a junior at the high school, has had 11 principals in her time in the Salem schools. “We’re done being the guinea pigs and sitting back and taking it.”

The crowd broke out in applause at Vozzo’s comment.

Ruiz said no decisions have been made on the schedule change and that students and parents will be kept up to date.

Some parents questioned Ruiz about the seeming simultaneous resignation of DeStefano and hiring of Pacifico, an educational consultant and former principal at a private Catholic girls’ school in Rhode Island.

Ruiz would not answer a question about when she first knew that DeStefano would be leaving. Ruiz announced on Wednesday that DeStefano had resigned that day for personal reasons, effective immediately.

“I have to say I was not blindsided by the resignation,” Ruiz said. “We had had a series of difficult conversations.”

Asked how she selected Pacifico so quickly, Ruiz said, “This time of year I get a lot of inquiries from people looking for jobs. This is hiring season. I’m always on the lookout for talent for the Salem Public Schools. I reached out to Dr. Pacifico, and when Ms. DeStefano resigned, I had already learned about Dr. Pacifico.”

Ruiz said she hired Pacifico so quickly, and for a term of 18 months, in order to ensure stability and continuity at the high school.

“An interim principal would have meant another level of uncertainty,” Ruiz said.

Ruiz introduced Pacifico to the audience, saying she has 24 years of experience in education and a “proven track record.”

Pacifico said she received a warm welcome from students, teachers and administrators as she spent the day at the high school, including meetings with students at assemblies and during lunch.

Pacifico told the audience that her parents moved from Italy to the United States when she was 8 years old, and didn’t know a word of English, to provide her and her brother with a better education. She ended up earning a doctorate and her brother is a heart surgeon, she said.

“I am a risk-taker because my parents took a risk to uproot their family for a better life,” she said.

Nick Galeota, whose son is a sophomore at the high school, said he was “excited for the change, but I do have a lot of concerns,” noting that Pacifico has been a principal in private schools.

Pacifico said she spends a lot of time in public schools in her job as a coach for principals who are attending graduate school at Harvard University, and said her degree is in urban education.

“What a great fit this is for me,” she said of Salem. “It’s a wonderful opportunity. We’re going to make these decisions together. I’m a huge collaborator.”

DeStefano was under a two-year contract that was not set to expire until June 30, 2020. The contract required her to give at least 90 days notice if she wanted to terminate it. But Kelley Rice, a spokeswoman for the school district, said earlier in the day that the district waived that clause. DeStefano was making $130,000.

Read our coverage of the abrupt turnover in principals at Salem High School, as well as the resulting departure of the superintendent, this spring.