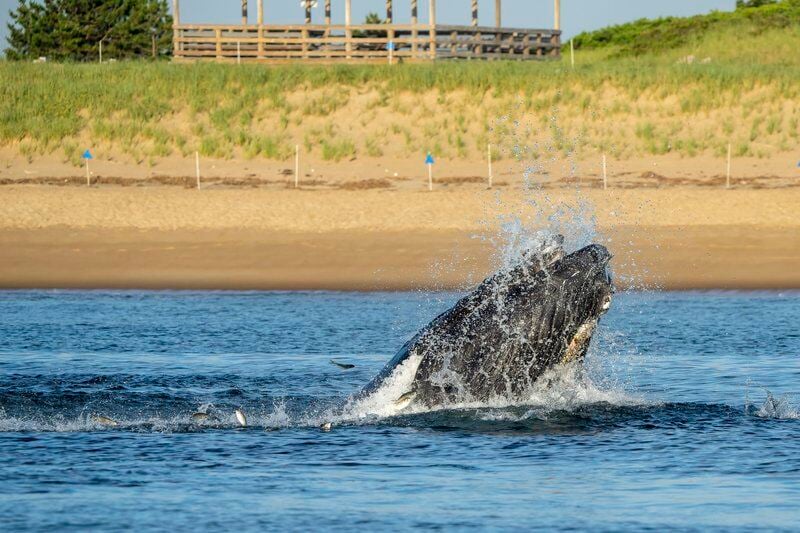 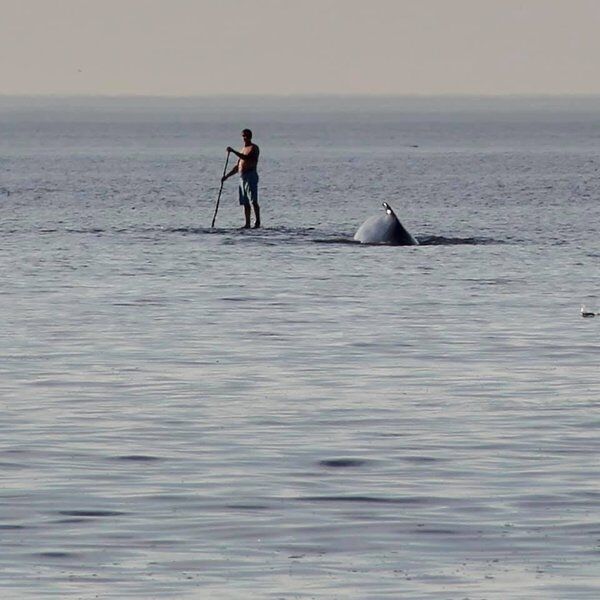 NEWBURYPORT — Residents and tourists alike have caught glimpses of whales feeding on schools of fish off the shores of Plum Island and Salisbury Beach this week.

Ashley Stokes, director of Marine Mammal Rescue at Seacoast Science Center in Odiorne Point State Park in Rye, New Hampshire, said whales can be spotted close to shore during the summer, but these sightings seem to be happening earlier than in the past couple of years.

The sightings usually start when schools of menhaden, also known as pogies, or bait fish about 6 inches long, move toward the shore.

“Where the bait goes, the whales will follow,” Stokes said. “They’re pretty smart. They’ve figured out that if they move the bait close to shore, (the bait) really gets balled up and they can feed on them easier.”

“Once we start seeing the pogies around, usually within a week or so, we start to see the whales move in as well,” she said.

The center has already received reports about humpback sightings this year. In previous years, minke whales have also been spotted.

“I haven’t heard of any minkes in the area lately, but we have heard of a number of humpbacks near Salisbury and Plum Island,” Stokes said.

She added that the whales put on quite the show, especially with how shallow the water is along the shore.

“People will often think that they’re breaching, but the water is actually not deep enough in that area for them to do a full breach, so it’s actually lunge feeding,” she said.

Lunge feeding is when a whale locates a ball of bait fish, picks up speed, opens its mouth and takes in all of the fish and sea water. Then, the whale closes its mouth and uses its tongue to push the water and the bait forward through its baleen plates, filtering out the water and allowing it to swallow just the bait.

“Some of those humpback whales are in the 40- to 50-foot range as adults and to think that they could be in only about 12 feet of water is pretty amazing,” she said.

Stokes reminds people, especially boaters and kayakers, to keep their distance from whales. It is against federal regulations to approach, touch, feed or follow marine mammals. More information on this can be found at www.fisheries.noaa.gov/insight/viewing-marine-life.

John Macone, policy and education specialist at the Merrimack River Watershed Council, enjoys boating and fishing along the coast, as well as the Merrimack River. Though not an expert on whales, he has noticed an increase in sightings over the last few years, saying the schools of bait fish are attracting the mammals.

As a boater, he said it can be startling when a whale pops up. “It’s like a school bus coming out of the water,” he said.

At Groundswell Surf Cafe and other businesses along the Broadway loop at Salisbury Beach, customers had a front row seat for whale sightings this week.

Though they usually take place early in the morning, between 6 and 7 a.m. or later in the afternoon, excited onlookers observed a whale feeding not far off the shore about noon Tuesday.

“That was really cool to see them midday,” Silvia said, adding that the pogies could be seen frantically swimming around just before the whale lunged.

Tilton, who grew up in Ipswich, loves exploring and photographing the scenery around Plum Island, Crane Beach and Salisbury Beach. She shared photos of the whale on her Facebook page, “Plum Island & Beyond,” writing that she was “thrilled to pieces” about the sighting.

In a phone call, Tilton said it’s best to keep an eye out for whales early in the morning when the water is calm.