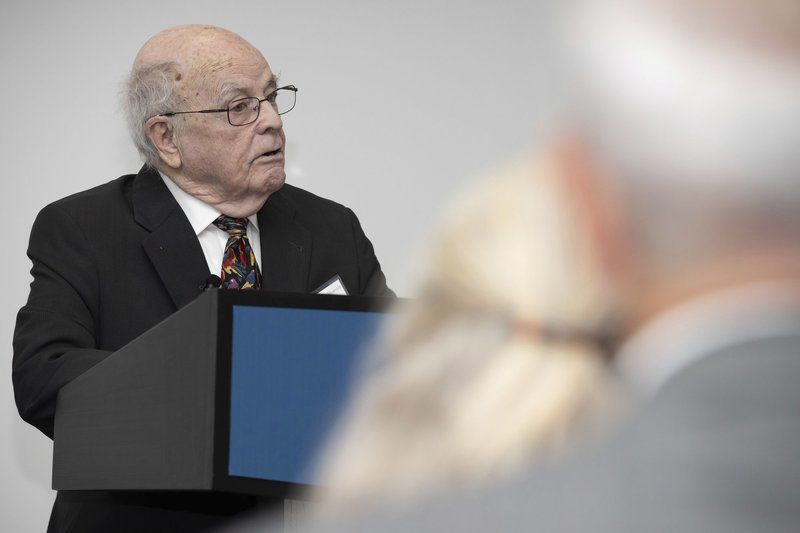 Jared Charney/PhotoMarine veteran and author Larry Kirby, 95, speaks about his experiences during World War II and the soldiers who gave their lives, especially those who fought with him in the Battle of Iwo Jima. 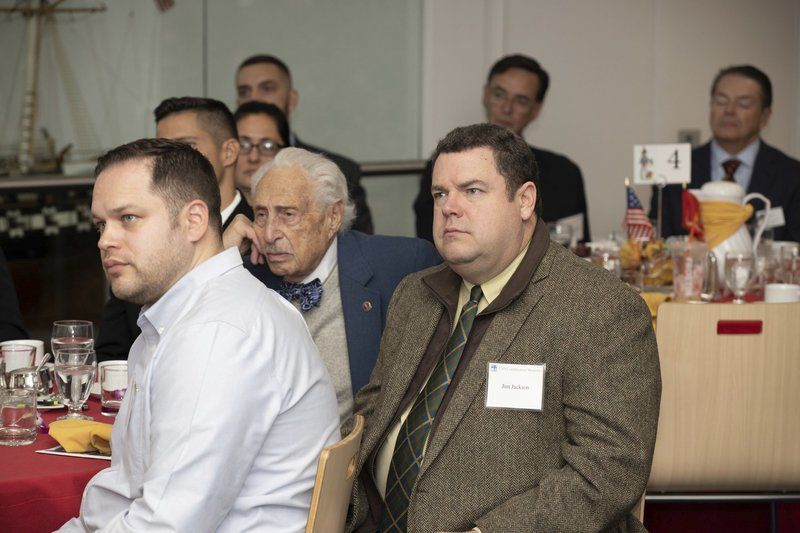 Jared Charney/PhotoGuests listen to Larry Kirby speak during the breakfast. 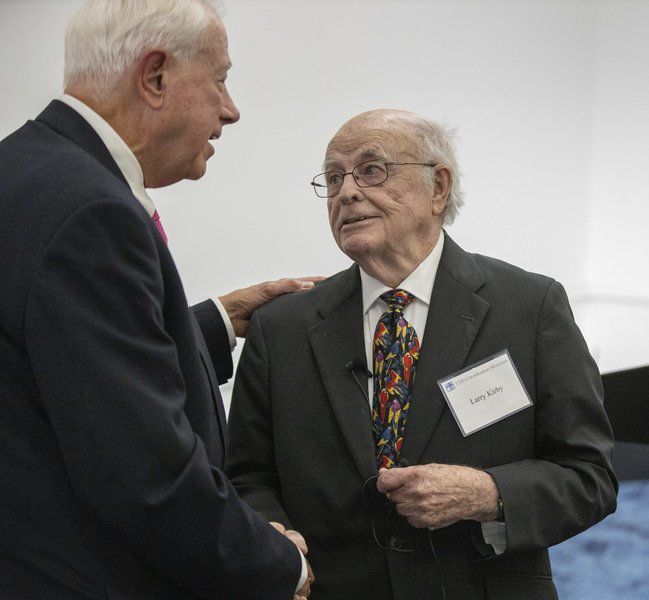 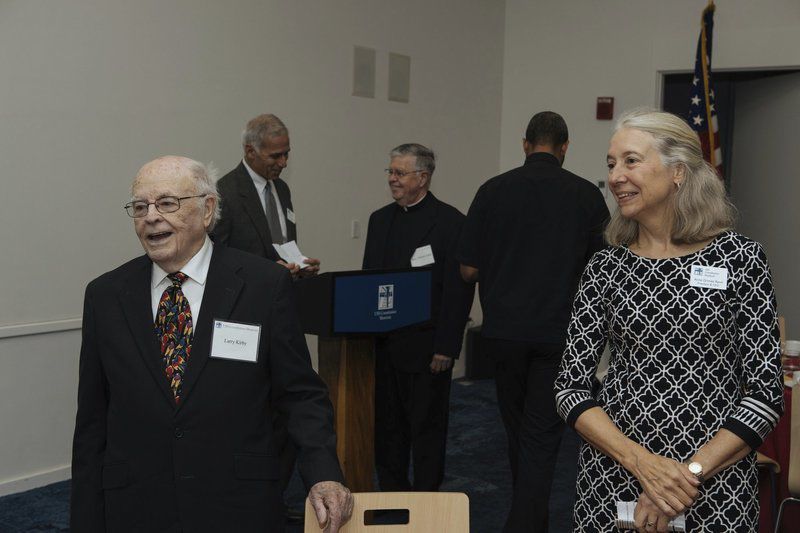 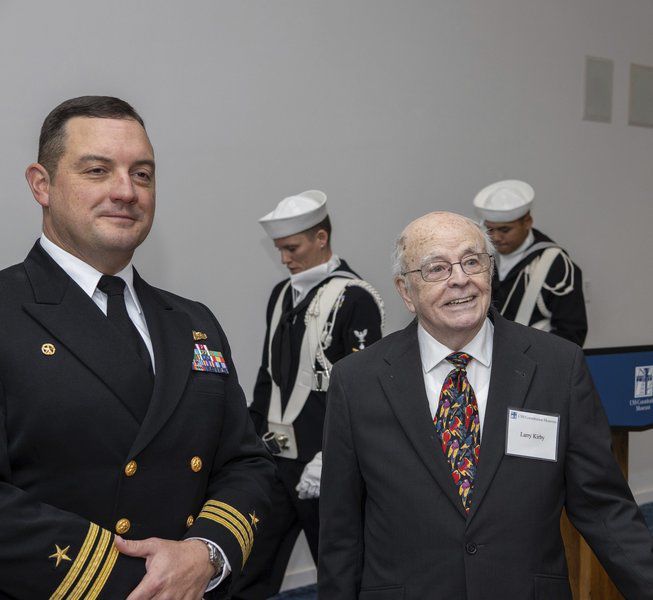 Jared Charney/PhotoMarine veteran and author Larry Kirby, 95, speaks about his experiences during World War II and the soldiers who gave their lives, especially those who fought with him in the Battle of Iwo Jima.

Jared Charney/PhotoGuests listen to Larry Kirby speak during the breakfast.

CHARLESTOWN — When American soldiers stormed the island of Iwo Jima on Feb. 19, 1945, there were 230 Marines in Larry Kirby's company.

Kirby, of Manchester-by-the-Sea, was one of the few survivors.

“I can guarantee you that as long as I am able to breathe I will remember them every single day and I will always be in their debt,” Kirby said of those who died.

On Friday, Kirby, 95, a U.S. Marine Corps veteran and author, spoke of the men he served alongside during War World II at the annual Lt. William S. Bush Memorial Breakfast at the USS Constitution Museum.

“Sometimes during the day, usually in the morning, I may think of four or five or six or eight of the guys and I look at them like swiping photographs on my iPad,” Kirby said. “I see their face, I hear them laugh, I hear their voice, and I think of something that we did together.”

When 18-year-old Kirby enlisted in the Marines in 1942, the average age of the American soldier did not exceed 30.

Kirby served in the Pacific with the 3rd Marine Division and took part in three amphibious landings including Bougainville, the liberation of Guam and the battle of Iwo Jima.

In the military, Kirby was trained as a scout sniper and held the rank of platoon sergeant.

The veteran listed a number of instrumental soldiers who flew planes, commanded entire companies, and fought on the front lines — all under the age of 20.

“I realized that we left the future of Western Civilization and put it in the hands of teenagers and they did a pretty good job, I think,” said Kirby.

An enlisted sailor stationed on board the USS Constitution, Mary Bushatz, 23, said she was moved by Kirby’s speech.

“It was amazing,” said Bushatz, who has been serving as a seaman in the U.S. Navy for almost two years.

“It brought tears to my eyes just how he spoke about the war and his friends especially,” continued Bushatz. “How much they meant to him and how he still thinks of them.”

During the five-week battle of Iwo Jima, the United States lost approximately 7,000 troops — 22 of them were Kirby’s friends.

“They went from being afraid of dying to actually giving their lives for their friends because they loved them,” Kirby said. “It is a love, not like the love that is described in novels and in movies, but a love that is based on respect, honor, understanding, and commonality of purpose.”

During the battle of Iwo Jima, as the violence of war was happening all around, three M4 Sherman tanks rescued Kirby and six of his friends.

Dressed in the uniform of those who served in the Marines during the War of 1812, President of the Historic Marine Education Henry Rodrigues expressed gratitude in hearing Kirby’s story.

“Hearing the stories of those that have gone before me is meaningful and thrilling,” said Rodrigues, a retired U.S. Navy chief petty officer. “It gives extra meaning and recognition to everything that we do.”

At the end of the war, Kirby returned home and went on to graduate from Northeastern University, work as a marketing analyst and as an operating vice president for a computer company, and start a family.

He has always prioritized his personal life over his professional life.

“This attitude has cost me a lot of money and at one time it got me fired,” laughed Kirby.

He explained that at one point he had been called to New York for a meeting, but did not go because of what he remembers to be either a graduation or a little league game.

But Kirby told the audience he doesn’t care that he got fired.

“Wealth, position, recognition have value, but none of them equal to being alive,” he said.

“The thing that exceeds or surpasses being alive is love, because these kids taught me that love is more important than living.”

Staff writer Taylor Ann Bradford can be reached at 978-338-2527 or tbradford@northofboston.com.