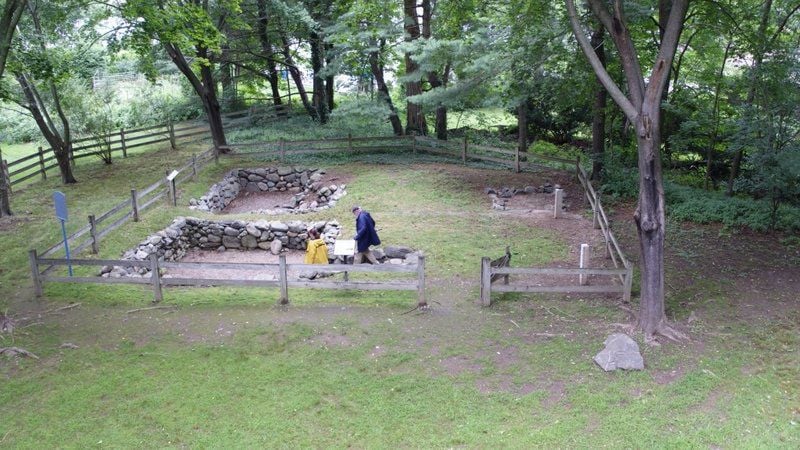 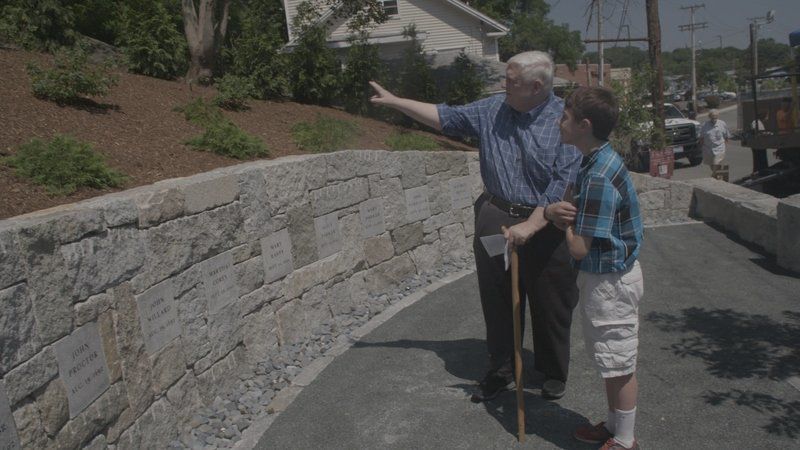 Danvers archivist Dick Trask and his grandson, Zach Peterson, look over the memorial at Proctor's Ledge in Salem, the execution site for victims of the Salem Witch Trials. (Courtesy photo) 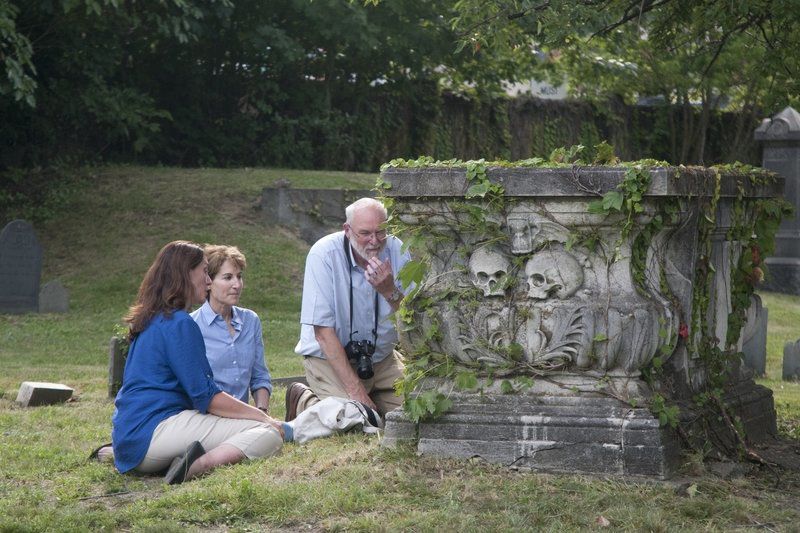 Elizabeth Peterson, Stacey Schiff and Tad Baker visit the tomb of Judge William Stoughton, who was in charge of the Salem Witch Trials. The three witch trials historians are part of a new Smithsonian TV series that premieres Monday night. (Courtesy photo)

Danvers archivist Dick Trask and his grandson, Zach Peterson, look over the memorial at Proctor's Ledge in Salem, the execution site for victims of the Salem Witch Trials. (Courtesy photo)

Elizabeth Peterson, Stacey Schiff and Tad Baker visit the tomb of Judge William Stoughton, who was in charge of the Salem Witch Trials. The three witch trials historians are part of a new Smithsonian TV series that premieres Monday night. (Courtesy photo)

SALEM — The Salem Witch Trials. The 1918 Spanish flu pandemic. The attack on Pearl Harbor. Each of these events is well-documented in history books. But do we know the whole story?

To make sure we do, the Smithsonian Channel debuts a new series on Monday called called “America’s Hidden Stories,” and it begins with a story close to home.

Stacy Schiff, author of “The Witches: Salem, 1692,” is one leading expert featured in the episode.

“When you have all sorts of strain, it erupts in a very physical manifestation,” Schiff said, noting how the widespread anxiety and distress of the time can be closely paralleled to today.

The Pulitzer Prize-winning author explained how the community had just survived an excruciatingly cold winter and had a minister grappling to regain control of his parishioners. The colony was also at odds with the mother country, England. Many of the events took place in Salem Village, which is now Danvers.

Tituba, an enslaved woman from Barbados who was owned by Puritan minister Samuel Parris, first confessed to practicing witchcraft and being the devil’s agent.

“She was a slave. She had no choice,” said Schiff.

But that set the events of the witch hysteria in motion, eventually leading to more than 200 accusations of witchcraft and 20 executions.

“The lightning speed at which fear traveled is extraordinary,” Schiff said. Once the afflicted girls began convulsing and shrieking involuntarily, there was no stopping them.

A combination of factors contributed to the snowballing effect of this nine-month span of terror.

“Everyone had their own agenda,” Schiff said. Such a time gave people an opportunity to settle grudges and rid themselves of people, even family members, they viewed as troublesome.

Richard Trask, the town archivist for Danvers and an expert on the witch trials, was one of several local experts brought in to help with the episode. Others locals involved include Salem State professor Emerson "Tad" Baker, author of "A Storm of Witchcraft: The Salem Trials and the American Experience"; and Elizabeth Peterson, director of the Jonathan Corwin House in Salem, better known as the Witch House.

“It’s a major subject that captures the public’s imagination,” said Trask, whose ancestors include John Proctor and Mary Eastey, both of whom were executed in 1692.

When he was growing up in Danvers, it was impolite to talk of the witch trials, he said — there was a built-in shame. Just over the last few decades, however, interest in the witch hysteria has grown, with major books and television programs being produced annually.

The Smithsonian's production, he noted is made visually interesting, thanks to techniques like fast-cut editing and the use of drones to reexamine Gallows Hill and locate the site of the hangings.

But the story itself continues to fascinate.

For Schiff, what stands out most about the story of the witch trials is how long it took for "the voice of reason to be heard."

As Trask noted, different institutions in life can fail you, but “it boils down to the integrity of the individual.”

Over the course of seven episodes, the first season of “America’s Hidden Stories” touches on storylines ranging from Benedict Arnold to the attack on Pearl Harbor, and even whether the Spanish flu pandemic could return.

As for the witch trials episode, Schiff said, "People watching will see how something so distant and foreign can feel very present.”