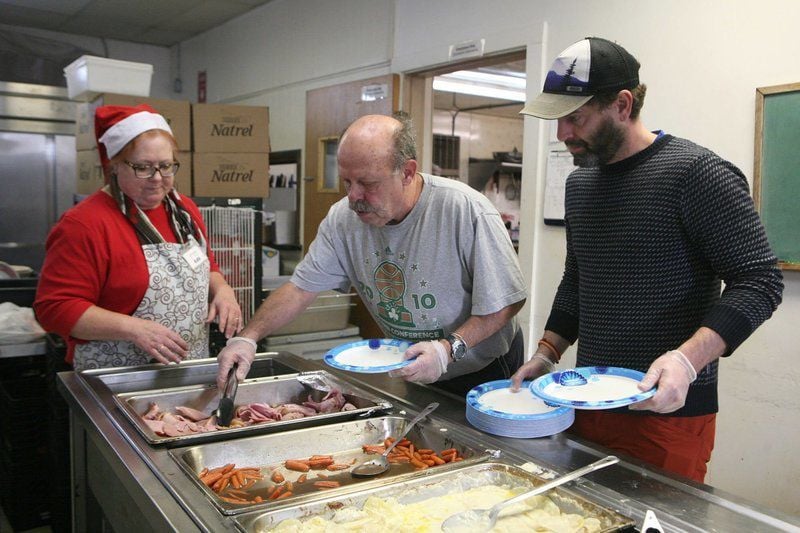 Volunteers Kate Benashski, from left, Sol Eskenzai and Mark Pointner serve up Christmas dinner for those in need at the Haven from Hunger in Peabody. 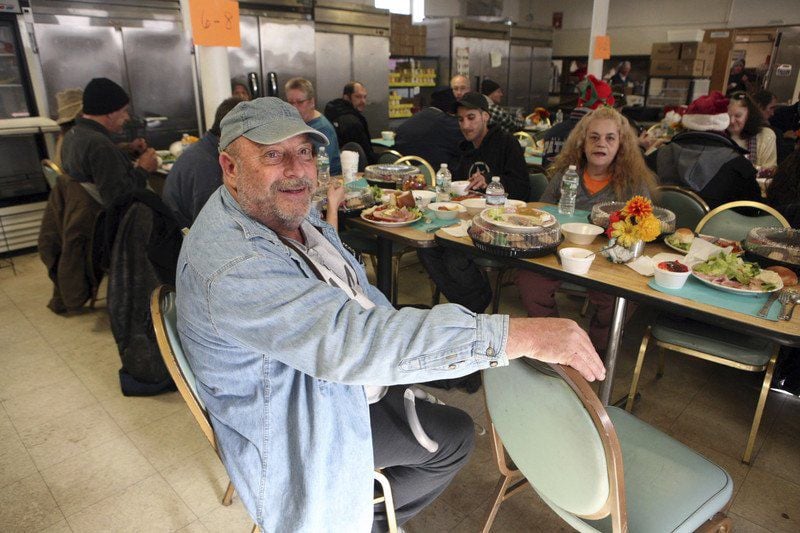 Gino Daloisio enjoys his Christmas dinner at Haven from Hunger on Wallis Street in Peabody on Christmas Day. 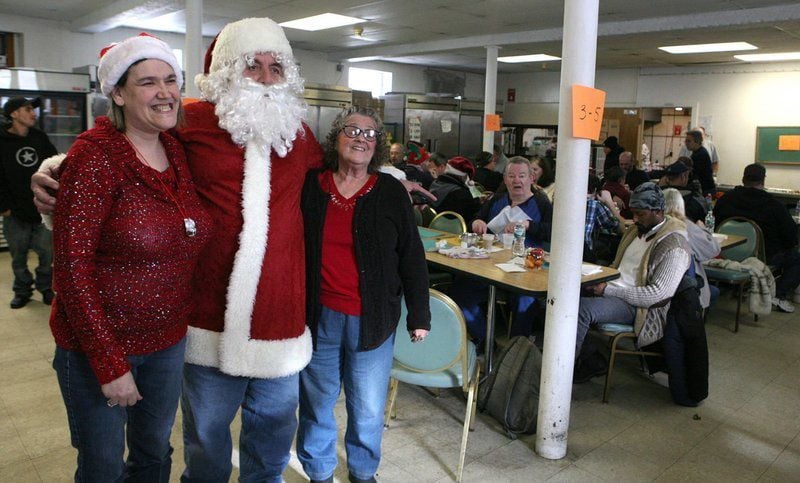 Deborah Karslian, left, and her mother Mable Karslian pose with Santa during the at Christmas dinner at the Haven from Hunger in Peabody.

Volunteers Kate Benashski, from left, Sol Eskenzai and Mark Pointner serve up Christmas dinner for those in need at the Haven from Hunger in Peabody.

Gino Daloisio enjoys his Christmas dinner at Haven from Hunger on Wallis Street in Peabody on Christmas Day.

Deborah Karslian, left, and her mother Mable Karslian pose with Santa during the at Christmas dinner at the Haven from Hunger in Peabody.

PEABODY — The bacon-wrapped scallops were among the first of the appetizers to go.

Then there was the main course: spiral sliced ham, glazed carrots, scalloped potatoes and salad. And for dessert, ice cream sundaes.

And just like any other gathering on Christmas Day, someone was making sure that their guests went home with something, too, in this case a tray of cookies and candy prepared by clients of Northeast Arc in Danvers, a program for developmentally disabled people.

More than 40 North Shore residents of all ages and backgrounds, and a dozen volunteers filled the basement of Haven from Hunger on Monday for the organization's annual holiday dinner. It's the first Christmas Dinner since the group merged with Citizens Inn last summer.

Gino Daloisio, 65, has been coming to the dinners for the past seven years and also eats at Haven from Hunger, on Wallis Street in Peabody, several times a week.

"This place keeps up the quality of my life," said Daloisio, a U.S. Army veteran and college graduate who "hit bottom" a few years back and lost everything, including a home in West Peabody.

"I was destitute," he recalled. 'I didn't know this place was here."

After finding a room to rent downtown, he went three days without eating, he recalled Monday. Then a new acquaintance told him about Haven from Hunger. He wolfed down four sandwiches on his first visit, he said.

Now he tells everyone he can about the place.

And it's not just about the food, but the companionship.

Many of the guests are isolated, cut off from family or fallen out of touch with old friends. The dinners give him and others a chance to socialize, make new friends and catch up with others, he said.

"Some are just alone and they want to be able to share the day with others," said program director Kate Benashski.

Donna Whalen both relies upon and volunteers at Haven from Hunger throughout the year as she struggles to make ends meet on a limited income. On Monday, she was in the kitchen helping prepare the dinner.

"I find this one of the most fulfilling days of the year," said Whalen. There are no family squabbles or complaints. "Everyone's happy, everyone's getting along."

Benashski said she's always impressed with the turnout both among volunteers and guests.

Stephanie Pointner and her son, Mark Pointner, have volunteered regularly at Haven from Hunger. Stephanie's church prepares a meal there once a month, and her son joins her on Christmas.

Tony Monaco of Hamilton, another regular volunteer, donned a Santa suit for the first time on Monday. "It makes people happy," he said.

Mark Ross of Peabody has also volunteered every Christmas since the program began offering holiday dinners.

"Christmas is my thing," said Ross, as he slid appetizers off of a hot tray. His job on Monday was ensuring that each course came out on time and warm.

"I've been blessed that I've been able to do this stuff every year," said Ross.