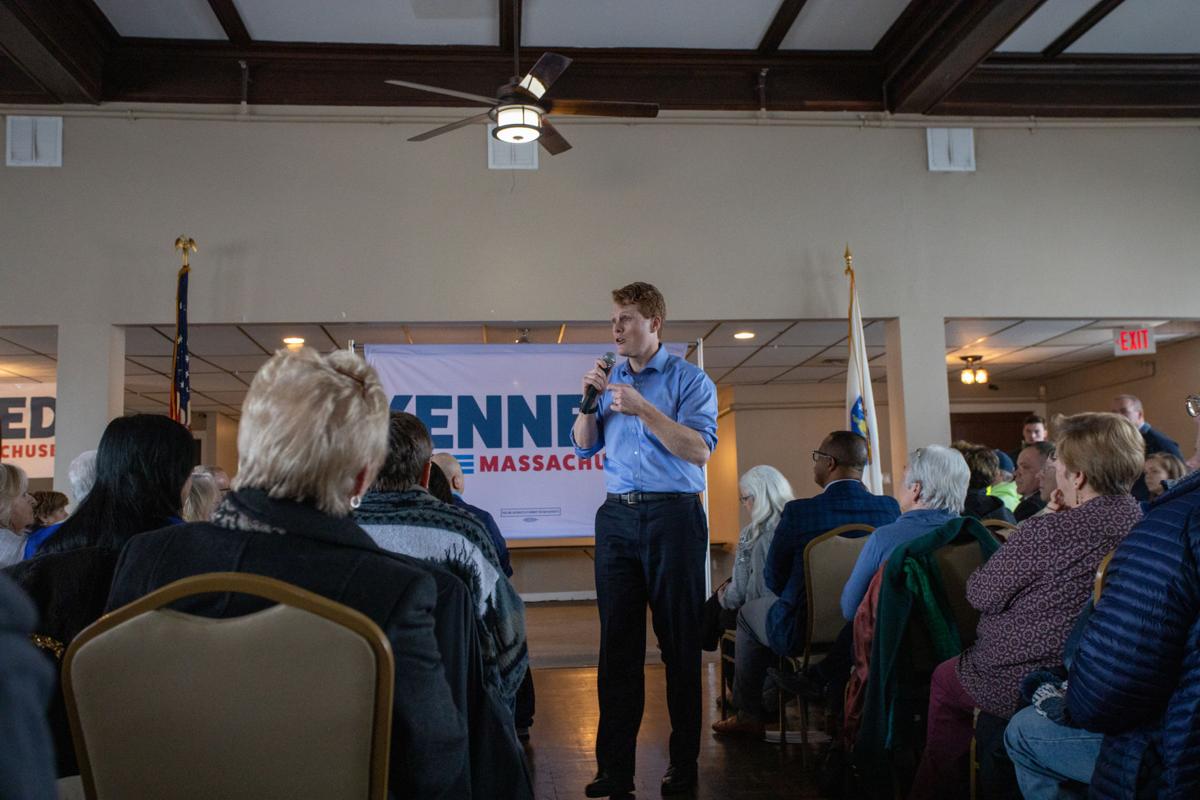 Congressman Joe Kennedy hosts a town hall event at the Ancient Order of Hibernians hall on Lowell Street in Peabody, Saturday, Jan. 18. Kennedy is challenging U.S. Sen. Ed Markey, who is up for re-election this year, in the Democratic Primary. 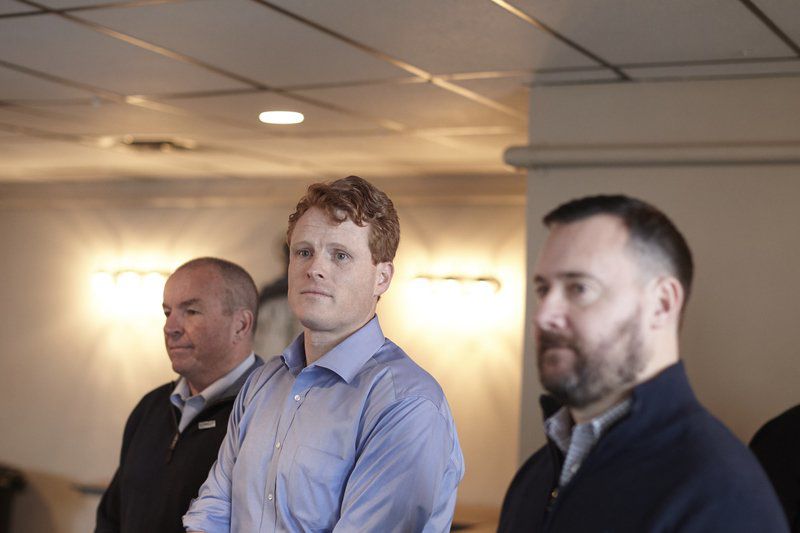 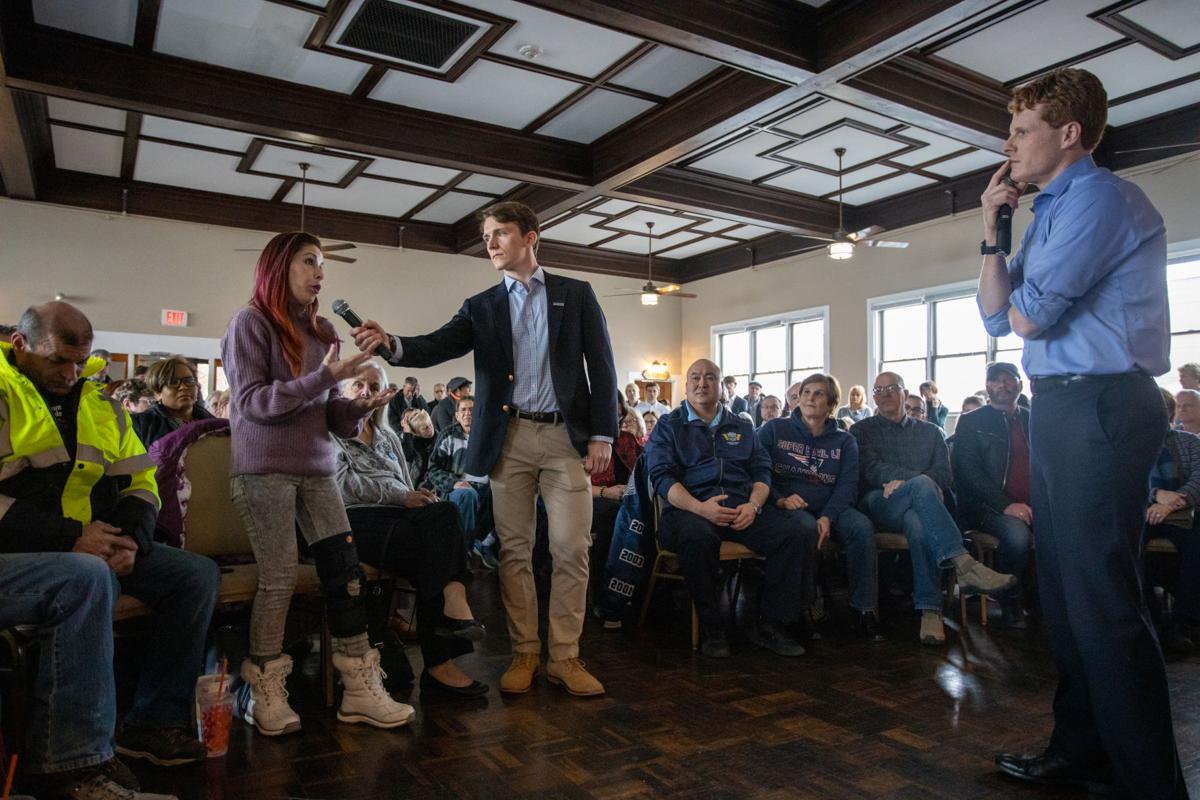 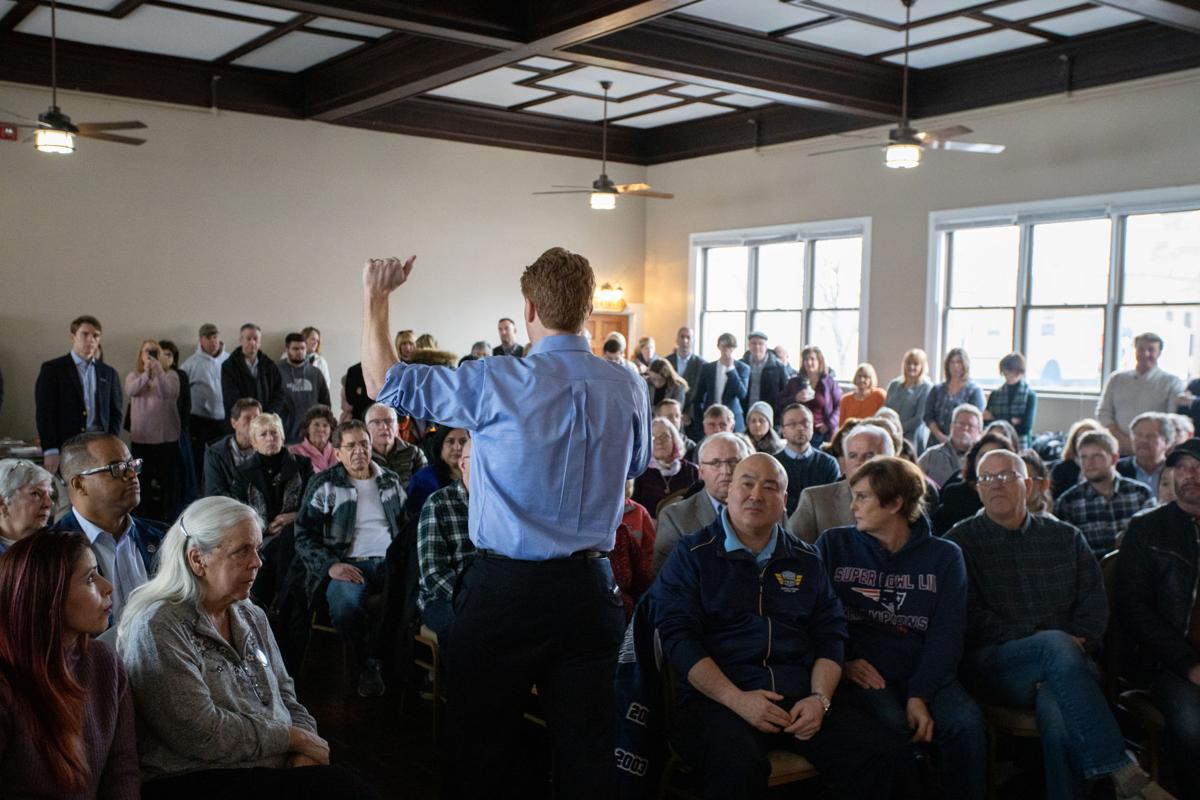 A number of North Shore public officials are among the audience at Congressman Joe Kennedy's campaign town hall event at the AOH in Peabody on Saturday. 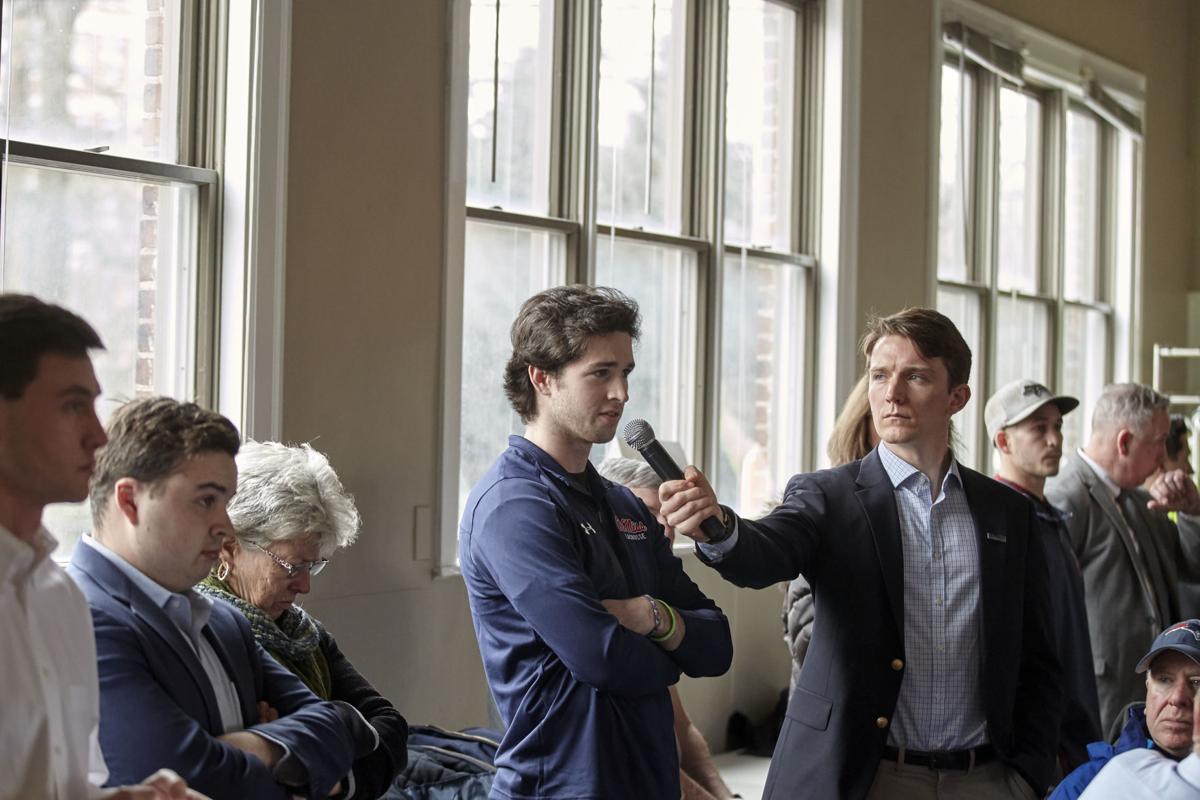 Liam Connolly, 20, of Beverly, asks Congressman Joe Kennedy a question about the opioid crisis during Saturday's town hall event at the AOH in Peabody. 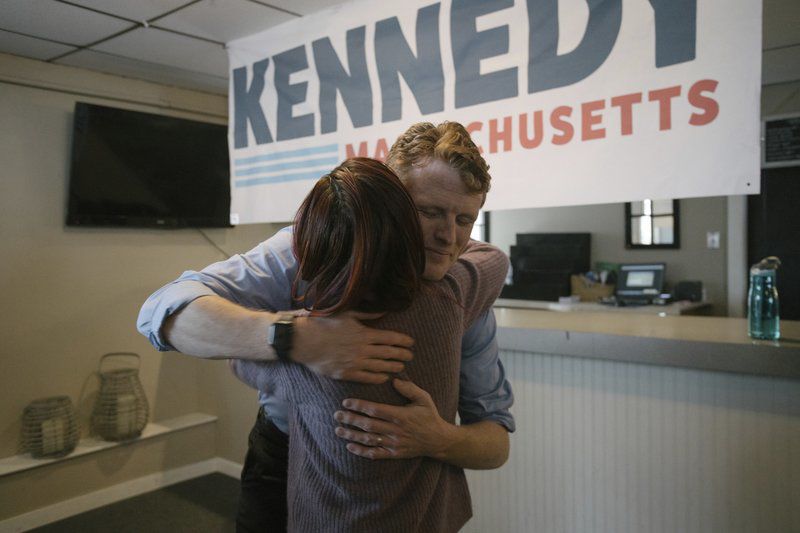 Congressman Joe Kennedy hosts a town hall event at the Ancient Order of Hibernians hall on Lowell Street in Peabody, Saturday, Jan. 18. Kennedy is challenging U.S. Sen. Ed Markey, who is up for re-election this year, in the Democratic Primary.

A number of North Shore public officials are among the audience at Congressman Joe Kennedy's campaign town hall event at the AOH in Peabody on Saturday.

Liam Connolly, 20, of Beverly, asks Congressman Joe Kennedy a question about the opioid crisis during Saturday's town hall event at the AOH in Peabody.

PEABODY — Carole Rein of Beverly was "undecided" before she walked into the packed Ancient Order of Hibernians Hall just off Peabody Square on Saturday morning to hear Congressman Joseph P. Kennedy III make his pitch for U.S. Senate.

However, amid the thumping music and the standing-room-only crowd of about 150 young people, seniors, North Shore officials and union members, something clicked.

"Which way did you go?" Kennedy asked to laughs.

Markey's name did not come up during the one-hour town hall, where Kennedy fielded questions about preexisting conditions, LGBTQ rights, the future of Social Security and the impeachment of President Donald Trump, for which Kennedy voted in favor of in the House.

Peabody was Kennedy's first stop in a series of 14 town halls over the next two weeks, including a Spanish-language town hall to be held in Lawrence at Relief's In, 1 Market St., Lawrence on Feb. 1 at 1:30 p.m.

Rein asked Kennedy if he had been in a situation in which constituents want him to vote one way, but he wants to vote the other.

"Yes," he said. "And, in fact, I imagine that I'm in that circumstance on almost every time I cast a vote, because of the diversity of opinion I have in my district. And that's a beautiful thing."

Kennedy, a former assistant district attorney, has represented the South Shore 4th Congressional District since 2013. It's made up of 34 cities and towns, snaking its way south from affluent communities like Brookline, Needham and Newton. The latter community is where he lives. The district runs all the way to Taunton and Fall River. Kennedy noted the core of his district covers the state senate seat once held by Republican U.S. Senator and Ambassador Scott Brown.

Each election cycle, he said, he holds open office hours in every city or town to hear from constituents.

Kennedy brought with him plenty of signs and banners with his family's famous political name on them. He's the son of former Massachusetts Congressman Joe Kennedy, the grandson of the late U.S. Attorney General and New York Sen. Robert F. Kennedy, and the great-nephew of President John F. Kennedy.

He hinted at this legacy in a question about whether the Democrats should go bold or take it easy to avoid alienating moderates.

"Where I am? I don't think you have to chose," Kennedy said. He noted, though not by name, the motto of Democratic presidential contender Elizabeth Warren, Massachusetts senior senator, which is: "Dream big and fight hard."

"I don't think there is a problem with looking at the shortcomings in our society and coming up with big bold solutions ... Let's just put it in context. As big and bold as any of the solutions that are out there, I am reminded of a young president that looked up in the sky one night and said: Hey, you know what, let's go there in 10 years ... with less technology than is in a darn phone," he said to applause. "You can't tell me that going to the moon with less technology than is in one of these is harder than any other policy proposal that any Democrat has put out there today."

Kennedy had plenty of local support in the room, including Peabody Mayor Ted Bettencourt, who introduced Kennedy, and Salem Mayor Kim Driscoll. Both have endorsed his candidacy.

"As soon as I got to meet Joe and learn about him, have some real conversations about his thoughts and plans for the future, I was hooked," Bettencourt said.

After a question from a woman who spoke about her medical challenges, Kennedy said approximately 130 million Americans have preexisting conditions amid uncertainly about the future of health care.

"We can ensure that in fact we don't make it a luxury for you to get access to the care you need when you need it," Kennedy said. He acknowledged the robust debate among Democrats about whether to preserve and expand  the Affordable Care Act or create a Medicare for all system. At these ideas' core is the value to provide health care when it's needed.

Kennedy said the Republican Party in  Washington, D.C., at the moment does not believe the federal government should play a central role in health care.

"This is very much a health-care election," Kennedy added.

Liam Connolly, 20, of Beverly, asked Kennedy about the rise of the opioid epidemic and whether Kennedy would advocate for money for safe injection facilities.

Kennedy said he ran for office because he saw the consequences of the opioid epidemic in his work as an assistant district attorney. He often would deal with young people who would come before him facing a string of felonies after breaking into cars and homes to feed their addiction. He also spoke about the importance of dealing with those with mental behavioral issues who wind up behind bars.

"You have to fundamentally rethink the way in which our country treats issues around mental health," he said.

Kennedy has been working on a comprehensive overhaul to the mental health behavioral health care system, but the bill is not ready yet, he said.

"Because we are at a point now where the underlying structures of our economy have made it next to impossible for many families to live within Greater Boston, the communities they have actually helped build and construct, that's forcing people out with dramatic consequences for the context of those communities, and then putting additional stress on, obviously, transportation networks."

He said Congress needs to fund a transportation bill to bring about projects such as the long promised South Coast Rail.