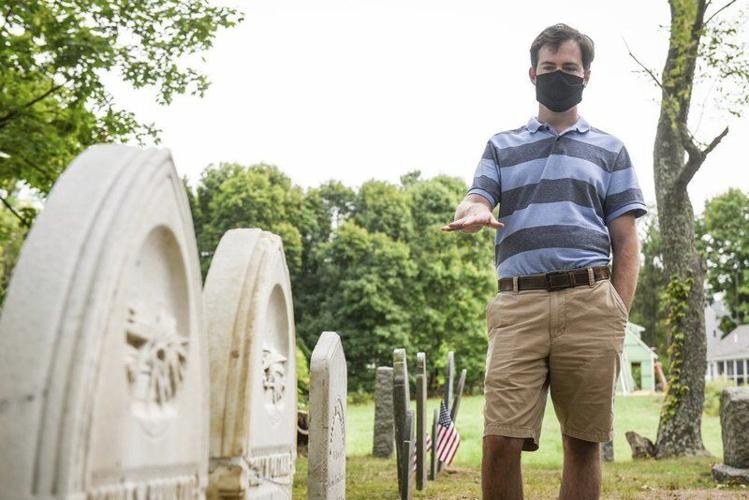 JAIME CAMPOS/Staff photoDan Gagnon talks about some of the processes that go into restoring gravestones at the Rebecca Nurse Homestead in Danvers. Several gravestones are being repaired and restored after some were found in the basement of a barn on the property. 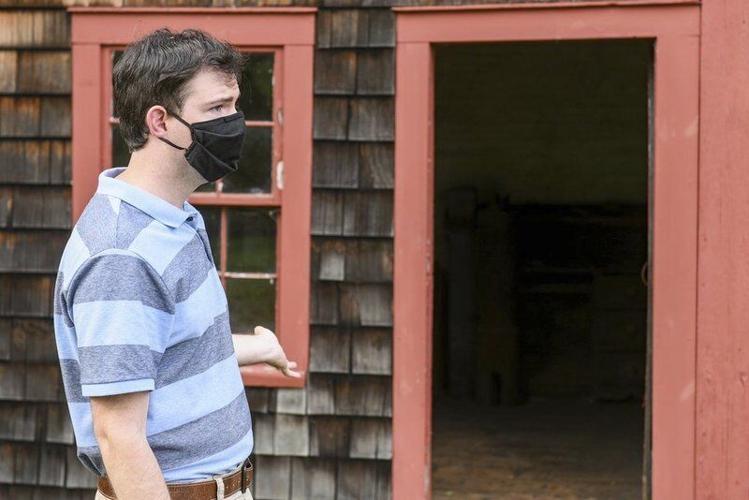 JAIME CAMPOS/Staff photoDan Gagnon talks about the shed where some of the gravestones were stored over the years. 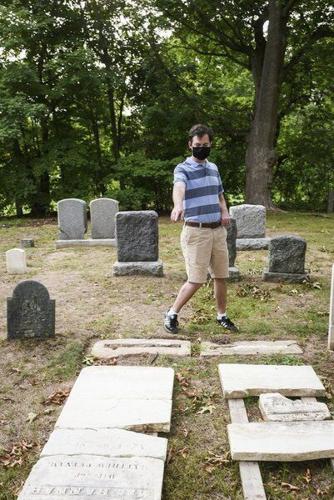 JAIME CAMPOS/Staff photoDan Gagnon talks about some of the processes that go into restoring gravestones at the Rebecca Nurse Homestead in Danvers. Many of the stones that had broken over the years were recently discovered in storage. 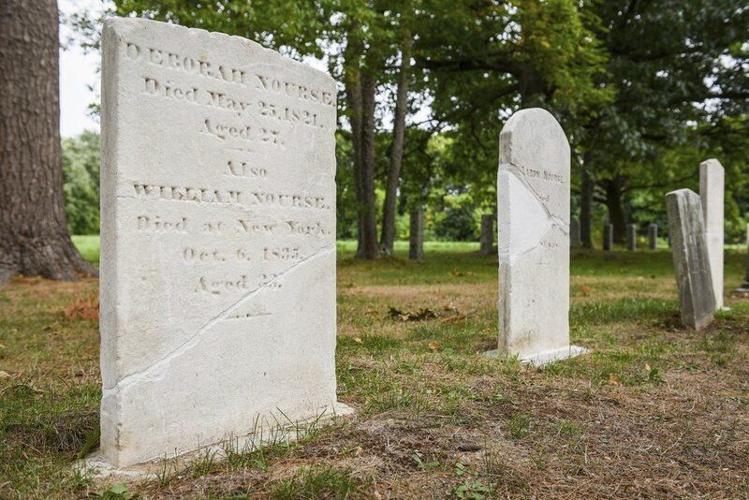 JAIME CAMPOS/Staff photoDan Gagnon talks about some of the processes that go into restoring gravestones at the Rebecca Nurse Homestead in Danvers. Several gravestones are being repaired and restored after some were found in the basement of a barn on the property.

JAIME CAMPOS/Staff photoDan Gagnon talks about the shed where some of the gravestones were stored over the years.

JAIME CAMPOS/Staff photoDan Gagnon talks about some of the processes that go into restoring gravestones at the Rebecca Nurse Homestead in Danvers. Many of the stones that had broken over the years were recently discovered in storage.

DANVERS — No one knows how long the gravestones were lost.

Some of the centuries-old stones sat in the dark, unfinished basement, piled on top of each other and covered by bricks, untouched for decades. Others were stacked in a mid-18th-century shed which was previously used as a shoemaker’s workshop.

“They were taken out [of the cemetery] at some point a long time ago, prior to the early 1960s,” said Dan Gagnon, a volunteer and board member at the Rebecca Nurse Homestead, about the multiple historical gravestones that were discovered on the property over the course of the past decade. “Just because they must have, we presume, fallen over and gotten in the way. It wasn't this museum that owned the site at the time.”

But the gravestones, many of which belong to Revolutionary War veterans and relatives of Rebecca Nurse, one of the 19 people accused of witchcraft and hanged during the Salem Witch Trials of 1692, were recently restored, repaired and placed back in their original spots at the Rebecca Nurse Homestead cemetery.

The stones were brought to the attention of the leadership at the Rebecca Nurse Homestead, Gagnon said, launching the effort to find where the stones had originally been placed.

Gagnon was one of a few volunteers who he said spent the next couple months scouring through 19th-century photographs of the cemetery and doing genealogical research to determine where the stones belonged.

Once the volunteers had a good idea of where each gravestone belonged, they laid them in their respective spots and called a few experts to take over.

Rachel Meyer and Josh Gerloff, founders of Epoch Preservation, arrived in early July to restore and repair gravestones in the cemetery and place the missing stones back in their original spots.

“Our job is not to make it look new, but to keep it upright for future generations,” Meyer said about her job as a stone conservator. “We do responsible repairs that won't harm the stones, and we don’t make permanent repairs that can’t be undone. We want to keep cultural heritage going so the next generation can keep it going for the generation after them.”

Meyer said she had heard about the old gravestones found in storage and couldn’t wait to see them.

Over the next few weeks, she and Gerloff spent most of their days working the cemetery, nestled in a grove of pine trees and surrounded by chirping birds.

“It is magic back there,” Meyer said. “It’s separated from the house and it's a little safe haven, especially during a pandemic. During the summer, the alfalfa field grows high. It’s secluded and beautiful.”

Meyer said beginning work at the Rebecca Nurse Homestead was a bit like “opening a can of worms.”

“We started with the list they gave us,” Meyer said. “But we would be straightening out a stone, and we would find marble. It turned out there were four foot stones shoved beneath the stone. It was probably four times the amount of work we originally thought. It was full of surprises.”

Gagnon said many of the footstones that were found were propping other stones up, and some were in several pieces.

Meyer said while she and Gerloff work, they like to post photos and videos on their Epoch Preservation Facebook page. One of the most special parts of The Rebecca Nurse Homestead cemetery project was the interactions they had with Nurse’s descendants.

“It meant a lot to them, and it means a lot to me to be able to connect to people,” she said. “We really do feel called to do what we do. All these descendants were really excited that we were repairing their loved one’s grave.”

Meyer said knowing that someone cares about the stones she works on is one of many reasons she loves her job.

“I'm making connections in the present to descendants," she said. "I’m encapsulating and preserving someone's story in this world, and that feels good. It's multi-faceted. It feels wonderful to be the steward of something that otherwise would have fallen to ruin.”

Alan Weeks, a direct descendant of Rebecca Nurse, wasn't aware of the cemetery restoration project while Meyer and Gerloff worked on his ancestor's property, but he said he is excited about the project.

"I am quite proud that I am descended from Rebecca Nurse and many other people that were important to the history of this town," he said.  "I think it's important for anybody that has someone pass away to have a gravestone they can visit, and I think it's exciting that they were able to find these stones. I hope I get to see it."

Gagnon said that a proper burial has always been very important to the people of New England, going back hundreds of years.

“The Nurse family lived here until after the American Revolution, but even after that they and the Putnams could bury their family members here. Just the fact that the families were working together to make this a respectful place for both families shows that they took it really seriously, and it was for hundreds of years.”

Gagnon said he believes the preservation of the gravestones is a form of preserving the memory of people that history may have otherwise forgotten.

“It makes sure they are remembered,” he said. “For some of these people, there might not have been much written about them on paper, and this may be the only place their name is written.”