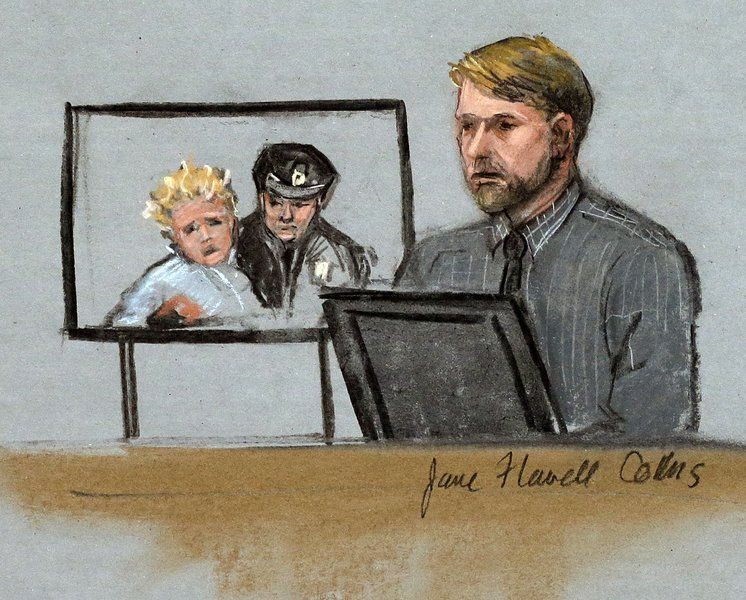 In this courtroom sketch, Boston Marathon bombing survivor Steve Woolfenden is depicted on the witness stand beside a photo of his injured son, Leo, being carried to safety. 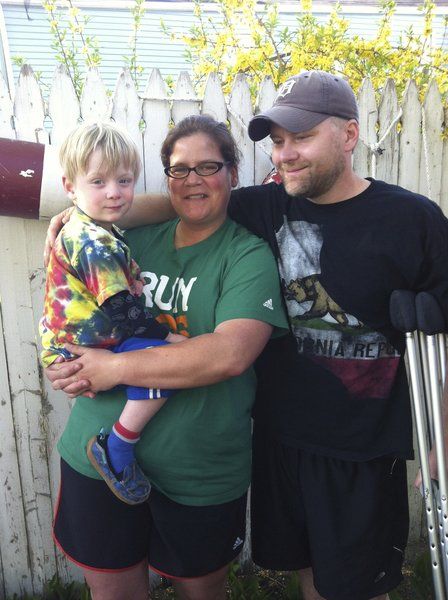 The Woolfenden family – from left, Leo, Amber and Steve – are shown in this photo taken in 2013, about a month after the Boston Marathon bombings. Leo and Steve were both injured.

In this courtroom sketch, Boston Marathon bombing survivor Steve Woolfenden is depicted on the witness stand beside a photo of his injured son, Leo, being carried to safety.

The Woolfenden family – from left, Leo, Amber and Steve – are shown in this photo taken in 2013, about a month after the Boston Marathon bombings. Leo and Steve were both injured.

SALEM — For the first time in two years, former Salem resident Steve Woolfenden spoke publicly about the bombing that claimed half his leg and seriously injured his young son, when he took the stand Thursday in the trial of convicted Boston Marathon bomber Dzhokhar Tsarnaev.

The prosecution rested its case in federal court during the penalty phase of Tsarnaev’s trial after playing a video showing the mother of 8-year-old Martin Richard crouched over him and resting her head on his chest as he lay dying.

“I heard ‘please’ and ‘Martin’ being uttered by Denise Richard,” said Woolfenden, who was lying on the pavement next to Martin and his mother after the second bomb exploded. “Just pleading with her son.”

The boy bled to death on the sidewalk.

Woolfenden’s left leg had been sheared off below the knee. He described trying frantically to get his 3-year-old son, Leo, out of his stroller.

Woolfenden, then 38, and his son were at the finish line on Boylston Street to watch his wife, Amber, 41, a member of Salem’s Wicked Running Club, complete her first marathon when the bombs exploded. He and his son were taken to separate hospitals.

In the days afterward, the running club rallied in support of the family, gathering donations and organizing a community run at New England Running Company in Beverly.

As he began his recovery, Woolfenden started cycling again, first with a hand cycle and then a recumbent bike. He got on his mountain bike for the first time in July 2013, he told a Salem News reporter last summer. Woolfenden spoke briefly about his recovery at a support group meeting for amputees in Wenham, where his family now lives.

Woolfenden told a reporter that “keeping his head straight” was one of his biggest accomplishments, and the group empowered him do that.

“I’m still here. I can do what I want to do, when I want to do it. That’s that,” he said. “What the group is doing for amputees in the community is really important.”

The family could not be reached for comment yesterday.

Tsarnaev was convicted this month of all 30 charges against him. Three people were killed and more than 260 others were wounded when twin bombs exploded near the finish line of the marathon on April 15, 2013. A fourth person, Sean Collier, an MIT security guard and Salem State College graduate, was shot and killed three days later as Tsarnaev and his brother were trying to flee.

A jury must decide whether to sentence Tsarnaev to death or to life in prison.

While prosecutors rested their case Thursday, they will get a chance for rebuttal after the defense presents its case, which is expected to begin Monday.

Also testifying Thursday was Heather Abbott, whose left leg was amputated after the bombing. She described her own painful loss, then identified photos of 16 others who lost limbs as prosecutors tried to drive home the brutality of the attack to jurors who will decide the bomber’s fate.

Abbott, of Newport, Rhode Island, said she was catapulted through the entrance of a restaurant when the second bomb exploded. She said her foot felt like it was on fire, so she began crawling to follow a crowd of people trying to get away from the bomb.

Later, in the hospital, a doctor recommended amputating her left leg below the knee. Her heel had been entirely blown off, and her foot was severely damaged.

“It was probably the hardest decision I’ve ever had to make,” she said.

Prosecutor Nadine Pellegrini asked Abbott to identify photographs of other amputees she has come to know since the bombing. The photos showed the amputees wearing prosthetic limbs, in wheelchairs and on crutches.

Another amputee, Marc Fucarile, testified Thursday from a wheelchair.

Fucarile, whose right leg was blown off in the bombing, glared at Tsarnaev as he sat about 10 feet away at a table with his lawyers. Tsarnaev did not look at him and stared straight ahead impassively.

Fucarile said he has had more than 60 surgeries. Two years after the bombing, it is still unclear whether his left leg can be saved.