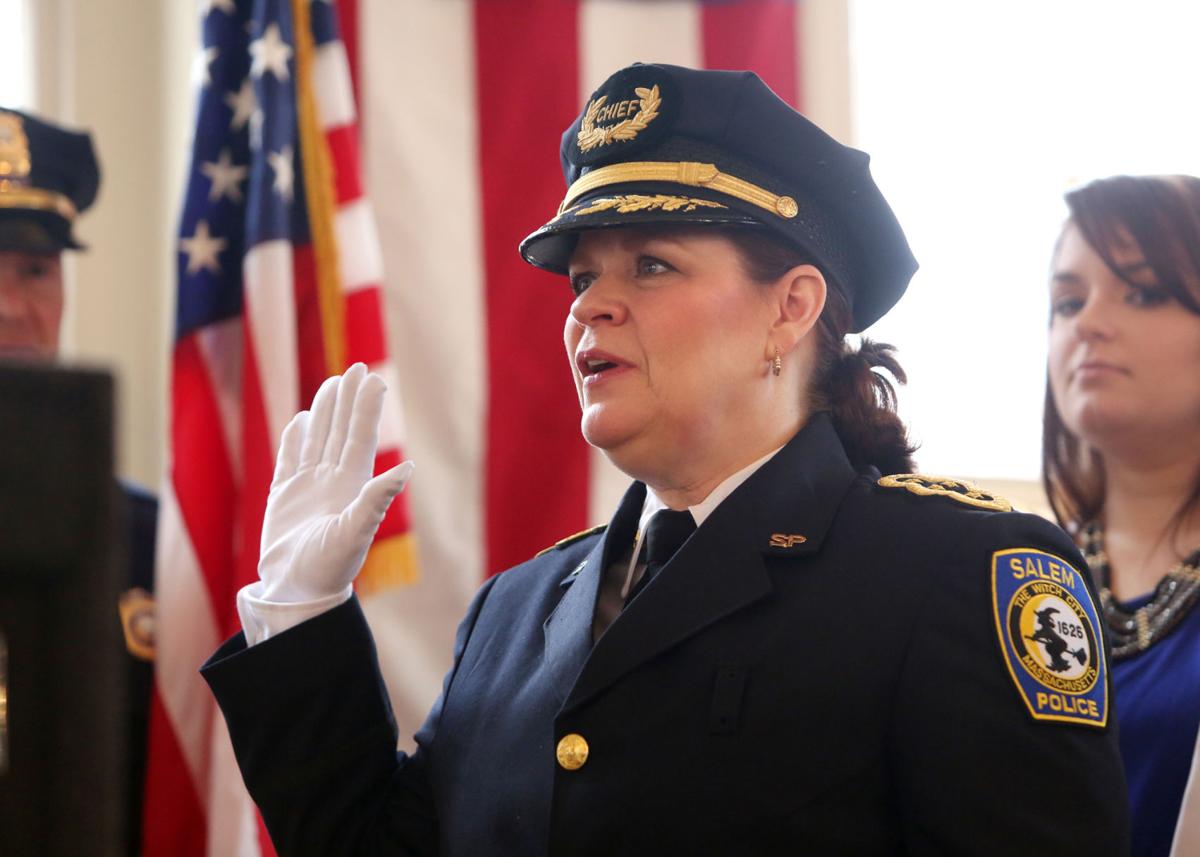 KEN YUSZKUS/Staff photo. Salem Police Chief Mary Butler is sworn in during her swearing in ceremony at Old Town Hall. 04/09/15 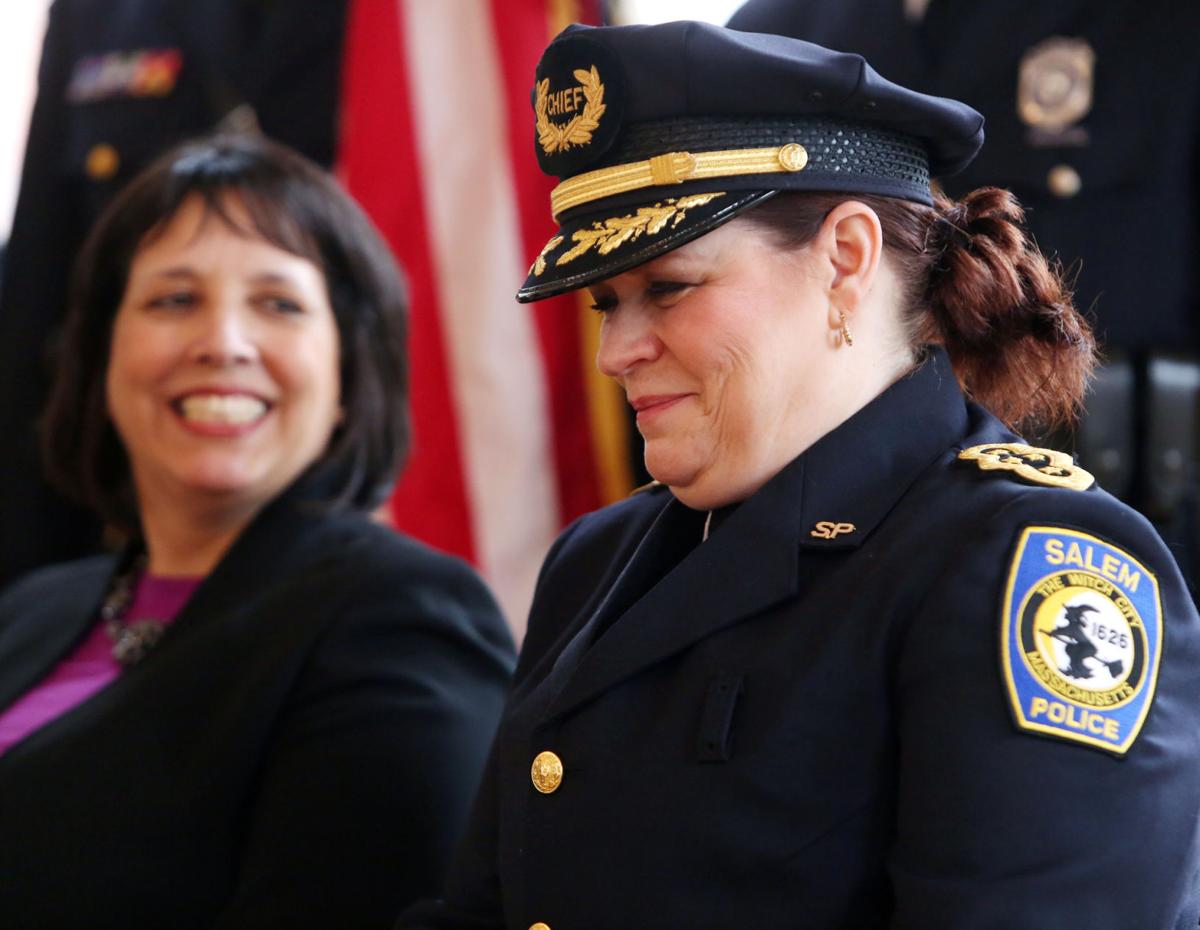 KEN YUSZKUS/Staff photo. Salem Police Chief Mary Butler is sworn in during her swearing in ceremony at Old Town Hall. 04/09/15

SALEM — As a 6-year-old girl, Mary Butler couldn’t go to the park on the next street over because there were people on that street with guns and knives. That was in Lynn, but it’s a vivid memory she took with her when her family moved to Salem that year.

It’s one of the experiences that led her into a career as a police officer, she said Thursday to an overflow crowd at Old Town Hall.

She’s not sure how, she explained, but she ended up becoming the “protector and enforcer” for her five siblings; she never stood by and let them be bullied — by anyone. She stood up for classmates at school as well. As an 11-year-old, her jaw was fractured. In another incident, she intervened when a classmate was being bullied. When she got up again, after being shoved to the ground for the fifth time, the bully finally walked away.

”At 12, I knew I wanted to be a police officer, even though I had a grandmother who told me that girls can’t be that,” she said. “Of course I insisted that they could.”

Forty-three years later, she was being sworn in as Salem’s first woman police chief — to thunderous applause from Salem police officers, who filed in en masse in dress uniforms to the skirl of bagpipes and drums, and from city officials, community leaders, family and friends.

Her husband, Patrolman Brian Butler, pinned the chief’s badge on her uniform as their children looked on.

Butler credited her mentor and predecessor, retired Chief Bob St. Pierre, with paving the way for her to join the police force in Salem. She had taken the police exam in 1981, she said, after graduating from Salem State, but ran into “resistance” from the department. After St. Pierre became chief in 1985, and transformed a department that had been riddled with corruption, she took the exam again, and this time she got the job.

Since then, Butler has amassed a long list of credentials. She’s overseen the patrol and special operations divisions, the community impact unit, served as a public information officer, detective and an administrative aide to St. Pierre.

She was named acting chief in March when Mayor Kim Driscoll chose her, after a rigorous assessment process, from among three finalists for the job.

St. Pierre addressed the crowd, too, praising Butler as “the epitome of a team player.

“She’s an extremely hard worker, she always goes that extra mile to accomplish a task, and she never looks for credit but deflects it,” he said.

He said he’d told Driscoll that Butler would hit the ground running in her new job, and described a case in point, when he called Butler’s cellphone the other night.

“It only rang once, which is unusual, and a male voice answers, “Hello.” I was taken aback and said hesitantly, ‘Brian? Isn’t this Mary’s cellphone?’

“He said, ‘Oh, yeah. Since making chief she now has me answering her cellphone at home,’” St. Pierre recounted to loud applause and laughter. “We always knew who was boss, but now there’s no question about it.”

St. Pierre also recalled how Butler became a detective, under then-Sgt. Dick Urbanowicz — an “old fashioned, hard-nosed street cop” with a sharp tongue and no patience for incompetence. Butler had been on the force only a couple of years when Urbanowicz approached him saying he needed a new detective and it was about time to add a woman to the ranks. He wanted Butler.

“Mary is going to be a transformational leader, there is no doubt about that,” he said. “And while change isn’t easy — especially for police officers — it isn’t always bad, either.”

Driscoll also described Butler as someone who could lead the police department forward “in a positive and constructive fashion. In a manner that isn’t afraid to acknowledge that while there is often value in our traditions, sometimes change and reform is necessary and for the best.”

For her part, Butler said she will be seeking more community involvement and interaction. In addition to requiring all patrol officers to attend at least two neighborhood meetings a year, she noted, she wants to encourage community participation in the citizens police academy and an academy program for at-risk youth.

She is also seeking public feedback.

“If we are not getting it right,” she said, “then we need to know that so we can work together and get it right.”

Peabody - We regret to announc...

Peabody - We regret to announce the passing of Kathy T. Ho, 57, of Peabody, on Sunday, January 10, 2021. Kathy was predeceased by her parents, John and Miriam Tran of Malden. She is survived by her husband, Barry Ho of Peabody, her two sons, Derek Ho and his wife Brenda Lau of Malden, and Br…