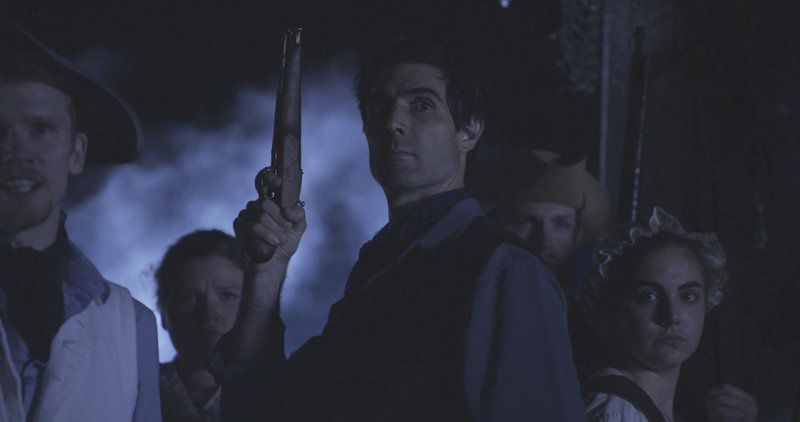 Courtesy photoLouis Cancelmi as Giles in a scene from "Mass Hysteria." 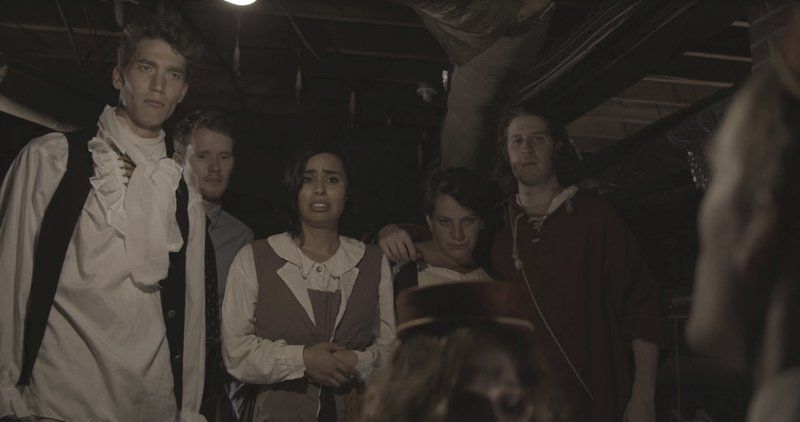 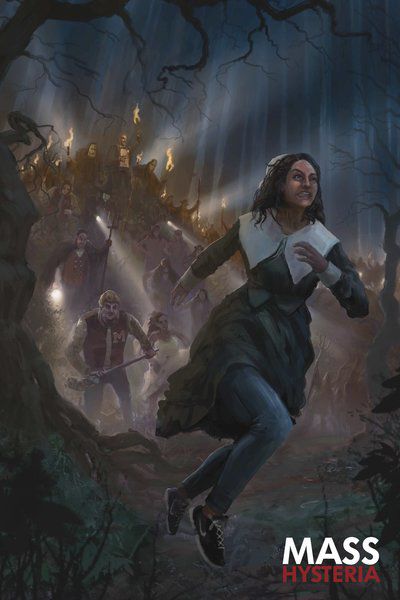 Courtesy image"Mass Hysteria" premieres Thursday in a sold-out showing at the Somerville Theater as part of International Film Festival Boston.

Courtesy photoLouis Cancelmi as Giles in a scene from "Mass Hysteria."

Courtesy image"Mass Hysteria" premieres Thursday in a sold-out showing at the Somerville Theater as part of International Film Festival Boston.

SALEM — One year ago, the thought of creating a film about a Salem Witch Trial re-enactment gone awry for local filmmakers was just that — an idea.

“It all started with Jeff (Ryan, co-director) and I having this idea to use something that we knew about a lot, which was the Salem Witch Trial re-enactors,” said Arielle Cimino of the production company First-Name Films.

“We needed to figure out what was a very unique and specific story to tell and we wanted to do something that was visually compelling,” Cimino said. “We thought it would be really compelling to put our historical re-enactors in a place where they were being hunted for witchcraft in modern day Salem.”

After a year of research, writing, collaboration and 25 nights of filming, their idea, "Mass Hysteria," is about to hit the big screen.

Shot in Salem, First-Name Films' "Mass Hysteria" has been selected by Independent Film Festival Boston for its world premiere at the Somerville Theater Thursday. The sold-out premiere led to an encore showing on Monday, April 28 at the Brattle Theater in Cambridge.

Cimino co-directs and produces the film with Jeff Ryan.

“We’re thrilled to premiere our second feature film at the Independent Film Festival of Boston this year,” said Ryan, who also plays Turner in the "Mass Hysteria." “Our first film, 'YouthMin — A Mockumentary' sold out two screenings and stole the audience award at the festival two years ago and we’re excited to bring even more energy to this year’s festival.”

With a run time of 66 minutes, "Mass Hysteria," described as a horror comedy, puts a modern twist on 17th-century events.

The film tells the story of a group of Salem Witch Trial re-enactors who are accused of witchcraft after a tourist dies on Halloween night. As the story follows the re-enactors on the run from raging tourists, the film plays on the varied perceptions of Salem’s history.

“People go to Salem looking for goblins and witches,” said producer and actor Matt Perusse. “That is not at all reflective of what happened in 1692. The comedy is found in the modern-day interpretation of what tourists are looking for when they go to be a part of Salem.”

Having a background in improv, Cimino, Ryan and lead actress Geena Santiago found the pairing of humor and horror to be an ideal fit for their film.

“They go really well together,” said Santiago. “I am thrilled to have done a horror movie and I am so happy it also involved comedy.”

“The stakes for the movie are just so comical in general as these tourists who want to see witchcraft see it and hysteria breaks out again,” said Ryan.

The entire film was shot in Salem. Cimino said it was a group effort, from everyone on the cast and crew to city residents.

“This movie has further cemented the fact that collaboration is one of the highest forms of art and really no one person can be credited in making this movie a success,” said Cimino.

Shooting in over 30 locations around the city and the North Shore for the month of August, the film includes iconic landmarks such as Pioneer Village, The Witch Memorial, Essex Street, Old Town Hall, Derby Square, and the former site of Bridget Bishop’s apple orchard.

With most of the plot taking place at night, the cast and crew had to adapt to working in the dark in order to capture each scene.

“It was essentially like filming as vampires,” said Santiago.

The crew would begin setting up their equipment at 6 p.m., and filming would carry on until sunrise the following morning. Cimino said the final crew would leave as late as 7 a.m.

“I would hit morning traffic going to sleep,” Cimino laughed. “It was really quite an experience.”

Both premieres of "Mass Hysteria" will be an immersive experience for audience members as actors and actresses from History Alive, Inc.’s "Cry Innocent: The People vs. Bridget Bishop" will be performing outside the theaters prior to the film.

Ryan sees this world premiere of "Mass Hysteria" as “stop No. 1” for their film — it is scheduled to play at this year’s Salem Horror Festival and they have hopes of releasing the film in Salem for the month of October.

“I saw an early cut of the film and was really impressed,” said Salem Horror Festival director Kevin Lynch. “They managed to explore the lessons of 1692 and honor the modern-day community of Salem in a way that is both deeply funny and uncomfortably relevant. Horror comedies are a fine balance but the script and performances here pull it off magnificently.”