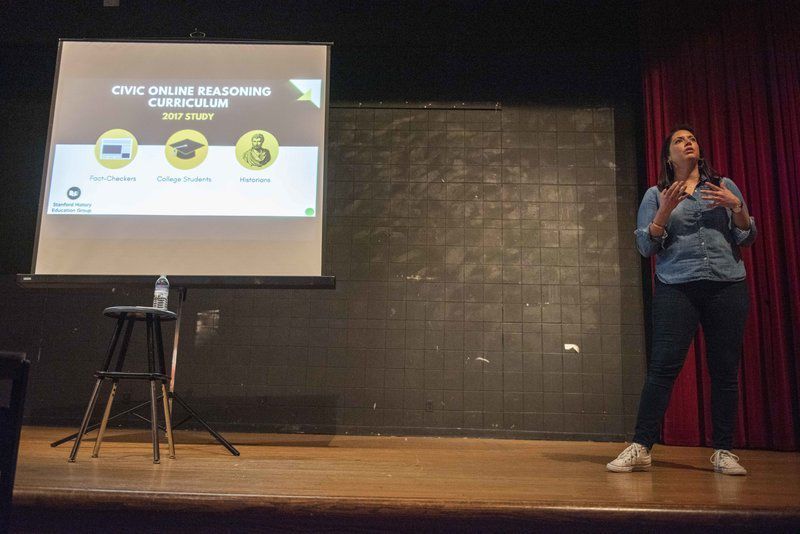 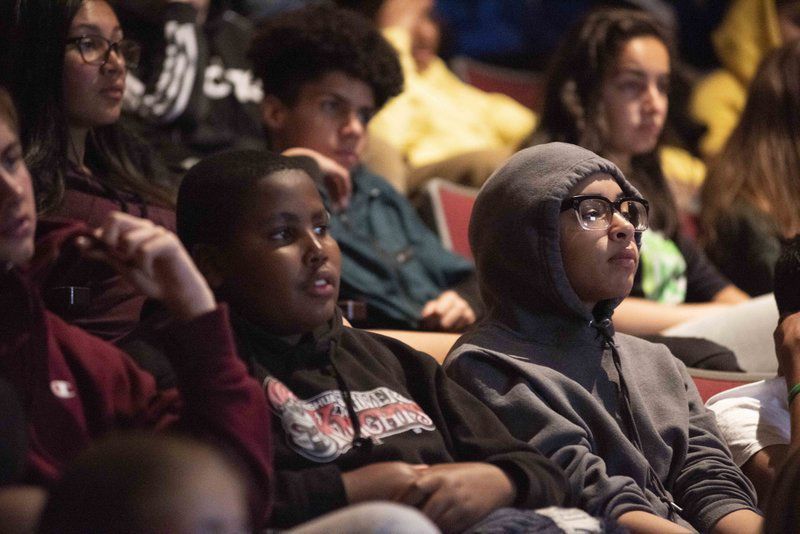 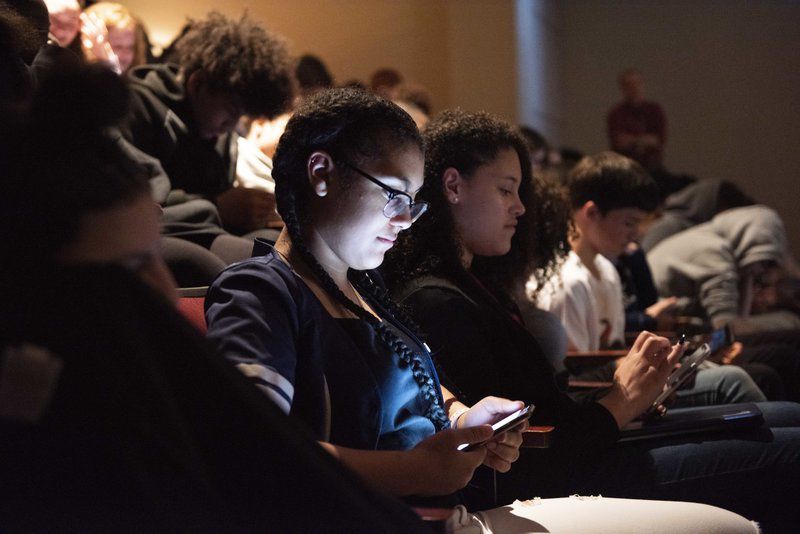 RYAN MCBRIDE/Staff photoAshley Ogando, 14, an 8th grader at Collins Middle School, uses her phone to during a 'fake news' exercise with MediaWise on Tuesday morning in Salem. 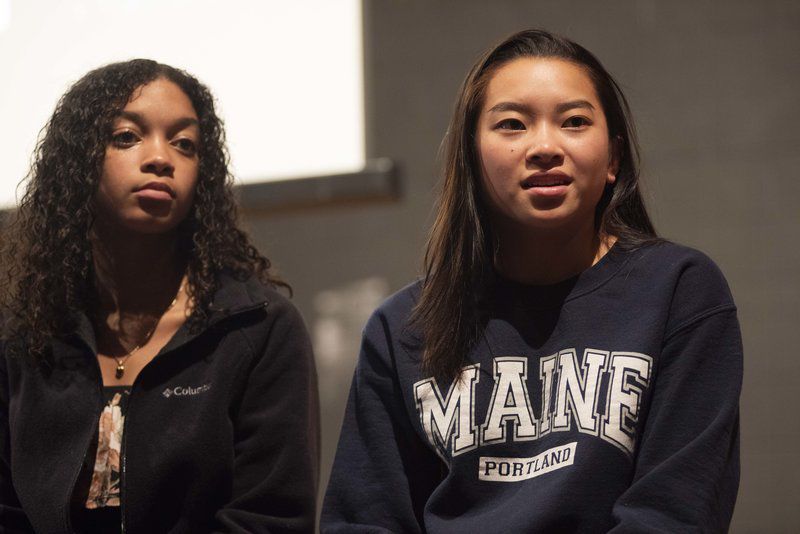 Shaely Lora, 14, left, and Mia Finn, 14, both in 8th grade at Collins Middle School, talk about their experience with MediaWise. 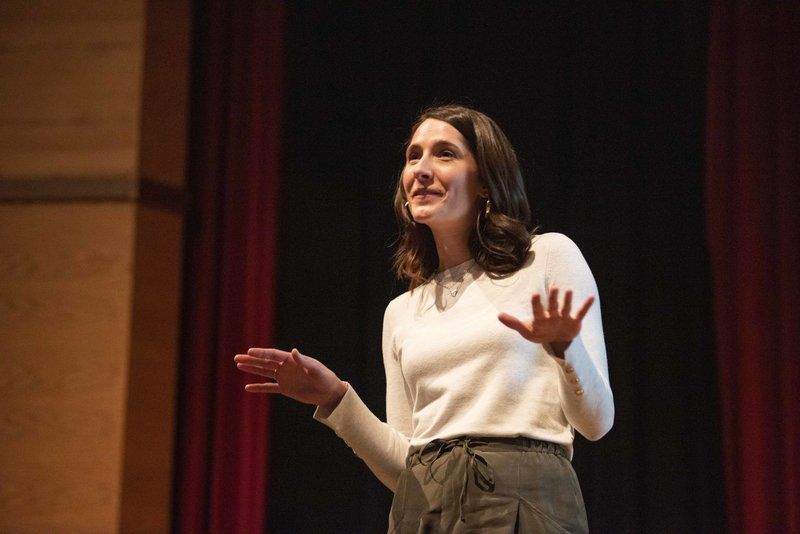 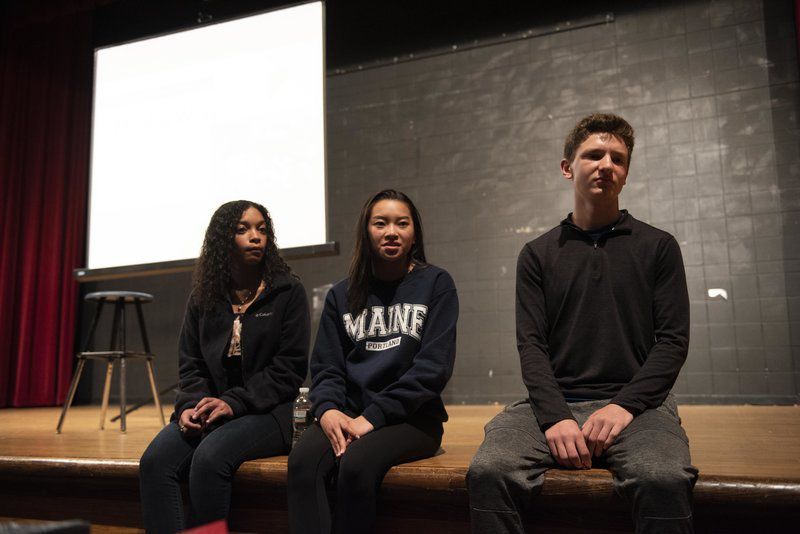 RYAN MCBRIDE/Staff photoAshley Ogando, 14, an 8th grader at Collins Middle School, uses her phone to during a 'fake news' exercise with MediaWise on Tuesday morning in Salem.

Shaely Lora, 14, left, and Mia Finn, 14, both in 8th grade at Collins Middle School, talk about their experience with MediaWise.

SALEM — Before Tuesday, 14-year-old Jake Fritz was aware of fake news reports, but thought they were a problem on world news media sites, “politics-type stuff.” It never occurred to him to wonder about his Instagram account.

Now he and other students on the North Shore are a little wiser in spotting fake news throughout social media.

Students at Collins Middle School and Salem High learned all about it in digital literacy presentations through the Poynter Institute’s MediaWise project. The program is also scheduled for schools in Beverly, Danvers and Gloucester this week.

“This is kind of the first time I’ve been hearing about it,” Fritz said of fake stories on social media. “We’d watch CNN10 every Friday. ... Sometimes there would be stuff about that on there, but not really on Instagram.”

MediaWise aims to teach 1 million teenagers how to tell fact from fiction online by 2020, with a focus on those living in underserved communities. The program was brought to the North Shore through the efforts of The Salem News and publisher Karen Andreas, a former board member at Poynter.

Andreas said she was thrilled to be involved with the MediaWise program.

“Teaching media literacy to our youth is vitally important to our democracy,” she said. “Educating the kids to have a healthy skepticism about what they’re reading, and how to fact-check, will allow them to be part of the solution instead of contributing to the problem of fake news.”

Katy Byron, a program manager for MediaWise, said the idea is to teach kids “how to spot misinformation, disinformation and to figure out on your own what is reliable, what is accurate and also what is unreliable and inaccurate.”

The presentation at Collins went over “deep-fake” videos — with comedian Jordan Peele providing a convincing but fake voice-over for video of President Barack Obama speaking — and “lateral reading,” the idea of vetting a topic by finding and reading multiple stories on it.

It’s a valuable set of skills for any adult, of course. But it’s just as necessary for teenagers who Byron said will soon be “deciding where to go for college, where to get their first jobs,” Byron said. “All these things are impacted by what they read and watch online, especially on social media — because we all know that kids spend a lot of time on social media.”

Disinformation is one of the biggest offenders covered by the program, as it is “especially engineered to elicit emotional interactions from people,” said Mel Grau, a marketing and communications writer for Poynter, a nonprofit journalism school and research organization in Florida. “In our roundup of teachers, when they talk about how they were fooled online, it’s really dramatic.”

Then there are other issues. For example, a quarter of teenagers don’t know the meaning of a blue checkmark verifying the authenticity of a famous person’s account, according to MediaWise. And 80 percent of teens can’t tell the difference between a news story and a native advertisement (paid or sponsored content that looks like a news story) when they’re mixed on news and media sites.

The presentation also showed students an example of a faked news image generated from a Salem News story about a measles case being confirmed in Massachusetts. Byron altered the story through a couple of different websites, then produced a fake tweet that appeared to be from the Salem News account suggesting there was a measles outbreak in Salem.

These are all issues students encounter just as much on Instagram and Snapchat as they do on CNN, according to Matt Condon, principal of Collins Middle School.

“Right now, we’re in persuasive essay writing in English language arts in all three grade levels,” Condon said. “A lot of the time we spend talking about bias, where is the writer coming from, and those lenses.”

“It’s critical for us ... to give students these non-traditional English language arts and social studies skills, expose them to them and somehow work them into our curriculum,” Condon said. “We try to have real-life connections.”

The connection to social media makes all the difference, according to the students. Mia Finn, a 14-year-old Collins eighth grader, is just one member of the crowd who — like Fritz — had an eye out for fake news only on news sites.

“I can say the same thing,” Finn said. “We never branched out into the social media apps.”

For more on MediaWise, visit poynter.org/mediawise/.

Topsham, ME - Richard M. Barton of Topsham, ME passed away peacefully on Friday, April 10, 2020 at Midcoast Hospital in Brunswick, Maine. He was 80 years old. Growing up in Salem, Mass. and Marblehead, Richard (Dick) was an avid sailor. He raced one-designs and enjoyed cruising with his fami…