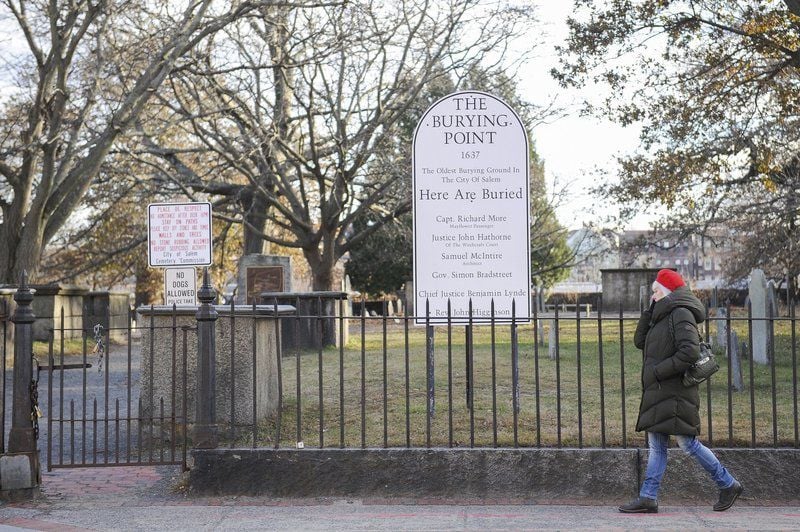 A historical gravestone found in Scituate may eventually be relocated back to The Burying Point in Salem. 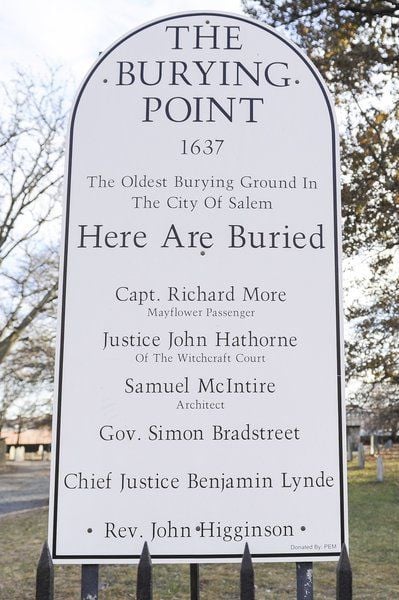 A historical gravestone for the Bowditch family found in Scituate may be traced back to Salem.

A historical gravestone found in Scituate may eventually be relocated back to The Burying Point in Salem.

A historical gravestone for the Bowditch family found in Scituate may be traced back to Salem.

SALEM — "Where lies ye children of William and Mary Bowditch?" A gravestone recently discovered in a Scituate garage has sent city officials to the history books to find out.

A missing gravestone for unidentified children of the earliest members of Salem's Bowditch family will return to Salem next week. It will be delivered by a pair of sisters who helped connect the discovery to the gravestone's rightful home at the Charter Street Burial Ground, one of the country's oldest cemeteries.

The stone, which is more than 300 years old and about 75 percent intact, was discovered more than a year ago in a garage in Scituate, according to Rachel Meyer, a stone conservator at Salem City Hall and co-owner of Epoch Preservation. It reads: "Here lies ye children of William and Mary Bowditch which died in their infancy."

After it was discovered, the stone was brought to the Scituate Archives, given that the South Shore town has its own Bowditch history and lineage. It stayed there for about a year as volunteers tried finding a William and Mary Bowditch who lived in town centuries earlier. A search turned up no trace.

It was then that a pair of sisters — Julie McDonough of Salem and Jody McDonough of Scituate — made the connection to William and Mary Bowditch in Salem. That brought them to Greenlawn Cemetery, where a search through records taken in 1874 captured the exact epitaph on a stone on Charter Street.

"I don't have any story of how it got here," Jody McDonough said of the stone's discovery in Scituate. "It just gives you a good sense of these little details, of what people do and how important it is 100 years later."

That's where the answers end and the questions — there are lots of them — begin. It's still unclear when the stone was taken from Charter Street, where exactly it belongs in the cemetery, how many people it memorializes, or how and when they died.

"Part of the problem is that we don't know what stones are missing all the time, because unfortunately, there's a lot of theft that goes on," said Kelly Ryan, an administrative assistant at Greenlawn who helped link the stone locally. "It's exciting that we were able to find this, but it's a needle in a haystack."

The Charter Street Burial Ground was established in 1637. It's the final resting place for several historic Massachusetts figures, including some connected to the Salem Witch Trials. Individual tourists, as well as walking tours, move through the cemetery throughout the year — so much so that officials are spending $600,000 to make repairs and investments there for preservation purposes.

William Bowditch has his own storied history. Born around 1664, he and Mary Bowditch had 11 children, five of whom apparently died soon after birth, according to records available at City Hall.

The elder William Bowditch is the namesake behind Bowditch Ledge, a hazardous geographic feature in Salem Harbor that recently lost its historic stone daybeacon. He crashed the ship Essex Galley on the ledge in 1700. His great-grandson, Nathaniel Bowditch, would later become one of the world's best-known sea navigators and the namesake of countless landmarks, schools, buildings and more around New England.

Of the 11 children born to William and Mary Bowditch, four of them were also named Mary and William:

Of the other children, Thomas Bowditch was born June 5, 1698, and died that November. Eunice Bowditch was born June 8, 1705, and she died a month later. The other five children on record — Sarah, Joseph, Ebenezer, Eunice (a second one) and Daniel — all born between 1693 and 1709, don't have their deaths recorded in the same place their births are listed.

So, while it's a recorded fact that the Bowditches had children who died shortly after birth, this gravestone still may not belong to any of those children, according to Meyer.

The stone has no date on it, and the names of the "infants" it represents aren't listed, Meyer said. In fact, the only thing linking the stone to the Mary and William Bowditch alive during the 1690s and 1700s is the fact that the engravings match styles heavily used by two carving franchises that existed at the time: Mumford and Lamson.

"They worked in that style," Meyer said. "In fact, the Lamson shop were apprentices of Mumford."

To that end, the children buried at the headstone could've been stillborn or deceased almost immediately after birth — in which case the births may not have been officially recorded, according to Ryan.

"We don't know if it was one baby, two babies, three babies ... died in childbirth, was one day old, two days old," Ryan said. "There's no year on it. Sometimes, you can try to go back (with a date). If there were medical epidemics that happened, and a lot of people died, there might be a year for that, or if there was a tuberculosis outbreak. But there's nothing that says what happened."

The investigative work now to uncover another part of Salem's earliest history is just beginning.

The stone will return to Greenlawn Cemetery first next week for months of preservation work, Meyer said. A return to its rightful grave — if one is identified — should happen next spring, once the ground thaws.

Salem officials are also further imploring anyone who has similar pieces of New England history to turn them in.

"It's very easy for objects to lose their context. If people have these artifacts in their homes, it isn't that uncommon," Meyer said. "I want to make sure we're creating an environment where people can return artifacts without harsh repercussions."