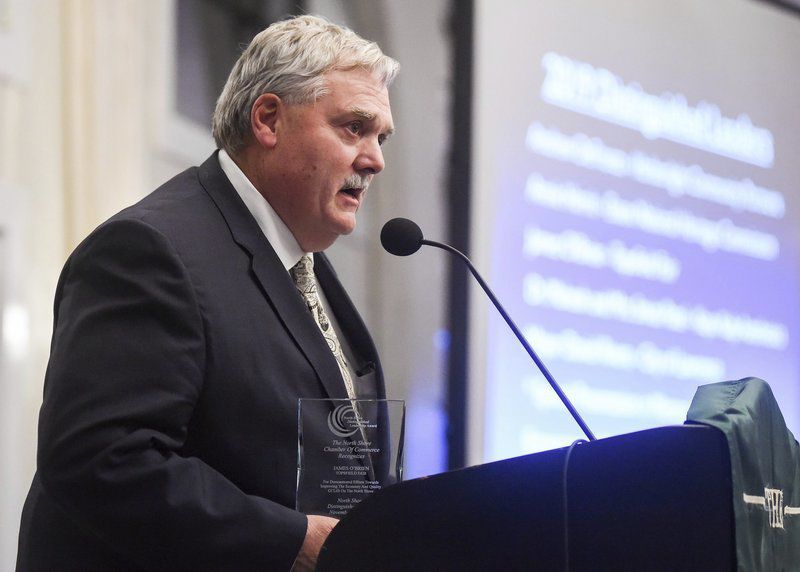 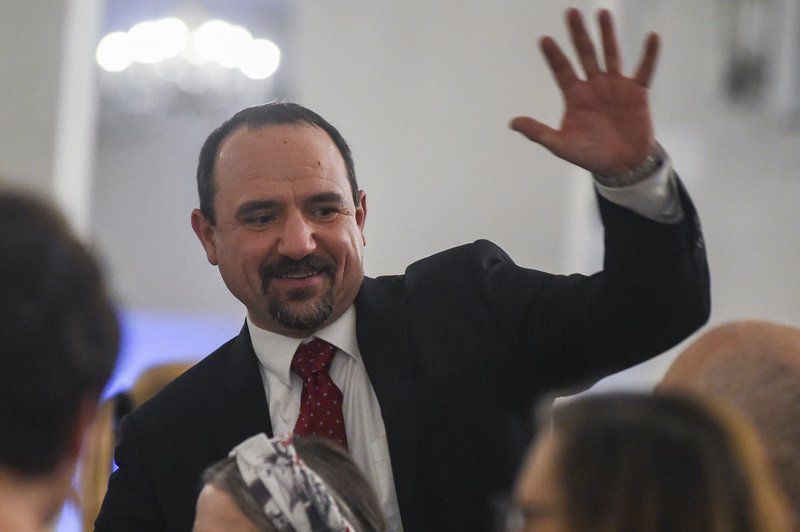 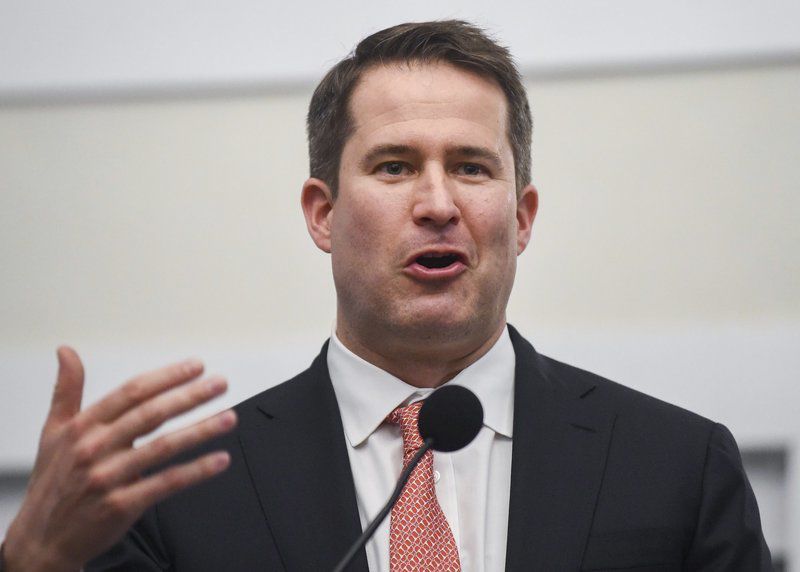 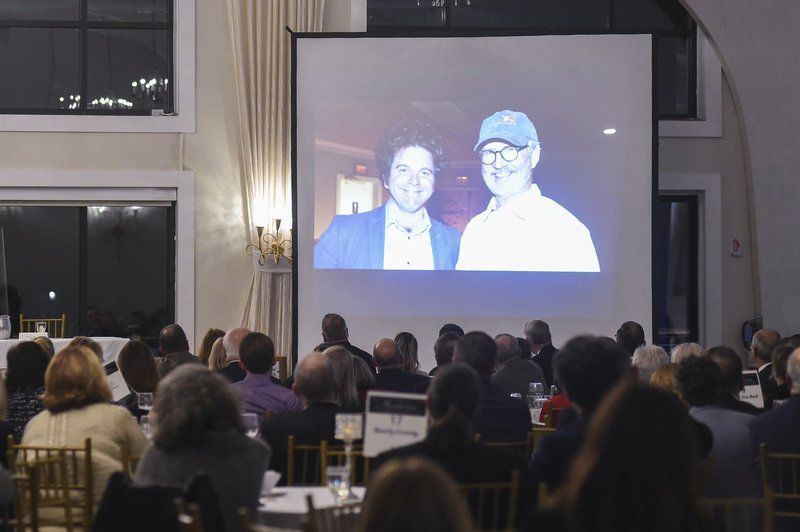 Honorees bigger than life at the North Shore Chamber of Commerce Distinguished Leaders awards dinner in Danvers on Thursday night. 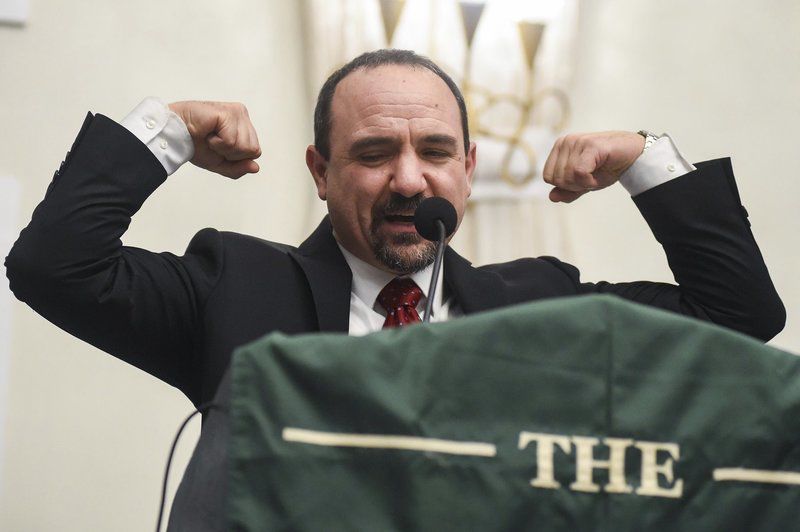 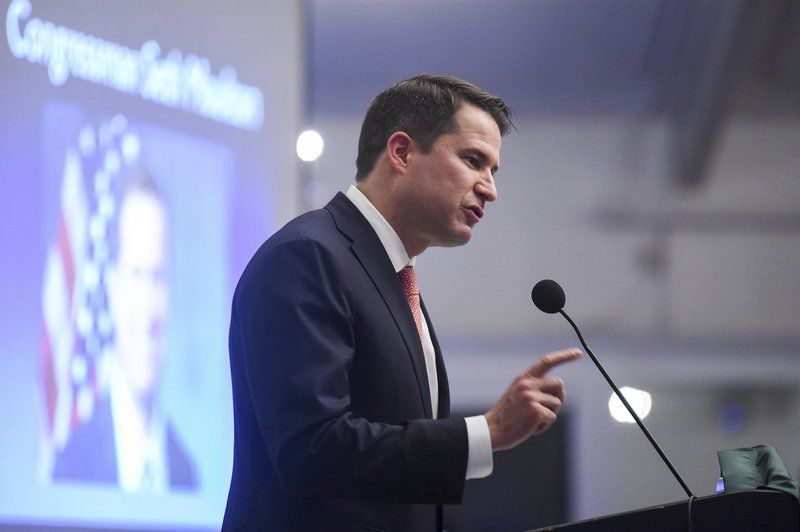 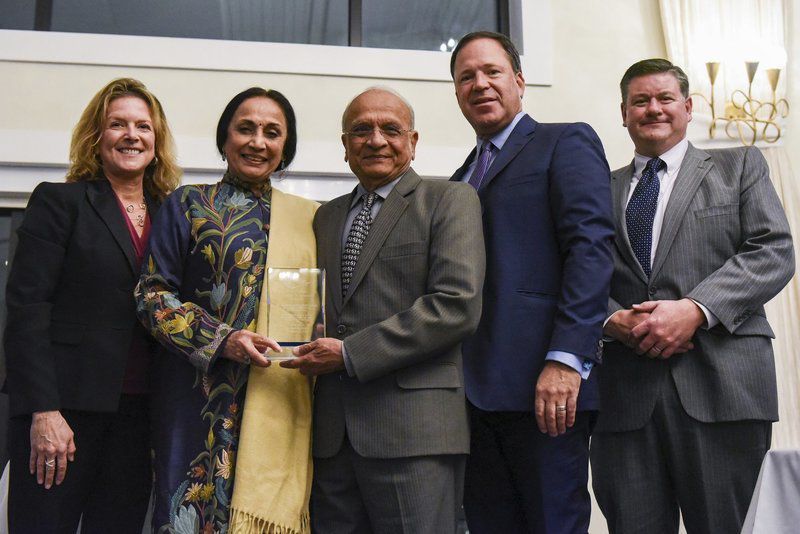 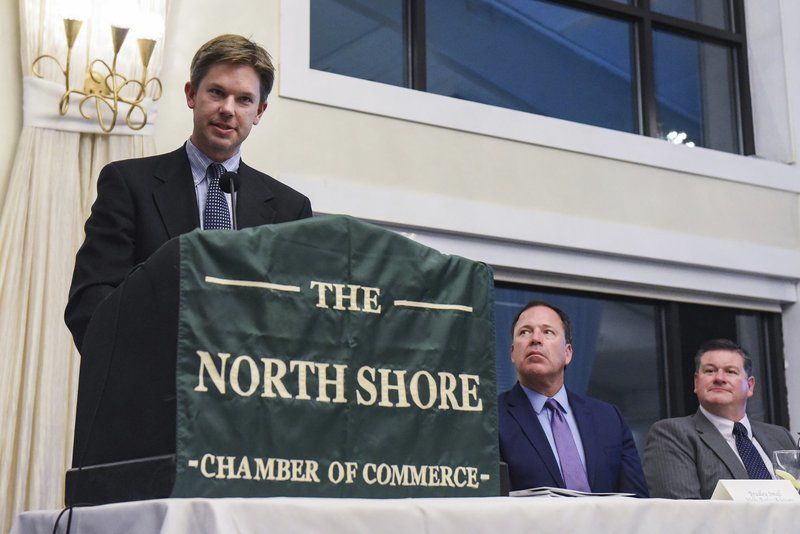 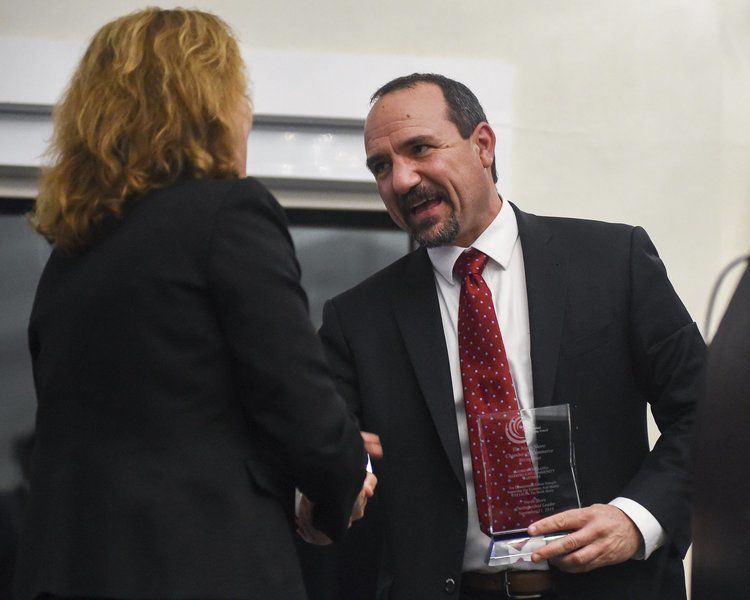 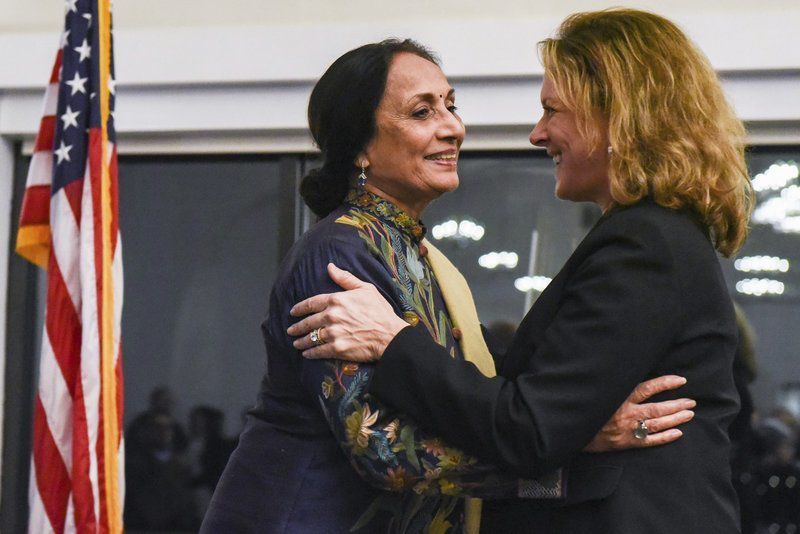 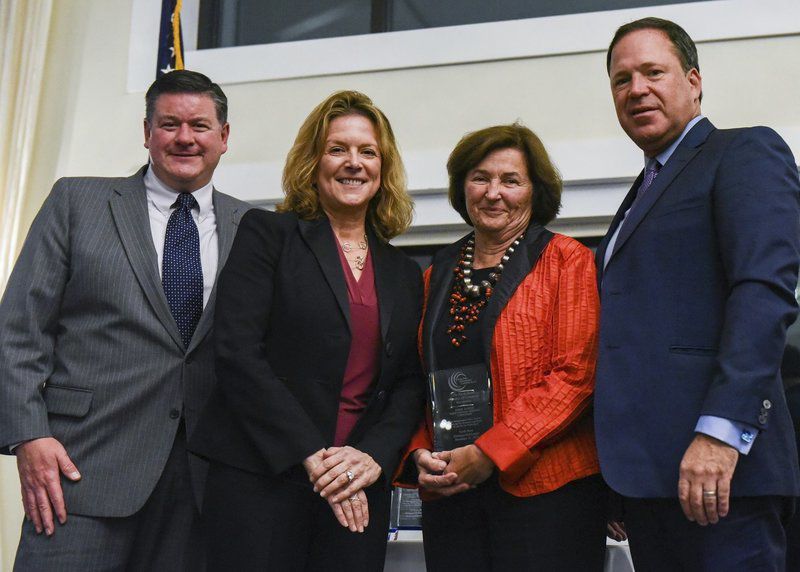 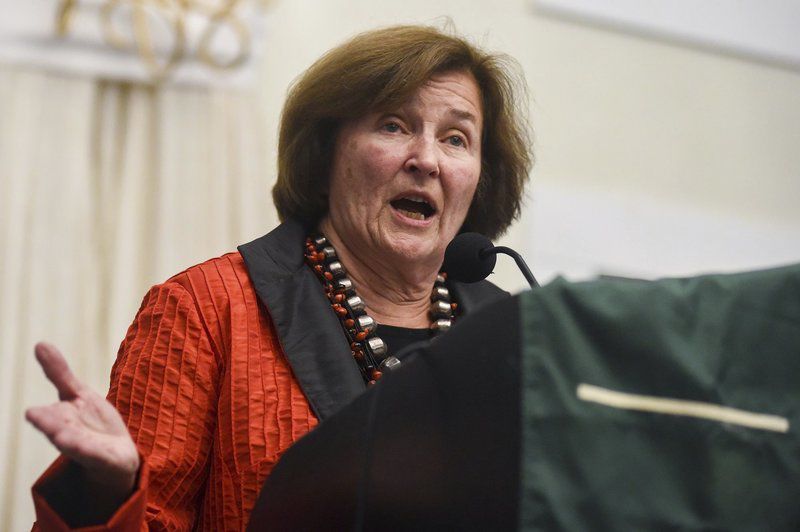 Honorees bigger than life at the North Shore Chamber of Commerce Distinguished Leaders awards dinner in Danvers on Thursday night.

DANVERS – Impeachment might be dominating the national political scene, but Congressman Seth Moulton on Thursday night spoke to North Shore business leaders about another contentious topic closer to home – traffic.

In a speech before more than 500 people at the North Shore Chamber of Commerce's 101st annual dinner meeting at Danversport, Moulton said improving the state's transportation system is "essential" to economic success.

"Our region is the nation's leader in bad traffic," Moulton said. "And if we want to lead the next generation economy . . . we must reimagine our communities and our commutes."

Moulton, a Democrat from Salem, said the state needs to fundamentally transform not only its transportation system but "our transportation experience," shifting the emphasis and attitudes away from highways and automobiles and toward commuter rail and light rail systems.

Moulton said rail and transit is not a priority in Massachusetts, despite what people in the State House might say. In fact, he called any suggestion the state is prioritizing rail transportation "frankly insulting."

Moulton said the commuter rail line to Salem is "basically unchanged" since it started in 1837. The state built a new train station in Salem in 2015, but Moulton pointed out that it has no roof or heating and people have to walk through a "half-inch layer of salt" to get to the train.

"This is how we treat the citizens of Massachusetts who commute to work by train," he said. "We treat them like second-class citizens – frankly, like steerage."

Moulton said Massachusetts must make commuter rail faster than driving and offer trains as inviting as they are in Europe.

"Hedge fund managers in London don't commute to work by train because they can't afford Rolls Royces," he said. "Business men and women in Germany don't take trains because they don't have Mercedes or the speed limit on the Autobahn is too low. Traveling by train in these countries is faster and nicer than driving."

Moulton appealed to the business leaders in the room to play a role in changing the system, arguing that it is a "business case" as much as a matter of environmental, racial and social justice concerns. He cited the example of New Balance building a new headquarters while partnering with the city of Boston to help fund the new Allston-Brighton commuter station.

Moulton has been a proponent of projects such as the Blue Line Extension for Lynn and the North-South Rail Link that would connect North and South Stations. He said his vision includes a scenario in which a Salem resident can get to downtown Boston in 20 minutes and get off at South Station, North Station, or a new Central Station, then wait five or 10 minutes for a train to anywhere else in the Northeast corridor.

Moulton said it is a "myth" that electric or autonomous vehicles will make trains obsolete. He said he and his wife own a Chevy Volt electric car, "but it doesn't go any faster or create any less congestion than all the gasoline-powered vehicles on the roads."

Moulton said it's not too late or too expensive for Massachusetts to change its transportation system. The city of Denver built light rail and commuter rail systems "from scratch" in the last couple of decades and is now the second most walkable metro area in the country, he said.

A soon-to-be-released report by the Harvard Kennedy School on the inequities in the state's spending priorities, which encourage traveling by car and by plane, will show subsides for the rich that "will blow your mind," Moulton said.

"We, in Massachusetts, deserve better," he said. "And to be competitive we need to deliver something much better."