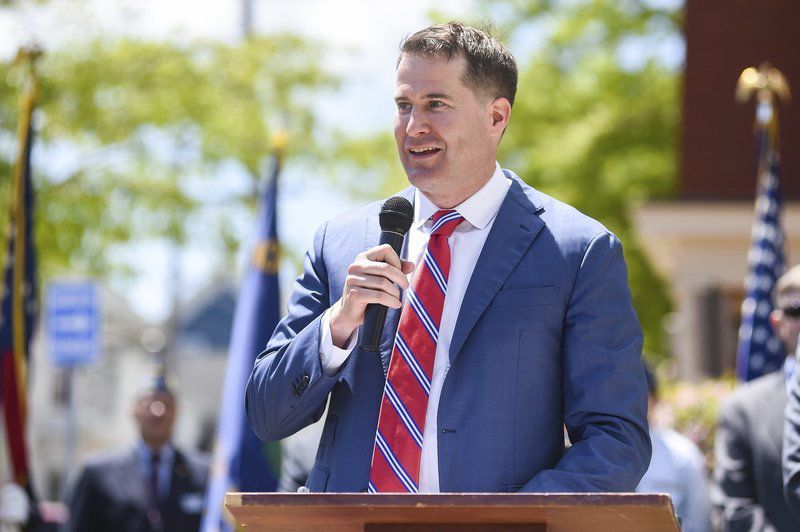 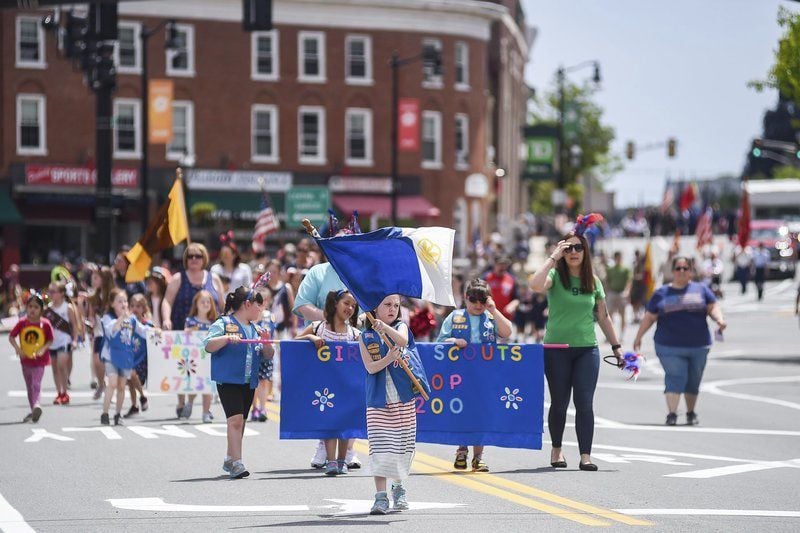 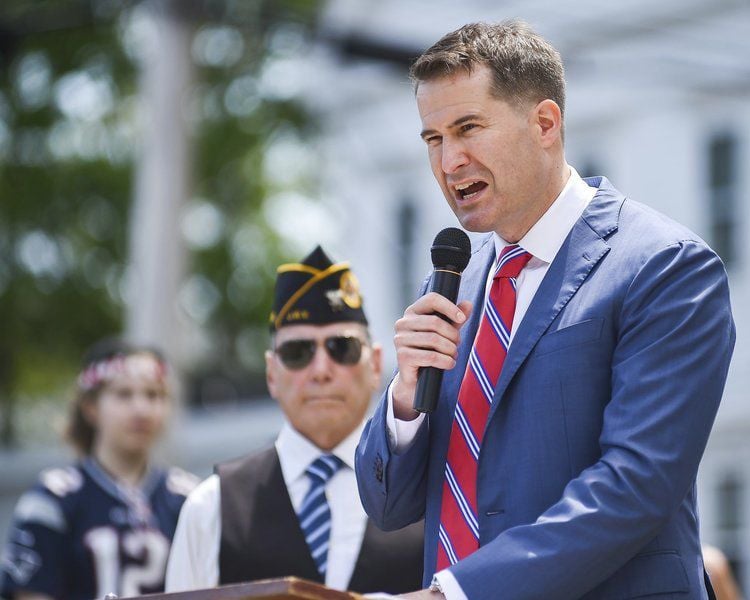 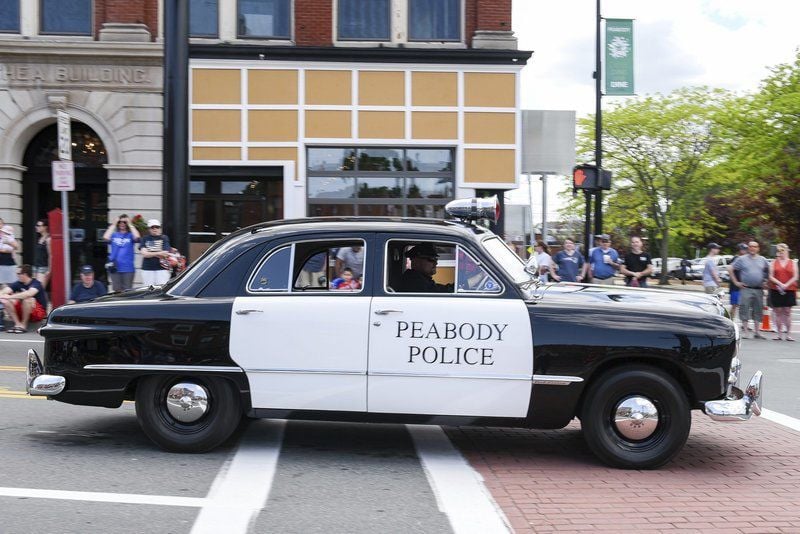 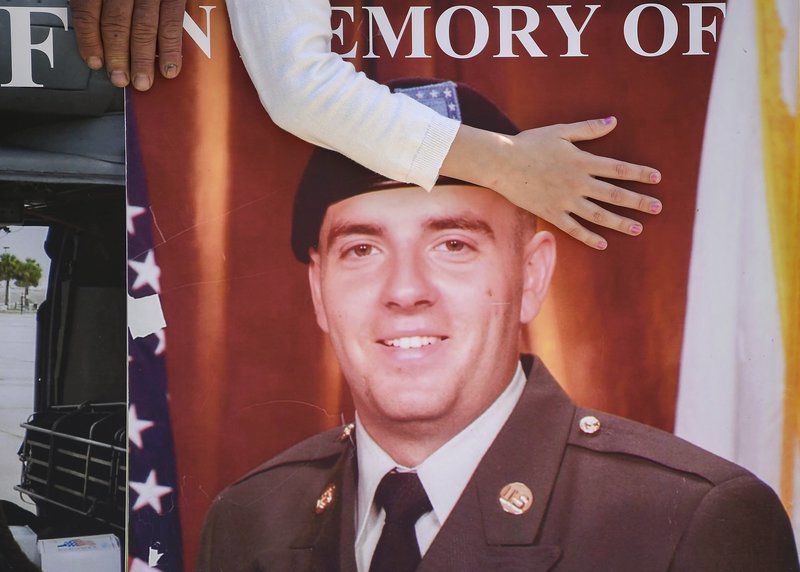 A poster in memory of Specialist Scott Damon is held during the Memorial Day festivities in Peabody. (Editor's note: This caption has been updated since its original publication to correct Scott Damon's name.) 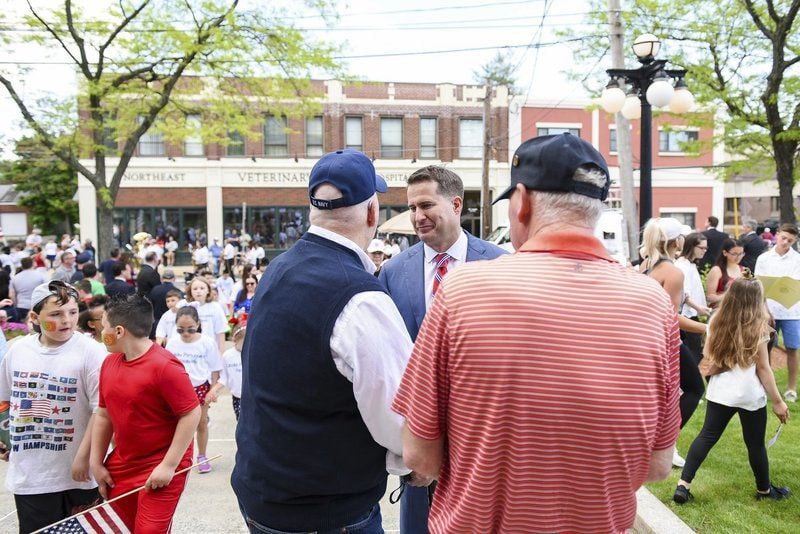 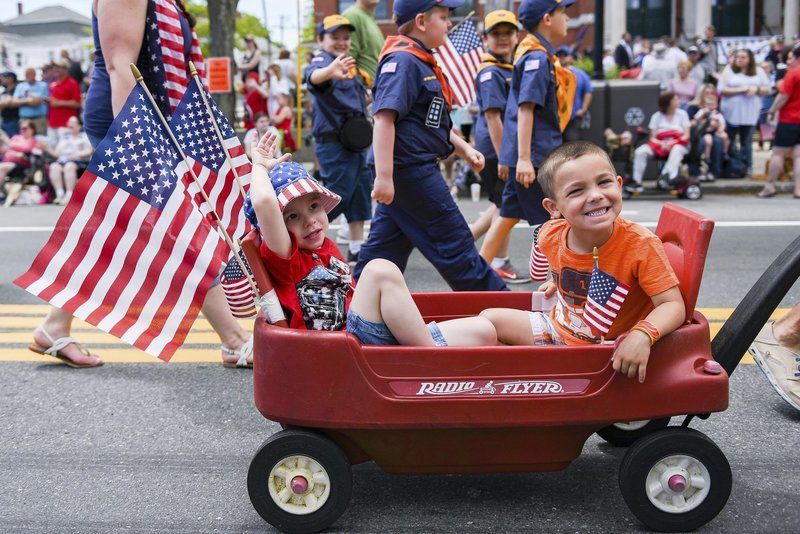 JAIME CAMPOS/Staff photoTyler Cream and Brandon Wozniak enjoy their time in the parade during the Memorial Day festivities in Peabody. 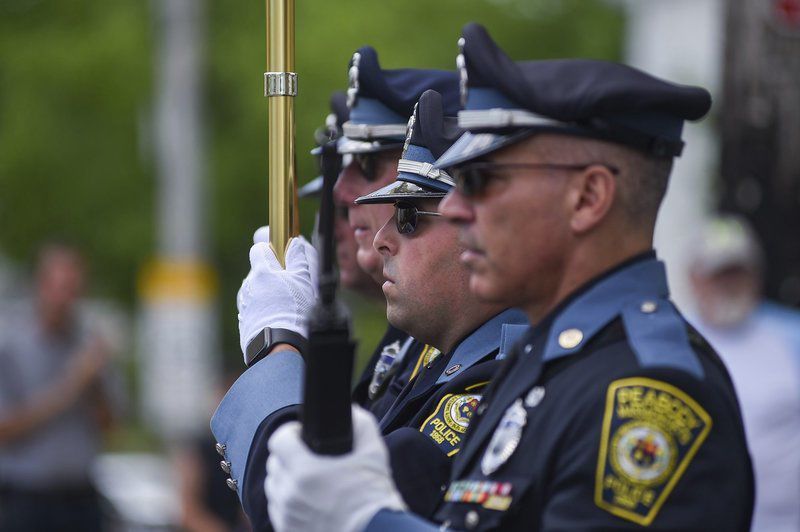 A poster in memory of Specialist Scott Damon is held during the Memorial Day festivities in Peabody. (Editor's note: This caption has been updated since its original publication to correct Scott Damon's name.)

JAIME CAMPOS/Staff photoTyler Cream and Brandon Wozniak enjoy their time in the parade during the Memorial Day festivities in Peabody.

Editor's note: This article has been updated since its original publication to correct the spelling of U.S. Army Specialist Scott W. Damon's name.

PEABODY — Townspeople turned out in droves Monday — whether for the perfect weather, the parade, the Memorial Day speech by Congressman Seth Moulton or a chance to honor those who died for their country.

Hundreds came for the parade, perhaps, but they stayed, for the speeches — and to remember.

Moulton, a three-term congressman running for the Democratic nomination for president, is a Harvard graduate and a U.S. Marine Corps officer who served four tours of duty in Afghanistan and Iraq. On Monday he spoke of some of what he brought away from that experience.

He began by thanking the crowd for coming out to honor our veterans, "most specifically, those who didn't come home."

Then he told a story about one of his heroes from the Iraq war.

"Memorial Day is a time when Americans are supposed to evaluate war's true human cost — And for those of us who have experienced it first-hand, it is very personal.

"As I am reflecting this weekend on the brave Americans we've lost, especially in the ongoing wars in Iraq and Afghanistan, I'm also thinking about people like my friend James Hassel, who didn't die in Iraq, but died because of it."

Hassel was in Moulton's second platoon in the war. He saw some of the toughest fighting, when they were in the battle of Najaf in 2004.

The platoon was pinned down in a building when one of the Marines, a young man from Vermont named Ryan, was injured by a grenade. His wounds looked bad on the outside, Moulton recalled, but his internal bleeding was worse, and Hassel recognized that someone needed to act.

"Without hesitating, he put Ryan on his back and carried him through about 60 yards of machine-gun fire, to an area safe enough to get Ryan evacuated. James saved Ryan's life, at great risk to his own," Moulton said.

A couple of years later, as Hassel started a new chapter in his life, a reporter from a newspaper in California interviewed him about returning home from war, and he told the reporter, 'All I want to do is to live the American dream that I fought so hard to protect. All I want is a little bit of a normal life.'

Hassel also wanted to continue serving, so he went to school, got a degree in nursing and landed a great job in an emergency room, so he could continue serving – saving lives here – back home, Moulton said.

But Hassel also dealt with post-traumatic stress, and so he went to the VA for help. But, Moulton said, rather than give him the counseling he requested, they just gave him medication, "so much that just by taking the pills he was prescribed, James died of a heart attack when he was 30 years old."

"I'm thinking of him today because he's one of my personal heroes — and he was my friend. James is also on my mind, because our country needs to remember that even those who make it home from war can still die because of it."

Moulton said Hassel's death was not a suicide, but every day in this country, suicide kills 20 veterans. Opioids are taking veterans' lives, too. Vets are twice as likely as non-vets to die from an accidental opioid overdose, he said.

"We must honor those lives today as well. Memorial Day is a day to remember those we've lost. It is not a day for calls to action, or policy debates, so I won't say any of that. But I will say this: Live up to James' dream — Spend time with your family, enjoy this amazing weather ... light the grill or watch a game. That's how James would have wanted us to honor him."

But Moulton also urged those in attendance to remember to pause and reflect on Americans who made the ultimate sacrifice for our country.

"Try to learn their names, and their stories, so their sacrifices are not forgotten," Moulton said. "And come tomorrow, on Tuesday, let's honor those we lost by recommitting ourselves to making sure we don't lose anyone else. Because the wounds of war are not just the ones we can see — and every veteran deserves a country that fights as hard for them as they fought for us."

Speaking after Moulton, Peabody Mayor Edward Bettencourt reminded the audience we were there for not just the "city heroes inscribed on our monuments here at City Hall, and other monuments across our city," but for the many other men and women who served across the years, "Peabody's heroes who made the ultimate sacrifice."

But, he said, picking up on Moulton's final theme, "Memorial Day also presents an opportunity for Americans to reflect upon the loss of life because of war.

"Those who make it home often times suffer silently from the invisible wounds of war. It is estimated that at least 20 percent of Iraq and Afghanistan veterans suffer from PTSD. Fifty percent of those with PTSD never seek treatment. Across America, 20 veterans a day lose their lives to suicide and other PTSD-related causes," the mayor said.

He then called forward family members of four fallen Peabody fallen heroes, who will each be honored with street signs dedicated in their memory and to be located later, in consultation with family members.

— Private Richard Coy, USMC, who went on to serve two tours of duty in Vietnam despite critical wounds suffered while saving another Marine. He died Jan. 12, 2017.

— Private Daniel "Buddy" Flynn, U.S. Army, died at 18, on August 13, 1945, the last day of WW II. His younger sister, 11 at the time, remembers the day two weeks after the war ended, that his mother received a telegram informing her of his death.