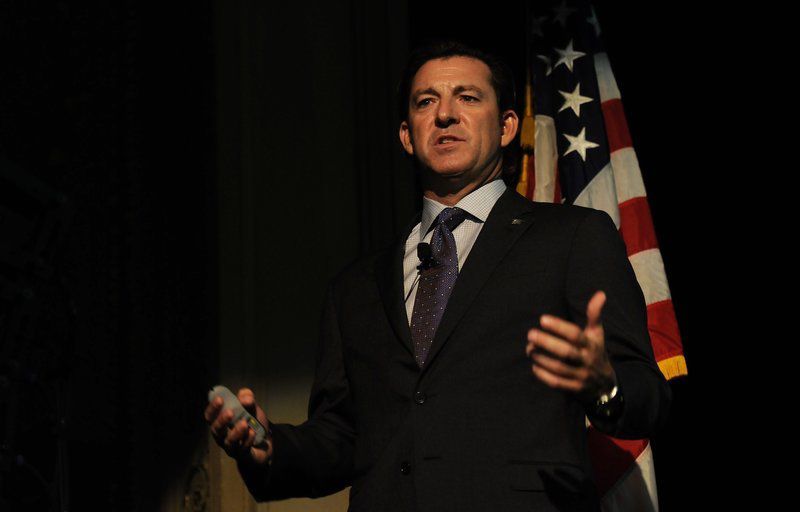 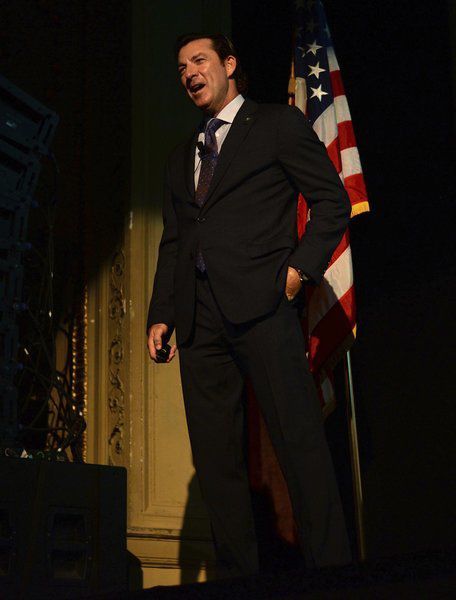 BEVERLY — Mark McGinnis, a former U.S. Navy SEAL who led more than 400 SEAL operators through "real world operations and training evolutions" with no mishaps, gave an inspirational and poignant talk about the lessons he learned through his legacy of service to an audience of 150 veterans, business leaders and others at the Cabot Theatre Tuesday night.

The community event was presented by MassPay, a Beverly-based payroll and human resources company. Those in attendance got a glimpse of the grueling training it takes to become a SEAL in which nine out of 10 who enter the training do not finish it.

"I think the point of tonight's talk is to understand that living a life of purpose, right, is important," McGinnis said before his talk. "And I think if we think about others a little bit more than we think about ourselves, the world's going to be a better place."

During his long career as a SEAL, McGinnis served in the Caribbean, Central and South America, North East Asia, the Pacific Rim and the Middle East.

The Austin, Texas resident spoke about the successes and failures of the nation's elite special operators. He also spoke about his professional leadership training work and the work he's doing as managing director of a nonprofit founded by SEALs in 2011 called the SEAL Legacy Foundation, which provides support to families of wounded or fallen SEALs in the spirit of their legacy: "No one left behind." (www.seallegacy.org).

"We are hosting this event to honor Navy SEALs and their commitment and sacrifices they make to our country," said Jason Maxwell, MassPay's found and CEO. "A lot SEALs, veterans, are dealing with issues such as PTSD, depression, anxiety, brain concussions, and we want to do our part to support those in need."

Maxwell, who is not a veteran, formed a friendship with McGinnis a few years ago through a human capital management organization, and Maxwell decided he wanted to host an event locally to honor veterans and support the SEAL Legacy Foundation.

The foundation raises money for families of fallen SEALs for such things as educational costs for their children or medical support for individuals with a variety of psychological or physical challenges.

"What impresses me about Mark is his love and commitment to his brothers," Maxwell said, "and part of being a SEAL is 'no one left behind,' you don't leave anyone behind, and that's on the battlefield, and Mark has taken it to the next level to make sure that his brothers aren't left behind after they leave their tour of duty in the service."

McGinnis gave kudos to Maxwell for not only supporting the foundation, but setting an example by holding the event to expose the audience "to something bigger than themselves that they can get behind."

In that spirit, the idea of people helping others is now evident in flood-ravaged Houston, McGinnis said.

"Houston's a great example, right. It's not going to be the federal government that goes in there that saves the day, it will be the average citizen, helping a neighbor, right? It will be the Cajun coast guard, you've seen them on TV, right. It's local people who care about others who are getting involved."

McGinnis had a circuitous route to becoming a Navy SEAL, he said. He graduated the U.S. Naval Academy, where he played football, in 1993. Having "majored in football," he joked he was in the top 87 percent of his class. He did not make SEAL training at that time, and instead went into the Marines and became an aircraft maintenance officer.

McGinnis could not shake his lifelong dream of becoming a SEAL, and in 1996 he completed the training, becoming only one of four Marine officers to transition to the SEALs. From 2002 to 2004 he went to work for sales for a biomedical company before rejoining the SEALs. He just separated from the Reserves this past year, he said.

"I think it's a great opportunity to hear from a Navy SEAL, his life experiences, what they go through, and talking about leadership," said state Rep. Jerry Parisella, D-Beverly, a veteran of the Army Reserves who served most of his first year as a state lawmaker deployed in Iraq serving as a legal adviser to a medical brigade. "Obviously they go through some pretty difficult circumstances and probably some unimaginable situations that they have to deal with."

The chairman of the House Committee on Public Service said the turnout to the event showed people's support of veterans in Beverly and on the North Shore.