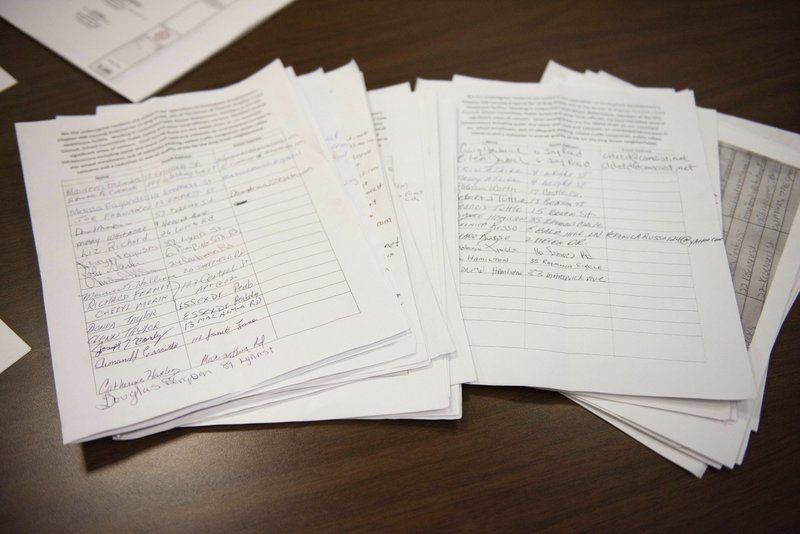 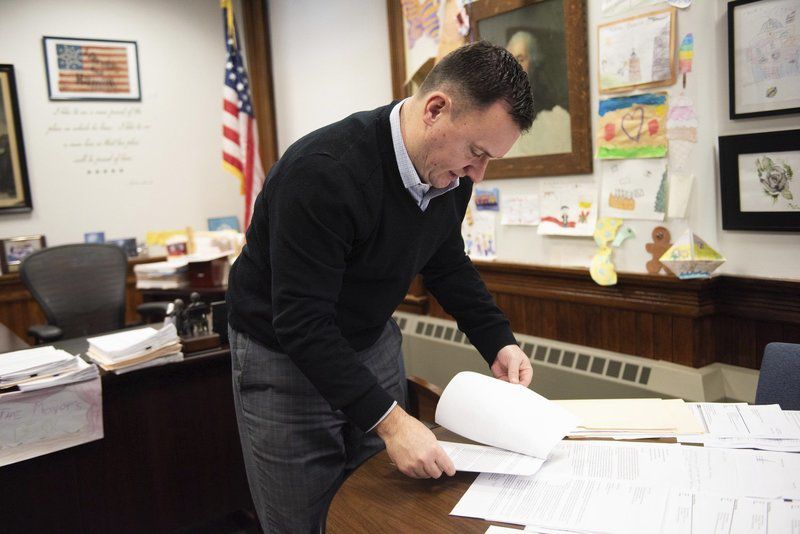 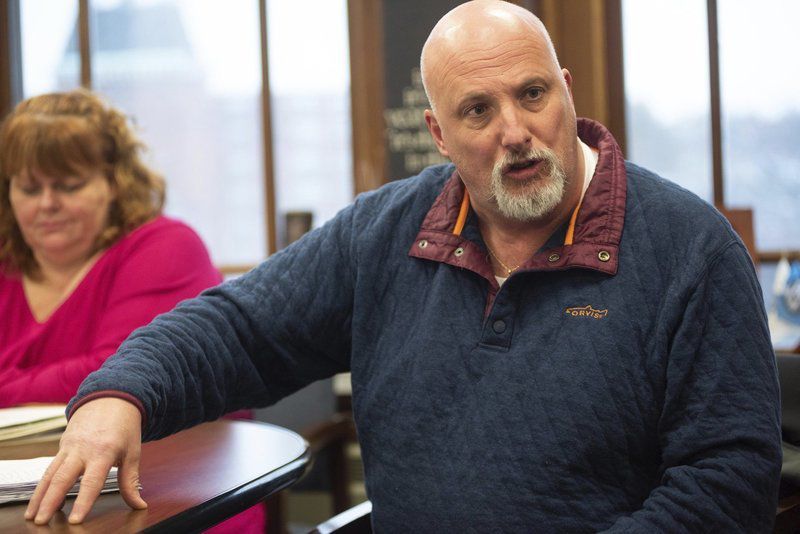 Ward 4 city councilor Ed Charest talks about the voices of residents, who sent in written letters and signed a petition opposing the 40B project at the former J.B Thomas Curahealth hospital site on 15 King Street. RYAN MCBRIDE/Staff photo 2/13/20 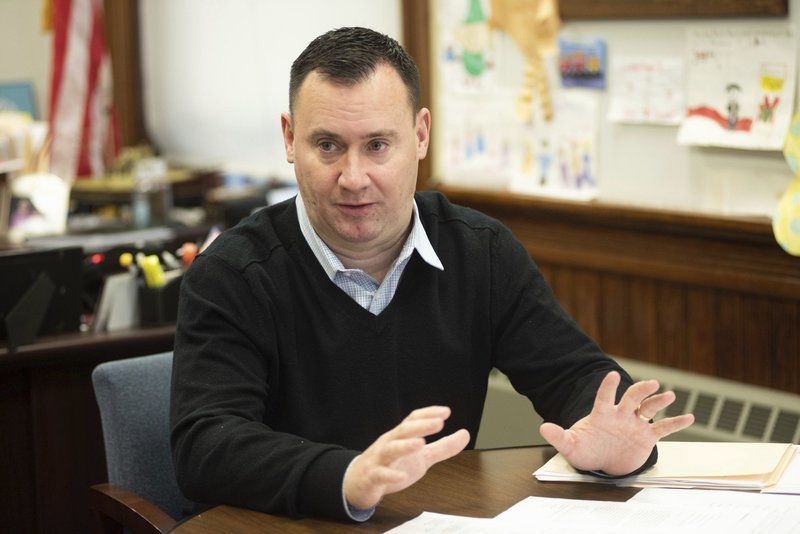 Mayor Ted Bettencourt talks about the voices of residents, who sent in written letters and signed a petition opposing the 40B project at the former J.B Thomas Curahealth hospital site on 15 King Street. RYAN MCBRIDE/Staff photo 2/13/20

Ward 4 city councilor Ed Charest talks about the voices of residents, who sent in written letters and signed a petition opposing the 40B project at the former J.B Thomas Curahealth hospital site on 15 King Street. RYAN MCBRIDE/Staff photo 2/13/20

Mayor Ted Bettencourt talks about the voices of residents, who sent in written letters and signed a petition opposing the 40B project at the former J.B Thomas Curahealth hospital site on 15 King Street. RYAN MCBRIDE/Staff photo 2/13/20

PEABODY — More than 380 people have signed a petition and about 50 people have penned letters to MassHousing opposing the planned redevelopment at the former J.B. Thomas Hospital.

Residents and city leaders are concerned that the 133-unit condominium project, called King’s Residences, will overwhelm the Emerson Park neighborhood.

The developer is seeking a comprehensive permit under the state’s affordable housing law known as Chapter 40B and needs a site approval eligibility letter from MassHousing to proceed. The letters and the petition will be delivered to the agency on Tuesday, in time to meet a public comment period deadline for the project.

“The sheer size of this project is completely out of scale for this neighborhood,” wrote Emerson Street resident Stephanie Najjar. “With a Chapter 40B proposal, I look to your board to consider the impact on residents and their quality of life. We are taxpayers and deserve that the board make reasonable decisions regarding this project.”

In their letters, residents fear increased flooding and traffic, including the impact the project would have on kids walking or riding their bikes to school. A lack of public transportation in the neighborhood, they wrote, would mean residents of the condo development will rely on cars to get around, adding to the congestion.

Some letters cite a lack of parking in the neighborhood and what neighbors believe is inadequate parking being proposed in the condo development.

“Our little neighborhood is already suffering from gridlock,” wrote James Street resident David Carlson. “We have parents trying to drop off or pick up students. Our streets are used as a cut through from one end of our city to the other. On an average day, just trying to get out of our neighborhood can take 10 minutes just to get to Lowell Street.”

The city is worried the project will mean more students at the Center Elementary and the Higgins Middle schools, which are already at capacity. In its letter to MassHousing, the School Committee said the Center School “is in deplorable condition.”

“There is simply no room to accommodate any additional students or staff to teach any more students at the Center School,” they wrote.

The city’s new Higgins Middle School, which opened in 2016, was built with enrollment projections that there would be “no significant increase or decrease in the number of students that attended this school.” It’s already at capacity at more than 1,400 students.

In an interview, Mayor Ted Bettencourt said the city’s concerns center on quality of life for neighbors. The city is not against affordable housing, he said.

“Really, I think, the theme of these letters and the theme of our opposition has been just the impact this would have on our infrastructure, our water and sewer, snow removal, clearing sidewalks, clearing roads during storms; and then certainly, public safety, motor-vehicle access, making sure we have police and fire truck access to the sites and those neighborhoods,” Bettencourt said. “Parking concerns are a big one here.”

In a statement, Hemisphere Development said: “We look forward to receiving the feedback from the community that was submitted to MassHousing, and to continuing our outreach to residents throughout the city.”

A community meeting for residents who oppose the project is scheduled for Monday, Feb. 17, at 7 p.m., in the social hall on the lower level of St. John Lutheran Church, 32 Ellsworth St.

The letters and the petition came after Bettencourt solicited the neighborhood’s feedback last month during a packed community meeting.

On Tuesday, city officials plan to hand deliver the packet of letters and the petition sheets to MassHousing’s office in Boston. The independent quasi-state agency provides financing for the construction of affordable housing in the state. In this case, it provides regulatory oversight for the 40B project.

Bettencourt did not know by when MassHousing would make a decision.

Ward 4 Councilor Edward Charest’s concern is that the 40B process would allow the developer to skirt zoning that protects the neighborhood. For instance, the project would have less parking than required under the city’s zoning ordinance.

“It also allows them to increase the height of the buildings (more) than our zoning would allow,” Charest said.

Chapter 40B allows developers to seek a comprehensive permit and override most local zoning in exchange for affordable housing in communities where less than 10% of the housing stock is deemed affordable by the state. Peabody’s inventory of low- and moderate-income housing is just shy of that threshold. Communities at or above 10% can more easily fend off such projects.

The proposal would include 34 affordable condos, 25% of the total units.

This plan is the latest twist in the two-year effort to redevelop the site of the vacant hospital. Last year, Hemisphere Development withdrew a special permit application for 110 senior condos. Over the two years, developers had reduced the amount of condos from 150, and came back with different plans. Unlike the former plan, the new proposal is not age restricted.

Bettencourt said his focus is not on what was, but on “what’s in front of us now.”