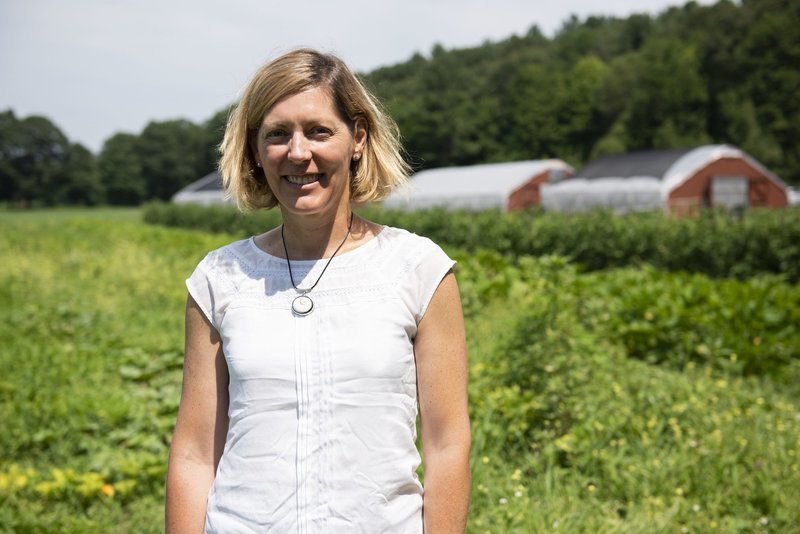 Ryan McBride/Staff photoJennifer Hashley, project director at New Entry Sustainable Farming Project, at the nonprofit's new location at Moraine Farm in Beverly. The organization has a 10-year lease with The Trustees of Reservations to occupy 15 acres of farmland there. 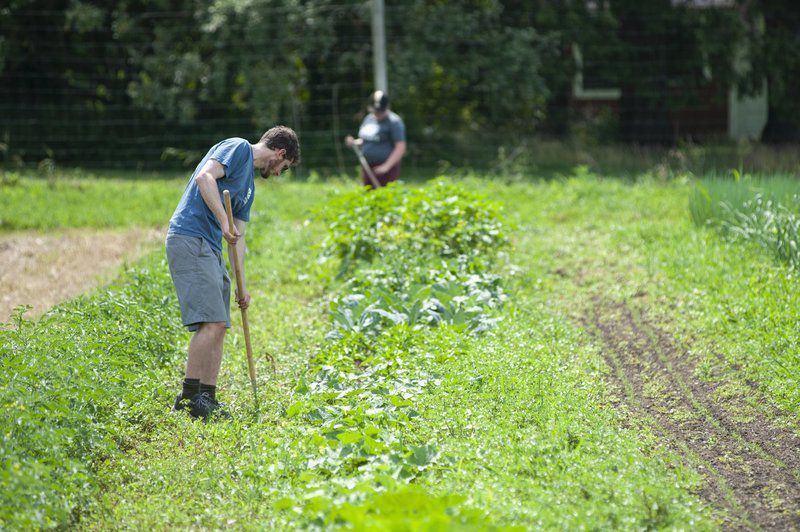 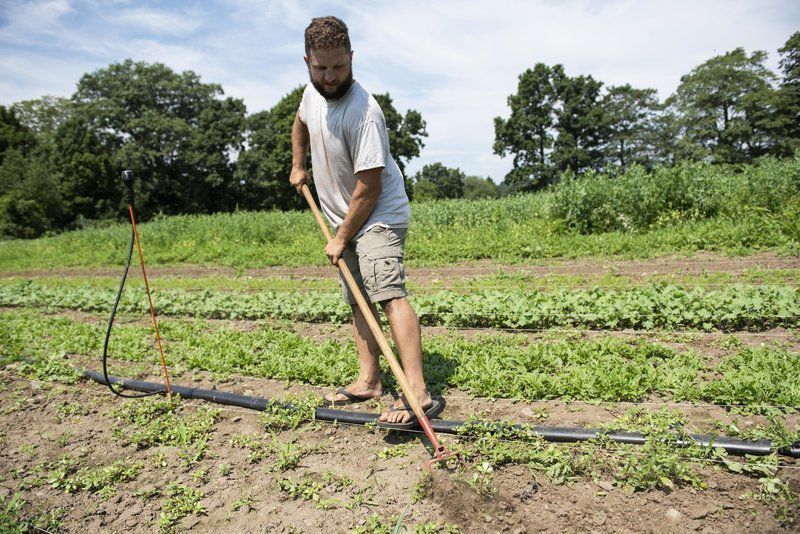 RYAN MCBRIDE/Staff photoNick Rozowky, 30, of Beverly, uses a hoe to prep the soil for planting on his incubator farm plot through the New Entry Sustainable Farming Project, a nonprofit that recently moved to Moraine Farm in Beverly. The organization provides training, land and equipment for new farmers. 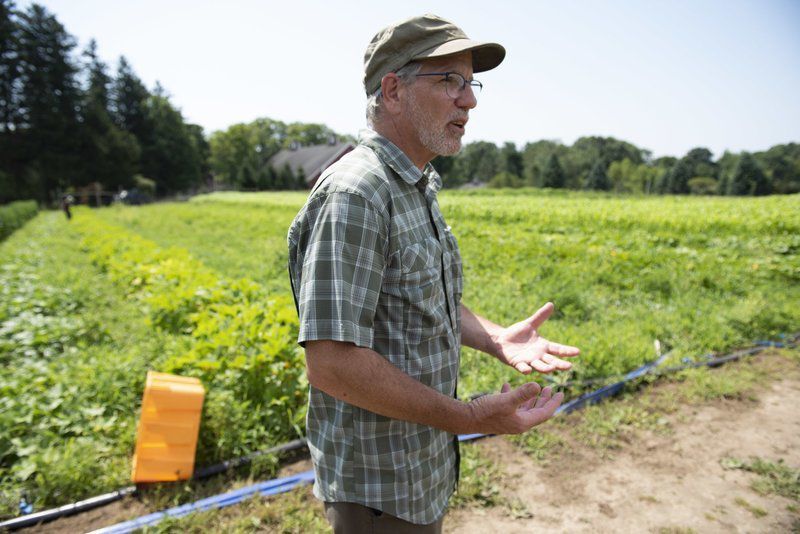 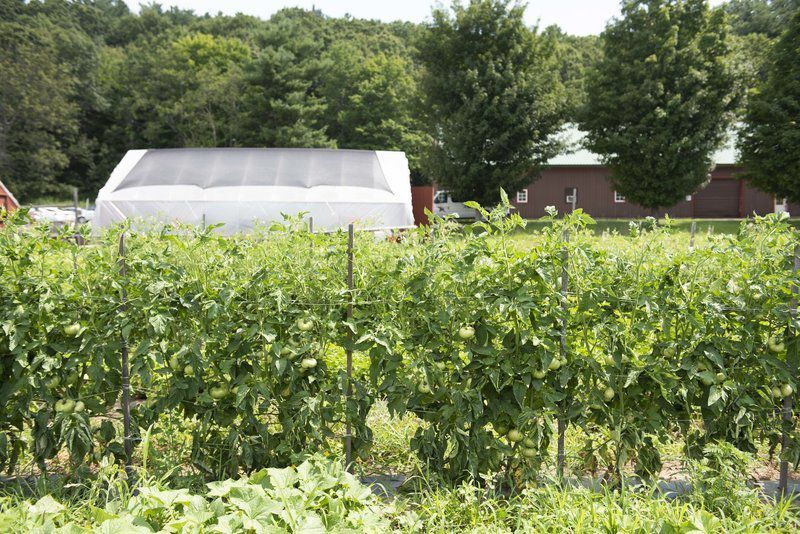 Ryan McBride/Staff photoJennifer Hashley, project director at New Entry Sustainable Farming Project, at the nonprofit's new location at Moraine Farm in Beverly. The organization has a 10-year lease with The Trustees of Reservations to occupy 15 acres of farmland there.

RYAN MCBRIDE/Staff photoNick Rozowky, 30, of Beverly, uses a hoe to prep the soil for planting on his incubator farm plot through the New Entry Sustainable Farming Project, a nonprofit that recently moved to Moraine Farm in Beverly. The organization provides training, land and equipment for new farmers.

BEVERLY — For Nick Rozowsky, tending to crops under the blaze of the hot sun pushes him one step closer to his dream of opening his own farm-to-table restaurant.

The 30-year-old Beverly resident is one of six incubator farmers at New Entry Sustainable Farming Project, a nonprofit program of the School of Nutrition and Science Policy at Tufts University.

For the next three years, Rozowsky plans to grow and harvest his own grains, root vegetables and herbs on Crown & Roots, his own farm on nearly half an acre of land at Moraine Farm in Beverly.

“It’s a crazy learning curve, but you learn as you go,” said Rozowsky, who previously worked on a farm for two years.

After completing the Farm Business Planning Course at New Entry, interested farmers can submit a business plan and apply to become an incubator farmer, like Rozowsky. Prices range from $718 for an acre of land or $180 for a quarter acre and includes access to all farming equipment.

Rozowsky has been interested in the food and restaurant industry for years and currently works two jobs in addition to farming. With New Entry’s assistance, he said the most challenging part is “finding the right time to harvest” and selling the final product.

Bill Wrinn, the nonprofit’s communications manager, said they help connect each farmer with local resources. Then, after three growing seasons, he says, “They’re off on their own.”

In March, Wrinn said New Entry signed a 10-year lease with the Trustees of Reservations to occupy 15 acres of farmland at Moraine Farm on Cabot Street.

The farm is a historic Frederick Law Olmsted property that traces back to 1880. Wrinn said John Charles Phillips, a shipping businessman living in Boston, wanted a farm for his family to enjoy. He installed a drainage system that turned the soil into 175 acres of arable land.

New Entry now shares the property with Project Adventure Inc. and the Waldorf School, in addition to private owners who live in a house on the property.

Founded in 1998 and operating out of Lowell and Dracut, New Entry initially began as a way to integrate newly arriving immigrants and refugees into Massachusetts agriculture. With demand growing, Wrinn said they expanded their reach to welcome those from all backgrounds and interests. In addition to maintaining six incubator farms, New Entry provides a free workshop through its Beginner Farmer Training Center to explain what farming entails.

Also on the property is the Food Hub, which Wrinn says is a mechanism farmers can use to access the consumer market through Community Supported Agriculture, or CSA. Funded by members, the CSA has locations around Boston and the North Shore where people sign up in advance to purchase locally sourced food straight from farmers. Wrinn said it provides incubator farmers with the financial capital they need to sustain themselves during the growing season and throughout the year.

There's also a “demo” plot of land, where Wrinn said they experiment with different kinds of organic foods, including watermelons, green beans, kale, eggplant, summer squash, cucumbers, peppers and cabbage, among others. The food is then donated to food-insecure communities and pantries in Boston and the North Shore, including Beverly Bootstraps.

Jennifer Hashley, director of New Entry, said it was always her dream to have every component of the nonprofit in one place.

“Now in Beverly, there’s a great synergy of energy,” said Hashley, who is entering her 18th season as director. She and her husband also own and operate their own poultry farm, Pete and Jen’s Backyard Birds, in Lincoln, and manage Codman Community Farms.

“We need more future farmers,” she said while walking along the dirt farm road. After changing their programming to include anyone who is interested in farming, Hashley said dozens of people signed up for classes and wanted to learn more. "It was exciting to see so much interest."

Each of the incubator farmers at New Entry hold other jobs, ranging from health care to restaurant industries. For those who are curious about owning their own farm while still having another source of income, she says now they can “almost have both and make a go of it.”

New Entry Sustainable Farming Project is hosting its annual Open Farm Tour Day from 10 a.m. to 2 p.m. on Saturday, Aug. 10, at 733 Cabot St. The public is invited to tour the farm, see the farmers’ market with the incubator farmers and sample some of the harvest.