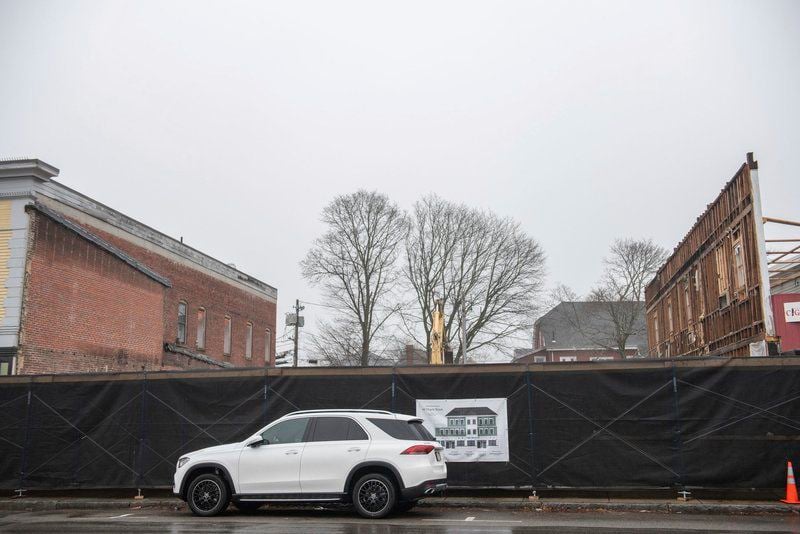 RYAN MCBRIDE/Staff photoA single wall remains of 44 Maple St., Danvers, which was torn down in order for a mixed use project at the site to be more handicapped-accessible. 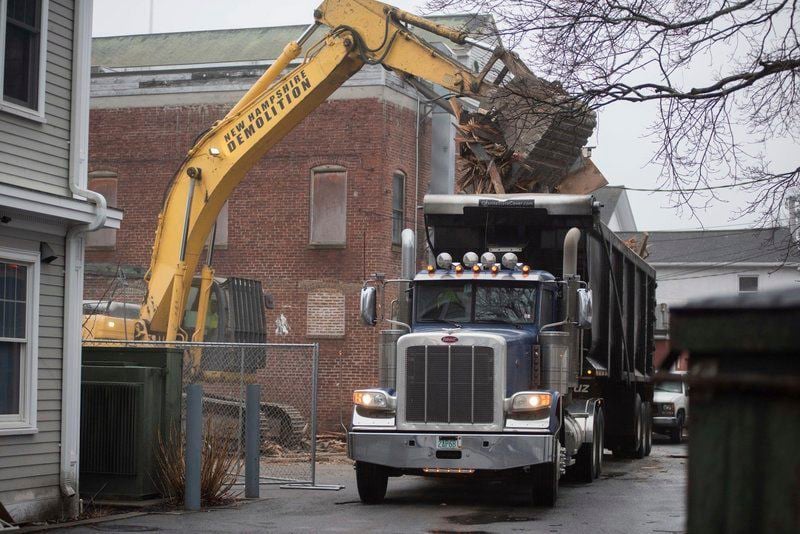 RYAN MCBRIDE/Staff photoDerbis removal continues at 44 Maple St., Danvers, where a building that was slated to be renovated has been demolished.

RYAN MCBRIDE/Staff photoA single wall remains of 44 Maple St., Danvers, which was torn down in order for a mixed use project at the site to be more handicapped-accessible.

RYAN MCBRIDE/Staff photoDerbis removal continues at 44 Maple St., Danvers, where a building that was slated to be renovated has been demolished.

DANVERS — A mixed use project to add 10 apartments on the upper floors of 44 Maple St. is moving ahead, though most of the building has been torn down to make way for a new one.

The old building had to come down to make it handicapped-accessible, Building Inspector Richard Maloney said. This way, the ground floor can be made level with the street, avoiding the need for an extensive ramp out front.

On Monday, the two-story building, where the former Goodie’s Ice Cream and Good Lickin’ ice cream parlors used to be, was torn down to the foundation. Now, only one wall is left standing. The adjacent small building, which previously housed Cigars R Us, is also empty — the smoke shop moved down to 56 Maple St.

Good Lickin’ closed in October, but its owners are in the process of moving to 480 Rantoul St. in Beverly under the name The Cotton Mill Cafe, according to the shop’s Facebook page.

Maloney said patrons used to have to walk up a couple of steps to get into the ice cream parlor.

A wheelchair-accessible ramp would have taken up half of the first floor. Instead, the developer decided to drop the building to make it even with the sidewalk.

The estimated construction value of the building was put at $1.2 million, according to the building permit on file with the town. The project is being developed by the Pasciuto family. A message was left Tuesday with the general contractor seeking comment from the developer, Nick Pasciuto. An email seeking further comment was not replied to as of deadline.

An Aug. 9, 2019, letter from Engineering Planning and Management Inc. of Framingham to Maloney states “the project is a new 4-story mixed use building.” According to the letter, the building would be about 35 feet tall, and the fourth floor would be used for storage that would not be accessible to residents.

Maloney said town officials were not surprised that much of the building had to be demolished, because staging for the demolition had to be set up on town property.

“We knew, before the end of last summer, the building was coming down to street level,” Maloney said.

One of the 10 apartments will be affordable.

The new building will also have a new steel superstructure and huge footings so that it does not undermine the walls of buildings on either side of it, Maloney said.

Even if the developer had tried to add on to the existing building, not much of it would have been left, Maloney said.

The former commercial building at 44 Maple St., had two floors and a flat roof. It appeared to date back to the turn of the 20th century, as Maloney said the construction with a rubble foundation indicated this to be the case.

The building at that location once had a mansard roof with dormers and a height of 40 feet, according a picture Town Archivist Richard Trask located for the owners. The photo is on file with the Zoning Board of Appeals, along with the project plans.

The top two floors were removed after a fire in the 1920s and the building was remodeled, Maloney said.

Last year, Town Manager Steve Bartha raised some concerns to the zoning board about the timing and the precedent-setting nature of the project when it was proposed.

At the same time, the Planning Board and town planning staff were working on an effort to rezone the downtown to allow for a mix of commercial and residential uses with a comprehensive set of design guidelines and regulations for height, parking and other requirements. Special Town Meeting Monday night approved the rezoning.

Before that, residential units were prohibited in the commercially-zoned downtown. But there was precedent for mixed use there, as the zoning board granted a variance in 2006 to allow residences on the second floor of the adjacent 50 Maple St. building, which the Pasciuto family also owns.

In March 2018, the Zoning Board of Appeals voted 4-1 to grant a variance to allow the project to move ahead.

“What is going to get built there is pretty nice,” Bartha said. “It’s a good representation of what the new zoning anticipates.”