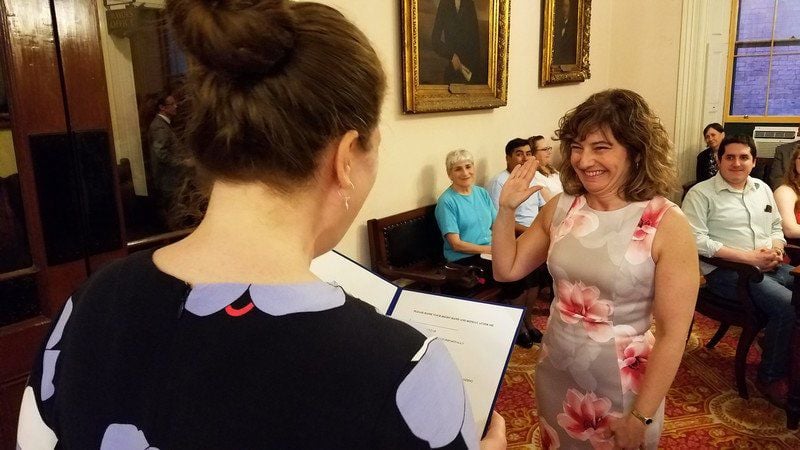 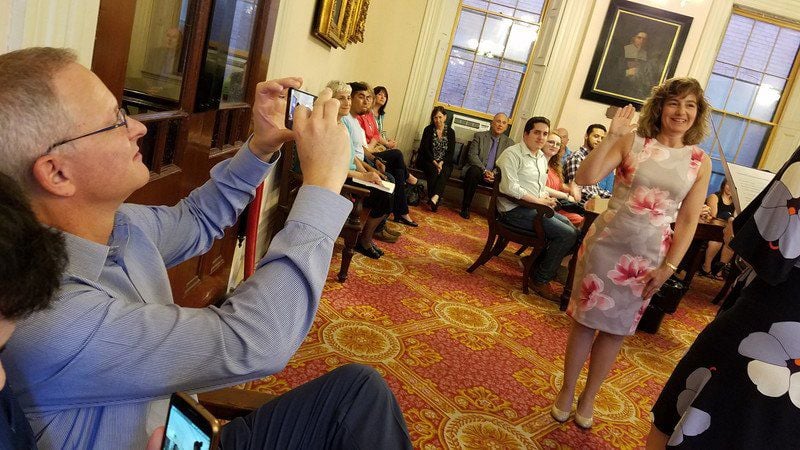 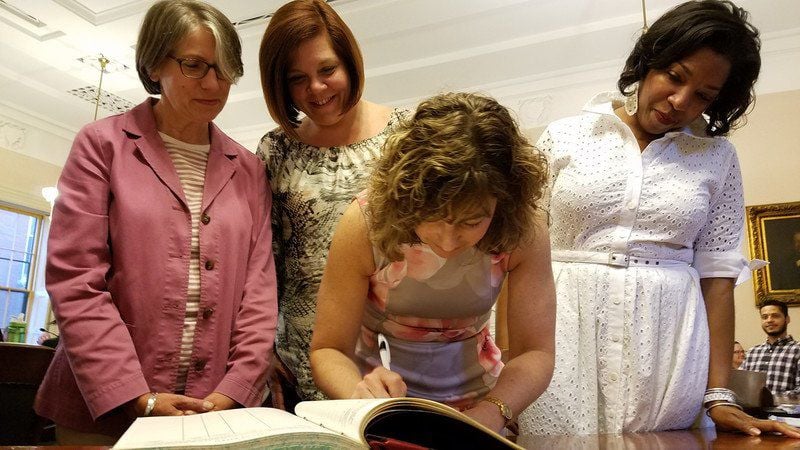 SALEM — Thirty-one years ago, City Planner Gerry Kavanaugh had to write a recommendation for a young, college-bound resident who worked countless school vacations in the planning office during her high school years.

“Ilene Talkowsky is one of the most effective and hard working individuals which this office has ever had in its employment,” Kavanaugh wrote in a 1987 letter to Ithaca College. “If Ilene Talkowsky were ever interested in working for the Salem Planning Department on a permanent, full-time basis, you can be assured that a position would be made available for her.”

Talkowsky would never return to the city’s planning department. Instead, under the married name Ilene Simons, she became Salem’s seventh city clerk, a position she was appointed to by the City Council this week.

She was sworn in on Thursday. The City Council set the 52-year-old Salem resident’s salary at $94,676.

Several members of Simons’ family were on-hand for the swearing-in, including her sister, Ellen Talkowsky, who is the city’s special projects coordinator.

“We’d be twins if she grew 2 inches, colored her hair black and gained 100 pounds,” Talkowsky joked. “The more you look at us, you can really tell we are sisters.”

Simons studied business and psychology at Ithaca, and went to work in human resources at Filene’s Basement, Raytheon and other companies. In 2000, she returned to City Hall as an election supervisor, assistant register and senior clerk.

The city’s fifth clerk, Debbie Burkinshaw, had picked Simons from a pile of resumes.

“No one knew who she was,” Talkowsky said, pointing to Simons’ last name. “Debbie Burkinshaw walked to Human Resources with the resumes and said, ‘The only one I want to talk to is this one right here.’”

Burkinshaw left her position abruptly in 2003 due to illness, and died five months later, after a devastating cancer diagnosis. The city clerk’s main office — Room No. 1 — is named in her honor today.

Cheryl LaPointe was tapped to fill Burkinshaw’s shoes, and within a year she promoted Simons to be her assistant clerk.

“We were in dire straights because so much had happened in such a short time,” LaPointe said Friday, sitting at her old desk in Room No. 1. “I sought her out and sat with her and asked her if she was willing to become assistant, because I knew how her work was — it was impeccable.”

Simons worked as the assistant clerk for 13 years, until LaPointe retired in March, then filled in as interim city clerk until her appointment this week as the permanent city clerk.

Now, with the department under her guidance, Simons is looking to the future.

Already, the department has fired up an online payment process for vital records, something never offered in Salem before. They have seen more than 50 transactions for birth, death and marriage certificates in just a couple weeks.

Simons wants to improve the way the city runs elections. That starts with voter verification through electronic “poll pads,” something being tested for early voting in elections this year. The department will also be holding a mock election to train staff and volunteers, as well as voter registration and education sessions.

This might come as a relief to Latino voters in Salem, after groups sounded alarms about voters facing harassment at the polls a couple of years ago. Voter participation, Simons said, is one of her biggest priorities.

Simons also wants to make sure the upcoming census in 2020 is as accurate as possible, particularly in quantifying Salem’s voter demographics. The city falls just shy of having a large enough Latino population to meet requirements to get ballots printed in Spanish.

Simons said she wants to look into other ways to try to get bilingual ballots, but the surefire way would be through the census.

“In order to get to the right percentage,” Simons said, “(residents) really need to fill out the federal census so they can get the numbers for Spanish ballots.”