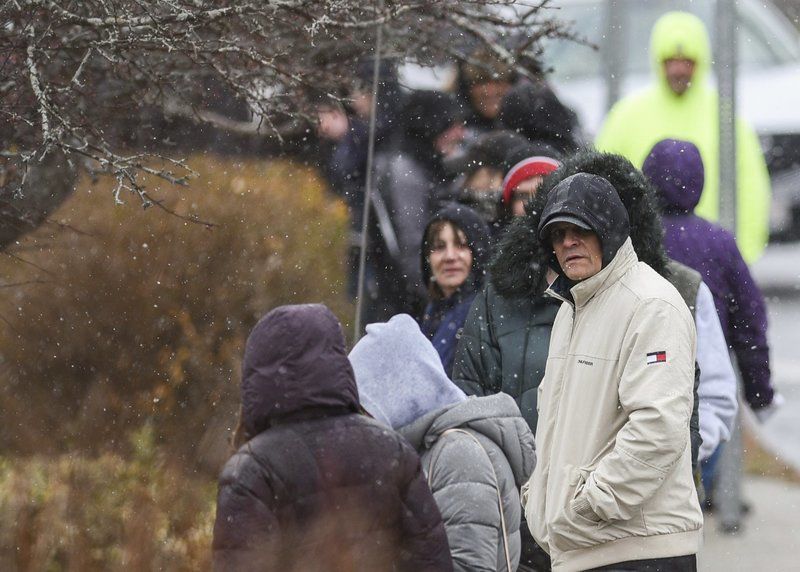 JAIME CAMPOS/Staff photoA line forms around the block on Grove Street in Salem, outside Alternative Therapies Group, on Monday as people do some last-minute shopping at the retail marijuana dispensary. On Monday, Gov. Charlie Baker ordered that all non-essential businesses close, which would include retail dispensaries like ATG. Sales of medical marijuana can continue, however. 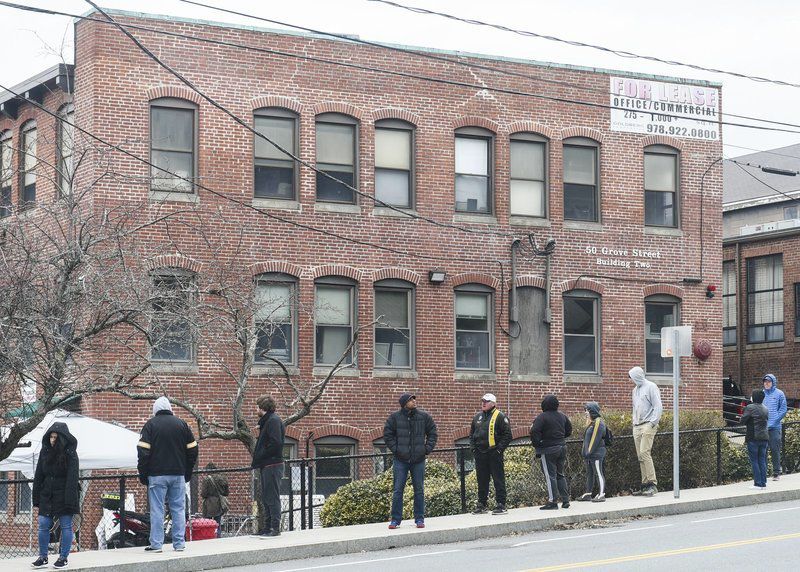 A line around the block forms along Grove Street, Salem, as people do some retail pot "panic buying" at the Alternative Therapies Group (ATG) in Salem. On Monday, Gov. Charlie Baker has ordered that all non-essential businesses close, which would include retail dispensaries. JAIME CAMPOS/Staff photo 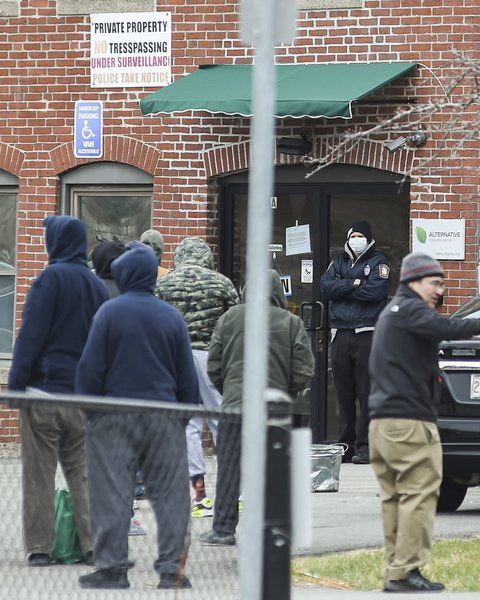 A line around the block forms along Grove Street, Salem as people wait outside at the Alternative Therapies Group (ATG) in Salem. JAIME CAMPOS/Staff photo

JAIME CAMPOS/Staff photoA line forms around the block on Grove Street in Salem, outside Alternative Therapies Group, on Monday as people do some last-minute shopping at the retail marijuana dispensary. On Monday, Gov. Charlie Baker ordered that all non-essential businesses close, which would include retail dispensaries like ATG. Sales of medical marijuana can continue, however.

A line around the block forms along Grove Street, Salem, as people do some retail pot "panic buying" at the Alternative Therapies Group (ATG) in Salem. On Monday, Gov. Charlie Baker has ordered that all non-essential businesses close, which would include retail dispensaries. JAIME CAMPOS/Staff photo

A line around the block forms along Grove Street, Salem as people wait outside at the Alternative Therapies Group (ATG) in Salem. JAIME CAMPOS/Staff photo

PEABODY — Evans Flowers in Peabody had closed its doors to walk-in customers last week, but like many businesses was still making deliveries in an attempt to keep going during the coronavirus pandemic.

On Monday, even that last-ditch attempt at staying open came to a close.

Gov. Charlie Baker's announcement that all non-essential businesses must close meant that Evans Flowers has to stop deliveries as well. It was the latest, if understandable, blow to businesses on the North Shore and around the state that had already suffered greatly over the last couple of weeks.

Melissa Cantin of of Evans Flowers said the business had experienced sizable losses due to weddings and showers being canceled and funerals being put off.

"We were doing quite a few for people who can't see their families," for birthdays or other events, said Cantin. "Now we're going to lose out on that as well ... it's definitely going to be a major hit."

The shop had taken a big order on Monday morning. But with the business closing at 3 p.m. and unable to re-open, workers were assembling bouquets and arrangements to donate to hospitals, nursing homes, police and fire stations, and a few restaurants that they knew were open for takeout.

Cantin said her family owns not only the business but the physical location, so they're not facing the prospect of a rent payment due. And the business is long-established on the North Shore.

"Thankfully we own our property, so we're definitely in a better situation than a lot of other businesses. We definitely know a couple of businesses that won't survive," said Cantin, who just read about a rose grower in California that is going out of business after 200 years due to the situation.

She is also part of an online community where members are looking for answers about things like whether business insurance policies will cover some of the losses.

Baker's order also means that Insa, a recreational marijuana dispensary in Salem, must close by noon on Tuesday. Co-owner Steve Reilly said he's hoping the delay will be short.

"We look forward to resuming what we see as an essential service to the community in the near future," Reilly said in an email.

Recreational pot sales will also end at ATG, a hybrid recreational and medical dispensary on Grove Street in Salem. The company's medical sales will still open for medical card holders only, according to Chris Edwards, the company's CEO. On Monday, a long line formed around the block outside ATG.

New Brother's in Danvers, one of the North Shore's most popular restaurants, closed temporarily on Monday. Owner Kary Andrinopoulos tried to offer take-out only, but did not have enough customers to justify staying open right now.

"I am very grateful to all of my loyal customers, and I will reopen as soon as possible," he said. "Maybe in a week or so; we'll see. I do know we'll all get through this together. I am sure of that."

Another Danvers business, Cakes for Occasions bakery, will be able to stay open by offering sweet treats by pickup or curbside delivery, but it won't be the formal gourmet wedding cakes and creations for special occasions its known for.

"Oh yeah," owner Kelly Delaney of Danvers said. "We are going to be able to continue."

There is no question the hospitality industry has been devastated by the outbreak of the coronavirus. Their wedding business has been hit hard by weddings that are being postponed, with some brides hopeful they will be able to have a wedding in May or June.

Some brides are postponing their nuptials until 2021.

The business has been hit hard from the loss of sales of cakes and treats to the region's private schools, which have closed down, and which use the bakery because it's nut-free. They also used to supply area hotels and local caterers, but all this business has also dried up. They are in danger now of losing their Easter business, which is the start of the baker's busy season.

Amid all this, they have had to lay off 23 people, Delaney said. She and her husband, Frank, have been working hard, trying to bring back people one at a time as they have completely changed the bakery's business plan and put the custom cakes on pause.

For those feeling slightly stir crazy, they are doing small cakes, desserts for two, an assortment of pastries called "The Good Old Days," and cannoli decorating kits.

"That's all anyone wants right now," Delaney said. "We'll stay in this lane as long as we need to."

For Atomic Cafe in Beverly, Baker's announcement didn't change much because it had already closed on Saturday.

"We just felt it was the responsible thing to do for our staff, for our long-standing supportive customers and for the community in general," Atomic Cafe co-owner John Mahoney said. "The quicker we all get 100 percent compliant on the governor's orders, the quicker we can try to recover and figure out what's on the other side."

Mahoney said his business is fortunate in that the grocery stores that carry Atomic's coffee are still open. Customers can also order online from Atomic Coffee Roasters and have it shipped to their house.

Whatever happens, Mahoney said Atomic Cafe will re-open whenever businesses are given the go-ahead.

In Salem, Lobster Shanty owner Diane Wolf said she did not know what the long-term impact will be on her business. The restaurant is seasonal and has been closed anyway. Wolf was planning to open on April 1 but now that obviously will not happen.

Wolf said she saves up during the busy season in order to get through the 10 weeks when her business is closed, "but any safety net we had in January is already gone," she said.

"I'm not sure what the future will bring," said Wolf.

Staff writer Paul Leighton can be reached at 978-338-2535 or pleighton@salemnews.com. Staff writers Julie Manganis, Ethan Forman and Dustin Luca contributed to this story.