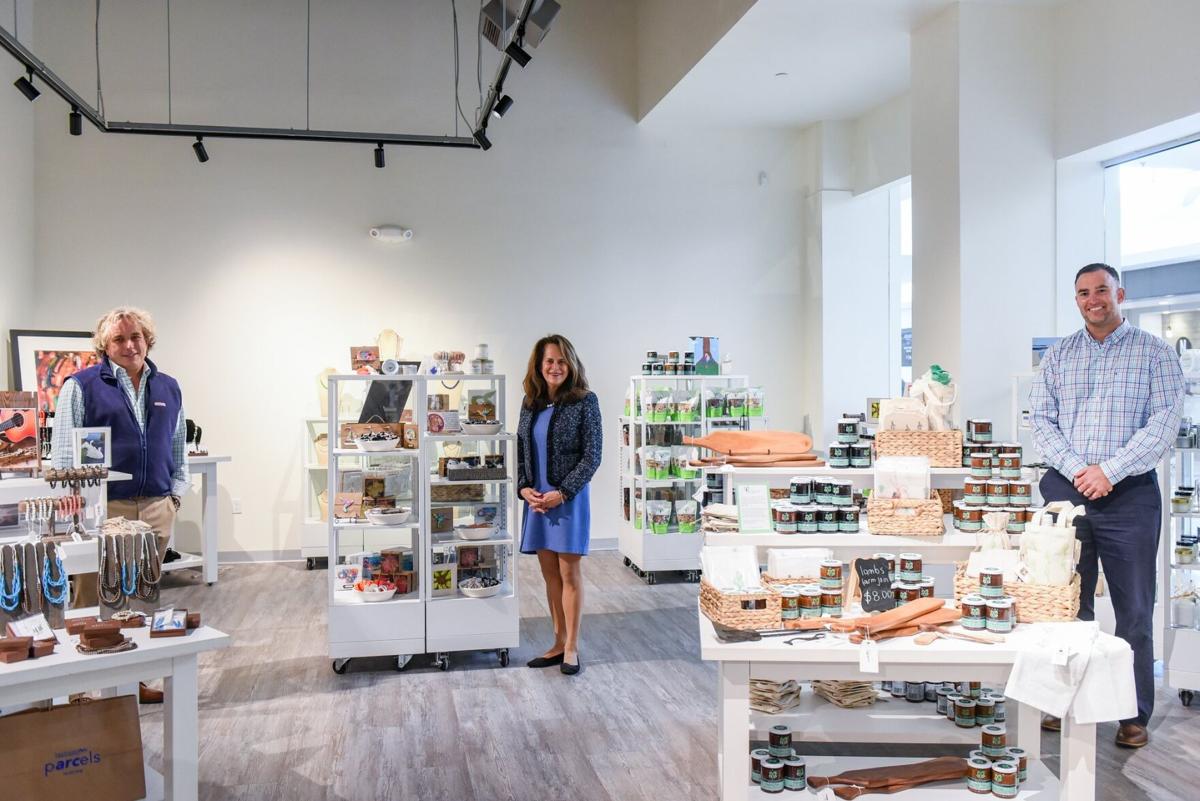 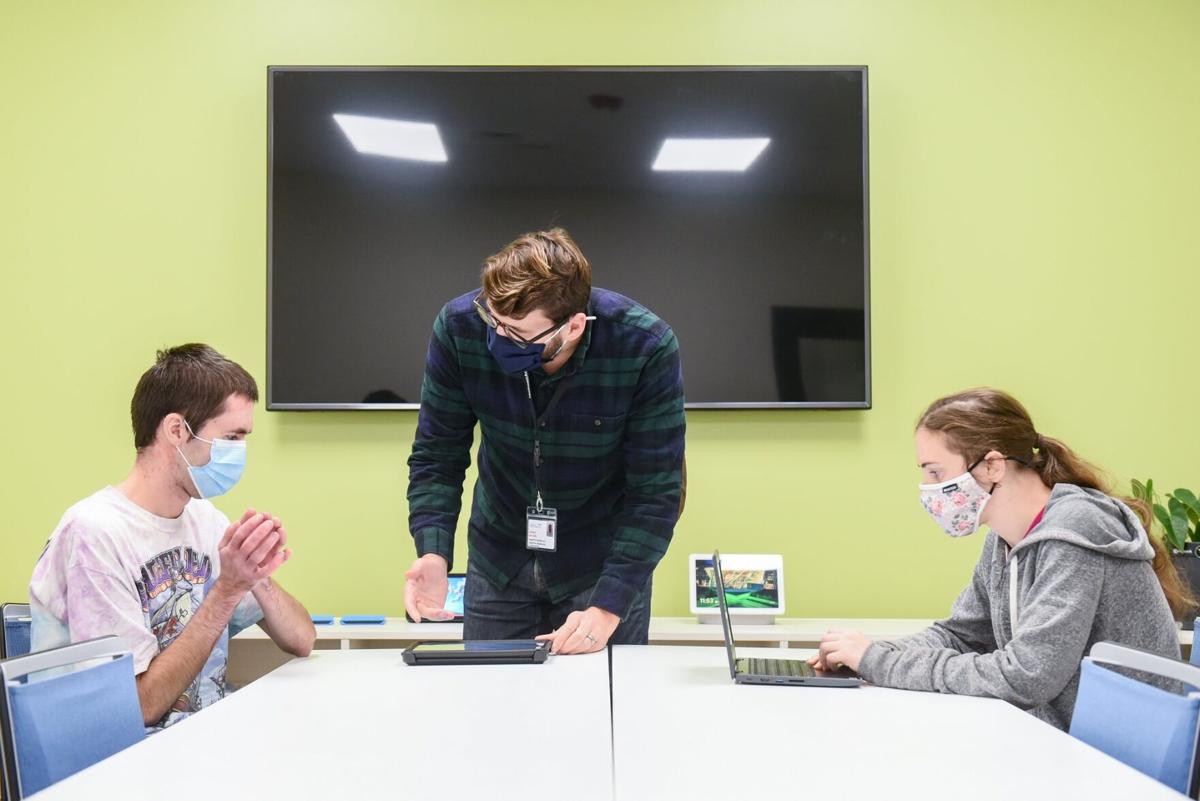 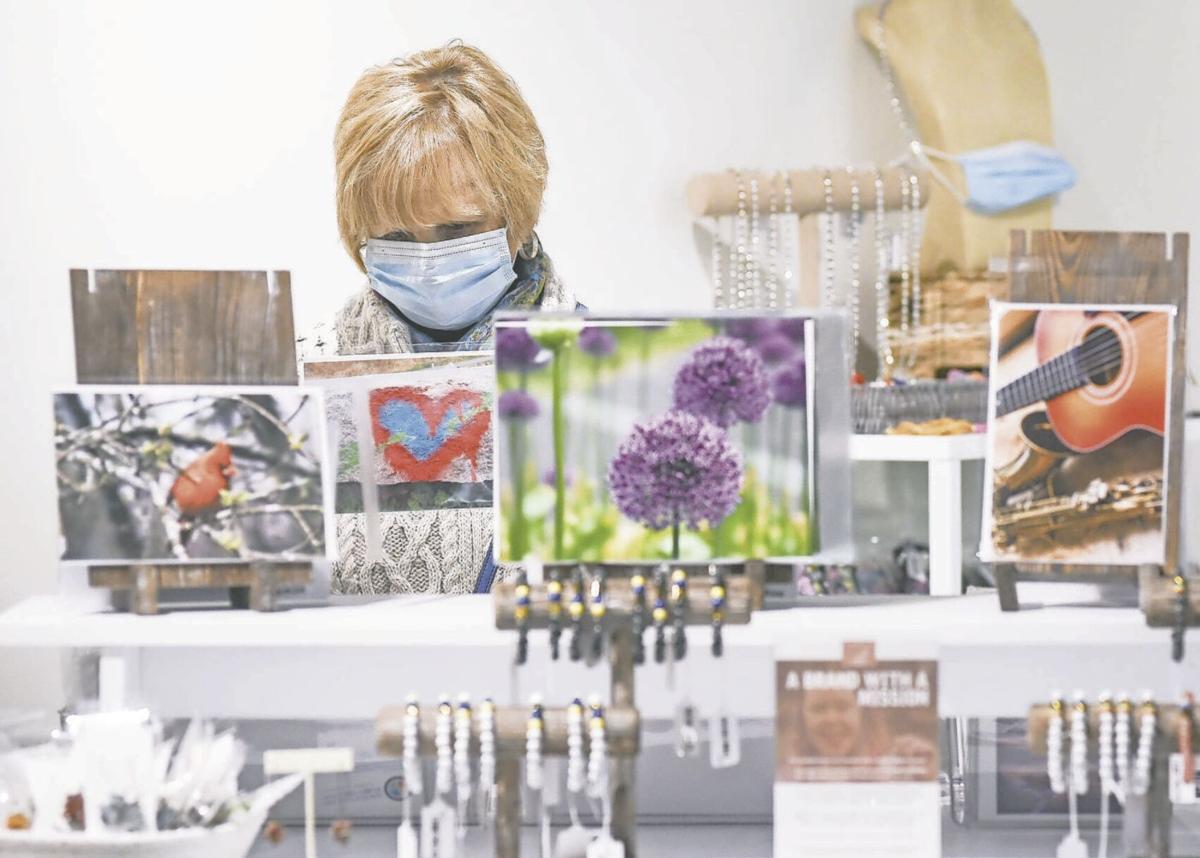 Anne Denaro of Peabody looks at various postcards at the Northeast Arc's Parcels store in Danvers amid the coronavirus pandemic. JAIME CAMPOS/Staff photo

Anne Denaro of Peabody looks at various postcards at the Northeast Arc's Parcels store in Danvers amid the coronavirus pandemic. JAIME CAMPOS/Staff photo

DANVERS — One of the best parts of the Northeast Arc’s new “center for linking lives” is its location at Liberty Tree Mall, said Chris Stark, a 30-year-old from Wakefield who receives employment training from the organization.

Stark said he loves the opportunity to walk around the mall and meet people, and he loves that there are so many great restaurant options available for lunch — Panera Bread, Regina’s Pizza, Buffalo Wild Wings, to name a few.

“I wish I had a job here, like at Buffalo Wild Wings,” Chris said. ‘“I did have experience at Breaking Grounds (in Peabody) and Flatbreads (in Salem). I could do the same thing here. Maybe that can be the next step for me.”

The Northeast Arc, a nonprofit organization that serves children and adults with disabilities, opened up the center for linking lives earlier this month. Director of Innovation and Strategy Tim Brown said one of the many advantages to opening the center at the mall is the close proximity to restaurants and other businesses with which the organization hopes to build relationships.

Some businesses in the mall, like Panera Bread, have already hired people in Arc employment programs in the past, he said.

The mall’s location is significant, Brown said, for a variety of reasons, but almost all of them can be boiled down to two words: Accessibility and inclusion.

“A lot of these programs are programs that families may access or individuals with disabilities or autism may access on a regular and ongoing basis,” he said. “By moving into the mall, we opened up transportation options for people because most major bus lines from every community land at the mall. From our other locations, public transportation was always a challenge, so relocating those services to the mall allows families and people to access services much easier.”

Brown also pointed out that the mall location allows many of the services Arc provides to be located in the same building. The organization plans to close three of its locations, at 64 Holten St., 5 Electronics Ave., and 149 Sylvan St., in Danvers, along with space at 81 Main St. in Peabody. The headquarters are located on Southside Road in Danvers.

“A family member can come in to talk to a service program, but they might also be eligible for other services and all those services are now located together,” he said. “So we’re not shuffling people from building to building. Were all in one central location.”

“Why do we have that disparity in terms of where people with disabilities should be working in and living in and creating in and learning in and playing in? We want to embrace the best,” she said, adding that she wants the center to be a place where Arc employees and people who receive services from Arc can collaborate and share space.

“We want it so that people with disabilities are not segregated to ‘this is their space and that’s our space,’” she said. “There’s a collective our space.”

Simons said a good example of a shared space is the kitchen where Arc employees can make and eat lunch, and also where a person receiving services can learn to use cooking equipment and how to be more independent in the kitchen.

In addition to being collaborative, Brown and Simons said much of the space can be adapted for different uses.

Ralph James, a volunteer and co-chair of one of the Arc’s campaigns, said the adaptability of the space is “huge.”

“The flexibility part is a key concept, because if you think about even a few years ago how young people and people with disabilities were treated and how they were included or not included, it’s night and day between then and now,” he said. “This is an innovative organization, and what we do five years from now will be different than today, so we have to have space adaptive.”

Some other highlights of the space include a technology lab where individuals can learn about and try different technologies that might help them live on their own or be more independent, small meeting rooms where they can meet with speech or occupational therapists or have mock interviews to prepare for meetings with potential employers, group spaces where social and professional programs can be held, and a 1,000-square-foot storefront that sells products exclusively made by people with disabilities or by companies owned by people with disabilities.

“I think it’s great that it opens the eyes of the general public to the skills and abilities of people of all abilities,” said Brown, referring to the store Parcels. “When they come in and look at hand torched ironwork, and then they hear the story of the gentlemen behind it, it’s opening up what peoples’ thought process is and introducing all these products to this region.”

Stark said he has been really happy to start spending time at the new mall location, especially because being at home so much during the pandemic has been very difficult for him.

“I like the new space,” he said, adding that his favorite part is that he can now see some of his friends again.

Due to the pandemic, the new space is laid out in a way that allows for social distancing and proper pandemic protocol, but Stark said he is excited about when he is allowed to use the game room and play Wii Bowling with his friends.