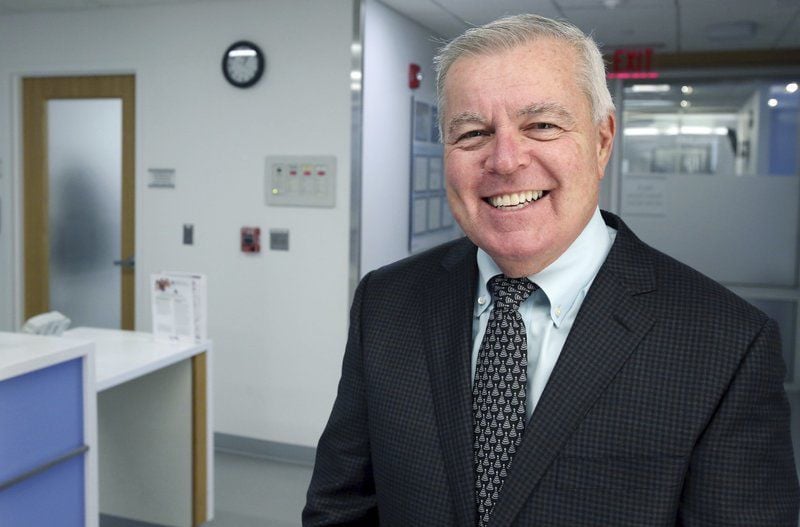 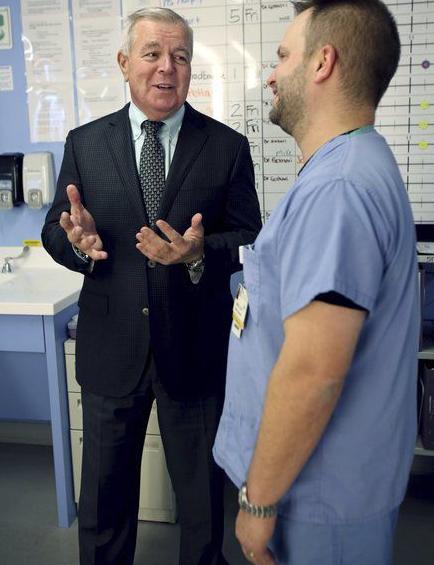 SALEM — Crews and excavators were feverishly working this past Thursday on a ledge-filled lot adjacent to the emergency department of Salem Hospital.

Just before 2 p.m., a blast shook the hospital and the smell of smoke filled the air.

The blasting was part of work to build a driveway around the side and back of the campus to the Jefferson Avenue side of North Shore Medical Center where a $200 million hospital expansion will be built over the next three years. The expansion will include a new emergency department and new inpatient beds.

This project will be a lasting legacy of outgoing North Shore Medical Center President Robert G. Norton, who retired on Friday, after 15 years leading the largest health care provider on the North Shore.

The expansion project is “well underway,” said Norton, noting the medical center received final approval from the Salem City Council earlier this month. The project includes a new three-story building with two new inpatient floors. The former Spaulding Rehabilitation Hospital on campus will be turned into a mental health center.

“I hope to come back in a few short years and participate in the ribbon cutting,” said the 66-year-old Manchester-by-the-Sea resident. No decision has been made yet on his replacement, he said, although an announcement could come next month.

The project will also consolidate the Union Hospital campus in Lynn with the one along Highland Avenue.

Both hospital campuses sit less than 6 miles apart, meaning North Shore Medical Center is operating two hospitals at a time when more and more treatments are being performed on an outpatient basis. There has been push-back, however, from leaders in Lynn on the eventual closure of the Union campus.

“The core driver of that change was to produce a better care model for people out into the future,” Norton said. As medicine becomes more specialized, he said, it would be best to aggregate staff in one campus instead of two.

“It was an interesting process, of course, getting to the approval of the project. And, I think by the end of our walkthrough of that process, people understood better what we were trying to do.”

But more importantly than this building project, Norton said, he hopes his legacy is the two core values he has tried to instill at NSMC.

The first: Every decision the organization makes is in the interests of patients and families.

“That sounds a little trite at times, but it’s not always easy to do in this complicated world that we live in, but at the end of the day, that’s the business we are in, and I think we have instilled that culture in the organization where people really do now think about the care we deliver and its impact on families and neighbors and friends,” Norton said.

The second core value “is the clinical quality of what we do, making sure that every encounter we have is at the very highest clinical quality standard,” he said. “So, we have focused on quality improvement at every turn.”

Among its many accolades, in August, U.S. News & World Report ranked North Shore Medical Center as one of the best hospitals in the Boston area and in Massachusetts.

Norton ran one of the region’s largest health care providers and major employers. North Shore Medical Center, which was absorbed into Partners HealthCare in 1996, says it had 4,700 employees, a medical staff of 600 and 394 beds in 2015.

“He elevated the game there,” said Salem Mayor Kim Driscoll, adding that under Norton’s leadership, what many still refer to as Salem Hospital has provided high quality care. Driscoll said Norton has built strong relationships with the region’s community health centers.

“He wanted to make sure there was strong care there as well,” she said.

Norton is retiring from a job in which his salary in 2015 was $736,226, although his total earnings for that year eclipsed $1 million once more than $300,000 in deferred compensation was factored in, according to records with the state Attorney General’s Office’s division on nonprofit organizations.

Norton has had a long career in health care.

He came to NSMC after serving as CEO of Shands Jacksonville Medical Center. He was there for about five years before the Rhode Island native got the call in the fall of 2001 to come back to New England.

“It was the right time for me and this opportunity seemed like a great opportunity,” he said. Norton had worked at the New England Deaconess Hospital before the merger with Beth Israel Hospital in 1996. He worked at the merged institution before heading to Florida.

There have been challenges in recent years.

The expansion in Salem has been scaled back and the hospital suffered a loss of $36 million in fiscal 2015; it has reportedly been losing about $30 million for the past several years, with much of that loss due to treatment of low-income Medicaid patients.

“The economic challenges at North Shore have been substantial, no question about that,” Norton said. Hospitals have to balance their mission and margins, he said, and NSMC serves everyone who comes through the door, regardless of their ability to pay.

The core problem for the hospital and others in the state is reimbursements from Medicaid, the state health care coverage program, “is significantly less than our cost of providing that care,” Norton said.

Norton is also known as someone who works with the community.

Driscoll said Norton’s legacy includes being active with the Salem Partnership and the North Shore Chamber of Commerce.

“I think that Bob Norton is one of the finest hospital presidents I have ever met and have ever gotten a chance to work with,” said Robert Bradford, president of the North Shore Chamber of Commerce.

“At the end of the day,” Norton said, “institutions like the North Shore Medical Center are part of a community infrastructure that all has to work together to address the many, many issues that we have in the communities we serve.”