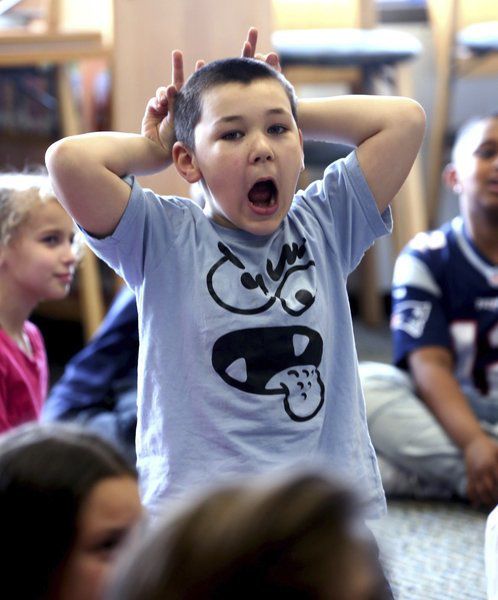 KEN YUSZKUS / Staff PhotoCamden Cohen tries to do a "bunny breath" during breathing exercises at Carlton Innovation School this past week. To prepare for the MCAS testing, students at Carlton were being innovative: by doing yoga. 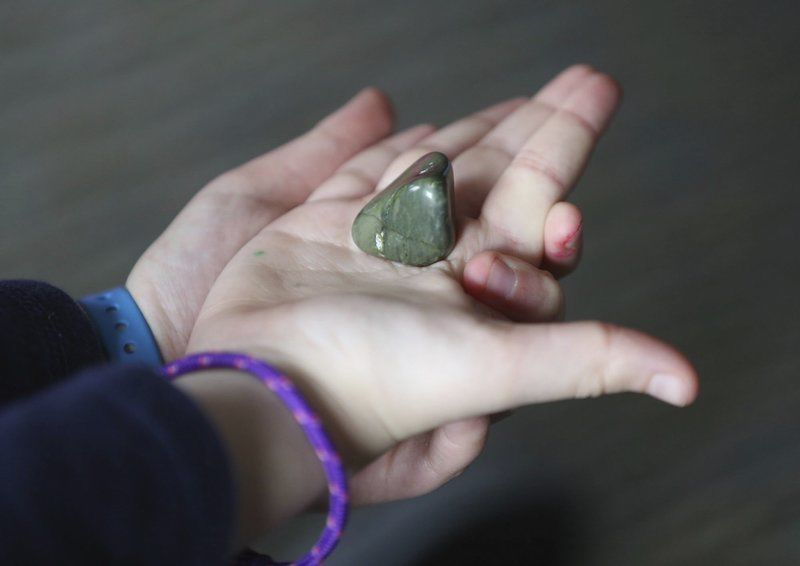 KEN YUSZKUS / Staff PhotoOne of the "worry stones" given to the students. 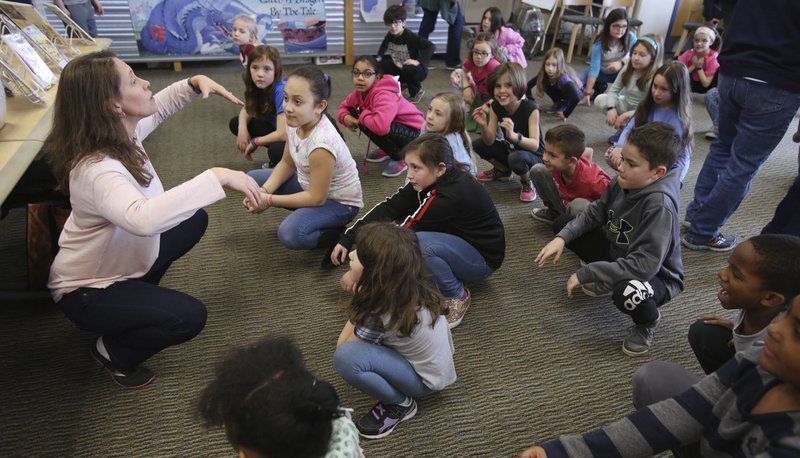 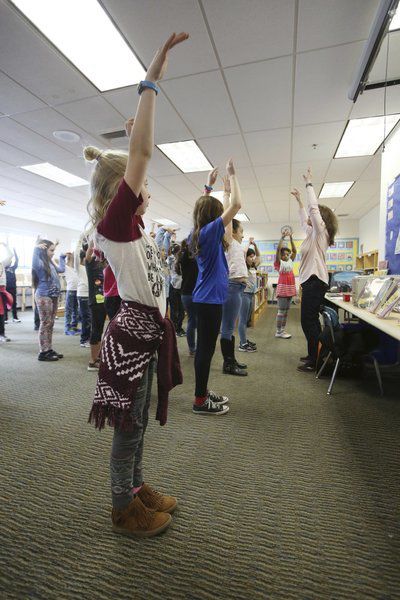 KEN YUSZKUS / Staff PhotoTo prepare for the MCAS testing, students at Carlton Innovation School were being innovative: by doing yoga. 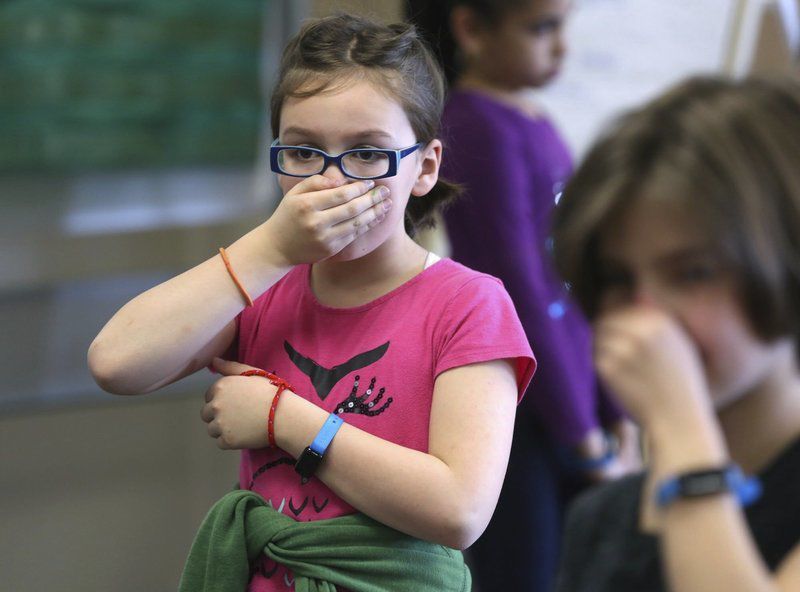 KEN YUSZKUS / Staff Photo.  Katie Craig does breathing exercises at Carlton Innovation, which prepared for MCAS testing by putting all students through yoga lessons as part of "Wacky Wednesday" this week.

KEN YUSZKUS / Staff PhotoCamden Cohen tries to do a "bunny breath" during breathing exercises at Carlton Innovation School this past week. To prepare for the MCAS testing, students at Carlton were being innovative: by doing yoga.

KEN YUSZKUS / Staff PhotoOne of the "worry stones" given to the students.

KEN YUSZKUS / Staff PhotoTo prepare for the MCAS testing, students at Carlton Innovation School were being innovative: by doing yoga.

KEN YUSZKUS / Staff Photo.  Katie Craig does breathing exercises at Carlton Innovation, which prepared for MCAS testing by putting all students through yoga lessons as part of "Wacky Wednesday" this week.

SALEM — With students in the throes of standardized testing starting Monday, Carlton Innovation School is getting a little creative about helping kids handle the pressure.

The 239-student elementary school spent Wednesday introducing students to yoga — an effort to help the kids navigate the emotional and stressful challenges of MCAS testing and, to a greater extent, life outside of the classroom.

The school partnered with the Mind Body Studio at the Salem YMCA to teach breathing exercises and relaxation techniques to all Carlton students and staff.

“We don’t do test prep all year, and this past week, we have been. We noticed kids were getting kind of uptight and stressed out,” said Bethann Jellison, the school’s principal. “So we’re trying to de-stress them and get them to relax so they’re able to do the best they can next week.”

The exercises, carried out in the school’s library, were part of “Wacky Wednesday,” a weekly daylong theme the school uses to spice things up at Carlton.

“The kids at Carlton have special activities where they do anything from rhythmic dance to working on computers,” said school behavior specialist Patty Levasseur. “The specialists — music, art, gym and science teachers — were talking about doing some meditation programs with the kids.”

“When kids have anxiety, or it’s escalated where they can’t be talked to or are just having the toughest day, you can tell with their breathing and how they’re feeling. They’re breathing fast. Their heart’s racing,” Levasseur said. “I do a lot of techniques with them, try to teach them to breathe through their nose and try to calm themselves down.”

With the school diving into MCAS testing, that led the school to reach out to the Salem Y and bring in Jori Everitt, coordinator of the Mind Body Studio.

“Most of the time, in school, they’re learning things externally from themselves — math, writing, science, all the wonderful things they learn in school,” Everitt said. “With this, they actually take a few moments to learn about themselves, which is incredibly empowering and something we don’t often, even as adults, take the time to do.”

Everitt’s program taught the students about stress and, central to everything else, how to become aware of it. From there, they were brought through a half-dozen breathing exercises and eventually given “worry stones” — a small, smooth stone that fits in a students’ hand — to take with them to class.

Some might see the stones as a distraction for students sitting at a desk. That, it turns out, is the point.

“That stone will be able to serve as a reminder and de-stresser,” Jellison said. “We find, with things in their hand, they forget about the other things, and it bring them back to what’s at hand.”

In fact, the worry stone just replaces other in-school tools, in some cases.

“We have stress balls, all kinds of gadgets kids use on a daily basis to help them stay focused,” Jellison said, “and this is just another mechanism we’re using.”

With the schools thrown into nine days of testing, it’ll be tough to see whether the exercises worked. But the tools aren’t designed to be exclusive to when students hold number 2 pencils.

“It’s something we’re going to have for them and use with them,” Jellison said. “This isn’t just an MCAS thing.”

While some teachers often try all kinds of things to help students individually or class by class, Carlton represents the first school in Salem to put every student through yoga, according to Kelley Rice, district spokeswoman.

“There are a ton of studies showing how, especially kids of this age, they can take these things and apply them more so than adults,” Rice said. “Kids can really take the techniques and use them.”

Levasseur was particularly surprised with how some of the school’s students — ones who were the most unenthusiastic about the program — reacted to the exercise.

“I watched especially the older kids, the boys, and they were phenomenal this morning. They really took it to heart,” she said. “I was really proud of some of our tougher kids who didn’t want to participate. They’re all getting into it.”