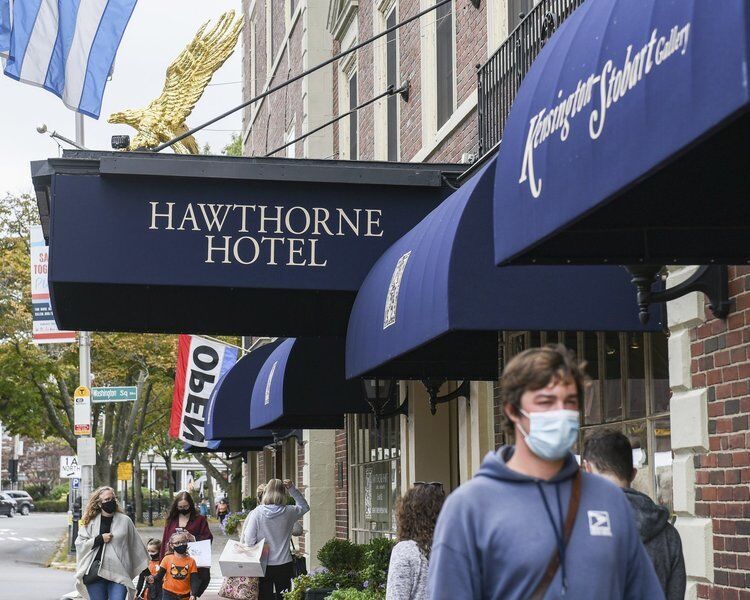 JAIME CAMPOS/Staff photoPeople walk along the sidewalk outside the Hawthorne Hotel Monday as Salem prepares for Halloween amid the coronavirus pandemic. For the first time in years, the hotel is not fully booked for Halloween, due to COVID-19. 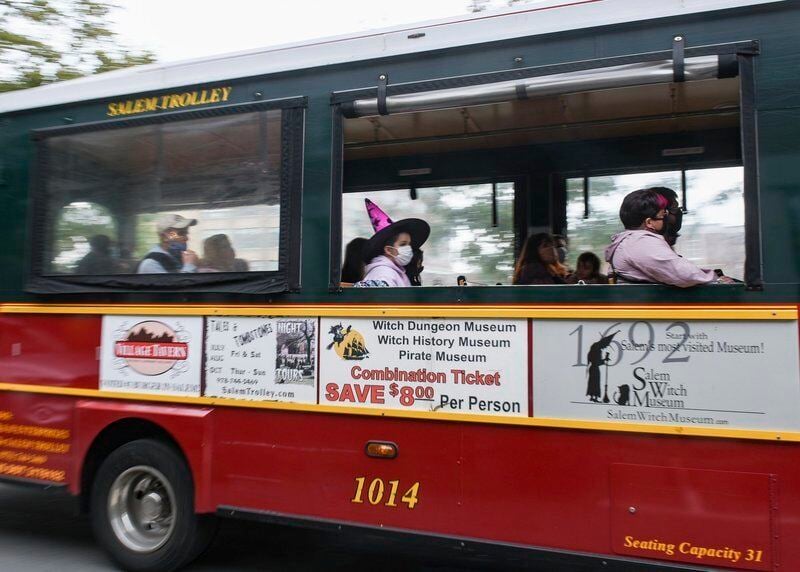 Passengers are aboard a Salem Trolley on Monday. 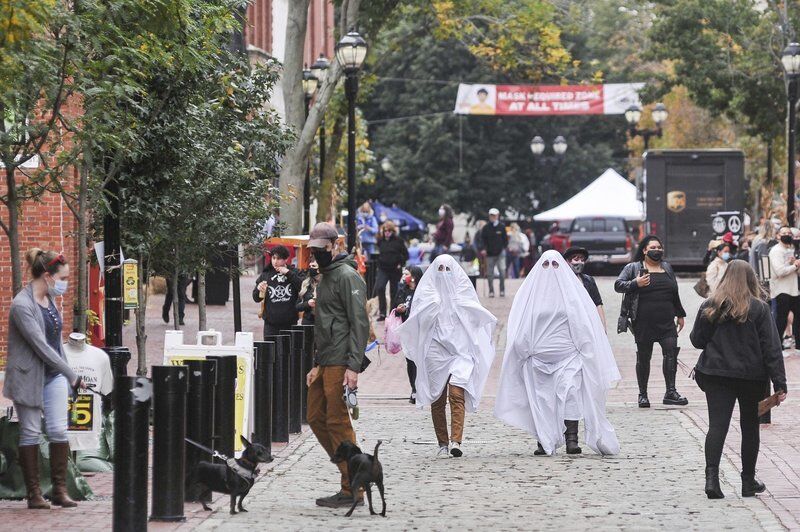 JAIME CAMPOS/Staff photoDominique Martino and Alyssa Pelegrino of Bristol, Connecticut, walk along a busy Essex Street in their ghost costumes as the city of Salem faces an influx of Halloween tourists despite the cancellation of Haunted Happenings amid the coronavirus pandemic 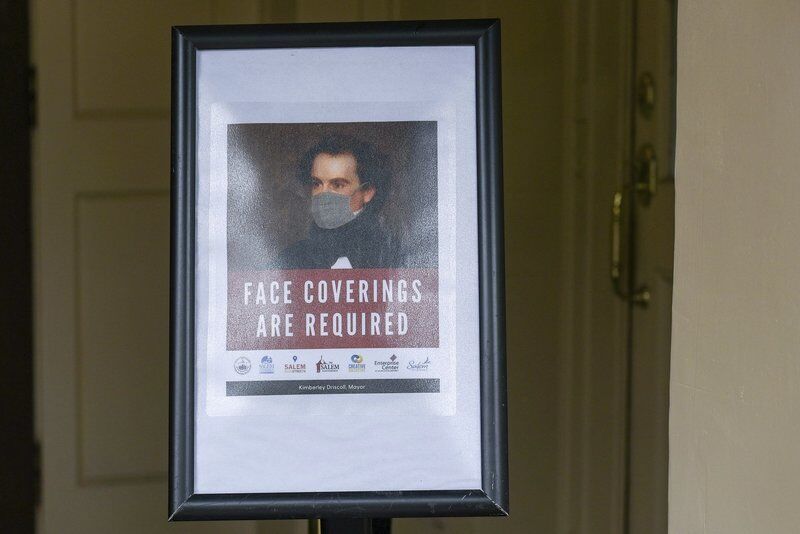 JAIME CAMPOS/Staff photoA graphic of Nathaniel Hawthorne wearing a protective mask stands outside the Hawthorne Hotel Monday. The sign is meant to remind passersby to wear their masks. 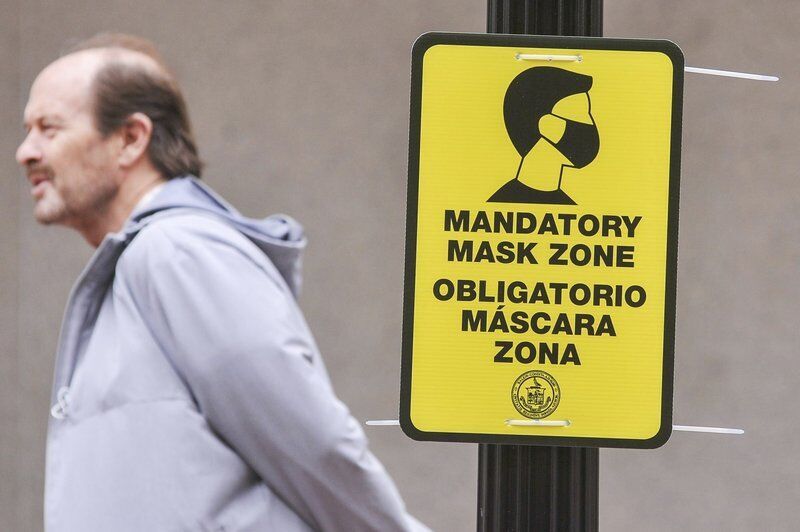 A man walks along Essex Street without a mask as Salem hosts Halloween during the coronavirus pandemic. JAIME CAMPOS/Staff photo

JAIME CAMPOS/Staff photoPeople walk along the sidewalk outside the Hawthorne Hotel Monday as Salem prepares for Halloween amid the coronavirus pandemic. For the first time in years, the hotel is not fully booked for Halloween, due to COVID-19.

Passengers are aboard a Salem Trolley on Monday.

JAIME CAMPOS/Staff photoDominique Martino and Alyssa Pelegrino of Bristol, Connecticut, walk along a busy Essex Street in their ghost costumes as the city of Salem faces an influx of Halloween tourists despite the cancellation of Haunted Happenings amid the coronavirus pandemic

JAIME CAMPOS/Staff photoA graphic of Nathaniel Hawthorne wearing a protective mask stands outside the Hawthorne Hotel Monday. The sign is meant to remind passersby to wear their masks.

A man walks along Essex Street without a mask as Salem hosts Halloween during the coronavirus pandemic. JAIME CAMPOS/Staff photo

SALEM — Despite its best efforts to divert the draw of Haunted Happenings tourists and protect residents amid a global pandemic, Salem is getting slammed by day trippers.

“If you had asked me in July, ... I would’ve said it is going to be a perfect time for locals to explore Salem and take advantage of having no crowds,” said Kate Fox, executive director of Destination Salem. “We were wrong. We were shockingly wrong, and we knew that Labor Day, when the city was so busy, and there were lines everywhere to get in the businesses.”

The Witch City was surprised over the weekend when thousands of visitors hit the area. Businesses limiting the number of people entering, a bid to keep customers and employees safe, caused clusters of lines to bunch up and collide on the Pedestrian Mall. A safety ranking tool that measures the size of crowds released by the city on Friday spent most of Saturday at the fourth of six levels.

“I was in the Main Streets’ information station for a couple hours on Sunday morning, and we helped a lot of people — a surprising number of people — coming without a plan,” Fox said. “They haven’t done their research. They’re just following their wanderlust to Salem, and that strikes me as really strange during a pandemic.”

Fox’s advice to such visitors was summed up in only two words: “Don’t come.”

“The last thing I want to say is ‘don’t come to Salem,’” Fox said. “Make the plan, build the itinerary, and come that way. And if people aren’t doing that, then this isn’t the year.”

This week, The Salem News is hosting a series of live conversations on its Facebook page dedicated to the city’s tourism draw during the COVID-19 pandemic. Two interviews on Tuesday focused on why travelers are still coming to Salem, while two interviews Monday discussed what crowds have looked like so far this season. The interviews can all be watched at facebook.com/SalemMANews.

Coming from all over

Typically, more visitors to the House of the Seven Gables come from out-of-state this time of year. And despite the pandemic, that’s also the case this year. New York remains the Gables’ top state for visitors, and second is New Jersey. Massachusetts is third, despite the current push for local tourism.

“We’re not hitting that New York and New Jersey market this year,” said Julie Arrison-Bishop, community engagement director at the Gables. “For better or for worse, a lot of what we’re seeing in terms of marketing is the success of marketing Salem as a community for years and years.”

And many are coming to Salem unprepared.

“They’re not all doing their homework,” said Tina Jordan, director of the Salem Witch Museum. “I actually spoke to a couple families this weekend that said, ‘it’s such a gorgeous day. We thought we’d take a drive up to Salem.’ I said, ‘did you check anything on the website?’”

By noon Saturday, many major attractions in Salem had completely sold out of tickets already limited to ensure guest safety. Jordan recalled speaking to a family at 1 p.m. Sunday that was “pretty shocked they couldn’t get into the museum.”

“There are huge Halloween enthusiasts, and Salem has captured everyone’s imagination,” Jordan said. “And not only that, but ‘Hubie Halloween’ on Netflix has been advertised, and there are shots in Salem. It’s the perfect storm, so to speak.”

Changes on the fly

Hawthorne Hotel, for perhaps the first time in years, isn’t fully booked for Halloween. That’s because the situation is changing regularly. Like the Gables, the Hawthorne gets many guests from New York and New Jersey. But this past week, New Jersey made the state’s restricted travel list. Now, anyone coming from the Garden State must quarantine upon arrival — or their plans must be scrapped.

“Momentum changes weekly based on what’s happening with the virus around the country,” said Claire Kallelis, Hawthorne Hotel’s general manager. “States become high risk and then drop down to low risk. It’s challenging for visitors and tourists that want to come to Salem, because all of the sudden, from nowhere, they could become a high-risk state again.”

The hotel is using electrostatic sanitizer applicators in high-touch and open areas every 30 minutes and sharply limiting elevator capacity. To get into the building, you must have plans to eat at a restaurant or get a room if reservations aren’t already locked in, Kallelis said.

“Ever-changing is the key here,” Kallelis said. “My team and I get together each week to say what we’ve done differently for last week, and what we need to do for the following.”

Just like visitors need to do their homework and tweak plans on the fly, the city needs to do so, too.

And it has been. On top of a crowd-reporting site launched last week, City Hall announced free downtown COVID-19 testing at Old Town Hall, 32 Derby Square, every Monday, Wednesday and Friday from 9 a.m. to 2 p.m. and Tuesdays and Thursdays from 3 to 7 p.m. Downtown testing runs from Oct. 8-30.

Officials are also pushing for businesses to adopt ticket reservation systems to keep lines from forming and colliding in the coming weekends.

“We saw lines in restaurants, shops, attractions,” Mayor Kim Driscoll said while discussing this past weekend. “Everyone had lines because they’re good, adhering to the limitations — but not good that they’re creating congestion at the establishments.”

“We’re really trying to reinforce — and we’ll be doing even more of this — visitor advisories about lines,” Driscoll said. “If you aren’t staying here in a lodging establishment, in a hotel, and don’t have any reservations at any attractions, you may want to save your trip for next year.”

On Wednesday, The Salem News will host its fifth conversation in its series of live streams on Halloween in Salem amid the coronavirus pandemic. At 10 a.m., Mayor Kim Driscoll will discuss plans her administration has put in motion to protect the city and other changes in play as Haunted Happenings roars into a long weekend. Watch live at facebook.com/SalemMANews.

Coming up later this week:

Thursday: What can residents do? From keeping tourists honest about wearing masks to helping point visitors in the right direction, what are some of the things residents can do to take ownership of the city’s health and safety this season?

Friday: The final night. What are officials expecting for Saturday, Oct. 31, and what are some of the discussions playing out now to manage the chaos of Halloween in an already chaotic pandemic?

This article has been updated since its original publication to correct days and times for free COVID-19 testing in downtown Salem. Testing will take place Mondays, Wednesdays, and Fridays from 9 a.m. to 2 p.m. and Tuesdays and Thursdays from 3 to 7 p.m. at Old Town Hall, 32 Derby Square. The free downtown testing runs from Oct. 8-30.

This past weekend, the first of five in October, tourists packed downtown Salem - a tradition in any other year, but a problem in COVID-domina…