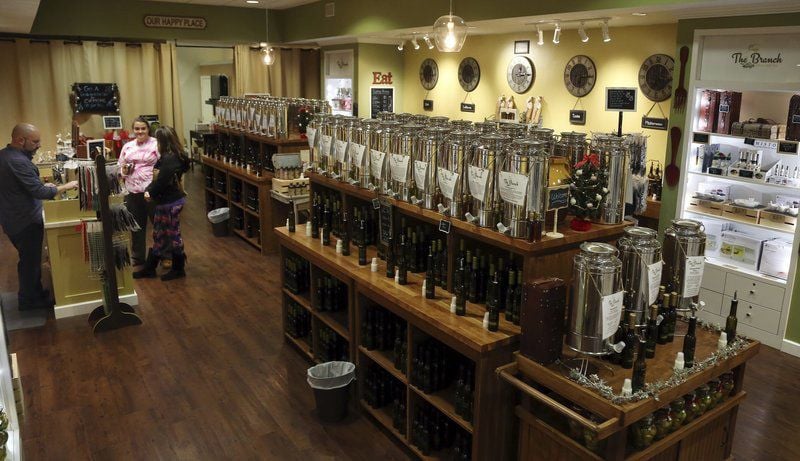 DAVID LE/Staff photosThe Branch Olive Oil Company offers a number of infused olive oils from around the world and balsamic vinegars from Italy. They are stored in fusti tanks and poured fresh for customers to taste and purchase. 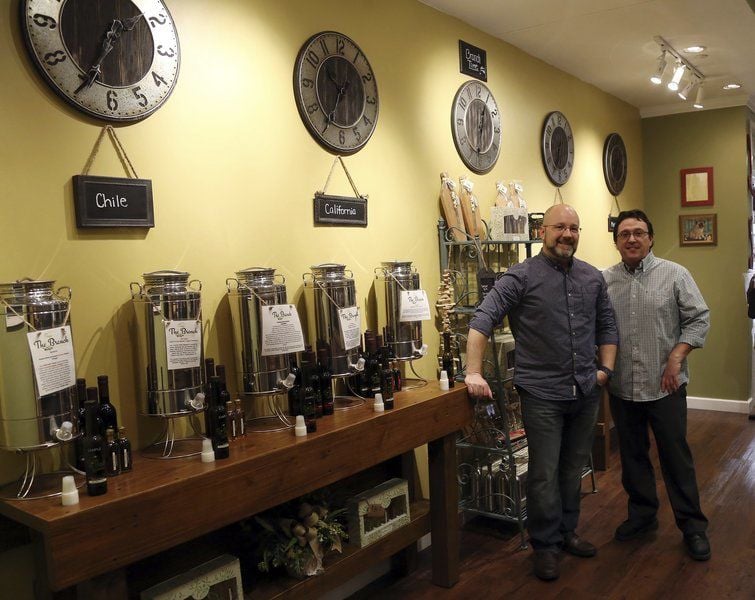 DAVID LE/Staff photoBusiness partners and Peabody natives Jerry Knox, left, and Corey Carter have recently opened The Branch Olive Oil Company in the Northshore Mall in Peabody on the lower level near Nordstrom. The store specializes in imported olive oils and vinegars. 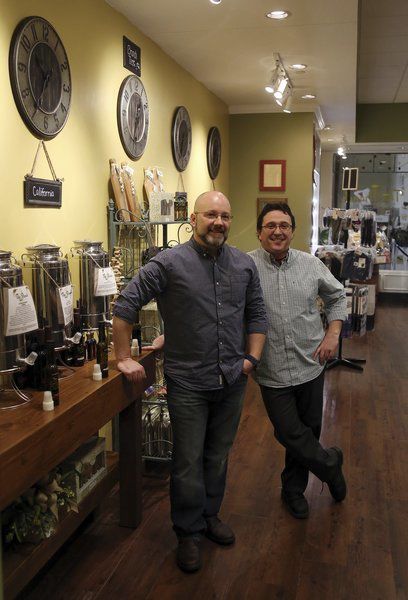 Business partners and Peabody natives Jerry Knox, left, and Corey Carter, recently opened The Branch Olive Oil Company in the Northshore Mall in Peabody on the lower level near Nordstrom. The store specializes in imported olive oils and vinegars.

DAVID LE/Staff photosThe Branch Olive Oil Company offers a number of infused olive oils from around the world and balsamic vinegars from Italy. They are stored in fusti tanks and poured fresh for customers to taste and purchase.

DAVID LE/Staff photoBusiness partners and Peabody natives Jerry Knox, left, and Corey Carter have recently opened The Branch Olive Oil Company in the Northshore Mall in Peabody on the lower level near Nordstrom. The store specializes in imported olive oils and vinegars.

Business partners and Peabody natives Jerry Knox, left, and Corey Carter, recently opened The Branch Olive Oil Company in the Northshore Mall in Peabody on the lower level near Nordstrom. The store specializes in imported olive oils and vinegars.

PEABODY — There are wine bars and breweries that offer tastings. Those looking for something stronger can even sample locally made hard cider and specialty rum.

Now, sampling of special concoctions has entered a new realm.

There are now four such fusti-infused shops in the region.

One of the latest additions opened in July, when a couple of Peabody friends took a shot with a tasting bar called The Branch Olive Company in, of all places, the lower level of the Nordstrom Wing at the Northshore Mall, next to Burtons Grill.

The Branch joins Newburyport Olive Oil Company, 50 Water St., Newburyport; Cape Ann Olive Oil, 57 Main St., Gloucester; and Cellar Door, 1 N. Main St., Ipswich as being culinary shops that have dozens of fusti tanks where patrons can sample flavored olive oils and balsamic vinegars from around the world before having them bottled fresh.

Denise Purcell, trend expert for the New York-based Specialty Food Association, said the oil and vinegar category has grown 22.2 percent between 2013 and 2015.

This category includes alternative oils in addition to traditional ones.

“Overall, consumers have become more sophisticated about what they eat, and they have grown to understand the differences and subtleties between oils, vinegars, coffees, teas, etc.,” Purcell said in an email. “They enjoy comparatively tasting them as you would wines.”

The owners of The Branch are Jerry Knox, 45, who has a 25-year history in retail; and Corey Carter, 44, a former Peabody firefighter.

“My wife is Greek,” Knox said, “so I have been around the oil part of it for a while. My in-laws live with me, now, so we kind of use that as a stepping stone. I got used to some different oils.”

Knox said he has sampled oils and vinegar in tasting bars in Maine, New Hampshire and on Cape Cod, and the pair became interested in opening one on the North Shore.

The store has 54 varieties of oils and balsamic vinegars in 10-liter fusti tanks.

“Our product is actually stored in here and we pour fresh from the tank as we fill our bottles,” Knox said. Customers can taste what they are buying before taking a freshly poured bottle home. “We try not to have too many bottles already filled because we like the consumer to see the whole process,” Knox said.

Finding and filling the right store location was difficult, because the store needed both foot traffic and good access as a destination store.

Many tasting bars are in downtown areas, so Carter and Knox decided to try a mall location, to give shoppers something different.

“And the mall’s been great, too, by the way,” said Knox, who said the mall’s management liked the idea of two local families opening a store there. The Branch has also developed a relationship with neighboring Burtons Grill, which uses some of their oils and vinegars, the owners said.

The friends self-funded the shop. Carter still works at gelatin maker Rousselot in Peabody, while Knox has made The Branch his full-time job. Their wives, Kristine Knox and Sharon Carter, also work in the store.

“The demand, the foodies are coming in,” Knox said, “and then, of course, we are getting a lot of people that are worried about the nutrition aspects of what they are eating and what they are putting into their bodies.”

The balsamic vinegar comes from Modena, Italy, and the oils that are infused come from Tunisia. The store’s extra virgin olive oil comes from all over the world: California, South Africa, Australia, Chile, Portugal, Spain and Italy.

Their supplier is Veronica Foods of California, a company that has been around since 1924. Many tasting bars will have a similar supplier, Knox said.

The olives have to be pressed within two to four hours of being picked.

“So, it’s the freshest oil you are going to find, anywhere,” Knox said.

“The product will sell itself, based on its taste and quality,” Carter said. Bottles range from $5 for a small bottle to $29 for a large wine bottle.

Katie Shernan said she was a human resources coordinator and her mother was a software sales executive when they purchased Newburyport Olive Oil Company in December 2014.

Both women had always wanted to own their own shop when Katie Shernan came across a listing to purchase Newburyport Olive Oil, which had been open for a year and a half before they purchased the store. Newburyport Olive Oil carries more than 70 specialty olive oils and balsamic vinegars.

“I love it,” said Katie Shernan, who lives in West Newbury. According to the store’s blog, Karen Shernan got her start in the food industry helping grow Bread and Circus in Cambridge.

The emphasis for the business has shifted as the space adjacent to them became available and they opened Port Plums, a high-end culinary and cookware store.

Why the popularity of such stores? Katie Shernan said some people are learning about the corruption within the olive oil trade, seeking quality olive oil they can’t find in supermarkets. People are also turning to specialty stores as they become more conscious of the health benefits of olive oil. Foodies like the taste of fresh oils and vinegars.

Inside the Cellar Door

Cellar Door in Ipswich, which has been open for about a year in a half, offers more than 20 varieties of olive oil and vinegar for tasting in its fusti containers.

The store was opened by Bruce Flynn and Bea Tiberii of Wenham, and while it has a range of products, including craft beer and wines, its tasting bars are one of its most prominent features. There’s 10-year aged balsamic vinegar from Italy, and a bacon-infused olive oil.

“We are doing well,” said Flynn, who said customers have been both health conscious while also seeking a variety of flavors to cook with.

“It gives you a chance to play around with things in the kitchen,” Flynn said of the flavored oils and vinegars.