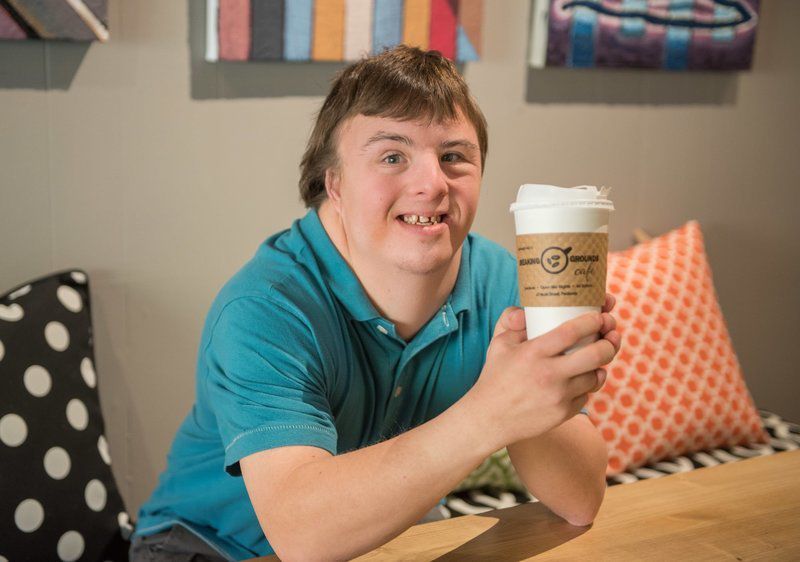 AMANDA SABGA/Staff photo.Chris Stark poses at Breaking Grounds Cafe in Peabody, where he worked to learn job skills. That led to a  job at Flatbread Pizza in Salem. Breaking Grounds just celebrated its one-year aniversary. 10/17/17 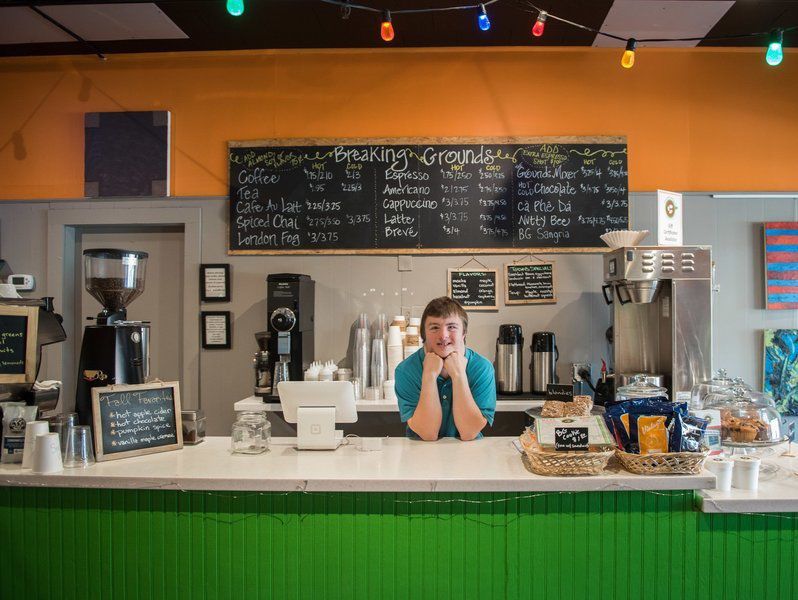 AMANDA SABGA/Staff photo.Chris Stark poses at Breaking Grounds Cafe in Peabody, where he learned job skills that led to a job at Flatbread Pizza in Salem. Breaking Grounds, which just celebrated its first anniversary, is run by Northeast Arc.10/17/17

AMANDA SABGA/Staff photo.Chris Stark poses at Breaking Grounds Cafe in Peabody, where he worked to learn job skills. That led to a  job at Flatbread Pizza in Salem. Breaking Grounds just celebrated its one-year aniversary. 10/17/17

AMANDA SABGA/Staff photo.Chris Stark poses at Breaking Grounds Cafe in Peabody, where he learned job skills that led to a job at Flatbread Pizza in Salem. Breaking Grounds, which just celebrated its first anniversary, is run by Northeast Arc.10/17/17

PEABODY — Working at Breaking Grounds led Christopher Stark to a job he loves with an unparalleled benefit: Free pizza.

The Main Street coffee shop, a training ground for people with disabilities run by Northeast Arc, celebrated its first anniversary on Wednesday.

Stark completed the Project Search program at Salem State University, also run by Arc, a nonprofit that helps disabled people become full participants in the community. Then he trained at Breaking Grounds for four months, before moving on to work at Flatbread Pizza in Salem in January.

But the pie isn't the only thing Stark loves about his job.

"Some people are the same age as me. I have nice bosses, I love to do cleaning and I think it's fun," he said. "I help and I do get some nice paychecks."

According to his mother, Joanne Stark, her 27-year-old also has experienced a confidence boost.

"It has been a great opportunity for him to grow as an individual and take pride in the fact that he's working and earning a paycheck every week, which he likes to bring home — an aspect that we all understand," she said. "He's very proud of himself."

His job coach, Michelle Lagergren, said the biggest challenge for Stark was leaving the friends he made at Breaking Grounds, both co-workers and customers. But his mother said he formed new friendships easily at Flatbread.

"He has been very happy. He was very happy working at Breaking Grounds as a skill builder, but it was also an opportunity to meet people, and it's the same thing with Flatbread," his mother said. "He's building skills, so it's definitely helping with resume building, with experience. And he's enjoying the people he works with, and it seems they really enjoy him."

Stark received a job offer at Flatbread and when his hours were increased there, it became his sole job.

"We just love having Chris there in the mornings. He does a good job and we're providing him an opportunity to be part of the team here. He gets along great with the staff," said Mike Brooks of Flatbread. "He likes to keep it light, too, which is refreshing. He has a good sense of humor, and he always comes in with an upbeat attitude."

The Arc operates the Breaking Grounds coffee shop in downtown Peabody along with four other businesses to train participants in areas they're interested in, including Shine Jewelry, Heritage Shredding, Heritage Concierge Services and Heritage Caning. They also use volunteering and internship opportunities to help individuals prepare for jobs.

The nonprofit is looking for locations to open a second coffee shop to enhance their operation. A total of 15 people have been trained over the past year at Breaking Grounds.

"What's great about Breaking Grounds is that it provides real-life, real-time training in a safe and secure setting," said Tim Brown, Arc's director of innovation and strategy. "It allows people to really explore and expand what they feel they're capable of doing."