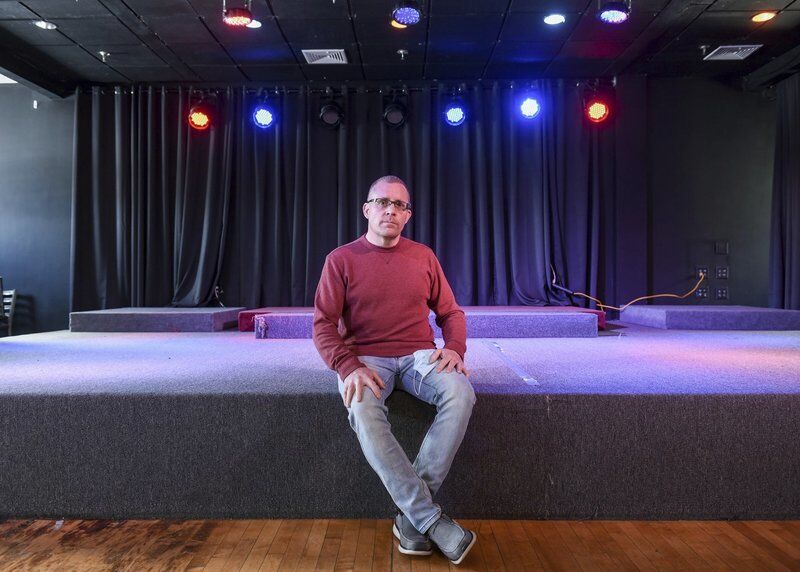 JAIME CAMPOS/Staff photoJoe Crowley sits on the empty stage of Breakaway, the restaurant, function hall and live music venue he owns on Route 1 in Danvers. Crowley said business has been down 83% due to the pandemic. 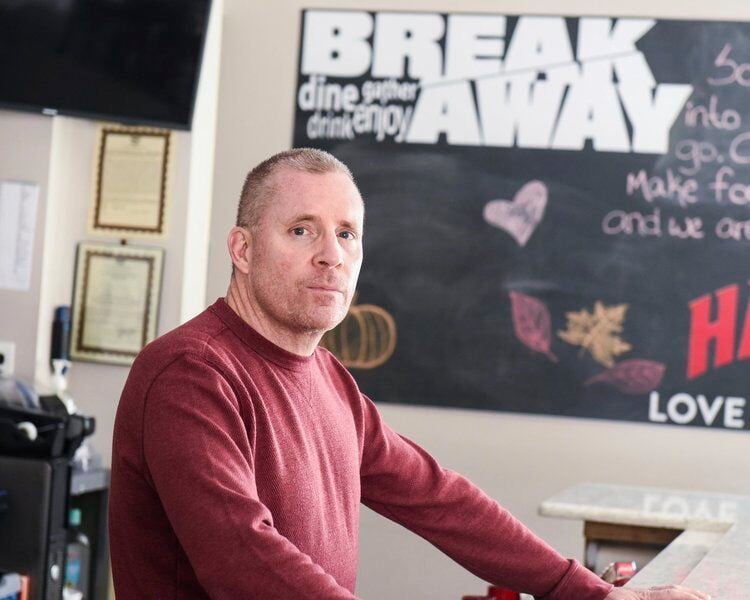 JAIME CAMPOS/Staff photoJoe Crowley, owner of Breakaway, a restaurant, function hall, and live music venue on Route 1 in Danvers, will receive more than $84,000 through a GoFundMe campaign run by talk radio host Glenn Beck. Crowley estimates he's lost $1 million worth in business due to private events cancellations during the pandemic.

JAIME CAMPOS/Staff photoJoe Crowley sits on the empty stage of Breakaway, the restaurant, function hall and live music venue he owns on Route 1 in Danvers. Crowley said business has been down 83% due to the pandemic.

JAIME CAMPOS/Staff photoJoe Crowley, owner of Breakaway, a restaurant, function hall, and live music venue on Route 1 in Danvers, will receive more than $84,000 through a GoFundMe campaign run by talk radio host Glenn Beck. Crowley estimates he's lost $1 million worth in business due to private events cancellations during the pandemic.

DANVERS — In a year in which Joe Crowley almost lost his business to the pandemic and his life to a heart attack, the call last month from the Glenn Beck show was, for the first time in a long time, a good surprise.

"I was blown away," Crowley, the owner of Danvers restaurant, function hall and music venue Breakaway recalled. "I was in tears."

Beck was telling him that he'd raised money for struggling business owners through a GoFundMe campaign and was offering to cover more than $84,000 in bills for Crowley's business, after learning about Crowley's situation through a local television news report and then an interview.

With business down 83% during the past year, a maze of sometimes conflicting and often inconsistently-enforced pandemic restrictions preventing him from re-opening, and no guidance or plan from the state, Crowley is at wit's end.

So when he read that state officials had quoted him as saying "they continue to fight" in a list of enforcement actions released last week, he was upset.

"We're doing anything but rebelling against the state," said Crowley. "We are frustrated."

"We have been completely compliant," said Crowley.

But the state's re-opening plan puts him way down the list on being allowed to re-open as a music venue, and to full capacity.

He tried offering outdoor music, only to get a visit from the state agency that oversees alcohol establishments. They told him there had been a noise complaint, he said.

Crowley has had to lay off 35 employees.

He's lost by his estimate 300 private events — weddings, showers, even music recitals — that cannot be held due to the pandemic, $1 million worth of business. He's issued $50,000 in refunds.

And while the state has given a rough estimate as to when he might be able to re-open, he's caught in another trap — his business functions on bookings, and without guaranteed dates, he can't book the acts.

"I don't think the people on the state level understand that," he said.

There are promises of more government funds to help small-business owners like himself. But once again, Crowley says, he's facing a quandary and can't get consistent information. A program that would provide assistance to shuttered venues appears at first glance to be a potential lifeline. But he can't get answers to even simple questions such as whether it will provide grants or loans or whether language that requires the venues to have seats that are "affixed" to the floor rules out his club.

Meanwhile, if he waits too long for information on that funding source, he might miss out on a chance to obtain payroll protection program loan funds.

And while all of that is going on, he's still getting utility and tax bills.

Not long before the donation from Beck, Crowley was thinking about cutting his losses and moving on.

Crowley has run a restaurant in Malden, Pisa Pizza, for almost three decades. Buying Breakaway five years ago was a dream come true.

But the call, and the arrival of the vaccines — and the support of hundreds of customers and his employees have kept him in the fight, he said.

He just wishes that there was a plan. And that every phone call or email didn't sound like something The Riddler from Batman would say.

"They just simply left us here to die," he said. "It's the first time in 28 years I felt abandoned ... please, give us a plan. Give us some direction."