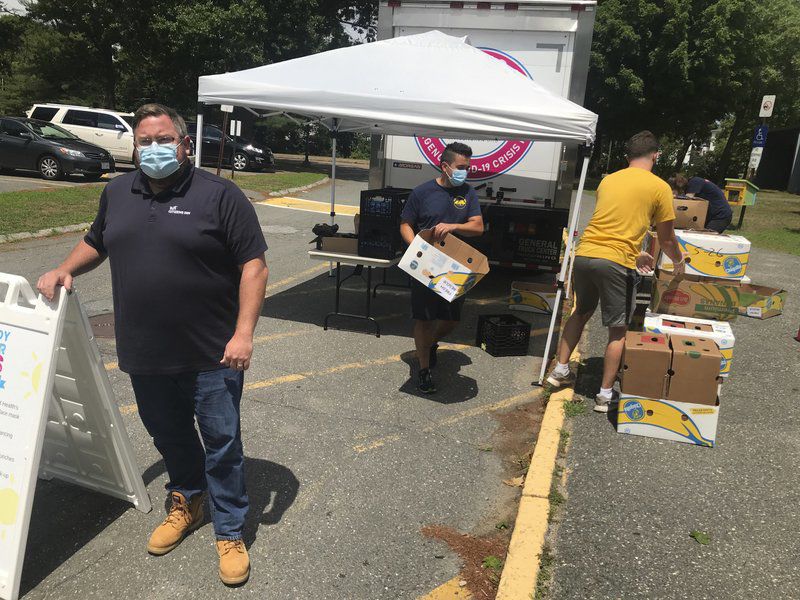 Ethan Forman/Staff photoCorey Jackson, executive director of Citizens Inn, talks about the city's summer meals program as operations manager Adam Neves and Dhimitri Qirjazi load up grab-and-go meals. With them is intern Caitlin Gleeson, who keeps count of the meals being handed out. 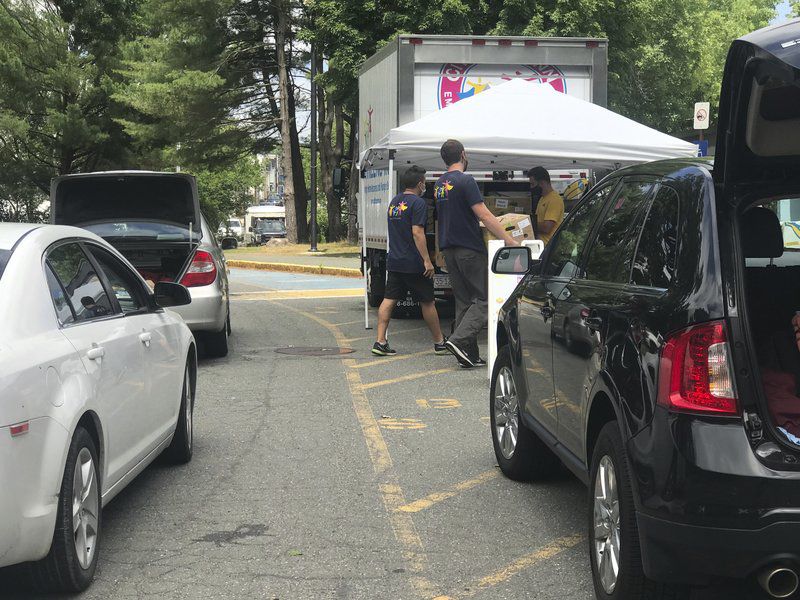 Ethan Forman/Staff photoCars on the left line up for Peabody's Summer Eats meals program for children ages 2-18 Monday at the Welch School.

Ethan Forman/Staff photoCorey Jackson, executive director of Citizens Inn, talks about the city's summer meals program as operations manager Adam Neves and Dhimitri Qirjazi load up grab-and-go meals. With them is intern Caitlin Gleeson, who keeps count of the meals being handed out.

Ethan Forman/Staff photoCars on the left line up for Peabody's Summer Eats meals program for children ages 2-18 Monday at the Welch School.

PEABODY — On Monday at noon, a steady stream of cars flowed into the Welch School driveway on Swampscott Avenue.

They were greeted by a small masked crew from Citizens Inn, which runs the Haven from Hunger food pantry on Wallis Street.

The crew was there as the need for children's meals in the city due to the pandemic has ballooned. Citizens Inn Executive Director Corey Jackson estimated that Peabody's Summer Eats Program will be giving out 2,000 to 3,000 meals a week through the summer, up from 160 in a typical year.

"We are really not sure where it's going to land yet," Jackson said.

A meals program normally held at the Peabody Institute Library on Main Street is expanding to library branches, schools and stops along Route 1.

One worker, Adam Neves, the operations manager for Citizens Inn Haven from Hunger, opened the refrigeration truck and quickly loaded a bag with five milks, five sandwiches, five grains and five fruits per child, plus a bag of groceries.

"I think it's amazing," said parent Marina Bettencourt, whose daughter attended the Welch School this past school year. "Kids are getting their nutrition in and it's a great way to help families."

Last week, the federally funded summer lunch program kicked off serving lunches at the Welch School on Mondays from noon to 2 p.m., the South Branch Library from noon to 1 p.m. on Tuesdays; and at various stops on Route 1 every Thursday from noon to 2:20 p.m., including mobile home parks, the McCarthy School and the West Branch Library.

Jackson said he expected about 400 families on average to come by the Welch School, with numbers of families declining a little bit over the summer but holding steady.

He expects the South Branch library will serve 50 kids and they are trying to get the word out about the stops along Route 1.

With the COVID-19 pandemic, they are seeing a lot of unemployed families, Jackson said. Many families are using Haven from Hunger for the first time — the program registered a 300% increase in the number of first-time families over the past year.

That need is also being seen in the summer lunch program, which is not based on income level.

"It's about the USDA getting out food to kids during the summer," Jackson said.

The No Child Goes Hungry in Peabody weekend backpack program is also helping to feed kids, in conjunction with Citizens Inn. The program is delivering bags of groceries to 313 households every Friday night, said Jarrod Hochman, the executive director of the program and a member of the Peabody School Committee.

The U.S. Department of Agriculture sponsors the meals program, run through the Massachusetts Department of Elementary and Secondary Education. The program reimburses Citizens Inn per meal.

"It doesn't cover everything," Jackson said. "We need to fundraise in order to cover the expenses above and beyond, but it goes a long way to be able to do this at this scale."

Citizens Inn got a waiver from the federal government to operate in other parts of the city, not only where census data indicates the need is the greatest. That means being able to run a refrigerated truck along a route by mobile home parks were 166 children live.

Other North Shore school districts are providing meals for kids this summer.

"We are working collaboratively with the Danvers Senior Center and (Director) Pam Parkinson through Project Bread, Meals on Wheels and other community volunteers, that are taking on summer lunch service for both students and other residents in need," Keith Taverna, assistant superintendent of finance and personnel for Danvers Public Schools, said in an email. "We have seen an uptick compared to last summer on need but a decrease compared to the need in March."

Beverly Public Schools Food Service Director Christina Leal said numbers of those seeking meals is down from the height of the pandemic in March.

"We are still feeding a good amount of families that come through," Leal said of the summer meal pickup on Tuesdays and Fridays, 10:30 a.m. to 12:30 p.m. at Beverly High, and 11:30 p.m. to noon at Apple Village and Holcroft Park. This summer, they are seeing 160 families on Fridays and 120 on Tuesdays.

Salem Public Schools Chief of Public Relations Liz Polay-Wettengel said the schools numbers remain steady at 11,000 to 13,000 meals per week in addition to the Farmers to Families food boxes.

Who is eligible: Each Peabody child ages 2 to 18 will receive five grab-and-go lunches. Children do not need to be present, but customers need to wear a mask and adhere to social distancing guidelines. The program is federally funded in partnership with No Child Goes Hungry in Peabody and the Peabody Institute Library.