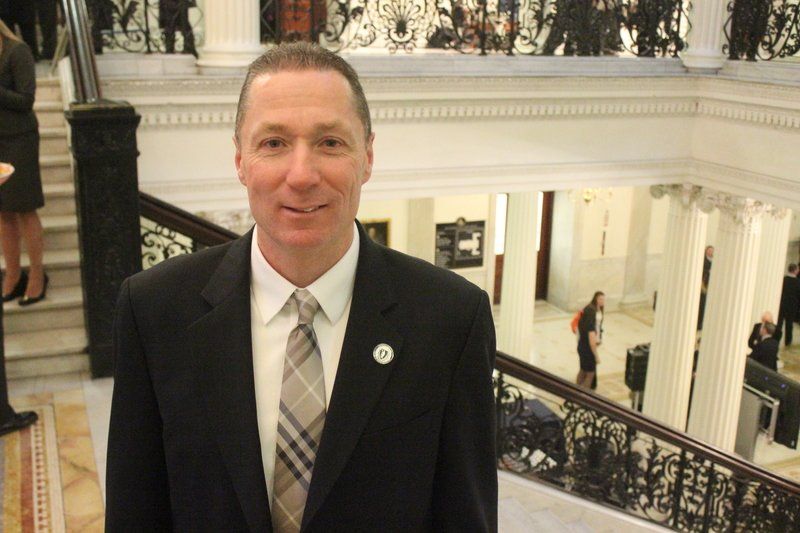 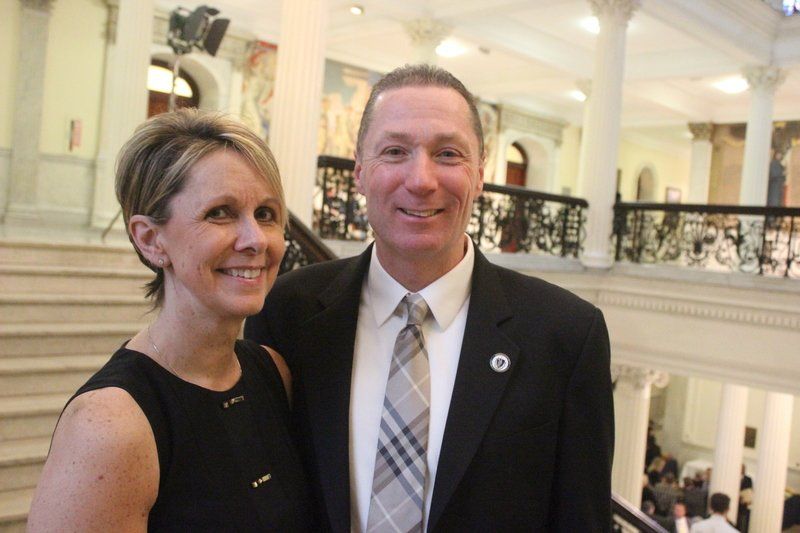 Boston: Newly sworn in Salem state representative Paul Tucker and his wife Ann are all smiles at the State House following Wednesday's opening session of the Legislature for 2015. Staff Photo/Alan Burke 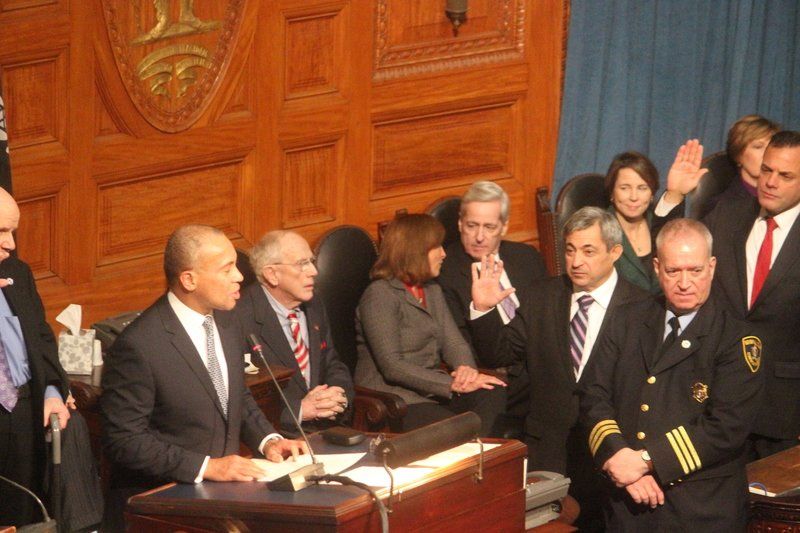 Gov. Deval Patrick, left, gives the oath of office to members of the House of Representatives, in one of his last acts as governor. Looking on, standing to the governor’s left, is Danvers State Rep. Ted Speliotis, a member of the leadership.

Boston: Newly sworn in Salem state representative Paul Tucker and his wife Ann are all smiles at the State House following Wednesday's opening session of the Legislature for 2015. Staff Photo/Alan Burke

Gov. Deval Patrick, left, gives the oath of office to members of the House of Representatives, in one of his last acts as governor. Looking on, standing to the governor’s left, is Danvers State Rep. Ted Speliotis, a member of the leadership.

BOSTON — Paul Tucker made the leap from the station house to the Statehouse on Wednesday.

The former Salem police chief was sworn in as the city’s new state representative in a ceremony led by outgoing Gov. Deval Patrick.

”I’m as excited as anyone could be,” Tucker said.

Tucker told the News that he’s marked out education and uses for the former Salem power plant site as issues he intends to pursue on Beacon Hill. In addition, he’s hoping to find his way onto the committee for public safety and homeland security, an assignment that would play to his strengths as the former chief.

In a time-honored ritual, members of the House were sent to escort the governor to the chamber. Outgoing Gov. Deval Patrick was smiling, shaking every hand offered as he entered the Great and General Court. He was greeted with sustained and boisterous applause.

Incoming Gov. Charlie Baker of Swampscott had visited the speaker’s office earlier in the morning.

Tucker took the oath with his wife Ann, his three children, Danny, Meghan and Shannon, and new grandchild Abigail looking on.

”Everybody in the family is very excited for me,” he said, mentioning his wife particularly. A legislator has a lot of demands on his time and his psyche, he said, but as the wife of a police officer Ann has already shown an ability to deal with significant stress.

One awkward element of the ceremony was the introduction of two former house speakers, both seated on the elevated platform behind the rostrum with the newly sworn attorney general Maura Healey between them. Both Charlie Flaherty and Tom Finneran are convicted felons. The most recently retired speaker, Sal DiMasi, was absent while serving time in a federal prison on corruption charges. The current speaker, Robert DeLeo, was named as an unindicted co-conspirator by the U.S. Attorney in the recent probation department scandal.

Tucker had resolved before Wednesday morning’s Democratic Party caucus that he would support returning DeLeo to the speakership.

”I’m a new member,” Tucker said. Changes may come in the future, he said, but for now “I’m looking ahead.”

In preparation for his new position, Tucker attended a three-day seminar at the University of Massachusetts. “We touched on all the important topics.”

He came away with a positive view of DeLeo. “I’ve had a few discussions with the speaker,” he said in an interview prior to his swearing in. “He’s very familiar with Salem. … And I found him very accommodating. … I found the speaker to be interested in many of the same things I am interested in, like helping the citizens.”

With an overwhelming majority in the chamber the Democrats easily voted to retain DeLeo as speaker.

Meanwhile, Tucker said he is struck by the collegial atmosphere in the House. His fellow representatives have been welcoming and supportive. Further, he brings an appreciation of the history connected to the Statehouse, site of one of the world’s oldest continuing democracies.

”It’s just a glorious building,” he said, “an exciting place.”

A Salem native, Tucker succeeded the retiring John Keenan. He expects to be a full-time legislator. He plans to establish visiting hours for constituents in Salem and will ask Mayor Kim Driscoll for space in City Hall to hold office hours.

BOSTON — Sen. Bruce Tarr easily won another term as leader of the state Senate’s minority Re…

Peabody - Dorothy A. Gobiel passed away unexpectedly on Monday, January 10, 2022, at the age of 86. She was born November 6, 1935, in Boston to Domenic and Mary (Orlando) Correale. Dorothy has six siblings, brothers Ralph, Tony, and Domenic (Junior) Correale; and sisters Phyllis Curtis, Carm…