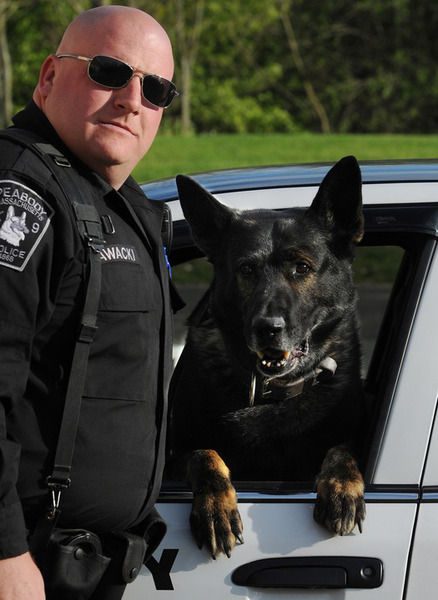 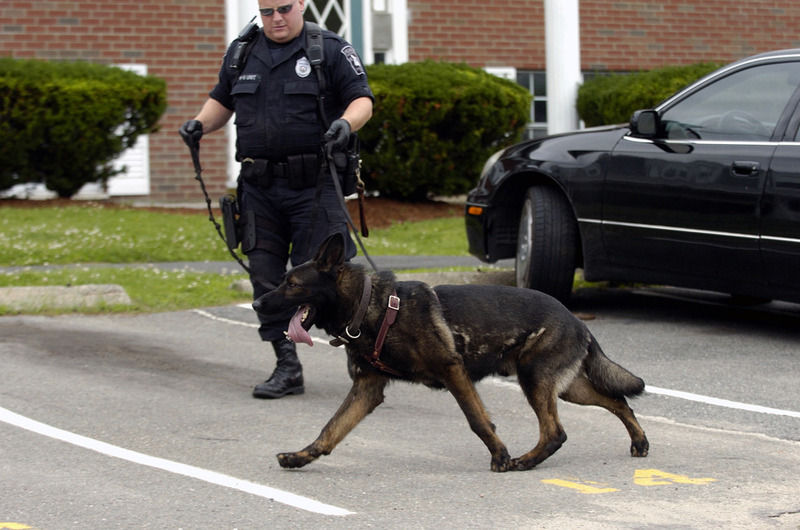 Sgt. Argo, with handler Peabody police Sgt. Eric Zawacki, gets a scent of a suspect during an incident on Keys Drive in 2004.

Sgt. Argo, with handler Peabody police Sgt. Eric Zawacki, gets a scent of a suspect during an incident on Keys Drive in 2004.

PEABODY — He was in many ways the perfect police officer.

“He’s the only cop I ever met in 30 years on the job,” said Peabody Deputy Chief Marty Cohan, “who always came to work, did what he was told and didn’t ever whine about it.”

He was certainly the best Peabody officer on four legs. Sgt. Argo, who served 10 years as the department’s police dog, died on Thursday of a spinal nerve condition at age 13. The station flag was lowered to half staff in his honor.

The sable German shepherd had been retired the last few years and lived with his handler Sgt. Eric Zawacki and his wife Detective Stephanie Lane. “It’s been a tough couple of days,” said Zawacki. “I lost my best friend yesterday. I lost my partner, the best partner I ever had. ... He was a fantastic dog. We were lucky to have him.”

But if potential bad guys don’t speak Czech, neither did any Peabody officers. Fortunately, at the time, the city’s Community Development Department included planner Vera Kolias, a Czech speaker, who offered assistance.

Thereafter, Argo adjusted quickly to the job. “He was a tracker. And a sniffer,” said Cohan. In other words, he could follow the trail of a missing person — like a patient who wandered away from the nursing home — or track down a car theft suspect through Peabody backyards, as he did in May 2010.

Argo could also seek out drugs. “He was all nose,” Cohan noted. Additionally, he could take care of himself.

“He had a powerful presence about him,” said Zawacki. “He loved working more than anything else. ... He had no fear. He was here to keep us safe. He was an incredible asset to the department and the City of Peabody.”

“A couple of people challenged him over the years,” said Cohan. “They lost.” Argo was extremely strong as Cohan learned through his habit of bringing him regular treats. An overly anxious Argo, seeking his treat, once knocked the deputy flat.

In addition, Argo was a kind of goodwill ambassador for the police. Police officers and most of the public have in common, said Cohan, an affection for dogs. Argo went to DARE camp and won over the kids. “He was as near to perfect as you could want,” some said.

“He was a pet. A pal. And partner,” said Cohan. He also accomplished something that humans often have difficulty with — putting the stress of the job behind him at the end of the day. “At home he was a normal dog.”

Argo adjusted easily to two other Zawacki dogs, a Labrador retriever and a terrier. The biggest problem was adjusting to retirement. In latter years, when Zawacki put on his uniform to leave for work each day he left behind a crestfallen Argo clearly wondering why he couldn’t go anymore. “For 10 years he had gone with me. ... They live for work.”

Zawacki recalled that he wanted the department to have a dog from the moment he got on the force. Eventually came the opportunity to bring Argo aboard. And Peabody’s success with its dog, he believes, inspired others, including Salem and Danvers, to do the same.

“I did a whole lot of mutual aid with surrounding communities,” Zawacki explains. “They got to see a great dog working.”

Now, the department is without a police dog and he’s hoping at some point to find a successor for Sgt. Argo. Given the impact this officer had on his colleagues it won’t be easy to replace him.